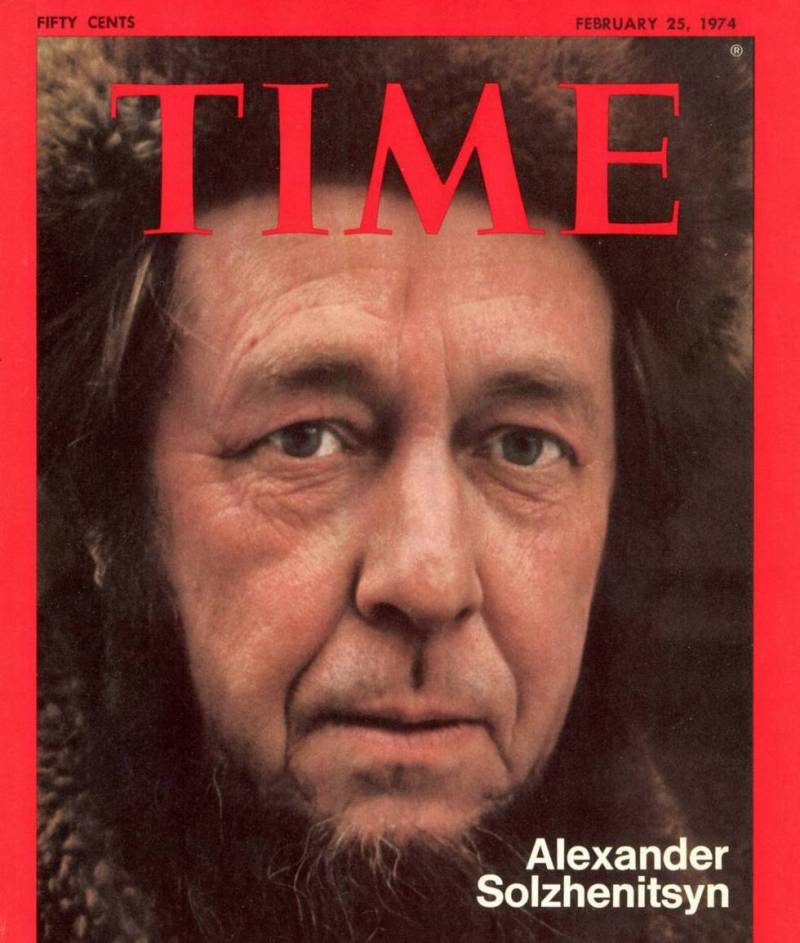 One of the most famous liars and creators of the myth of the "bloody stories"USSR is Solzhenitsyn. He became famous thanks to Western media in the late 1960-s, who actively used his book "The Gulag Archipelago".


Alexander Solzhenitsyn himself was arrested in 1945 for counterrevolutionary activities, which resulted in the distribution of anti-Soviet materials. Solzhenitsyn was sentenced in absentia to the 8 years of forced labor camps and eternal exile at the end of his sentence. Released in February 1953.

According to the anti-Soviet, the war with Nazi Germany could have been avoided if Moscow reached a compromise with Hitler. Solzhenitsyn personally condemned Stalin for the terrible consequences of the war for the peoples of the USSR, and more than for Hitler. It turned out that the author sympathized with the Nazis.

Since 1962, with the permission of Khrushchev, who pursued the policy of de-Stalinization of the USSR (the so-called "perestroika-1" or "thaw"), Solzhenitsyn began publishing in the USSR. The story entitled "One Day of Ivan Denisovich" was published in the journal "New World" and immediately reprinted and translated into foreign languages. December 30 Solzhenitsyn's 1962 was admitted to the Union of Soviet Writers. Solzhenitsyn deliberately "unwound" in the Soviet Union and in the West. Khrushchev used the writer's materials as a ram to destroy the Stalinist heritage. At the same time, when in the USSR they cooled to him (Khrushchev was removed from power and his “excesses” were tried to be eliminated), his popularity was preserved in the West. Solzhenitsyn’s books began to be printed in the West in huge editions, and a rather mediocre writer was promoted as a world star. The author has become one of the most valuable tools of Western imperialism (predatory capitalism) for the criticism and destruction of socialism. In the 1970 year, Solzhenitsyn was nominated for the Nobel Prize in Literature, and as a result the prize was awarded to him. Only eight years elapsed from the first publication of Solzhenitsyn’s work to the award of the award — there was no such thing in the history of the Nobel Prize for literature either before or after. In February 1974, Solzhenitsyn was arrested, charged with treason and deprived of Soviet citizenship. He was expelled from the USSR (for more details on the article: Why did they create the myth about the great writer-truth-worker Solzhenitsyn).

In the West, his work was used to the fullest to expose the "horrors" of the Red Empire. Solzhenitsyn was often invited to speak at influential meetings. The writer advocated building up the power of the United States and NATO against the USSR. In his speeches, Solzhenitsyn sharply criticized the communist regime and ideology, urged the United States to abandon cooperation with the USSR and the policy of detente. The writer perceived the West as an ally in the liberation of Russia from "communist totalitarianism" (a continuation of the ideology of the White movement during the Civil War).

After the death of the Spanish dictator-caudillo Franco, the fascist regime in Spain staggered. Strikes and demonstrations began in the country with demands for freedom and democracy, and Franco's heir, King Juan Carlos, was forced to start a reform policy. At this difficult moment, in March 1976, Solzhenitsyn visited Spain. In a loud speech on Spanish television, he approvingly spoke of the recent regime of Franco and warned Spain against "too quickly moving towards democracy." He also said in an interview that 110 of millions of Russians had died, becoming victims of socialism, and compared the “slavery to which the Soviet people are subjected” to the freedom enjoyed by the Spaniards. It is worth noting that the support of Spanish fascism led to increased criticism in the Western press Solzhenitsyn. The writer began to disappear from public view. There is a limit to everything, the ideas of fascism at that time were not supported in the West. The offensive of the neolithic ideology began.

Thus, Hitler's accomplices, American Nazi and media tycoon William Hurst, Anglo-American intelligence officers and professional propagandist (information warfare specialist) Robert Conquest became the most valuable pillars of Western myths about millions allegedly exterminated in the Soviet Union during the "bloody dictator" of Stalin. and anti-Soviet Alexander Solzhenitsyn. Among them, Conquest played a leading role, as he was a first-class disinformation specialist. At the same time, Conquest received tremendous informational support from Solzhenitsyn and other minor figures. Such as Andrei Sakharov and Roy Medvedev.

All statements by "researchers" like Conquest and Solzhenitsyn about the millions who were shot, dead and placed in camps have one thing in common - the lack of a scientific base. They are the result of false statistical and evaluation methods. Millions and even tens of millions of victims came up with the forgers and their followers. In doing so, they used data (mainly opinions) of such obvious enemies of the Soviet power as the German and Ukrainian Nazis (the Nazis and Bandera). The Western propaganda machine used them, as it led the information (cold) war against the Soviet Union. Check the information did not, this was not necessary. In the West, and now all over the world, the media (most often the means of mass disinformation) form the worldview of a simple man in the street. The myth of the “bloody Stalin”, the Soviet “evil empire” was necessary, and it was created. Used for this bikes of the Nazis, the Ukrainian Nazis, anti-Soviet, like Solzhenitsyn, attracted propaganda professionals such as Conquest.

Conquest, Solzhenitsyn, Medvedev and other opponents of the USSR used statistics published in the Soviet Union (for example, the population census), to which the authors added the estimated population growth without taking into account the general situation in the country. In this way, a conclusion was obtained on how much the population should be by the end of this period. People who are missing are enrolled in dead or imprisoned camps. The technique is simple, but false. Moreover, this method is not used in Western countries, as it would cause a protest by local historians and the public. It is allowed only for the USSR.

According to Conquest (estimate of 1961 of the year) in the USSR, 6 million people died of starvation at the beginning of the 1930s. This number in the 1986 year, he increased to 14 million. According to the Anglo-American writer, the GULag contained 5 million people in the 1937 year, on the eve of the “great purge” in the party, the state apparatus and the army. After the purges, during the period of 1937 - 1938, another 7 million people added to it, that is, there were 12 million prisoners. In the 1950, the USSR also had 12 million prisoners. And all 12 million, according to Conquest, were political prisoners. There were also ordinary criminals in the camps, who outnumbered the political ones in number. That is, in Soviet prisons and camps sat 25 - 30 million. According to Conquest, 1 million political prisoners were exterminated in the period of 1937 - 1939, another 2 million people died of starvation. Total for the period 1930 - 1953. the Soviet regime allegedly exterminated at least 12 million political prisoners. By attaching the starving people to these data, Conquest derived the total number in 26 of the millions who were killed by the Bolsheviks.

Solzhenitsyn used a similar technique. However, he cited even more terrible figures. Solzhenitsyn agreed with Conquist's estimate of 6 million starving to death. Since the purges of 1936-1939, in his opinion, 1 million or more people died a year. As a result, from the moment of collectivization until the death of Stalin in 1953, the communists allegedly killed 66 million people. In addition, he blamed the Soviet government for the deaths of 44 million people during the Great Patriotic War. That is, Moscow was to blame for the war and its terrible consequences, not the Nazi regime in Germany, the fascist-nationalist governments in Europe and the real warmongers in London and Washington. Solzhenitsyn concluded that the communists killed 110 million people. At the same time, 1953 million people were in labor camps in 25.

Thus, these fantastic figures are the result of the information war of the West against Russia-USSR. This is a well-paid falsification (including due to popularity), behind which there are Western special services, mainly American and British.

It is interesting that when, during the period of publicity under Gorbachev, previously secret archives were opened for researchers, the true face of the falsifiers was revealed, but nothing changed for the world community. Stalin remained a “bloody dictator,” and the USSR, an “evil empire.” Archives opened research reports based on authentic documents. Millions of "tortured and repressed" disappeared. However, the “free” Gorbachev press, and the world media, and publicists who speculate on the topic of repression, immediately lost interest in the authentic figures. They were published in scientific journals, but they were short-circuited and were ignored in the major media. In the West, the reports of Russian researchers on the penal system under Stalin were also ignored.

As a result, up to the present, the myth of tens of millions of murdered and repressed, innocent victims of Stalinism dominates the world community. A similar picture is in the Russian leading media, which continue to promote pro-Western, liberal-democratic values. In fact, the media form a picture of the “damned Soviet past” for an ordinary person, and idealize the history of the Russian Empire. At the exit - a pro-Western-liberal, semi-feudal-semi-capitalist, and semi-colonial model of modern Russia, dependent on the West. It is clear that on such a foundation no “sovereign democracy” is in principle possible.

The myth of the "bloody genocide of Stalin" in Ukraine