NATO summit in Chicago: a lot of noise - little efficiency 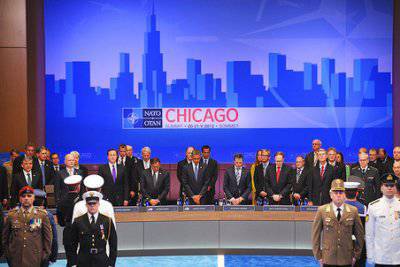 The noise around the NATO summit in Chicago is gathering momentum. The participants of this forum decided to touch on literally all the urgent issues and tasks that need to be addressed today. However, it is one thing to touch, and it is quite another thing to begin a real solution to them.

The cornerstone of the NATO summit is a phased adaptive approach to the deployment of a European missile defense system, which obstructs Russia. It is precisely this problem that obviously influenced the fact that the most senior official who turned out to be at the Chicago summit, representing Russia, is Mr. Kabulov, the special representative of the President of the Russian Federation for Afghanistan. By this, the Russian leadership has made it clear that at this stage, the only point of contact with the Alliance, which still looks promising, is the solution of the Afghan problem. The situation with the European missile defense system, which does not move from a dead center, forces the Russian leadership to more soberly assess the steps for contacting the North Atlantic alliance.

By the way, at the NATO summit, not only the Russian president and the prime minister (which was known in advance), but also some other personally invited guests did not wait. For example, they decided not to honor Chicago with their visit also decided by the top leaders of the countries of Central Asia. In particular, the ministers of internal affairs came from Kyrgyzstan, Kazakhstan, Uzbekistan and Tajikistan to meet with representatives of NATO, although the heads of these countries were invited. It is quite obvious that the presidents of the Central Asian republics decided not to provoke Russia after the CSTO summit, which was recently held in Moscow, and show foreign policy priorities, at least in terms of security.

Such a move also somewhat puzzled the representatives of the top leadership of NATO, because in recent years they have somehow lost the habit that the leaders of certain states have denied something to the Alliance. In general, it is safe to say that the Chicago meeting once again shows that today NATO is turning into an organization that really lags behind reality and tries to continue living in a frighteningly conservative field of relations to other countries of the world. Apparently, NATO still cannot understand that the unipolar world that the North Atlantic Alliance is trying to build and maintain with all its strength is absolutely unable to provide security on the planet, as evidenced by a series of ongoing conflicts, most of which were provoked by the Alliance itself .

Regarding the demarche of Russia after the European missile defense consensus was not found, today there is no single position even within the Alliance itself. Secretary General Rasmussen decided once again for the Russian Federation to “provide guarantees of non-directionality” of anti-missile missiles, which will be deployed in Eastern Europe. Moreover, the provision looks at least unintelligible, since no documents confirming the words of the NATO Secretary General of the Russian delegation have been transmitted. Apparently, this is what Washington once called “legal guarantees” to Moscow. If so, then it turns out that the words of Anders Fogh Rasmussen a priori in the Alliance have legal force ... Then it is not at all clear why NATO needed to accept any internal declarations and agreements, after all Rasmussen said - Rasmussen did. But agreements and declarations have a place to be, which means that, after all, the words of Rasmussen are not the primary truth even within the Alliance itself.

Once again, NATO has raised concerns that Russia is “incorrectly” responding to the deployment of the European missile defense segment. Attempts to establish missile systems in the Kaliningrad region at the summit in Chicago were again called a meaningless waste of money from Russia. At the same time, the installation of radar and anti-missile systems in Bulgaria, Poland, Romania, as well as off the coast of Norway and Spain, whose economy (Spain), by the way, breathes its last, for some reason, NATO does not fall under the classification of mindless spending ... but no one at NATO says a word about how much money will be spent on deploying missile defense facilities in Europe for Europe itself, which a couple of days ago at Camp David it was decided “not to leave in financial trouble”. And then - on you! - New billions on some ghostly "interceptor missiles." Nobody at the summit said why building a shield for modern ICBMs in Eastern Europe, which appear in Iran (only for the sake of which all this porridge is supposedly brewed) is not even in the project for the medium term ... Why are these costs which certainly with all responsibility can be called thoughtless and unproductive ...

There is, one must admit, in the West those people who, like Moscow, cannot understand why, if NATO is really building its anti-missile shield, fearing the aggression of Iran or North Korea, not to conclude real agreements with Russia. Wolfgang Ischinger, who once worked as deputy foreign minister of Germany and was the German ambassador to the United States, speaks about this in particular. He is sure that it is absolutely impossible to ignore Russia's concerns, as well as trying to show that the West does not want to make concessions only because Putin has again come to power in Russia. Moreover, Ischinger recommends that NATO pay attention not only to real and productive interaction with Russia, but also to what is happening inside the Alliance itself. And here the differences are more than enough. Not only did the rather obvious friction between Turkey and Greece over the status of Northern Cyprus continue, between Turkey and France in connection with the law banning the denial of the Armenian Genocide in the Ottoman Empire in the Fifth Republic, but also added fuel to the fire directly at the summit Chicago new french leader francois hollande. He spoke in the spirit that already this year the French contingent intends to withdraw from Afghanistan without taking into account any agreements that were concluded under Nicolas Sarkozy. Thus, Hollande clearly makes it clear that he is ready to fulfill his election promises, and not to let them down on the brakes, as other politicians from the same North Atlantic alliance often do.
But this is not all the differences within the atlantists. Former high-ranking US official Nicholas Burns literally demanded from the Alliance that Germany actively participate in NATO operations. He openly stated that Germany, being the leading European economy, is now taking on a too passive role, although, according to Mr Burns’s personal opinion, it could be an example to follow among all European countries that are members of the Alliance. The ex-official designates his claims in the following way: Germany even abandoned the active phase of the operation in Libya, when other members of the Alliance participated in this operation. Apparently, according to Burns, such a move of Mrs. Merkel is nothing more than an attempt to simply enroll in NATO, but not to solve the questions that the “chief planetary chief of police” puts before the Alliance. They say that only Balts can register with us, but with Germany such a focus should not take place.

So far, there has been no official comment from the German leadership on Mr. Burns’s statement, but the fact that such statements are taking place, as well as the tough stance of Francois Hollande, denoting his conditions for France’s participation in the Alliance’s operations, is a sign fact.

However, while Rasmussen decided not to escalate the situation and pretended that "everything is calm in NATO." But again he found a reason to look for a reason to talk about Russia. And the reason, as expected, was found instantly. NATO decided to "advise" Russia on an urgent basis to refuse recognition of Abkhazia and South Ossetia ... They say that Georgia has long been demonstrating a peace-loving attitude towards these republics, and Russia is still "gnashing its teeth." However, all these councils, the Russian side, as they say, have carefully studied and made their own conclusions regarding the “peacefulness” of Saakashvili and the withdrawal of signatures on documents under the words recognizing the independence of states. By the way, in response, high-ranking officials of the Alliance can be advised to refuse to recognize the independence of Kosovo, because Serbia is not less peaceful towards Pristina than Georgia is towards Tskhinvali or Sukhumi ...
Not forgotten at the summit in Chicago and the "poor relatives" of the Alliance - the Baltic countries. Despite the fact that the number of the American contingent in Europe will systematically decrease, which caused a considerable panic in Vilnius, Riga and Tallinn, the Baltic “brothers” Alliance promised to retain the so-called air police. Now the clear skies of the Baltic republics will be protected ... attention: Polish-made Russian-made aircraft (MiG-29) ... Admittedly, the joke from Rasmussen was a success. The Baltic leaders would be even calmer if they were to entrust the protection of their air spaces to the Russian air force itself. Why? Not a bad idea ... Yes, and Iskander Kaliningrad would have Lithuania, Latvia and Estonia "covered" ...

In general, the Chicago meeting of "old friends" once again demonstrated to the world that it was high time for general cleaning in this house called "NATO", because there is enough debris not only in its dark corners, but also in more prominent places. Yes, and responsible tenants, too, would order the Alliance itself, because the old song about Russian aggression somehow fed up with even many of those who belong to this Alliance.