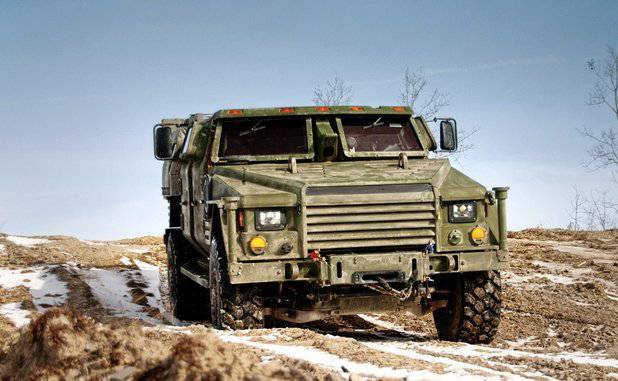 After years of debate about replacing a high-mobility multipurpose wheeled vehicle (High-Mobility Multipurpose Wheeled Vehicle) or Humvee, it appears that the Joint Light Tactical Vehicle (JLTV) program is finally approaching a prototype and testing phase that could lead to orders from the army The US and Marine Corps are more than 55000 vehicles.

The final document issued by the MoD in January states that two versions of the car will be built. A tactical combat vehicle (Combat Tactical Vehicle, CTV) will have four seats and will be able to carry 1500 kilograms of cargo, while a Combat Support Vehicle (CSV) will be able to carry two fighters and 2300 kilograms of cargo. Two armored configurations will be produced: a basic protection package with an additional set of reservations and one multi-purpose package. The third option, which provides six seats and a medium load, has been canceled.

At the end of March, six applications for JLTV were submitted, providing for the 27-month design and production phase. In June, the army expects to enter into contracts worth $ 65 million each with three winners. Contractors will be provided with 12 months for building and supplying 20 and prototypes for testing, which in turn will last additional 15 months. The decision to start mass production is expected in the second quarter of the 2015 of the fiscal year, and actual production will begin in the 2016 of the year.

It is not surprising that in the epoch of defense budget cuts, the competition for one of the last remaining major vehicle modernization contracts turned out to be very high. As expected, the JLTV program will cost more than $ 10 billion, although some point out the amount of 70 billion dollars, depending on the number of vehicles ordered and the final cost of each.

Jointly ordered by the army and marines, JLTV is expected to provide better protection for the fighters and better payload than the Hummer, while maintaining mobility while reducing the overall weight. The army intends to purchase at least 50000 vehicles, while the marines hope to acquire 5500 vehicles, although the final figures will depend on the final cost of the vehicle.

The fate of Hammer was predetermined by its poor effectiveness in countering improvised explosive devices (IEDs) and roadside mines in Iraq and Afghanistan. Despite the fact that he was the main tactical vehicle of the army and marine corps for 25 years, he was not able to withstand these threats.

27 in March, Deputy Chief of the General Staff, Lieutenant General Robert P. Lennox (Robert P. Lennox) explained to the Senate Commission for the Armed Forces that this vehicle can no longer be used outside bases. "Hammer... Not able to go beyond the advanced operational bases, - he said. To date, he does not provide adequate protection for the soldiers."

The JLTV program has been around for quite some time, but like most major weapons programs, it has not escaped its share in cost overruns and delays. So in the 2010-th year disagreements arose in the directions of the project. The army put a priority on survival, and the marines expressed doubts about the high prices and the expected weight, which could be problematic for transporting the vehicle. As of February 2011, it turned out that the marines could refuse JLTV, which in turn could lead to an increase in the expected price of the car for the army and jeopardize the entire program.

In September last year, the Senate Committee on Budget Appropriations recommended closing the JLTV program, noting "excessive cost increases and ever-changing requirements." The committee recommended instead focusing on financing the upgrading and life extension of the Humvee. In response, the army and the Marine Corps decided to coordinate more closely the JLTV project and reduce the requirements for weight and transportability. They also agreed to reduce the target cost to about $ 250000 per vehicle, which made the expected cost of the Hummer project at $ 200000 per vehicle less attractive. With these changes, the JLTV program avoided closure, and in October a request for proposals for a lighter and cheaper JLTV was published.

One of the three companies that were selected to participate in the technology development phase is Lockheed Martin. It offers a family of vehicles that have accumulated more than 160000 miles of combined testing and exceeded the requirements of the technical specifications for protection against explosions. Unlike other contestants, Lockheed Martin has had a team working on the JLTV program for seven years.

"Our improvements have made it possible to reduce the weight of the original design by hundreds of pounds, which was successfully tested on helicopters," said Scott Greene, vice president of ground vehicles at Lockheed Martin. We proved that our JLTV reliably meets the standards many existing mine-protected vehicles today. This car is ready to meet the needs of our customers for cheaper materials in full-scale production. "

In addition, a team led by BAE Systems took part in the initial development phase and moved to a new stage of the competition without its partner Navistar, who decided to present his own car. The BAE Valanx will use the Power Stroke 6.7 liter turbo diesel engine, the same used on the Ford Super Duty F-Series pickup truck. Previously, Ford also expressed interest in JLTV, but could not meet the short deadlines put forward by the army.

“We have worked hard over the past year to strengthen our team and our proposal uniting the best from the defense and automotive industries,” said Ann Hoholick, vice president of amphibious and new BAE programs, in a statement. "Ford products have a reputation for reliability and performance, even under difficult conditions. We see their experience in commercial trucks as excellent for our JLTV offer."

Navistar attracted attention last October by presenting a light tactical vehicle to the US Army and this despite its cooperation with BAE at the early stage of the project. Navistar made a bet on something between JLTV and Hummer, deciding to create a car capable of filling the gap between these two specifications. The cuts to JLTV requirements and the abolition of the Humvee modernization program gave Navistar the opportunity to submit a Saratoga car to the competition with only minor changes, such as power generation and weight reduction.

The tactical vehicle of general purpose (General Tactical Vehicles, GTV), a joint development of the manufacturer Humvee AM General and General Dynamics Land Systems was selected as the third participant in the competition. Their development, dubbed JLTV Eagle, has a double V-shaped hull and is based on the German Army Eagle IV (manufactured by the GD Mowag branch in Switzerland) used in Afghanistan.

"Offering Eagle, we offer a modified, non-experimental, low-risk car with an inherent readiness for its production," said Mark Roualet, chairman of the board of directors. Our team ... offers a mature, fully transportable and a very reliable solution that is ready. "

In addition to competing with the GTV car, AM General also made an independent bid. At the last moment an explosive-resistant off-road vehicle (Blast Resistant Vehicle-Off Road, BRV-O) was submitted to the competition. Chris Vanslager, executive director of AM General, said that working on BRV-O would not distract them from participating in the GTV project. "As soon as we received the final demands of the government, we determined that we have several approaches to meeting their demands," said Vanslager. AM General offered its own engine and transmission, as well as more than 50 years of experience with light tactical vehicles and automobile production.

The only competitor not participating in its initial phase, Oshkosh Defense presented a light combat tactical off-road vehicle (Light Combat Tactical All-Terrain Vehicle) or L-ATV. Oshkosh intends to apply the experience and lessons learned from using the All-Terrain Vehicle Mine-Resistant Ambush Protected All-Terrain Vehicle (M-ATV), developed to combat IEDs and mines, which has been criticized in some circles for being too big and heavy .

"We have learned a lot not only by developing the M-ATV itself, but also by the M-ATV underbody protection kit," said Rob Messina, vice president of defense technology, in a recent interview. With JLTV, we had the opportunity to start a clean slate. We have developed very good solutions. "

While the Humvee will still be used for internal security and logistical support, the MRAP will be used to demine the route. At the moment, the Department of Defense is betting on JLTV. "The army is making significant efforts to upgrade when it comes to tactical wheeled vehicles from JLTV," said Col. Mark Barbosa, head of logistics development.

However, the intensity and scope of the JLTV competition suggests that the wheeled tactical vehicle sector is entering a era of austerity in good shape.