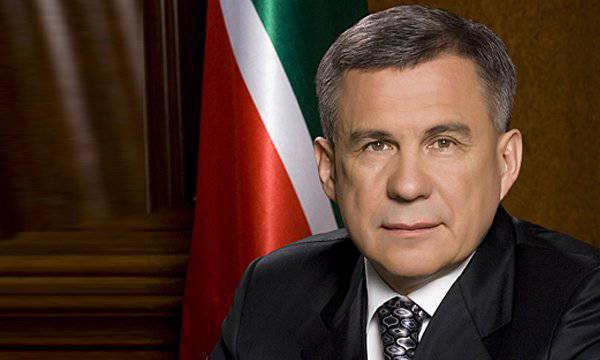 Once again, Tatarstan President Rustam Minnikhanov reminded about his sympathies to the Islamic model at the IV International Summit "Kazansummit-2012: Economic Cooperation of Russia and OIC countries", which opened in Kazan. He stated that the principles of Islamic economics based on Sharia law provide a great future for it.

This year, the forum, which was officially supported by the Federation Council of Russia for the first time, is attended by representatives of OIC 30 countries. Within the framework of the summit, a conference of representatives of the parliaments of the OIC member countries (formerly the Organization of the Islamic Conference, OIC - REGNUM) will be held on the theme: "Parliamentarians of the Islamic world for establishing a favorable business and investment climate." Also within the framework of the event a special meeting will be held "on the issues of the dialogue of civilizations".

"History showed that Western capitalism has repeatedly experienced the breaking of values ​​when the own interests of the financial sector were put above the interests of society. In contrast, values ​​in Islamic finance based on Sharia law demonstrate their effectiveness and low risks. Islamic finance has a great future, "Minnikhanov said in his speech at the opening ceremony of the summit.

He also noted that the Islamic world is the custodian of vast natural resources, "which maintain a stable trading activity." At the same time, the President of Tatarstan recalled that three-quarters of the world's oil reserves are located on the territory of Muslim countries, and there are 1,5 billion Muslims in the world.

According to the press service, Minnikhanov presented almost 100 investment projects worth about $ 10 billion at the summit. "The regions of the Russian Federation are growing in interest. This year 13 regions of Russia have become full participants in our event," he. - And the Republic of Tatarstan has excellent positions, and can become a full leader and center of Islamic banking and finance in Russia. "

It should be noted that the opening of the summit began with the reading of the Koran by the imam of the main Tatarstan mosque "Kul Sharif" Suleiman Zaripov, which was recently given to Islamic fundamentalists. In addition to the President of Tatarstan, the ceremony was attended by the Speaker of the Republic’s Parliament Farid Mukhametshin, Prime Minister Ildar Khalikov, Deputy Chairman of the Federation Council Ilyas Umakhanov, OIC Deputy Secretary General Hamid A. Opeloyeru, Director General of the Russian Direct Investment Fund Kirill Dmitriev, member of the Supreme National Assembly of Turkey Mevlüt Cavusoglu and others.