18 May 2012
21
Emerged by the end of World War II aviation the technique left no doubt in one simple fact: the existing anti-aircraft weapons were already outdated. In the very near future, all available anti-aircraft guns will not only lose their effectiveness, but will also become practically useless. It needed something completely new. However, before the creation of full-fledged anti-aircraft missiles, a lot of time remained, and it was necessary to protect the airspace now. The increase in aircraft flight altitudes has led the military of several countries to a kind of "enthusiasm" for anti-aircraft guns of especially large caliber. For example, in the late forties and early fifties in the USSR, designers worked on the project of the KM-52 gun caliber 152 mm. 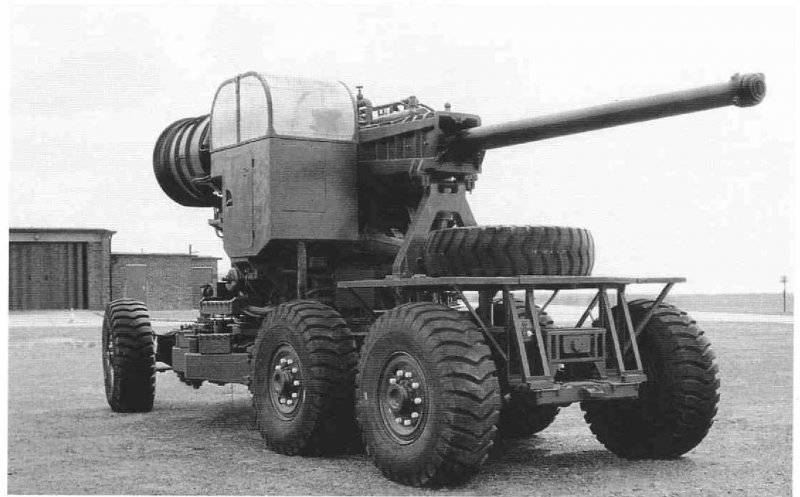 At the same time, in the UK, the development of anti-aircraft systems also proceeded in the direction of increasing caliber. Prior to 1950, two development work was conducted under the names Longhand and Ratefixer. The purpose of both programs was to increase the caliber of anti-aircraft guns and simultaneously increase the rate of fire. Ideally, the guns of these projects were supposed to be some kind of hybrids of large-caliber anti-aircraft guns and small-caliber rapid-fire guns. The task was not easy, but the British engineers coped with it. As a result of the Longhand program, the 94-mm Mk6 cannon, also known as Gun X4, was created. The Ratefire program led to the creation of four 94-mm cannons at once, denoted by the letters C, K, CK and CN. Until the 1949 of the year, when the Ratefire was closed, the rate of fire of the guns was brought to 75 rounds per minute. Gun X4 was put into service and used until the end of the 50's. The products of the program Ratefire, in turn, did not go to the troops. The result of the project was only a large amount of materials related to the research side of the design of such artillery systems.

All these developments were planned to be used in a new, more monstrous project. In 1950, RARDE (Royal Armament Research & Development Establishment) chose the famous Vickers company as the developer of the new system. The original terms of reference spoke about the creation of a rapid-fire anti-aircraft gun of 127 mm (5 inches) caliber with a water-cooled barrel when firing and with two drum magazines for 14 rounds each. The automatics of the gun was supposed to work at the expense of an external source of electricity, and an arrow-shaped feathered ammunition was offered as a projectile. The fire control of the new weapon, according to the assignment, was to be carried out by one person. Information about the location of the target and the necessary lead was given to him by a separate radar and a computer. To facilitate development, Vickers received all the necessary documentation for the Ratefire project. The project was named QF 127/58 SBT X1 Green Mace (Green Mace). 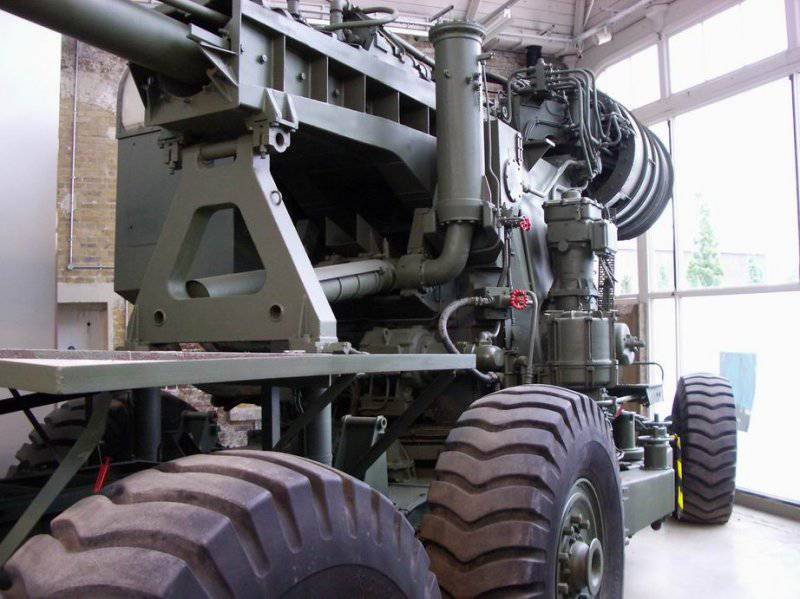 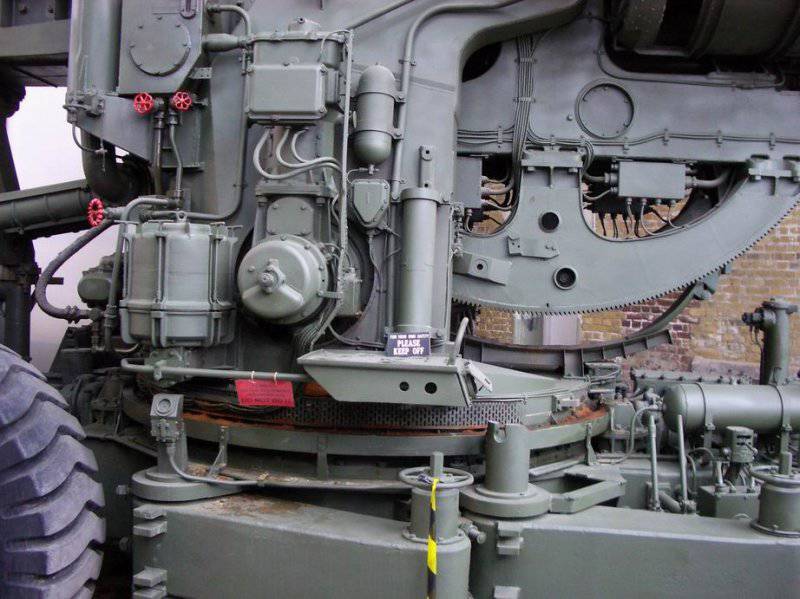 The task assigned to Vickers was very difficult, so RARDE was allowed to first make an instrument of a smaller caliber and work on all the nuances of a full-fledged gun. In fact, the smaller caliber of the test cannon turned out to be larger than that of the Longhand and Ratefire programs — 4,2 inches (millimeter 102). The construction of an experienced "small-caliber" gun under the designation 102mm QF 127 / 58 SBT X1 ended in the 54 year. The eight-meter barrel of this gun, along with anti-recoil devices, two barrel-shaped shops, guidance systems, an operator’s cabin and other systems, eventually pulled almost 25 tons. Of course, such a monster required some kind of special chassis. A special six-wheeled towed trailer was chosen as one. On it and installed all the units experienced gun. It should be noted that the trailer could fit only a gun with a fastening system, shops and an operator’s cabin. The latter was a booth like the cockpit of modern truck cranes. Since the guidance of the gun, recharging and pumping water to cool the barrel were made using electric motors, the complex had to introduce separate machines with an electric generator and a supply of projectiles. And this is not counting the radar station, which is necessary for detecting targets and pointing guns at them.

102-mm anti-aircraft miracle went to the landfill in the same year 1954. After a brief test firing for testing recoil devices and cooling systems, full-scale checks of automation began. Using the capabilities of the electric drive of the loading system, the testers gradually increased the rate of fire. By the end of the year, it was able to bring it to a record value in 96 shots per minute. It should be noted that this is a “pure” rate of fire, not a practical one. The fact is that the reloading mechanics could have issued these same 96 shots, but two “barrels” with 14 shells in each, by definition, could not provide a volley of at least half a minute with a maximum rate of fire. As for the replacement of shops, then on an experienced 102-mm gun of the Green Mace project, this was done with a crane and took about 10-15 minutes. It was planned that after practicing the systems of the gun itself, means of fast reloading would be developed. In addition to the record-breaking rate of fire, the gun had the following characteristics: The 10,43-kilogram sub-caliber feathered projectile left the barrel at a speed of more than 1200 m / s and flew to a height of up to 7620 meters. Rather, at this altitude, acceptable accuracy and reliability were ensured. At high altitudes, due to the aerodynamic stabilization of the projectile, the effectiveness of the damage significantly decreased. 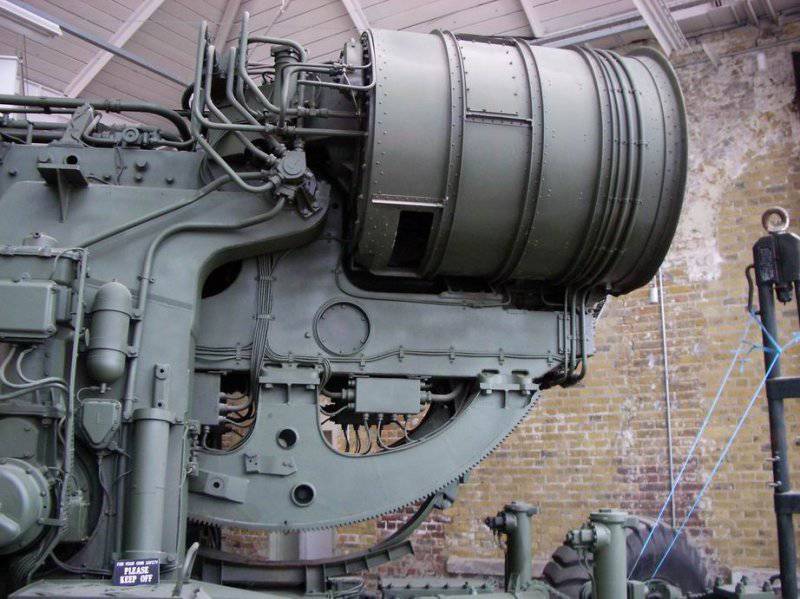 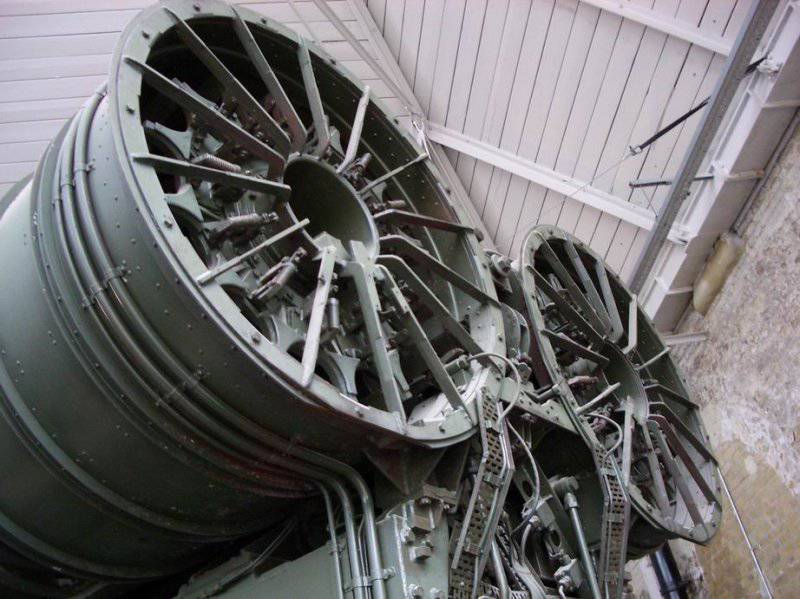 By the spring of the 55 test of the experienced 102-mm gun, the Vickers began to build a full-fledged 127-mm gun. And here the most interesting begins. The Green Mace project is not very well known, and as for its late stages, there are more rumors and assumptions than concrete facts. It is only known that the designers' plans included two versions of the “Green Mace” - smooth-bore and rifled. According to one source, the QF 127 / 58 SBT X1 cannon was built and even managed to begin testing. Other sources, in turn, claim some problems during development, because of which a prototype 127-mm gun could not be built. The approximate characteristics of the “full-sized” instrument are given, but there is still no exact data. Anyway, all the sources converge in one. In the 1957 year, taking into account the unsatisfactory performance of the Green Mace project in terms of height and accuracy, the British military department stopped work on high-speed large-caliber anti-aircraft artillery. At that time, the global trend of air defense development was the transition to anti-aircraft missiles and the Green Mace, even without completing the test, risked becoming a complete anachronism.

As if trying to save an interesting project from such a “shame”, RARDE closed it in 1957. Before adopting the first version of the Bloodhound anti-aircraft missile system, it was less than a year. 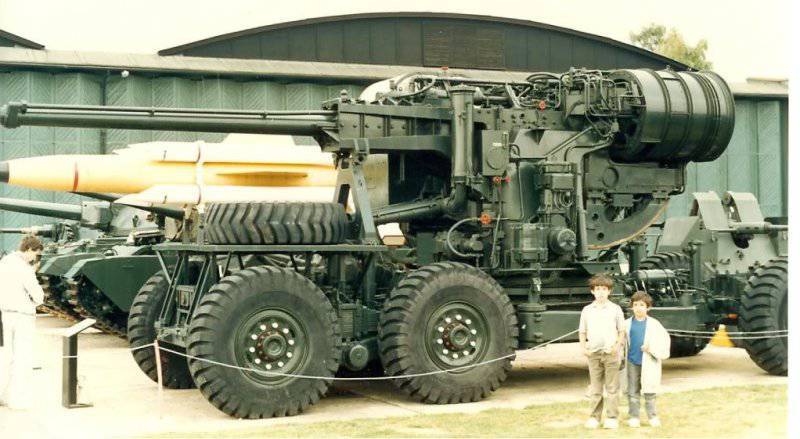