Ulyanovsk 31 airborne assault brigade from the inside. Reportage

18 May 2012
12
Look at the equipment, weapons, equipment and life of military personnel directly in the military unit provided an opportunity for Ulyanovsk recruits. Together with them, we passed through the separate XM airborne brigade stationed in Ulyanovsk.

On Saturday, in Ulyanovsk, a socially-patriotic action called “The Day of the Recruit” was held. More than three hundred Ulyanovsk recruits arrived at the 31 airborne brigade. A similar action takes place twice a year. Recall, the spring call began on April 1. For parents of draftees organize the work of the information and advisory center with the participation of the military prosecutor, military commissioner, representative of the Committee of Soldiers' Mothers.

After building on the parade ground and welcoming words, the event continued with the laying of a basket of flowers at the monument to paratroopers who died in the performance of military duty. Then the guests were divided into groups, and the elders in groups led them on a tour of the unit, during which the recruits were shown the equipment, weapons, equipment and life of the servicemen.

So, what did the draftees see? 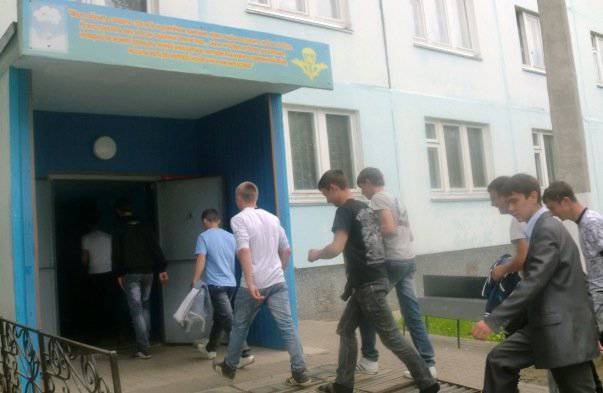 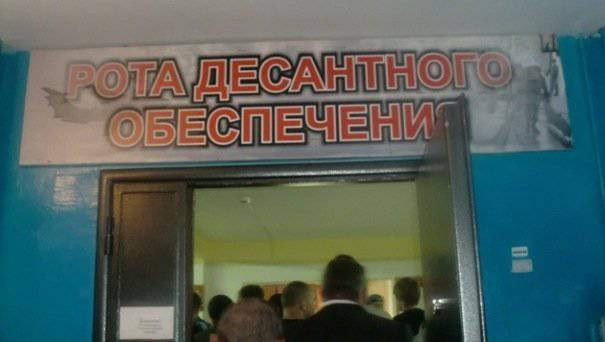 “We go to the first floor,” say the words of the senior in the group. “Here lives the personnel, including the contract soldiers.” 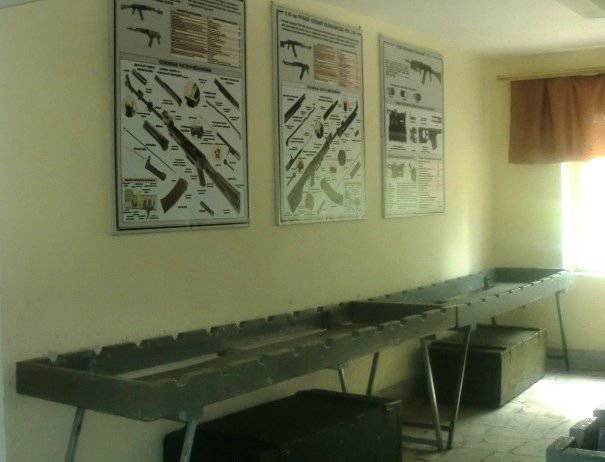 Here is a place to clean weapons, here - the schedule, then - the room for storage of weapons.

- And we can go there? - recruits quickened.

- No, you can not go there! Only the duty officer of the company and those who receive weapons have the right to enter, said the senior in the group.

There is also a leisure room - with a TV, sofas, books. By the way, the library has a fairly wide spread: from the Russian romantic novel from the series “Classics and Contemporaries” to “The X-Files”. 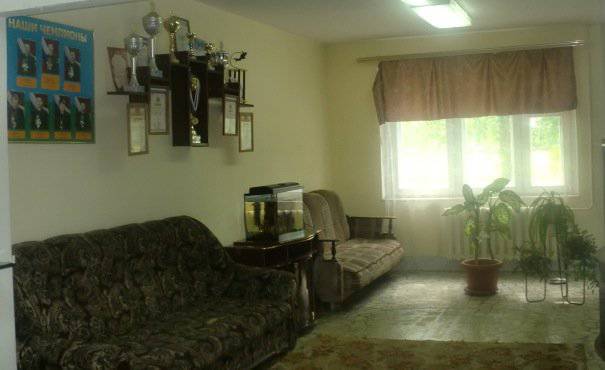 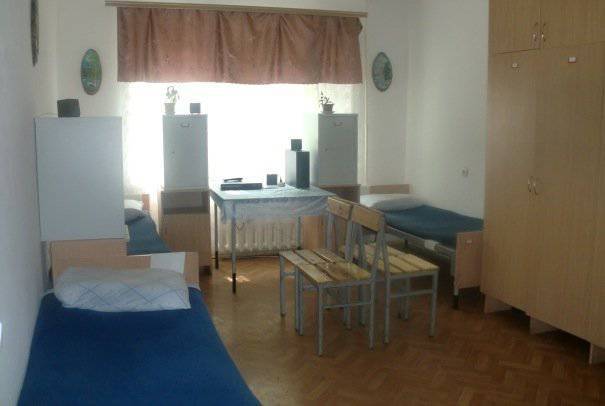 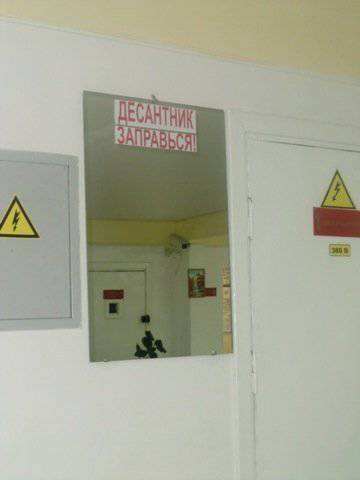 A little further away - a place for sports activities.

"The weapon loves accuracy and cleanliness in circulation", - with these words began an educational program on the military equipment used in the unit. 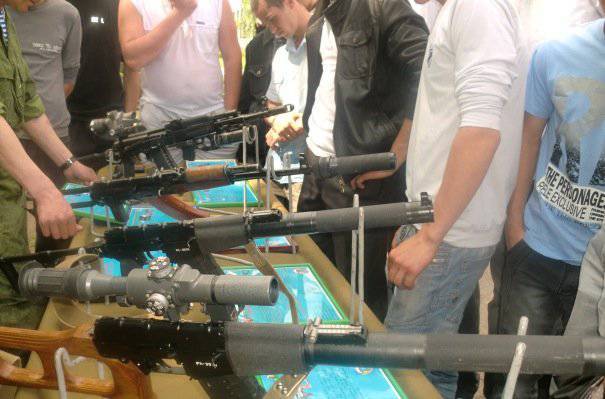 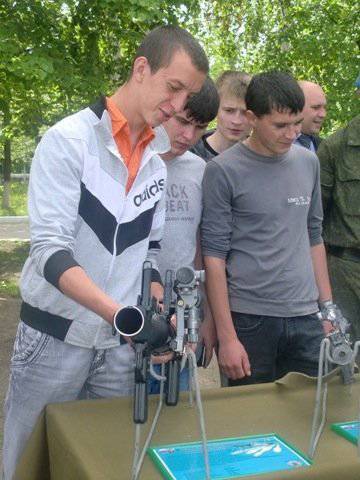 By the way, draftees were immediately warned that photography with all types of weapons had to be banned. The fact is that when photographing there are inadequate people who, for example, put a weapon to their heads. However, with some types of weapons still allowed to take a photo for memory. The conscripts lively discussed the features of this or that technique, and when posing for a photo, they heard: “Valera, your time!” And “Like in“ counter! ”. 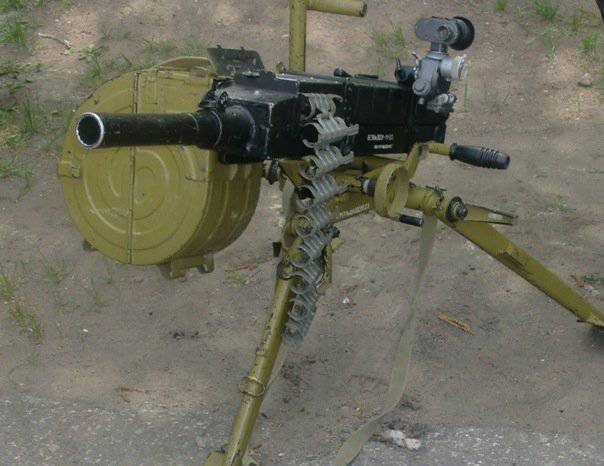 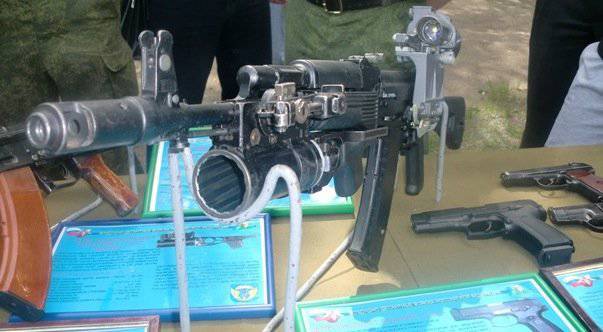 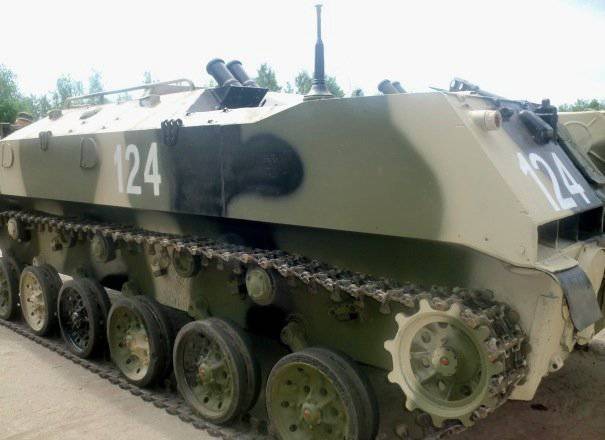 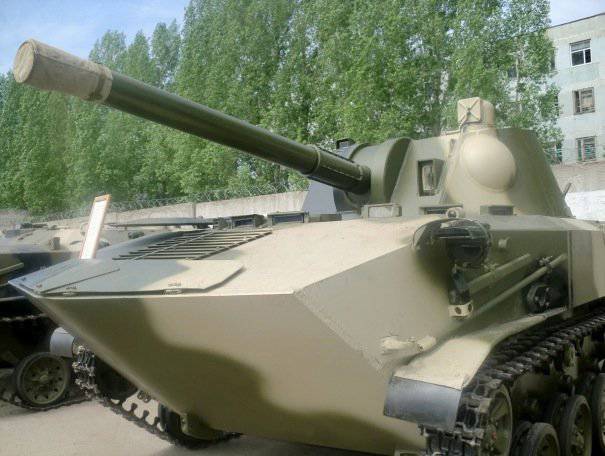 But, of course, computer toys are one thing, serving the Airborne Forces is another. There was a feeling that the recruits during the event more and more penetrated with the seriousness of military service. Yes, and brief historical a certificate given in the Room of Battle Glory located on the territory of the unit confirms this.

Our team was formed during the Great Patriotic War, and has a great combat experience. The servicemen took part in combat operations and military conflicts, including in Afghanistan and the Chechen Republic. Among them are Heroes of the USSR and Russia.

In the Room of Battle Glory you can find out the history of the brigade, see many interesting exhibits. The equipment of the military personnel is also presented here. For example, a raid backpack for combat missions of up to one hundred kilometers, an 12-kilogram body armor, and a plastic helmet that replaced the iron one. 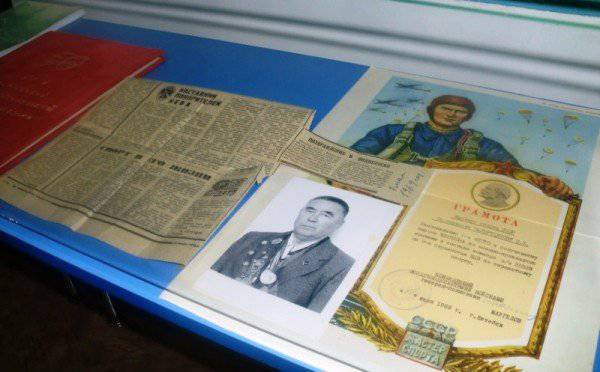 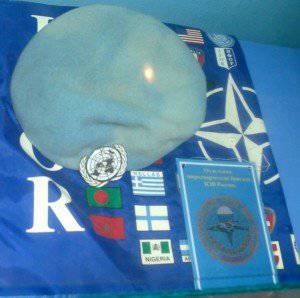 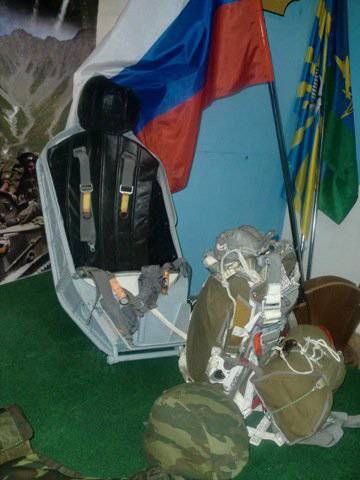 Shown here is the D-6 parachute, on which paratroopers, until recently, performed jumps (its area is 80 square meters). Now jump with parachutes D-10, whose area is 100 square meters. There is also a unique armchair here - Yuri Gagarin rose to exactly the same space. In addition, a spare parachute is presented for the Z-5. During the excursion, the details of training and jumping were told, for example, parachutists after a step “into the abyss” count down the seconds, say 501, 502, 503, and pull the ring. 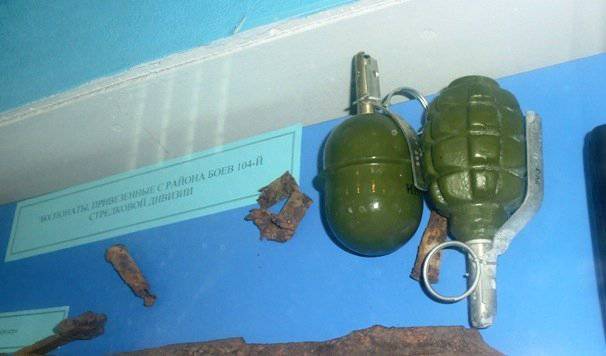 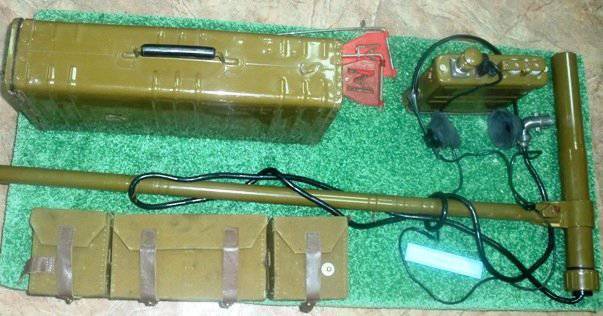 If there is a theory in the Room of Fighting Glory, then further - at the place of training parachutists - the most practical practice where retreat from discipline can cost life. 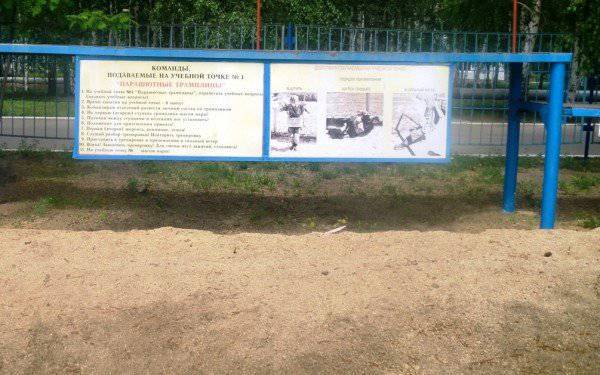 Airborne complex - parachutists are trained and trained at this training site to perform a parachute jump from military transport aircraft aviation. The future parachutists are on the parachute tower: they have never jumped from airplanes in their life. These are soldiers of military service, people who decided to start contract service, but served in other troops. Also here, military personnel take classes every week so as not to lose their qualifications. 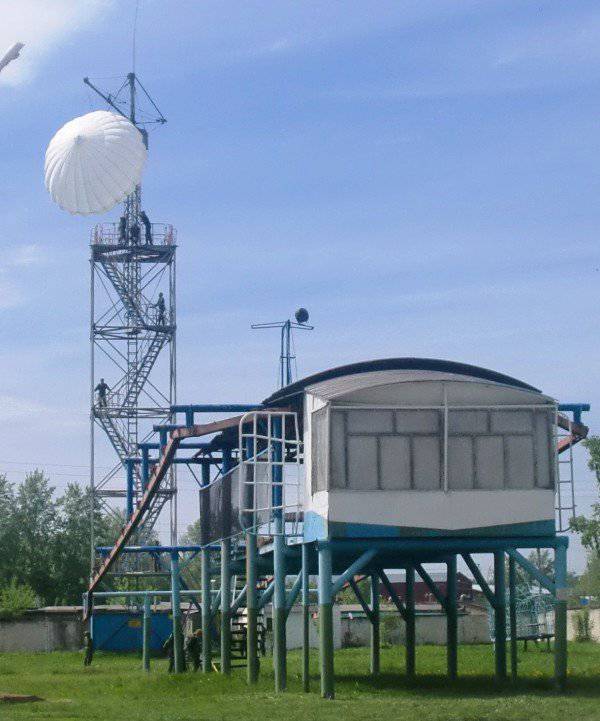 The height of the tower, taking into account the lightning rod - 45 meters, make a jump from the platform at the height of 30 meters. On the tower, actions are performed that are necessary for the parachutist directly in front of the ground.

And here they teach how to act in the air, where there are rules. If you do not comply with them, listen carefully and do not do what is required, everything can end in tears. As recruits were told, the airborne training was written in blood, therefore, they require maximum attention and exact repetition of actions. If this does not happen, then the person does not get to the sky.

This is an imitation of the aircraft, from which in the future jumps will be made. Here, hone jumping skills. 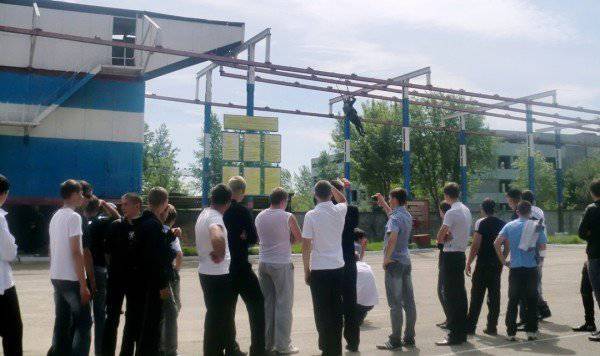 By the way, after the story about training paratroopers, draftees were asked if they wanted to serve in airborne forces. The impressed conscripts at first timidly raised their hands, but several people firmly "voted" for service in the airborne troops. However, according to the impressions of many recruits, this event is useful and interesting.

The last point of the tour was a dining room. Now the army cooks food. Traditionally, there is a strict meal schedule, in the lobby there is a menu, a plan for assigning tables to divisions and other thematic information. 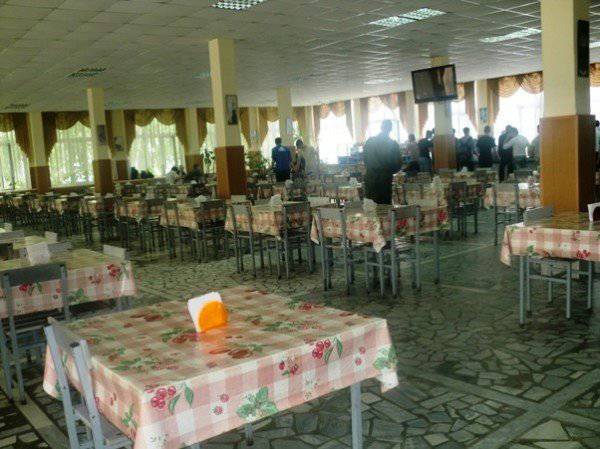 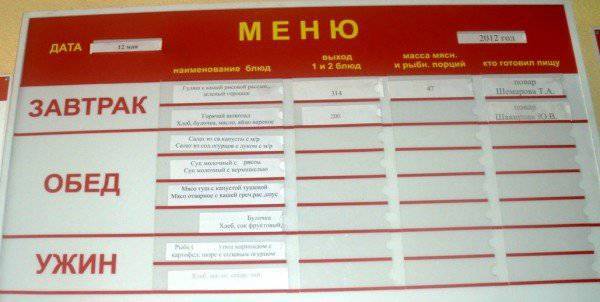 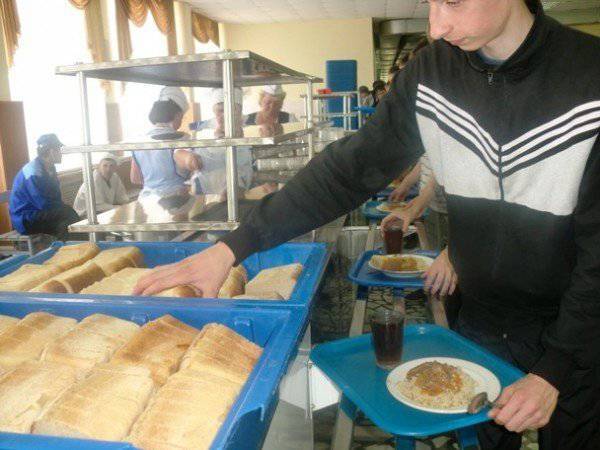