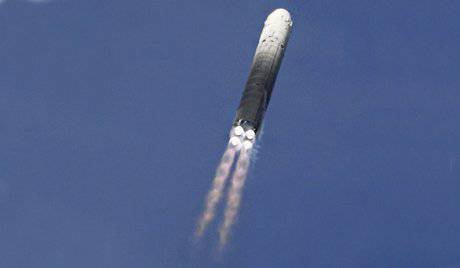 NATO is trying to thrust Russians into the pharynx of an imaginary ballistic missile defense system, which, if it worked - and it does not work - could be used against Russian intercontinental ballistic missiles

The dream of a shield that protects against atomic bombs, appeared at the dawn of the nuclear era. This idea has always been deceptively simple: create missiles that can shoot down intercontinental ballistic missiles with nuclear warheads that fly from the Soviet Union across the ocean to the United States (or vice versa). Although this is the same as trying to shoot down a bullet with a bullet or an arrow, there have always been political and military leaders who are confident that this is feasible. The last attempt was made 27 years ago, when the Reagan administration launched the Strategic Defense Initiative, and since then, the agencies responsible for missile defense have continued to go towards their goal.

Independent scientists and engineers from the United States and Russia consistently evaluate past attempts as failures and wrote several detailed reports that show why the plans of such an anti-missile defense system are technically impractical. However, despite criticism from a technical point of view and negative test results, the US government continued to insist that the program is being carried out successfully. Until recently.

A report of few people, published in September by 2011 by the Scientific Committee on Defense, an independent advisory body under the US Department of Defense, identified three serious problems with the ballistic missile defense being developed by early interception. Apparently, (1), none of the necessary radars in the framework of the defense system of the European phased adaptive approach is powerful enough to cope with the tasks, (2), none of the available anti-missile sensors are able to distinguish warheads from false targets and other outsiders, and (3) American intelligence has already watched the launch of foreign ballistic missiles capable of shooting false targets and taking other countermeasures. So, after 27 years of development and expenditure of 150 billion dollars, there is no effective anti-missile “shield” - it remains just a dream.

Judging by the news of this report, we can conclude that missile defense, which we have heard about for many years, has ordered to live long. The system that Russia regards as a threat to its security does not work and, even if problems can be solved - and this is a big “if” - the system will remain inoperative for many years.

But on the eve of the NATO summit, something funny happened. In the run-up to the May 20 meeting in Chicago, NATO officials continue to talk about missile defense as if it already existed; it is expected that at the end of the month they will announce new plans for cooperation on its deployment in Europe. Moreover, these same officials are angry with Russia for stating the possibility of a preemptive strike on the system if it is deployed. Apparently, Russia has enough spirit to consider the proposed system as a threat to its missiles. Alas, for such a thinking, Russia deserved a reproach from the head of NATO, who called the position of the Russians "unfounded."

We will be very clear: NATO is trying to thrust Russians into the pharynx of an imaginary ballistic missile defense system, which, if it worked - and it does not work - could be used against Russian intercontinental ballistic missiles. Since NATO treats this system as if it exists in reality, Russia has to interpret it in the same way. And so Russia insists that in the event of a missile defense system deployment, it will disable it, although the system is not able to cope with the tasks assigned. Thus, NATO and Russia are ready to gnaw each other's throats for a weapon system that does not work as it should, and if it worked, could reasonably be considered a threat to the interests of Russia, although NATO denies this. Truly, "the secret, covered with darkness, seven seals." But now the mystery covered in darkness is no longer Russia, as Winston Churchill proclaimed in 1939, but NATO’s plans to create an anti-missile defense.

However, it is possible to hope that this riddle can be solved. As I learned from Ted Postol, an expert on ballistic missiles from the Massachusetts Institute of Technology, there are already informal discussions between engineers and missile defense experts from the United States and Russia to clarify their missile defense plans. The meeting of scientists from the Center for International Security and Cooperation at Stanford University and the Committee of Scientists for Global Security of the Russian Academy of Sciences in September 2011 resulted in a joint statement on cooperation in the field of missile defense, which recognized Russia's concerns about the American phased adaptive approach involving the deployment of missiles -interceptors and radar in close proximity to the Russian border.

The most promising outcome of the regular meeting of the two groups, held in March, was a proposal to American and Russian rocket experts on joint research and development of an “advanced active protection” system, which should replace the current - inoperable - phased adaptive approach. The joint development of a new system would have at least two advantages: firstly, it would promote the development of strategic cooperation between the United States and Russia, and, secondly, could lead to the creation of a workable system. We hope that NATO officials will be aware of the cooperation proposal before the summit, which will be held at the end of the month. It is a pity if NATO and Russia will bicker because of the system, which turns out to be a mirage.