Why did they kill the Russian tsar? 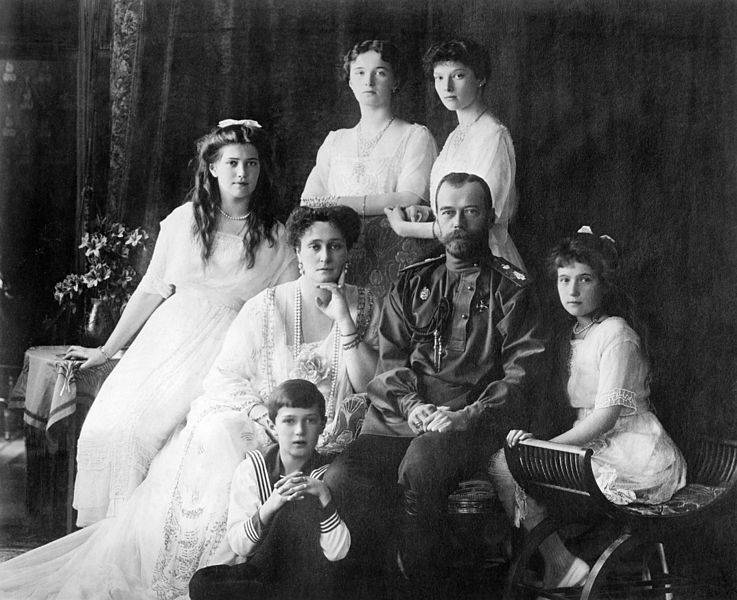 In modern Russia, the myth prevails that the main culprits in this massacre are the Bolsheviks, personally Lenin and Stalin. However, this is a hoax, which is driven into the minds of people for certain political purposes. First, they try to hide the true culprits of the death of the royal family. Secondly, once again to blacken, cover up with blood the party of Bolsheviks, and therefore the idea of ​​Russian communism. Like, here are some monsters and bloody Bolshevik executioners, committed terrible reprisals against a defenseless family. They claim that Nikolai Aleksandrovich and his family were brutally murdered personally on the orders of Lenin, who avenged the Romanov dynasty for the death of his brother, executed under Alexander the Third. What exactly for the sake of revenge Lenin and "destroyed" the Russian empire. However, in reality neither Lenin nor Stalin had anything to do with the murder of the last Russian emperor and his family. Lenin categorically insisted on the trial of the activities of the former king and his wife Alexandra Feodorovna. Stalin, when the fate of Nicholas was decided, was not at all in Moscow, he was engaged in other matters.

It is worth remembering that Nicholas II was deprived of the throne, not by the Bolsheviks, but by the Westernists-Februaryists - most of the elite of the Russian Empire. The degenerated "elite" of Russia, grand dukes, aristocrats, generals, large owners, capitalists and the bourgeoisie, part of the bureaucracy, the pro-Western Russian intelligentsia, who hated tsarism. Many of them were merged into masonic lodges, which were under the control of "brothers" from the West. The masters of the West acted through the Masonic lodges and clubs, embassies and special services as an organizing force to destroy the Russian autocracy and plunge Russia into chaos, dismember and destroy the Russian civilization. For this purpose, a world war was organized in order to exsanguinate the Russian army and deprive the monarchy of its last powerful support. The Westernists-Februaryists prepared a palace coup and overthrew Nicholas (February Revolution).

Westerners formed the Provisional Government. At the first stage, it was headed by Prince G. Lvov, and then attorney-mason A. Kerensky. The fate of the former emperor who had renounced the throne depended on them. The fate of an unenviable, full of hardship and suffering. As the ancients said, woe to the vanquished.

20 March 1917 year of the deposed king and his wife were arrested by order of the Provisional Government. Until August 1917, Nikolay, his wife and children lived under arrest in the Alexander Palace of Tsarskoye Selo. According to Kerensky, they arrested the former tsar and his wife in order to protect the mob against mob law and to investigate the tsarist internal policy (the empress was accused of treason). For this purpose, the Supreme Extreme-Investigation Commission was organized, which was supposed to examine the activities of the bearers of the higher authorities of the old system.

As a result, the life of the royal family depended entirely on the will of Kerensky, who was charged with the maintenance and protection of the former emperor and his family. The Minister of the Provisional Government, P. N. Milyukov, tried to send Nicholas and his family to England, in the care of King George V, for which the prior consent of the British side was obtained. But in the end, the British refused to accept the Romanov family, in fact, London condemned the former Russian emperor to death.

Kerensky did not stand on ceremony with the prisoners. All documents and diaries were taken from Nikolai. He was restricted in his freedom of movement even in the palace. Nicholas and his family were completely isolated from the outside world. Dating was forbidden; correspondence was strictly censored. For the prisoners established double surveillance - external (head of the guard) and internal (commandant of the palace). Kerensky talked with the royal family roughly, without courtesy. He unceremoniously invaded the privacy of the former monarch, with all his appearance showed that Nicholas is now an ordinary mortal. Accordingly, the guard behaved.

In August, under the pretext of strengthening the revolutionary movement and anarchy in Petrograd, Kerensky decided to transfer prisoners deep into Russia, to Tobolsk. Nikolai did not expect this link. He hoped that he and his family would be sent to the Crimea, where some of the great princes and his mother lived. And in case of danger, from the Crimea could easily go abroad. But nothing could be done. As he could not save the country from war and confusion, he was also unable to protect his family. Kerensky, on the other hand, pretended that the translation was linked to the security of Nicholas. 4 (17) August 1917 train arrived in Tyumen, then arrested on the steamers Rus, Kormilets and Tyumen along the river were transported to Tobolsk. The Romanov family was housed in the governor’s house, specially renovated for their arrival. The family was allowed to walk across the street and the boulevard for worship at the Church of the Annunciation. The security regime here was much easier than in Tsarskoe Selo. Here the family led a monotonous, calm, measured life. The house, yard, small garden, church - the whole territory of life. The same people. From entertainment - physical work, swings and an ice slide.

Life was complicated by the Commissioner of the Provisional Government Pankratov and his assistant Nikolsky, who arrived in September. They led themselves rude and defiant. Their excesses continued for quite a long time. These figures were expelled by the soldiers after October. Commissioner Yakovlev came to replace them. He arrived with a detachment of soldiers in Tobolsk 22 April and had the right to shoot disobeying on the spot. At the end of April 1918, the prisoners were transported to Yekaterinburg, where a private house was requisitioned to accommodate the Romanovs.

Yakovlev was recalled, accusing him of allegedly trying to take the tsar abroad. The life of the royal family in Yekaterinburg was hard. They fell into the clutches of Zaslavsky, a very unpleasant person, and two more “specialists” of his shoulder cases — Goloshchekin and Yurovsky. These were very dark personalities. The chairman of the Ural Regional Council was Beloborodov (Y. Vaysbart). All of them were associated with the chairman of the All-Russian Central Executive Committee, Yakov Sverdlov (Yankel Rosenfeld), and he is closely tied to L. Trotsky. That is, the family of the former emperor again fell under the authority of agents of the West (previously, the fate of Nicholas was controlled by the western mason Kerensky). Sverdlov and Trotsky were the main conductors of the influence of the masters of the West among the Bolsheviks.

The masters of the West consistently destroyed Russian civilization: at first they plunged Russia into a war she did not need, they swept away the Russian autocracy, they destroyed the empire; the policy of the pro-Western Provisional Government finally plunged the country into turmoil, led to the collapse of Russia and the civil war; The Bolsheviks easily dared the Februaryists, the war of whites and reds, a fratricidal slaughter began. The troops of the Western powers began the occupation of Russia. BUT Trotsky, the protege of the “world behind the scenes,” became the second man after Lenin in the party and the Soviet state. He was planned to make the head of the new Russia. But for this it was necessary to eliminate the symbol of the old autocratic Russia — Nikolai (to make a sacred ritual sacrifice) and Lenin, an authoritative leader of the party and an experienced politician, who led his game.

Initially, the royal family was planning to execute already in Tobolsk. To do this, Zaslavsky arrived with the detachment. He, under the pretext of preparing Nicholas's escape, demanded to transfer his prison. But he met with the resistance of the guard chief Kobylinsky and his soldiers. Then Zaslavsky went to Yekaterinburg and reported on the situation to Beloborodov. He urgently went to Moscow, where he met with Trotsky and Sverdlov. Here, apparently, they developed a plan for the transfer of the royal family to Yekaterinburg. Trotsky was in a hurry. While there was unrest it was possible to take control in the country, in a more quiet time, he had no chance of success.

With the aim of even more chaos, he provoked Germany to intervene (the doctrine of “neither peace nor war”). Trotsky was dismissed from the post of People's Commissar for Foreign Affairs and appointed chairman of the Revolutionary Council, a military commissar. Trotsky was driving along the fronts, and all the victories of the young Red Army, whoever would have won them, attributed to himself. Foreign press called it the "Red Napoleon". Trotsky, however, continued to sow discord and again acted as a provocateur during the uprising of the Czechoslovak Corps, organized by the masters of the West to expand and strengthen the civil war in Russia. Soviet Russia was in the ring of fronts.

And at this moment, at the very apogee of the unrest, Trotsky is trying to seize the supreme power. July 12 The Ural Council, chaired by Beloborodov, decides: to bring Romanov to death without waiting for the trial. Yurovsky hastily forms a detachment of murderers. He told them that the order came from Moscow. On the night of 16 on 17 July, the royal family was brutally murdered. On the same night, Yurovsky tried to cover all traces and destroy the evidence of the massacre. So Trotsky eliminated the main symbol of "old Russia". The next was Lenin. In August, they tried to kill Lenin. But there was a slip. Vladimir Ilyich was only wounded.

Subsequently, the events did not develop according to the scenario of Trotsky and his Western masters. Soviet Russia did not become a “dung” in the matter of creating a new world order on the basis of false Communism. The Russian communists were able to create their own global project - the Soviet civilization, which took the best of the Russian empire and made a breakthrough into a bright future, the “golden age”. Soviet society on the basis of justice, ethics of conscience, service and creation became an alternative to the Western slave society of consumption and self-destruction.

Thus, the murder of the last Russian emperor Nicholas the Second and the attempt on Lenin are links in a single chain, the great game of the West against Russia.

How to create a volunteer army
How the battle for the Don began
"Your talk is not needed by the working people. The guard is tired!"
100 years of the Workers 'and Peasants' Red Army and Navy
Who incited the Civil War
White fought for the interests of the West
Anti-Russian and anti-state white project
How "Ukrainian Chimera" incited the Civil War
How to create Ukraine and the "Ukrainian people"
How the red took Kiev
Victory of the Red Army on the Don
Bloody Battle of the Ice Campaign
How Kornilov stormed Ekaterinodar
Destined to die? Died with honor!
People against power
How Drozdovtsy broke through on the Don
How drozdovtsy stormed Rostov
Don Republic Ataman Krasnov
West helped the Bolsheviks?
Why did the West support both red and white?
Why do Czechoslovak murderers and looters erect monuments in Russia
Second Kuban campaign
Eastern Front Education