Stories about weapons. Tank T-62 outside and inside 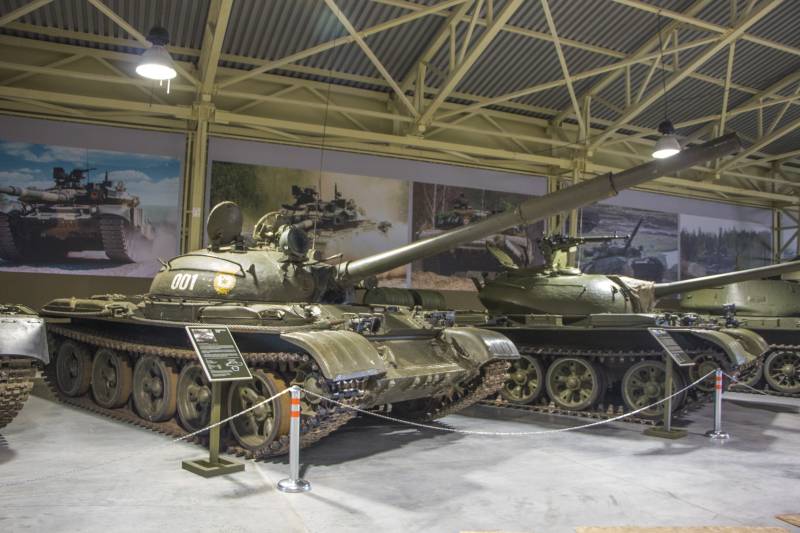 A lot in common with the previous hero of our reviews, a tank T-54/55. As simple, convenient, reliable as its predecessor. Yes, the war in Afghanistan revealed the flaws of the tank, but more on that below.

In the appearance of the T-62, the main role was played by our intelligence. It was thanks to the clear actions of our intelligence officers that the leadership of the country promptly received very unpleasant information.

It was about the adoption by the NATO countries of new tank guns of caliber 105 mm. This gave a significant advantage to the likely enemy’s tanks over our T-54 and T-55. 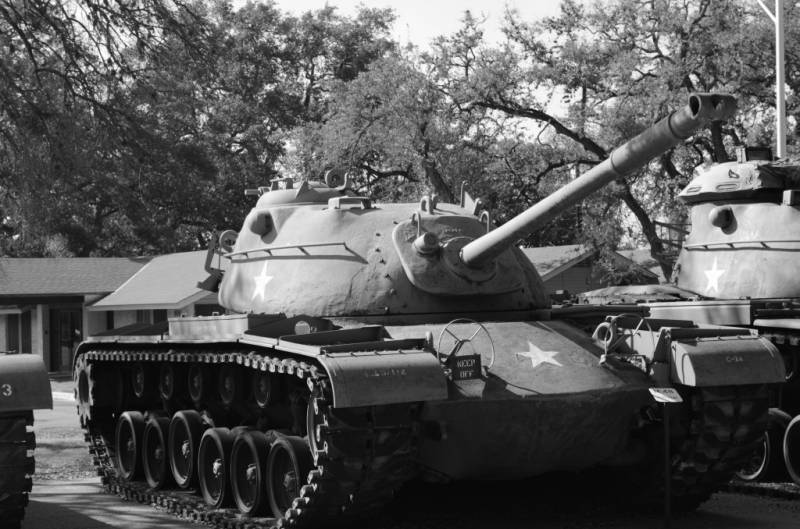 By that time, it was no secret that our X-NUMX-mm cannon of the T-100 tank did not penetrate the front armor of the American tank M55 Patton III, but the Americans already had the M48 Patton IV on the way. With the new gun, the M60 generally started to have such an advantage that it caused serious concern to everyone in the Union.

But it is worth agreeing that not only we were able to catch up and overtake us, but we knew how to masterfully. And since the time of Joseph Vissarionovich.

In Nizhny Tagil, where the Uralvagonzavod design bureau is located, since the adoption of the T-54 began work on the next generation tank. This is the so-called "Object 140", which was built in metal, but did not go into the series. However, the developments of the “140 Object” went into action and were applied when creating the “165 Object”, the prototype of the new tank. 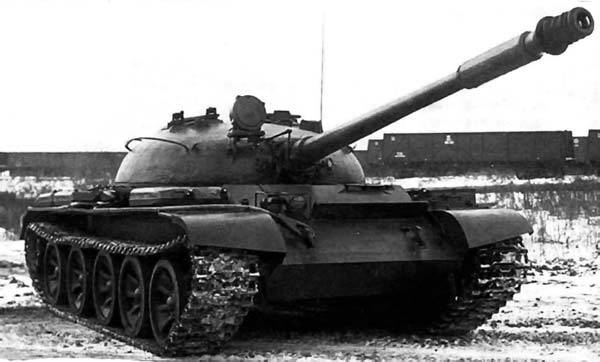 The 165 object inherited from its predecessor the hull, turret, engine compartment, transmission, and mechanism for automatically throwing sleeves through the turret hatch.

The “165 object” was planned to be armed with a new 100-mm rifled U-8TC tank gun, which was an upgrade of the D-54TS gun. In principle, all the innovations of modernization consisted in the stabilizer "Comet" instead of "Lightning" on the D-54TS.

“Comet” was a more modern stabilizer, but the problem was not the stabilization of the trunk. The gun had a whole heap of claims, the main one of which was the inadequate penetration capability of the projectile.

It is quite logical that, at the same time as the “165 Object”, the development of the “166 Object” began, for which another tool was being developed. 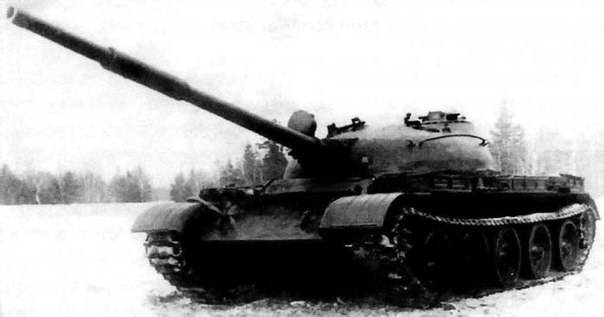 If correct, then, of course, do not develop. The gun had already been developed by that time in the Design Bureau of the Yurginsky Machine-Building Plant No. XXUMX. It was developed as a particularly powerful anti-tank gun T75 caliber 12-mm. 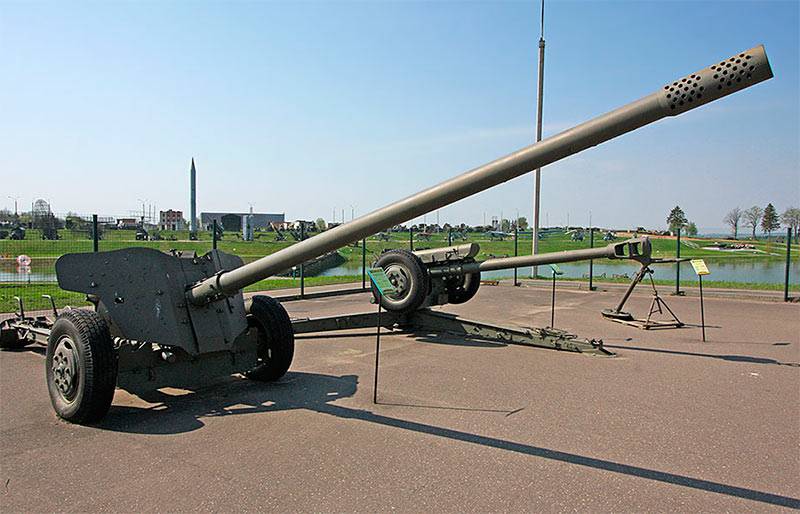 A feature of this gun was the lack of rifling in the barrel. The gun was developed smooth-bore, and here's why: cumulative projectiles have a greater penetrating ability, if they do not give the torque.

For the T12 cannon, special feathered armor-piercing shells were developed, which also did not need to be given a rotational moment. At a distance of 1 km, this gun pierced armor with a thickness of 215 mm, which in theory was quite enough to fight the main tanks of NATO countries.

Naturally, the idea of ​​installing a T12 on a tank immediately arose, since it happened so that a smooth-bore gun was almost half as powerful as a rifled gun.

However, in practice, everything was not so simple. The shells developed for the T12 could not be used in a tank because of their size. The length of the unitary cartridge was 1 200 mm, which is perfectly normal for artillery guns, but it is simply unrealistic to turn in a tank with such a cartridge.

Therefore, the smooth-bore cannon for the tank had to be made from Y-8TS. In the 100-mm cannon, rifles of the barrel were removed, which increased its caliber to 115-mm. Due to the lack of rifling, it became possible to significantly increase the pressure of the powder gases and thereby increase the initial velocity of the projectile.

The new gun had no muzzle brake, which was welcomed by the military. The barrel of the gun was lengthened. Thus, the world's first tank-smooth-bore gun U-5TS “Hammer” was born.

Contrary to many concerns, the accuracy of the new gun was at the level of the best tank rifled artillery systems of the time.

The base model T-54 also underwent changes and modifications. The gun course on the new tank was removed, and the method of fastening the twin PKT machine gun was changed due to the replacement of the gun.

The new tank gun was too heavy for the Kometa and Molniya gun stabilizers in service. Under the new instrument was developed a new stabilizer "Meteor".

The layout of the tank was classic: the front housed a command compartment, followed by a fighting compartment and, in the stern of the tank, the engine compartment.

On the left side of the control compartment was the driver’s seat, which fell on him through a hatch located directly above the seat in the under-armored armor. Behind the seat in the bottom there was a spare escape hatch. 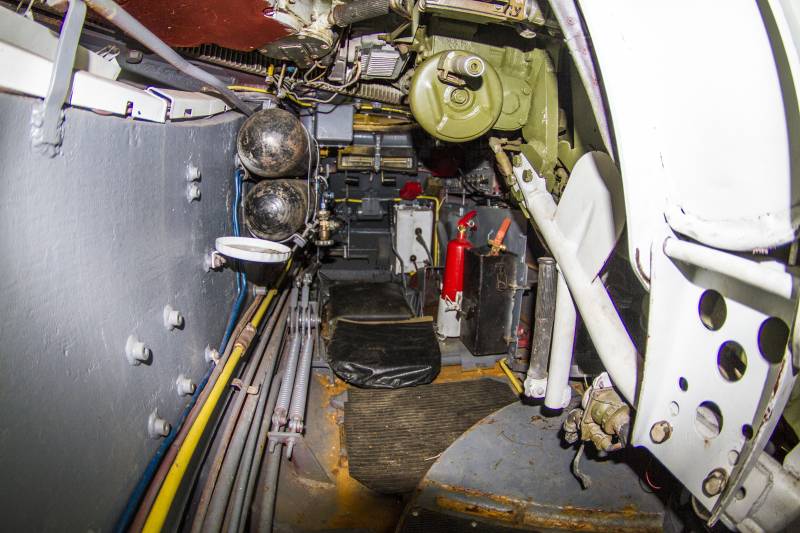 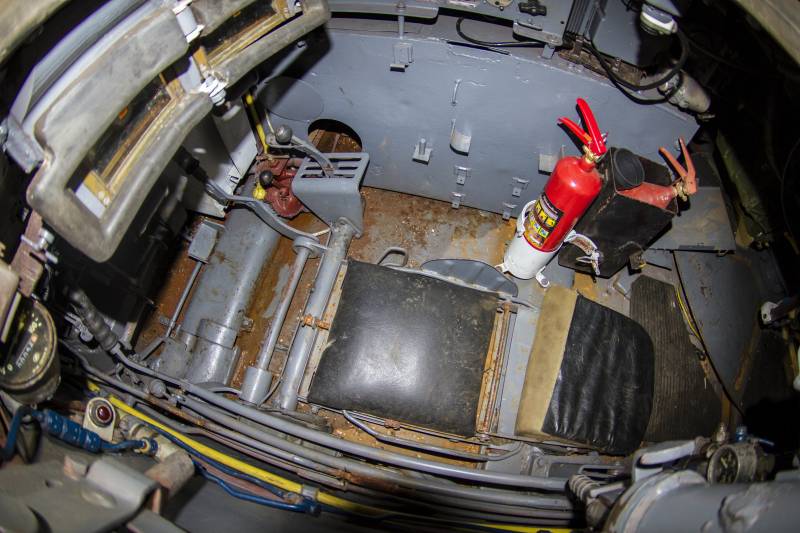 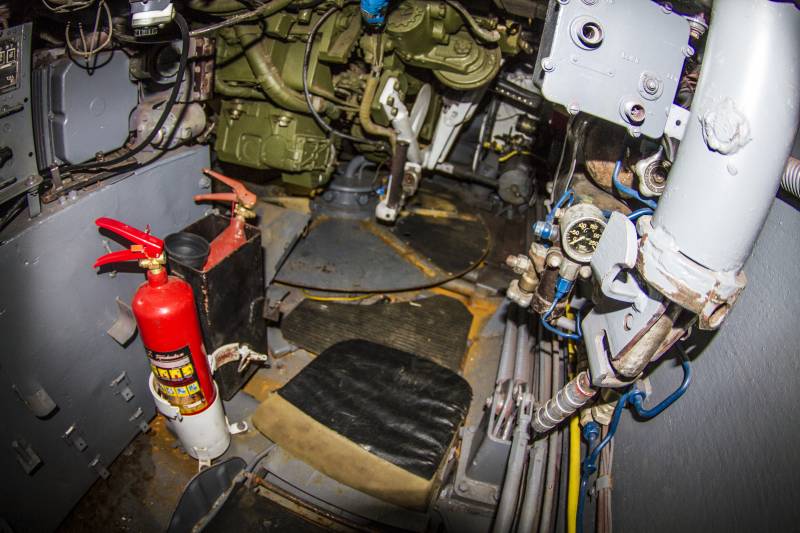 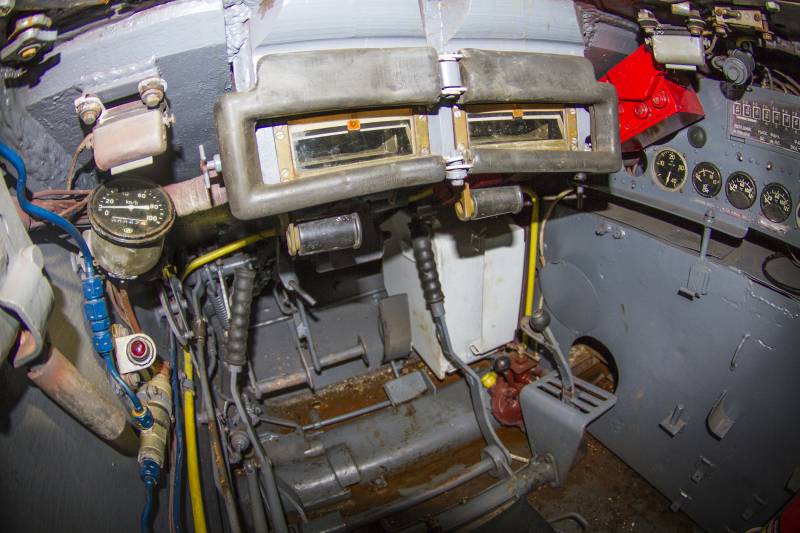 At night, the night vision device TNV-2 was added to the optical instruments, which allowed the driver to see the road 60 m in front of the tank. The infrared headlight was located next to the normal headlight on the right side of the housing. Under water, the tank was controlled by a heading indicator. 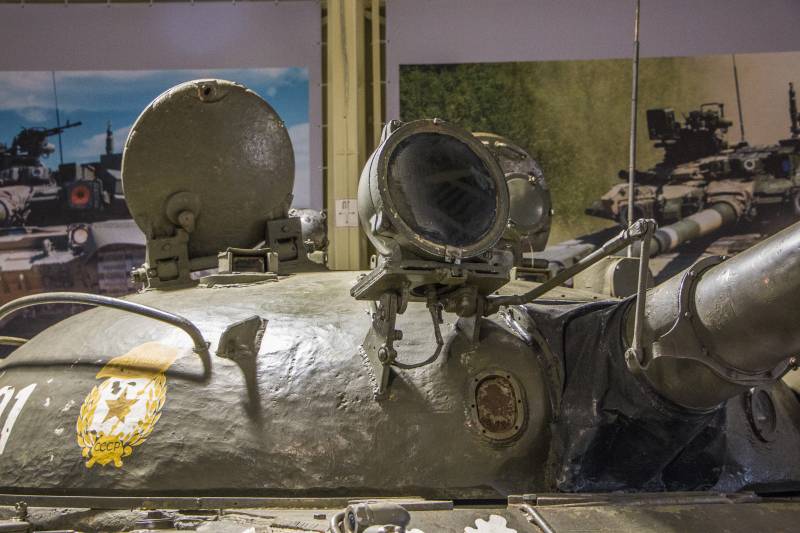 In the fighting compartment there was a tank commander (left behind in the tower), a gunner (front right to the tower) and loader (rear right in the tower). 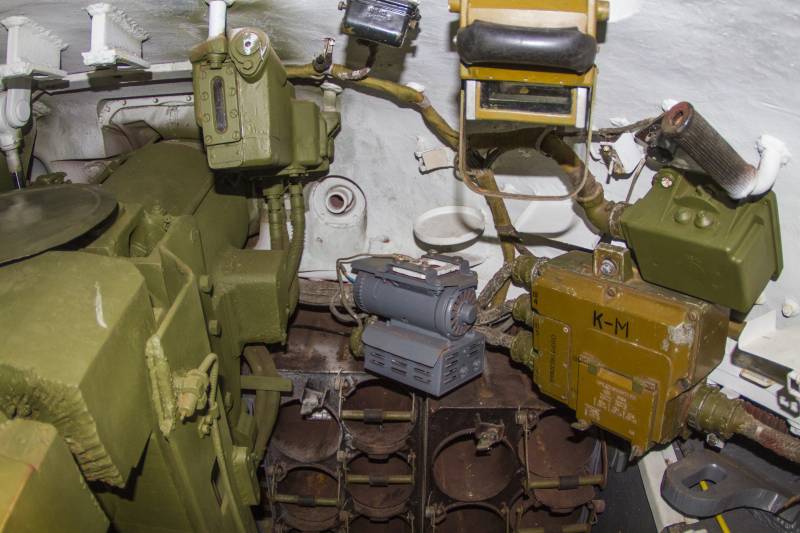 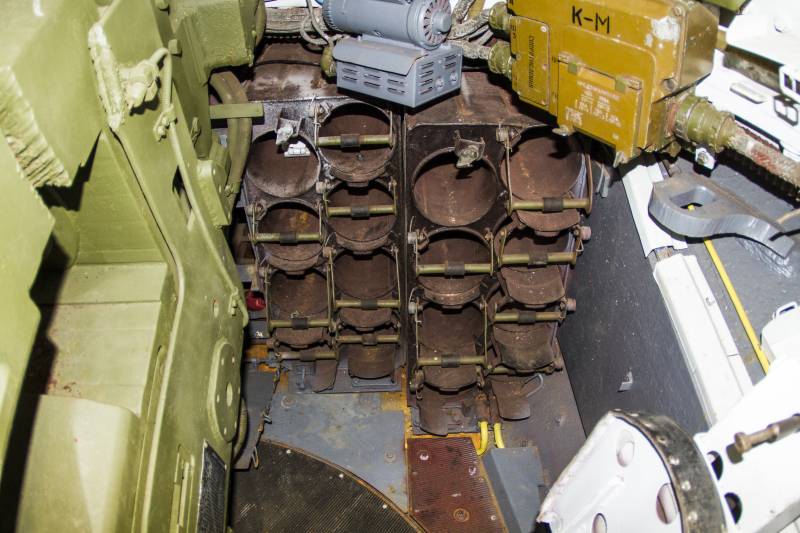 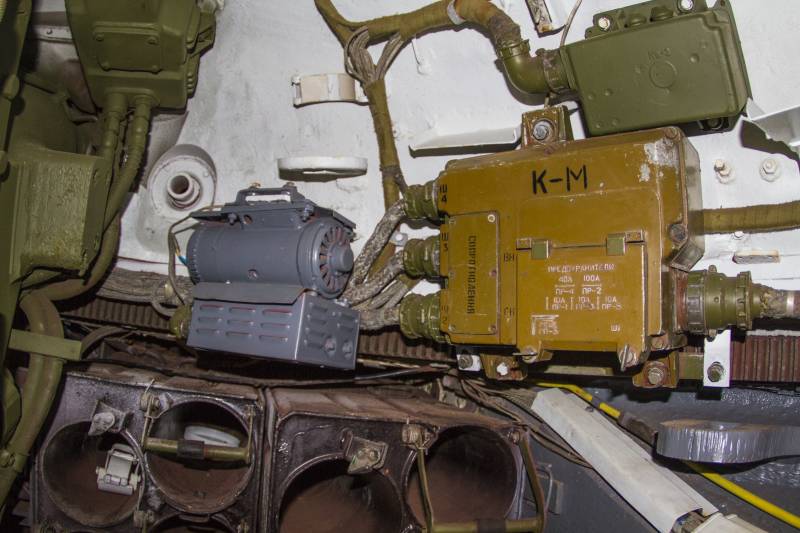 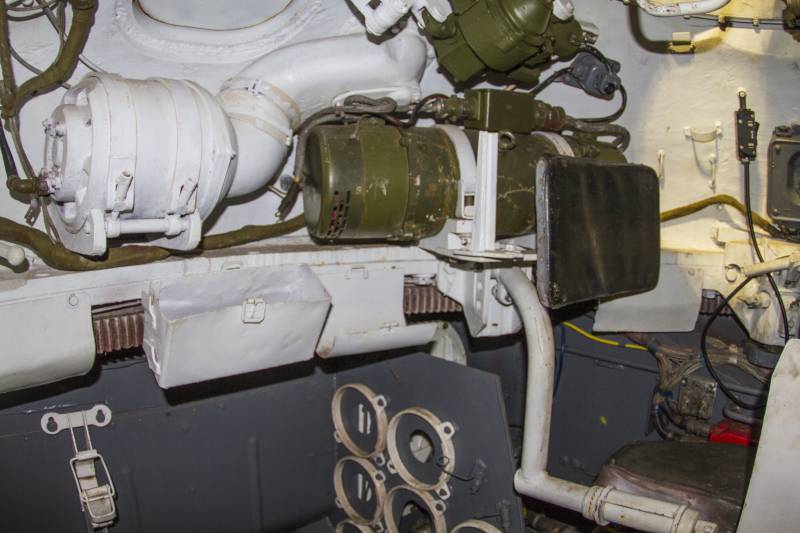 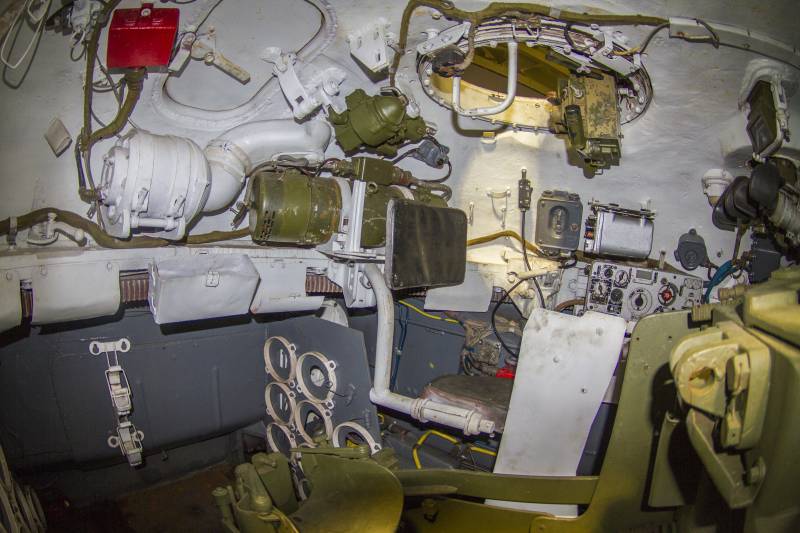 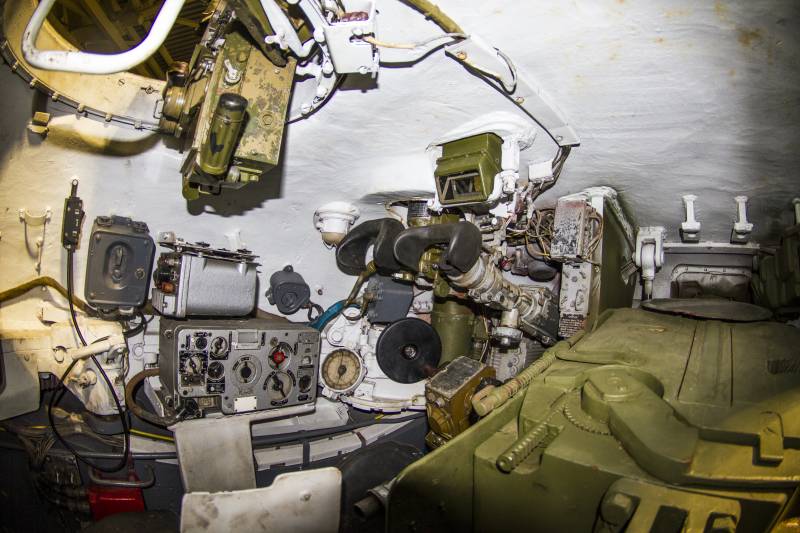 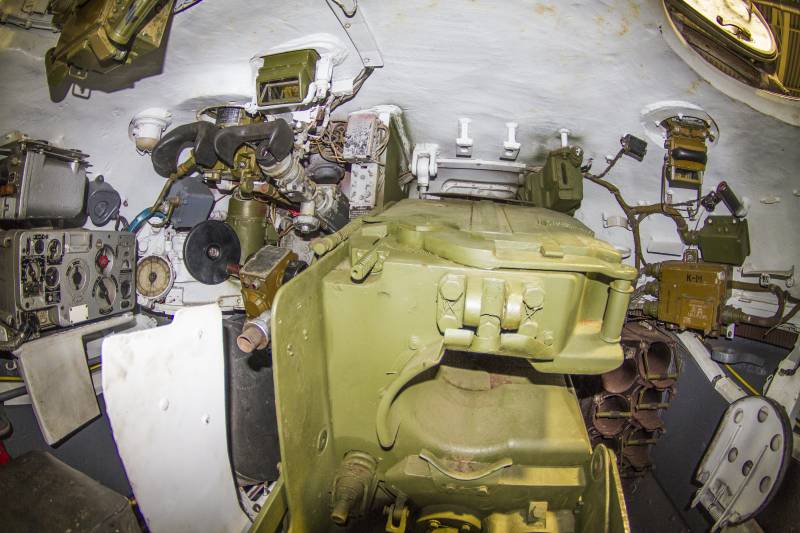 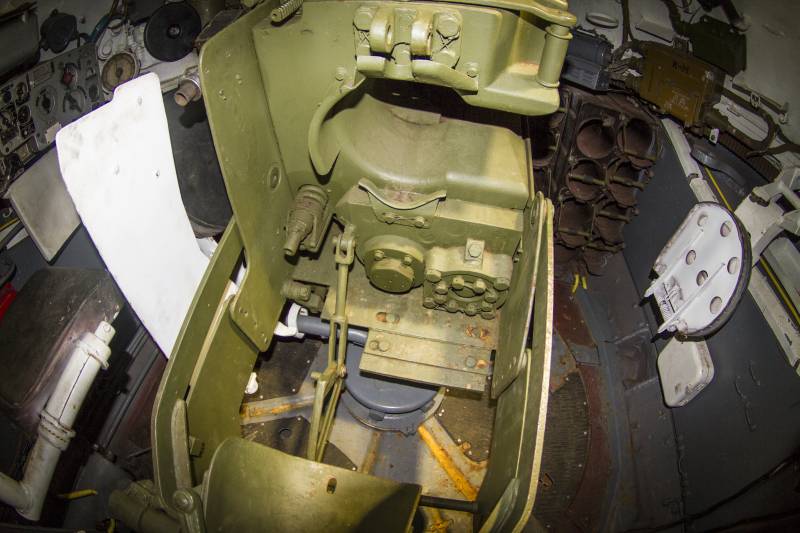 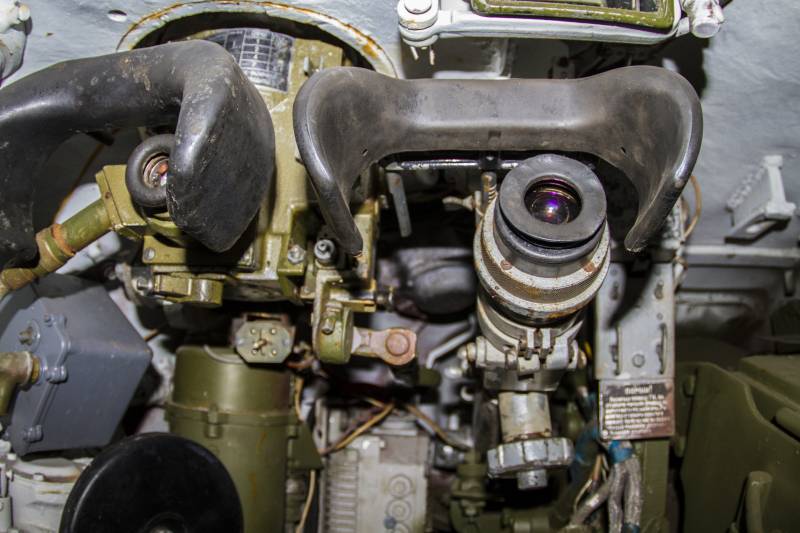 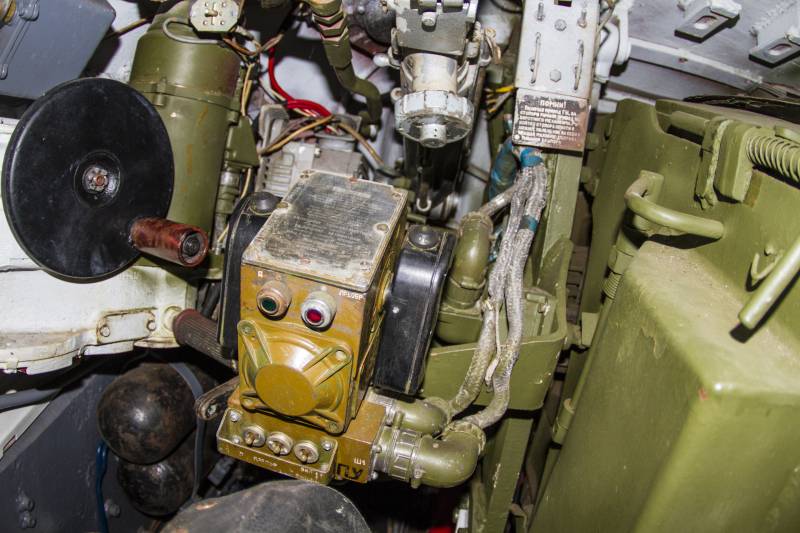 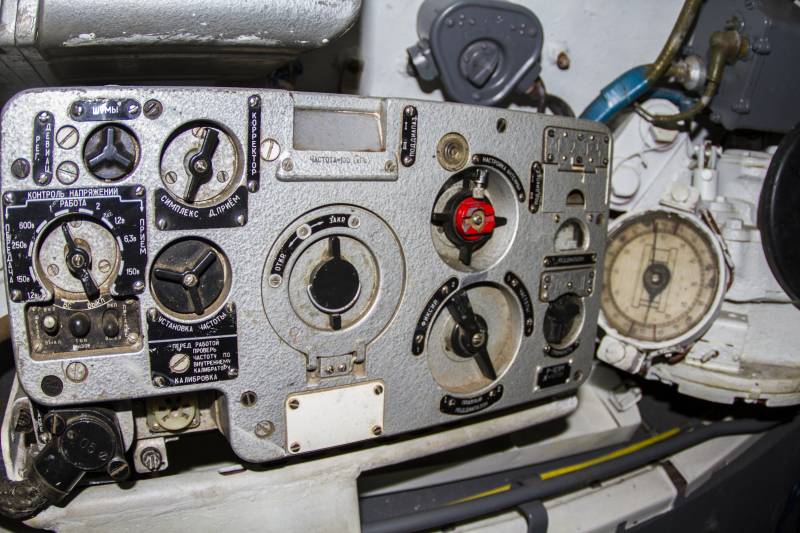 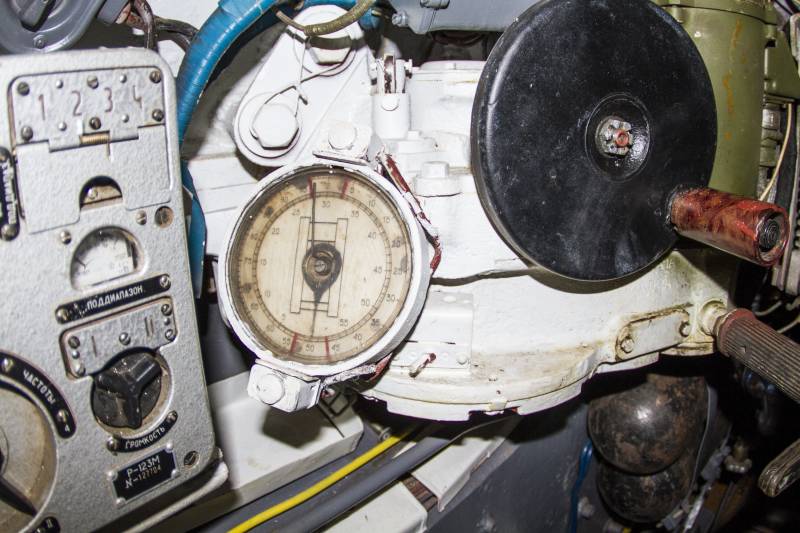 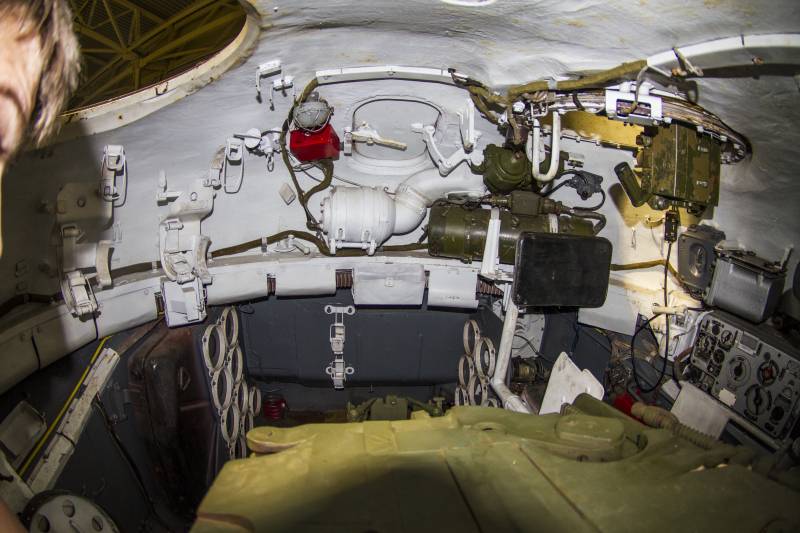 The roof of the tower housed two hatchways that opened ahead: the left one for the commander, the right one for the loader. 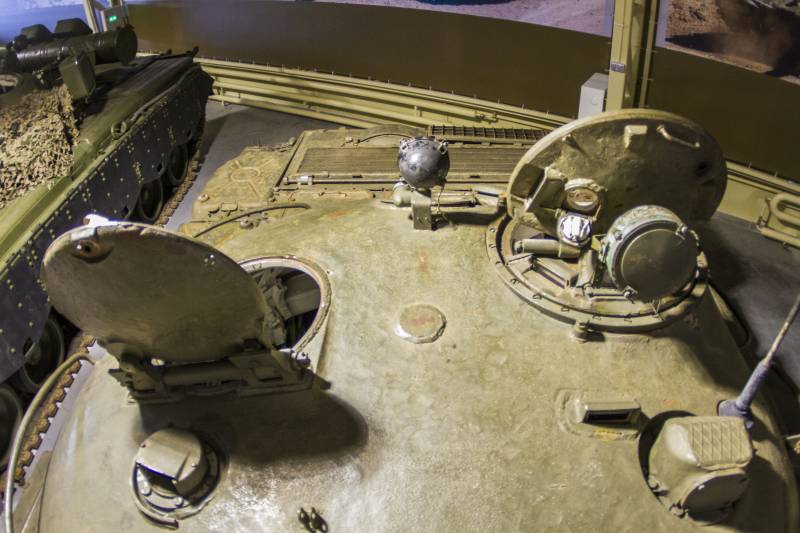 On tanks manufactured with 1972, a large-caliber anti-aircraft gun DSHKM was placed behind the loader's hatch. Ammunition for the machine gun consisted of 300 cartridges in tapes.

Ammunition for the gun consisted of 40 shells and was located in the fighting compartment. Since the unitary cartridges weighed very well, from 22 to 30 kg, the most physically strong guys were selected for the role of loaders. But at the same time a large weight of the projectile became the reason for the development of the automatic loader.

And AZ "Acorn" was developed and even tested on the "166 Object". But T-62 went into a series without AZ, which had been brought to mind for quite some time. And “Acorn” served as a prototype for creating an automatic loader for the T-72 tank.

The tank was equipped with an anti-radiation protection system that could operate in both automatic and semi-automatic mode. With the help of a blower-separator, an overpressure was created inside the tank, which did not allow poisonous substances to penetrate inside the machine in the event of its depressurization.

The T-62 was equipped with an automatic fire extinguishing system. Fire extinguishing equipment extinguished the fires in the appropriate compartment with a mixture consisting of ethyl bromide, carbon dioxide and compressed air. It could also work in both automatic and semi-automatic modes.

T-62A released an experimental series of the number of 25 tanks, and then stopped its production, so as not to "produce" an excessive number of models. 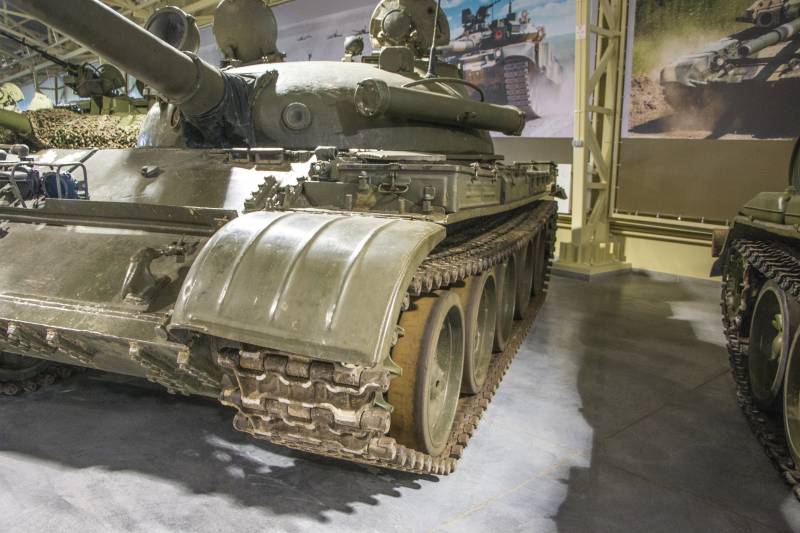 The T-62 was first shown at the 7 Parade on November 1967 of the year. The first combat use was attributed to the events of 1968 of the year in Czechoslovakia, but since there were no active hostilities there, it is not a full-fledged use. 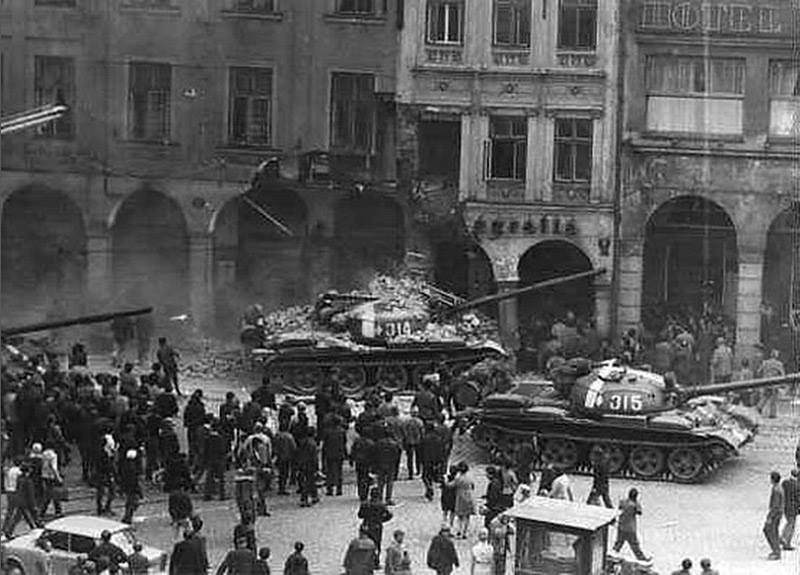 T-62 received a real baptism of fire in 1969 during the Soviet-Chinese conflict on Damanskiy Island. A platoon of three T-62s tried to help the border guards defending the island by navigating the Ussuri branch that separated them on the ice.

The Chinese shot down a tank of Colonel Leonov, who died along with the crew and could even seize the tank. Chinese experts carefully examined the T-62 and used the Soviet technical solutions found in it when designing their model of the Tour 69 (WZ-121). 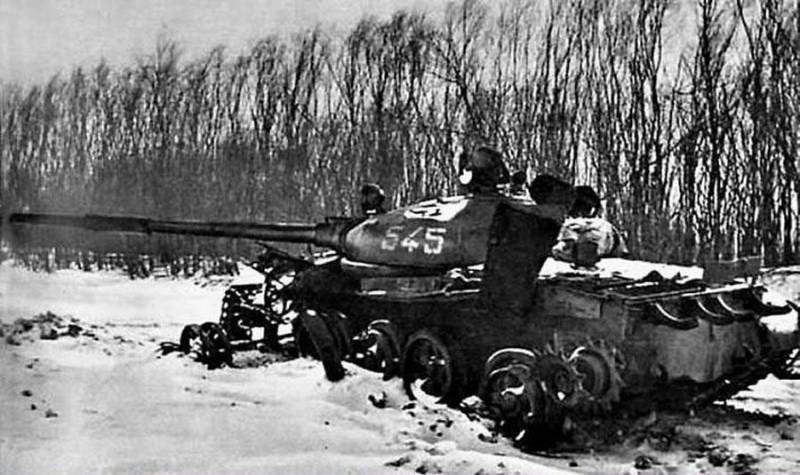 T-62 was actively used in Afghanistan. Naturally, the car that showed itself well in the battles began to be transferred and sold to other countries. 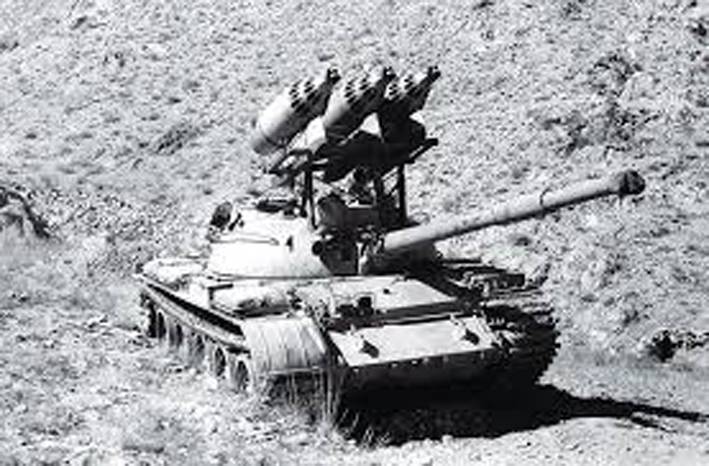 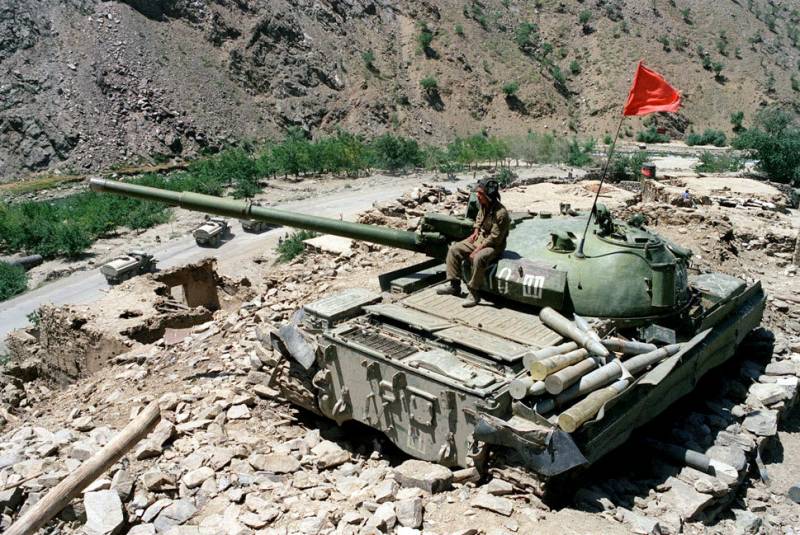 The tank fought a lot in the Middle East as part of the Syrian and Egyptian armies during the Six Day War and the Doomsday War. 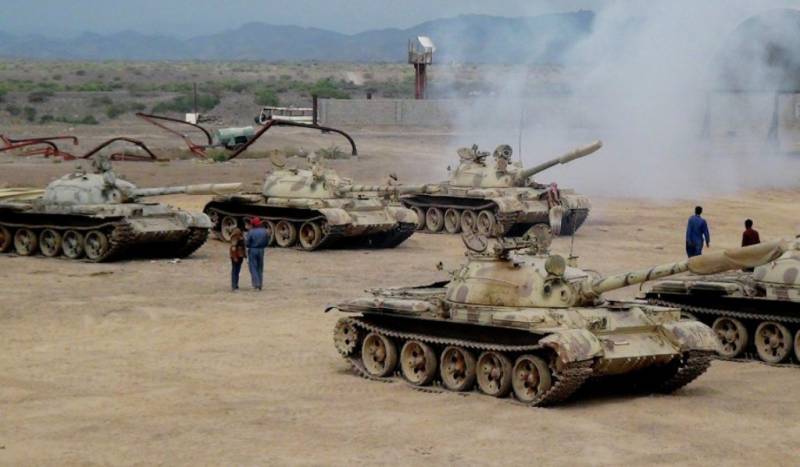 Subsequently, T-62 under the name “Tiran 6” fought in the Israeli army, as more 200 machines were simply abandoned and lost by the Arab military due to command errors and unprofessional crews.

Syria later used its T-62 in the Lebanese 1982 war of the year. The Iraqi army actively used T-62 during the Iran-Iraq war of 1980 – 88, during the attack on Kuwait and during the defense during the Gulf war in 1991.
T-62 was used by Libyan troops during the invasion of Muammar Gaddafi’s troops into Chad in November 1986, as well as during the joint French-American operation “Dawn of Odyssey” in 2011.

Today T-62 actively participate in the war against terrorists in Syria.

In general, the T-62 has proven to be a worthy successor to the T-55. Equally simple, reliable, easy to maintain and maintainable.

The fighting showed that the maximum pointing angle of the gun at + 16 ° is insufficient, especially in mountainous conditions. Application in the deserts of the Middle East has brought problems during operation associated with dusting. Ammunition in 40 shots is quite good, but due to the large size of the shells, only part of the ammunition is located in the turret. For the same reason, used cartridges are not returned to the packs, but are thrown through a special hatch.

But in general, it was a great fighting machine of that era, which showed itself worthily on the battlefields.

Ctrl Enter
Noticed oshЫbku Highlight text and press. Ctrl + Enter
We are
Is the "old" well forgotten to become the "new"? Part-2. At the call of honor and dutyThe fire control devices of the Soviet and German tanks of the Second World War. Myths and Reality
59 comments
Information
Dear reader, to leave comments on the publication, you must to register.