Dmitry Ovcharenko: the hero who hacked two dozen fascists with an ax

July 10 2018
87
This is absolutely incredible. история 13 took place on July 1941, near the town of Arctic Fox in the Khmelnitsky region of Ukraine. Then the Germans were rapidly advancing, the ever-changing front line was so broken that at times it was unknown who you were running into at the next turn.


One of these unexpected meetings for centuries glorified the native of Lugansk region, Dmitry Ovcharenko, who with a simple ax and several grenades made the Nazis 50 run in panic, while “chopping” two officers and 21 soldiers into the cabbage. 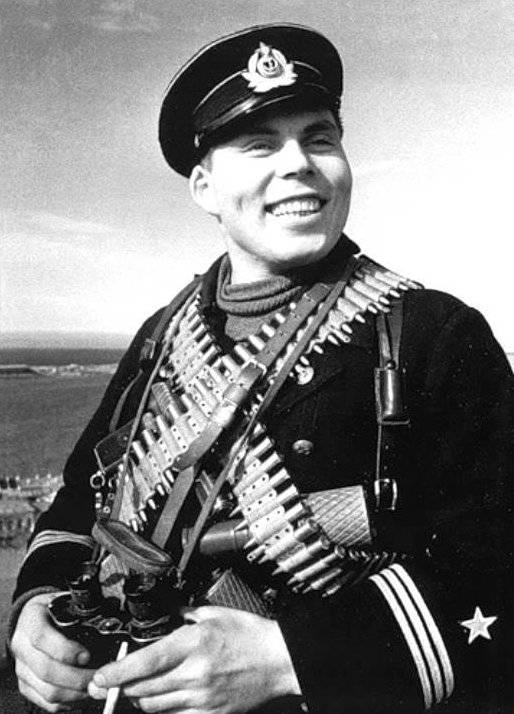 The ordinary son of a carpenter

Dmitry was a strong peasant. Born in 1919 in the present Lugansk region, in the village of Ovcharovo. In the village there was only an elementary school, but Dmitry did not aspire to universities, the character was not the same. After completing five classes, he went to his father's collective farm, following the rule: where he was born, it was useful there.

From his youth working in the field, Dima grew up to be a strong, hardy guy. And then the father took the guy to his carpentry workshop. According to the stories of fellow villagers, the boy was everywhere in his place. And in the company, and in work, and in school, especially if it came to work with your hands.

So he mastered the carpentry tool with ease. Moreover, Dima was familiar with the woodwork from childhood - he used to often help his father on trifles. Now he was approached as an adult with a request to put a bathhouse, to renew the crowns in the house, and to build the house itself. 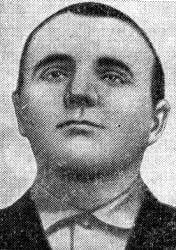 A good carpenter has always been worth its weight in gold, especially in times when socialist competition went everywhere and everywhere, and everything was full of slogans “Five Year Plan in Three Years” and “You Give It!” So ​​Dmitry's future was almost predetermined.

A strong business executive and a man respected on the collective farm would have come out of it. A light, fervent character allowed Dimka to have dizzying success with girls. So that without a family the guy would not stay. It remained to serve in the army and upon returning to think about the family and their own home.

In 1939, Ovcharenko was drafted into the ranks of the Red Army. By the time the Nazi troops attacked the Soviet Union, he had already been a well-trained fighter for two years and was famously controlling a machine gun.

Fighter of the Red Army

Dmitry was lucky and unlucky at the same time. In the first days of the war, in the meat grinder that was going on in Western Ukraine and in Moldova, thousands died. The Soviet Army did not yet know how to resist, while the Wehrmacht’s soldiers already had vast experience of offensive, honed in the territory of European countries conquered before the attack on the Union.

In one of these fierce battles under the Moldovan Balti wounded Dmitry. But it was wounded easily, nothing mortal - not to send to the rear, not to leave in the ranks. So, a torn wound, stitched, bandaged, twitch less, and heal. The guy was adapted to transport ammunition. They gave a horseman, a cart, showed a warehouse in the town of Arctic Fox, handed the appropriate papers.

Dmitry was a responsible person, he did not let his comrades in, the warehouses had not yet been either blown up or evacuated, so there was something to fight. So on July 1941 day of the year, when there were battles for the city of Balti, the Ovcharenko cart once again left the city and rumbled on the ground broken by the explosions.

The best defense is offense.

The ammunition was packed under a tarp and intended for a machine-gun company, where Dmitry served. The entire 4-5 was left for the location of the unit, but suddenly two trucks with German soldiers emerged from around the corner.

One of the three escort officers approached Dmitri, knocked out a rifle and ordered to show what was in the cart. Dmitry obediently went to the cart and threw the tarp. But Ovcharenko did not intend to give ammunition to the Germans. No one expected what happened next.

The fighter snatched the ax lying there from under the tarpaulin and with one blow blew the officer's head off. Three grenades one after the other flew towards the car. Chaos began. 21 German was killed, the rest fled. Furious, Ovcharenko chased the second officer with an ax, caught up with him in the gardens and cut off his head just like the first. Dmitry simply did not find the third officer - he did not wait to be remembered about him. 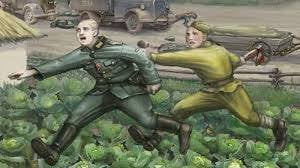 Panic is an interesting thing. From the surprise and unreality of what was happening in the ensuing confusion, not a single German soldier thought to use his own against Ovcharenko weapons.

Maybe everything would have been different, and we would never know about Dmitry Ovcharenko, but when suddenly among the peaceful picture suddenly shouts and explosions sounded, the driver of the second truck just “hit the gas” and retreated, taking about half of those present.

The rest are less fortunate. The raging Ovcharenko crumbled the wounded with an ax like cabbage. He had no mercy on the enemy. And then no one spoke about humanism. 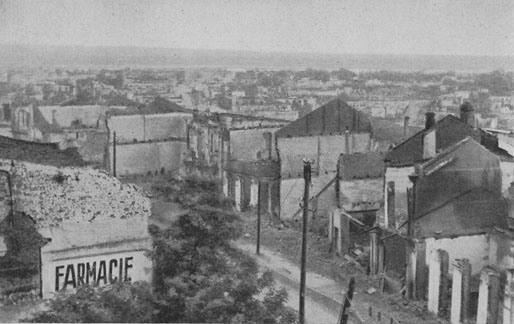 Ovcharenko's ammunition was brought intact and on time. But at the same time, as he was, covered in blood, he drove into the headquarters and handed over to the commanders all the documents, charts and maps that he had found at the soldiers and officers he had killed.

The headquarters did not believe the fighter's story, especially since Dmitri was delayed with returning for a couple of hours, and everyone was already thinking about whether the convoy had died and whether he had deserted. And the one and the other was not uncommon in the early days of the war. But Dmitry nevertheless appeared, and in the headquarters it was decided that the fighter was simply making excuses for being late and tells stories in an attempt to avoid punishment.

But the bloody uniform, the brought papers and soldier's medallions nevertheless forced the command of the unit to check the words of Ovcharenko. Ovcharenko himself was taken into custody just in case. They equipped the mobile reconnaissance unit, which, upon return, confirmed the words of the soldier. At the same time they brought an ax that had become legendary and forgotten by Dmitry on stump.

Because of the rush around the documents brought and the general confusion of those days, Ovcharenko, forgotten by all, spent three days in custody. He was remembered and released only after they realized that they would have to retreat.

The reward will wait ...

Maps helped a lot in the rapidly changing battlefield environment. But Dmitry was awarded for this unprecedented feat then. The command recalled him in August of the same year, when the name Ovcharenko once again emerged among many submitted for awards.

After the incident with the ax some two weeks passed, and Ovcharenko was already in the ranks. He simply escaped from the hospital to the unit, even though because of the exercises with an ax, he had to rewrite the already healed wound, because of which he was transferred in his time to the wagons.

Each person was counted, and even died by the thousands, so they looked through their fingers at the violation of the charter and brought the soldier back to the machine gun platoon. Only now as a machine gunner. In the battles for the height of 239,8, Ovcharenko proved himself a hero again, not allowing the Nazis to lift their heads off the ground.

It was then that Lieutenant-General Ryabyshev and a member of the military council, Cornius, signed a warrior's presentation to a well-deserved reward: the title - Hero of the Soviet Union. 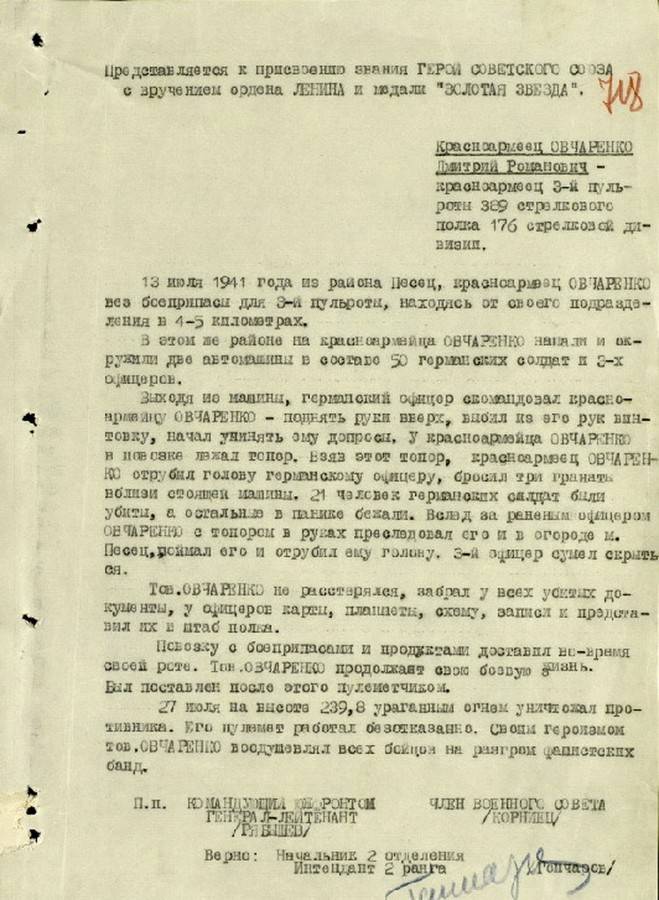 Only 9 in November 1941 of the Year by the Decree of the Presidium of the Supreme Soviet of the USSR “for the exemplary performance of the combat tasks of the command on the front of the fight against the German fascist invaders and for showing courage and heroism”, Ovcharenko Dmitry Romanovich was awarded the title Hero of the Soviet Union.

In the future, Dmitry Ovcharenko fought like everyone else, especially didn’t put his head under the bullets, but wasn’t noticed in cowardice either. He was not very friendly with discipline, so he remained a simple soldier who liked to go AWOL, drink a little and tell young people some military tales. 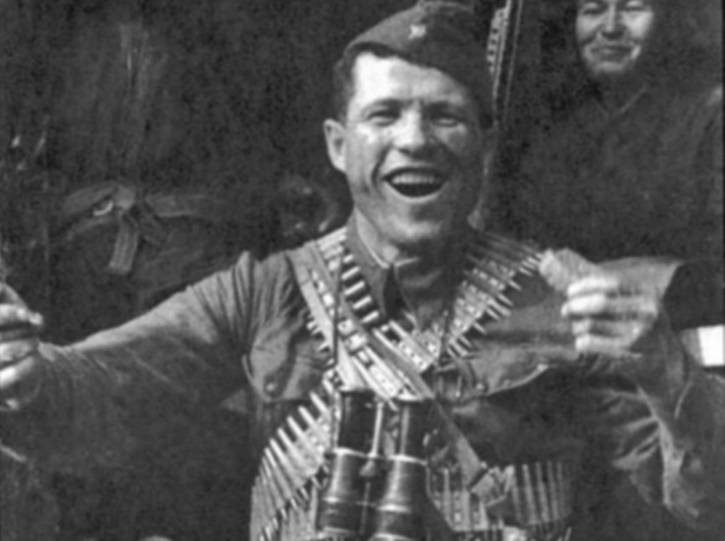 Young replenishment on halts loved to listen to the story of his feat, which each time was accompanied by new details, richly flavored with strong words.

The fighter failed to live up to the great Victory for only three months. In the battles for Hungary, Dmitry was badly wounded and died at the 28 hospital in January 1945. In his native village, a countryman is remembered and honored, his monument always has flowers, and the street bears his name.