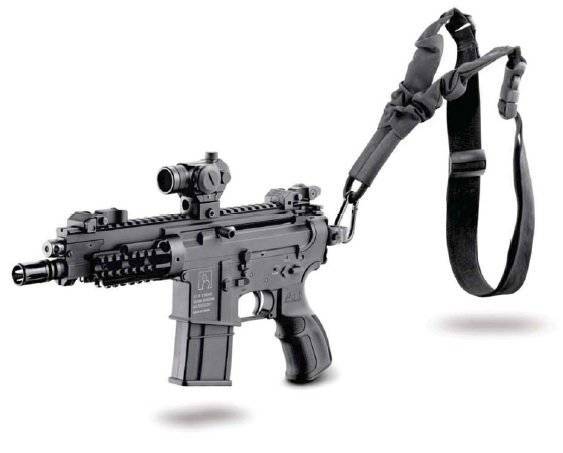 At the 4-th annual exhibition Israel Defense Exhibition for the Army and Police (ISDEF), held in 2010-th year in Tel Aviv, the company Silver Shadow Advanced Security System presented a compact machine Gilboa PDW AR-15 (full name Gilboa Assault Pistol Rifle or Gilboa APR). Gilboa APR is a fully automatic. weapon Personal Defense (Personal Defense Weapon, PDW). Like the Tavor automaton, the name Gilboa comes from the eponymous mountain located in northern Israel. In developing the new machine, the design of some components of the M-16 and M-4 automatic rifles, in particular the lower part of the receiver, was used. This allows the use of standard M-16 and M-4 stores. The upper part of the receiver was developed by Silver Shadow. Both of these components have been completely reworked to increase their rigidity and increase manufacturing accuracy. They are made of 7075 aluminum alloy on CNC machines. Automatic allows semi-automatic and automatic fire. 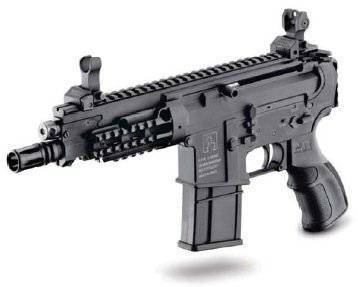 The Israeli company Silver Shadow Advanced Security System Ltd (SSASS) is owned and operated by Amos Golanam. She is known for her modifications and customization of weapons. In particular, it is behind the development of the system for firing from around the corner of Corner Shot. In addition, it offers its customers an upgraded M76 sniper rifle (based on the design of the Soviet Kalashnikov assault rifle, the Zastava M76 sniper rifle was developed in the mid-seventies at the Yugoslav arms factory Crvena Zastava) called Timna (Timna), also known as Mountain on the South, in the Yugoslav arms factory Crvena Zastava, also named Timna in the Yugoslav arms factory, named Timna (Southna), also known as the Mountain in South Africa, Crvena Zastava, named Timna (Timna). The Timna sniper rifle with a silencer based on the tested design of the Soviet Kalashnikov was adapted for firing heavy, high-speed ammunition with western 7.62 / 51. It allows snipers, both military and law enforcement, to work with maximum secrecy, even from close range, as well as from maximum distance. The rifle is equipped with a barrel Shilen Rifles production and a modern silencer for the entire length of the barrel developed by Silver Shadow, which leaves almost no acoustic signature. 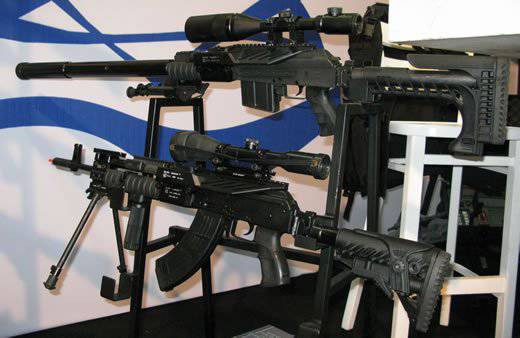 In addition, Silver Shadow offers a modernization package for AK-47, AK-74 assault rifles, turning any standard Kalashnikov assault rifle into a more modern modular weapon capable of carrying a wide range of optics and accessories on standard Picatinny rail. The upgrade kit includes the replacement or improvement of the sight, a modular frame, replacement of the original forend. As a result, the weapon has four Picatinny rail for attaching various accessories. The kit also includes a front handle with peripheral Picatinny rails for mounting optical sights, a telescopic (like on the M16) or folding butt, ergonomic vertical grip and much more. Improved flame arresters (reducing the muzzle flame by 29%) and recoil suppressors (actively reducing the return by 25%) can also be added. Removable bipods can also be added to allow the installation of a grenade launcher and further reduce recoil. 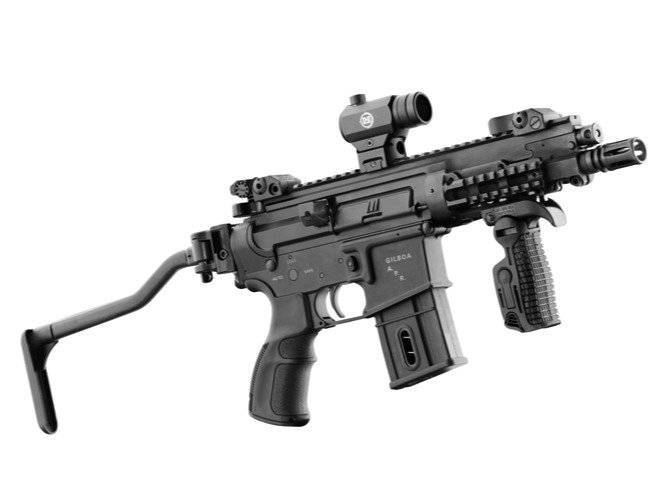 The Gilboa comes in a variety of sizes and configurations, from the smallest 2.25 kilogram ATP automatic rifles / pistols, short and standard versions, to long-barreled 3.55 kilogram Designated Marksman Rifle (DMR) rifles. The ATP model is 51 centimeters long, equipped with a 18 centimeter barrel as standard, but for special applications it can be equipped with a trunk shortened to 11.5, see. The DMR model is a highly modified version of the Gilboa automaton designed to provide military units and law enforcement agencies with considerable fire power at combat distances. It is equipped with a heavy 45: 7: 1 heavy-duty barrel and a centimeter barrel for using more powerful ammunition. 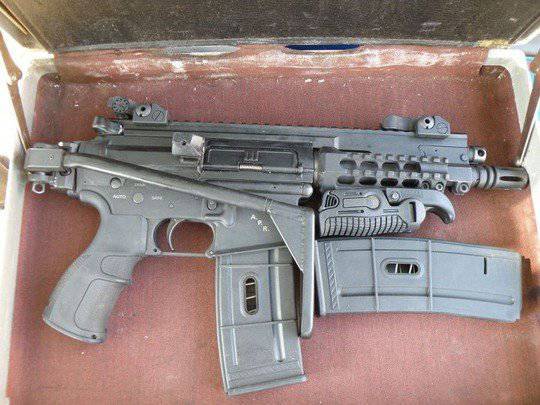 The strength and reliability of Gilboa has been improved through the use of modern technological processes that ensure quality and reliability in the most extreme conditions. Shortened Gilboa (Gilboa Shorty) was designed specifically for military professionals and law enforcement professionals who need a compact weapon with the firepower of a full-fledged carbine. The assault version of Gilboa APR was developed specifically for combat operations in urban environments. It combines the advantages of both an assault rifle and a pistol. 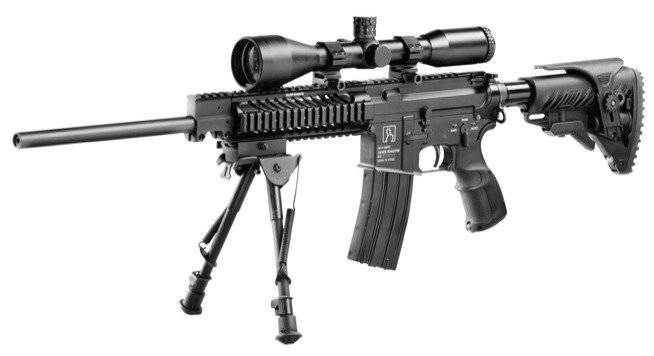 The Gilboa design allows you to effectively use these weapons at all combat distances, from zero to 300 meters. A specially designed Silver Shadow vapor vent ensures a cleaner operation of the machine with less side heating, which is especially important when used in extreme conditions. The new patented design includes, in particular, the vapor system and the return spring. The weapon is equipped with a foldable butt attached to the rear Picatinny rail. The shutter handle is located on the right (left) side. The machine is equipped with a Picatinny top and several more straps for mounting optics, lasers and other accessories. 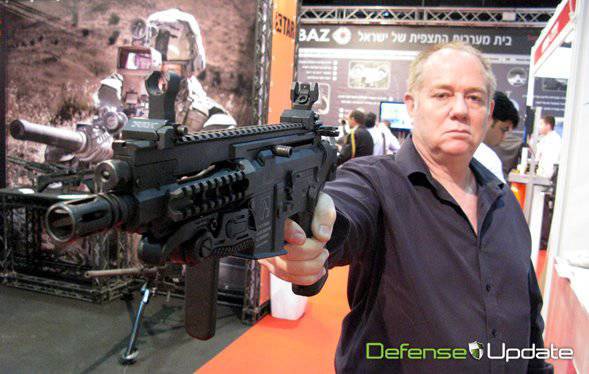 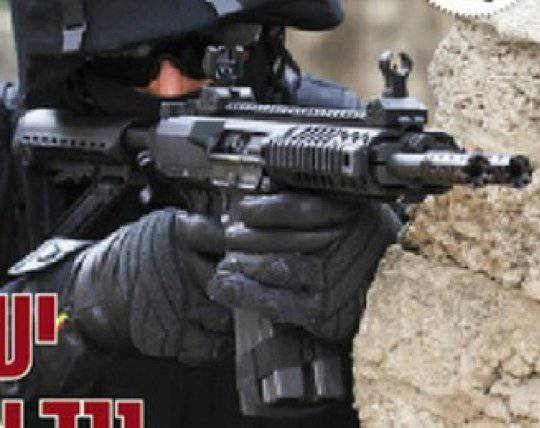 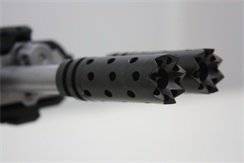 Silver Shadow has intrigued the public by saying that it will soon introduce another product from the Gilboa series. This time it will be a new assault rifle with a double barrel - unique and the first of its kind among the weapons produced in Israel. According to the company, the new weapon will increase firepower and improve shooting accuracy, but will still use standard ammunition. The company will present a new weapon at the Eurosatory exhibition in Paris in June 2012. 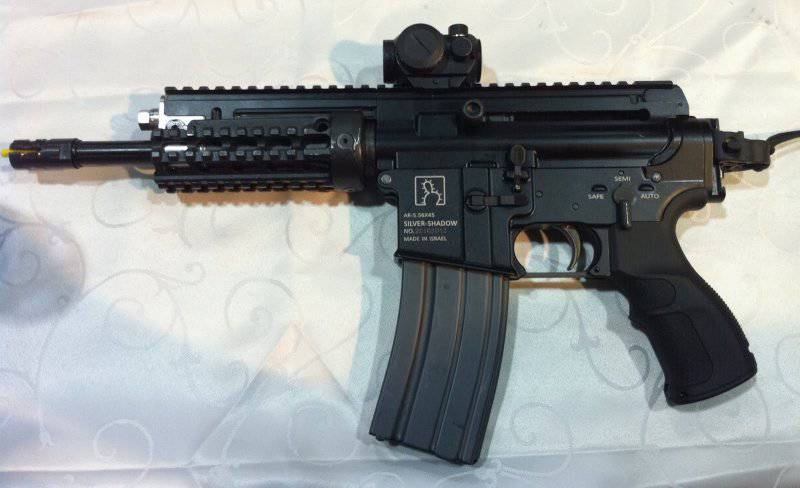