Rifles by countries and continents. Part of 21. Spain: Women and Mauser (continued)

July 12 2018
14
Of course, the most generous and major supplier of Republicans was the Soviet Union, which had strong political ties with the left-wing government of Spain. Since September 1936 has been delivered to Spain. weapons from the Soviet arsenals. At first they sent what was left after the First World War, when the Russian army, desperate for small arms, bought almost everything that could be bought, begging around the world. Therefore, the Spaniards were sent Japanese, English, French and Italian rifles, which was convenient, because no one could say that they were sent from Moscow. However, it was obvious to Stalin that the Republicans would need not only this old rubbish, but also modern and high-quality weapons. Therefore, at least 80 000 rifles were sent to Spain, of which more than 77 000 were upgraded M1891 / 30 rifles. Many of the M1891 / 30 went to Spain directly from the conveyor of the Tula and Izhevsk weapons factories. 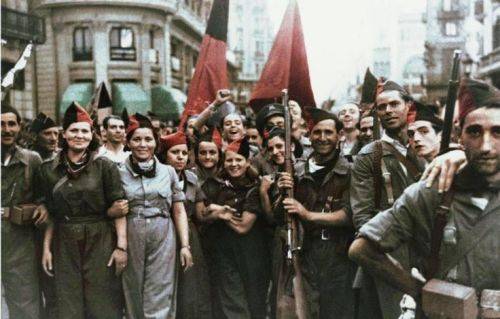 Anarchists from Barcelona. And also women, and also Mauser ...

Interestingly, the American brigade of Abraham Lincoln, part of the Republican international brigades, was armed with our own rifles - apparently, 1891 and 1891 / 30 samples. According to one veteran, the “legend” accompanying them was such that they were obtained from Mexico. Therefore, Republican soldiers called these rifles "Mexicans" and this name was preserved for them. 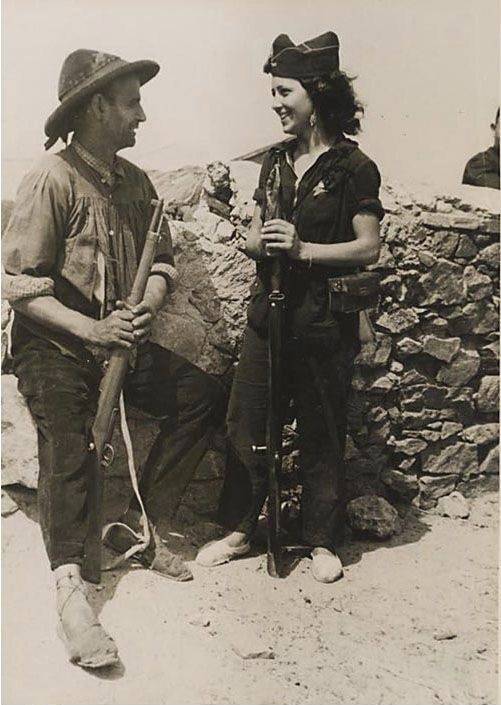 "I found someone to look with such a smile!" 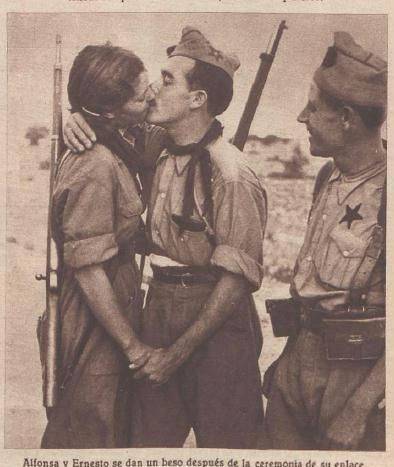 “How nice, shoot - kissed! He shot again, kissed him again. And everyone looks and envies! ”

Interestingly, among these rifles were even samples of the 1916 production of the year, that is, today these “Mexican-Russian” rifles are a real museum rarity, since in the USSR all rifles from the tsarist era were later converted using the model M1891 / 30. 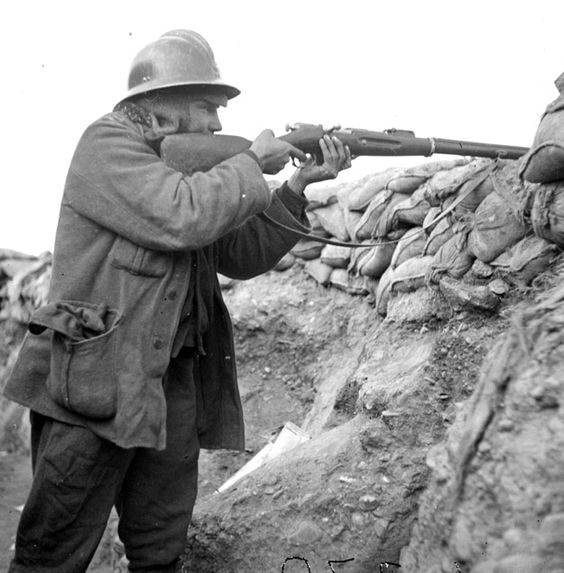 Well, finally, and a photo with "Mosinka." 15 International Brigade. The positions of the battalion of the MacKenie-Pappino under Serigo de los Vanos, February 1938 of the year. 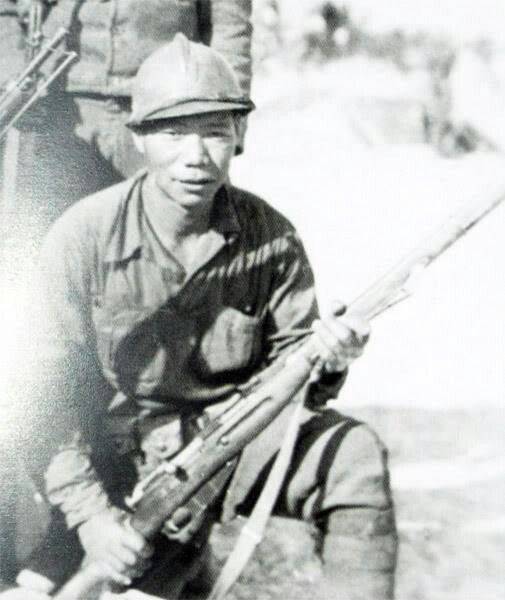 And here is also a rare photo - an internationalist-Chinese, and even with the “Mosinka”. 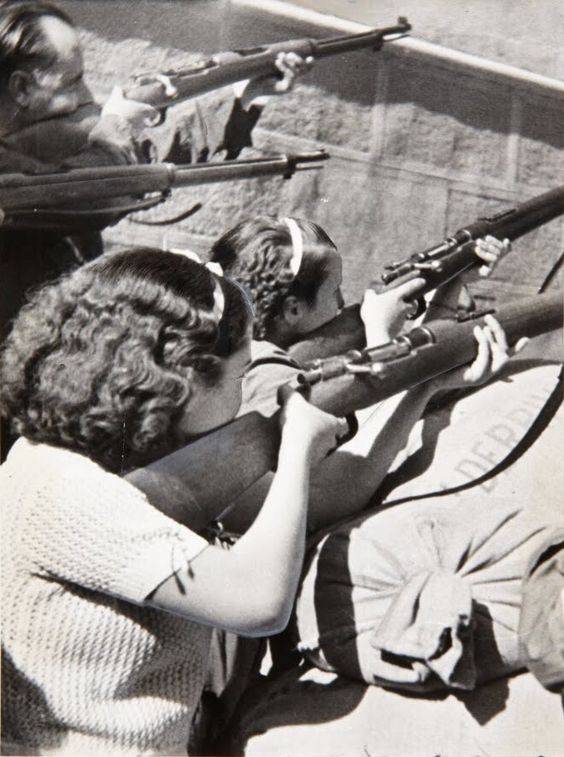 "Women on the other side" - defenders of the Alcazar fortress in Toledo are firing from the Mauser on the Republicans!

Now let's consider the actual Spanish rifles, which entered service with the Republicans and nationalists, as well as those who were in service with the Spanish army in different years. First of all, it is the MXNMX mouser of the year. By the way, 1893 rifle became a total of trophies of Americans, which then entered the Springfield arsenal. In his documents there is a record (dated March 17651 of the year) that 1899 rifles were repaired and cleaned at the price of 2578, 2 dollars for each. It also says that often it was necessary to assemble one of two rifles, which significantly reduced their stocks. Nevertheless, the arsenal sold to commercial dealers over 73 thousands of Spanish Mauser, the sale of which began in the same 15 year, and ended in 1899-em!

Carabiners 1895, Americans in Cuba seized 676 pieces, of which Springfield arsenal sold 478 through arms dealers. By the way, the only constructive difference between the carbine and the rifle, in addition to the smaller length and front sight, was the bolt handle - a straight rifle, but bent down at the carbine. However, in 1898, the bolt was improved in the infantry rifle. They added another locking protrusion, the third one, right in front of the reloading handle. By the way, the production of 1895 rifles at the Oviedo plant continued from 1897 to 1927 year, and the total number that was produced there was 90000 copies. From 1916 to 1936, 290000 M1916 rifles were also released there. This “short rifle” had a characteristic tangential sight with a rising sighting instrument and a fixed digital bar, and a reloading handle bent down. The barrel and receiver are blued, but the bolt is chrome plated. This rifle is known in two versions - the first model and the second. The second had a different sight - Langevizier, which just raised and lowered the bar with the divisions. 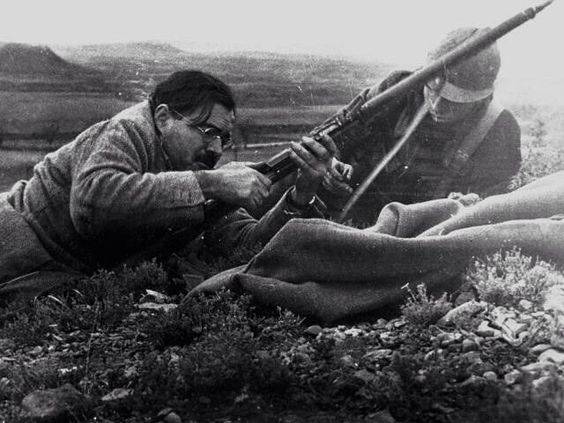 Ernst Hemingway learns to shoot a Mosin rifle near Teruel.

The same M1916 rifle of the year became the specificity of the 6 weapon model for the Guard of Civil. All the difference lies in the caliber, which on the "Guards rifles" is equal to 7,62-mm CETME and ... stamp on the chamber, which shows a crossed sword and a Roman fascia. Belt and ammunition leather white. 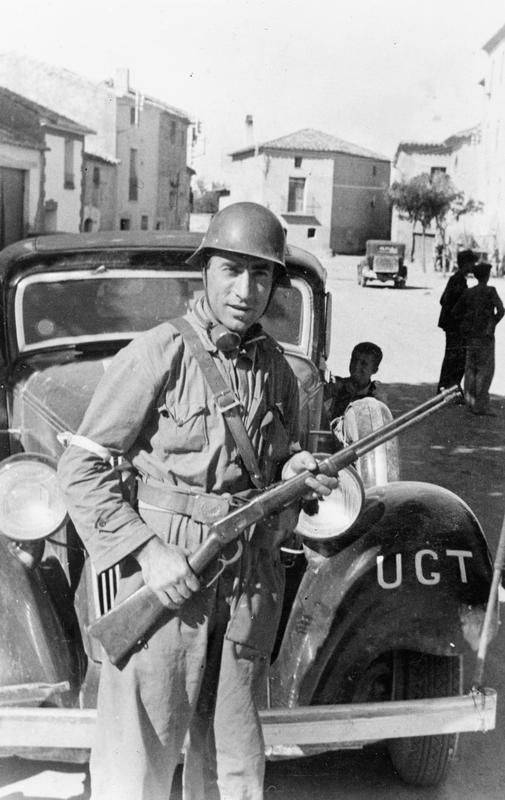 They made so many carbines "El Tigre", and the photos with him are, of course, but few!

Another weapon of the “Guard of the Civil” was the El Tigre carbines, a Spanish copy of the Winchester carbine with a barrel gantry of the 1892 model of the year, which was launched in Eibar between the 1915 and 1938 years. At one time, Oliver Winchester visited Spain, after which the 230 of its M1873 carbines (with 22-inch barrels, metric sights, and a full set of accessories) were sold to the Spanish military for use by royal bodyguards. 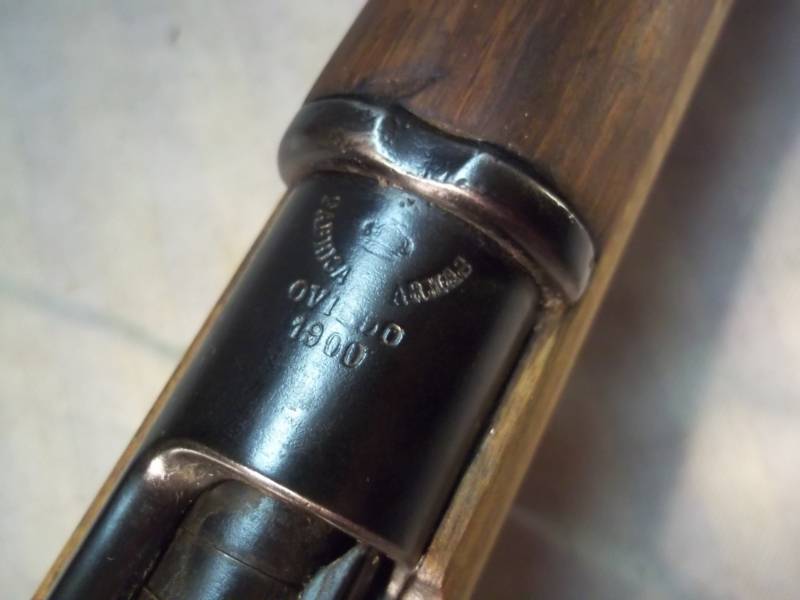 The emblem of the arsenal in Oviedo.

Then more than 2500 were later produced under license in the Spanish arsenal in Oviedo in 1890-s to retain staff until the arrival of modern equipment necessary for the production of the M1893 mouser. In fact, it was the "Winchester" M1876, but with a chamber for 0,44-40 cartridges. Karabin entered service 14-th regiment "Guard Civil". After 1893, an unknown number of carbines were received from firms based in Eibar, but they were of lower quality than the models produced in Oviedo. 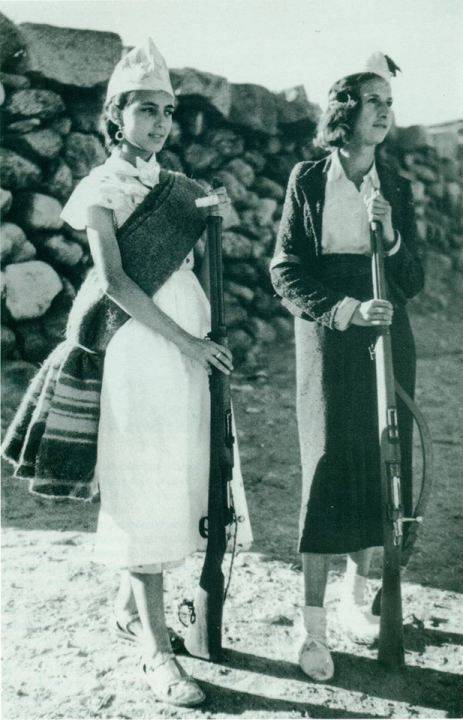 Two more beauties with Mauser. Especially good is that on the left ... Easy to wear, that's just it, but in the South of Spain it can be very hot! 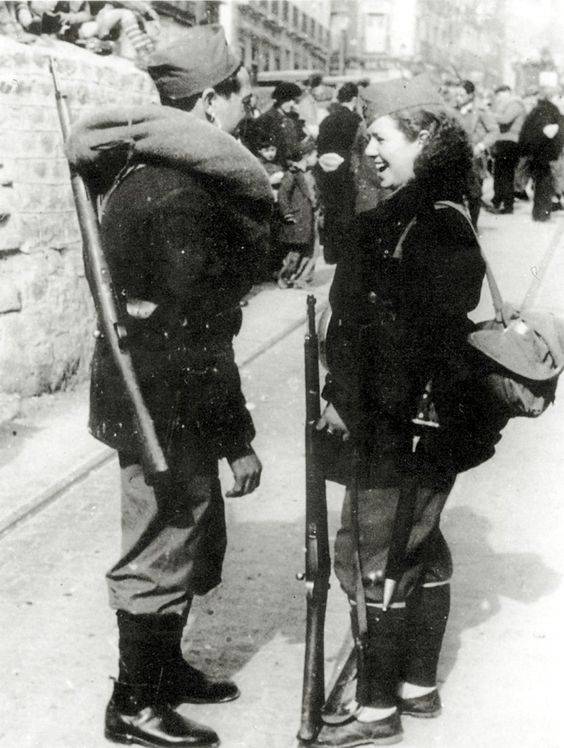 And there, where in Spain “girls with Mausers” are cold, they dressed like this!

Then, in 1915, the production of these carbines began at the Garayt and Anitu enterprise, but then, apparently, was interrupted by the war. During World War I, this company supplied revolvers to the allies based on Smith and Wesson designs and 7,65-millimeter Browning pistols, but then in 1923, the company began commercial sales of the El Tigre rifle. 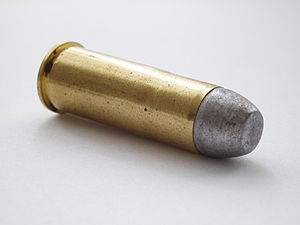 The sight was mounted on a military model, similar to the M1893 rifle, designed for a range of 1000 meters. 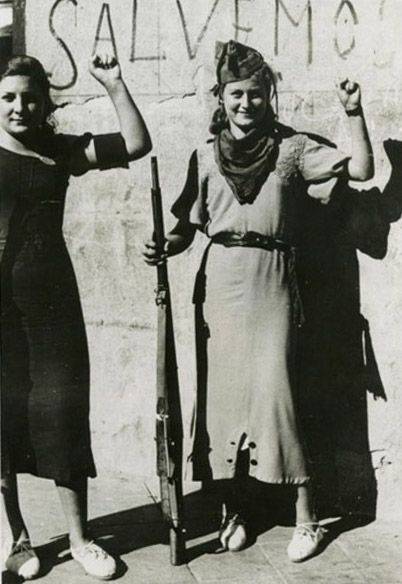 And again the anarchists! Well, where in Spain at that time without them? Nowhere! “Anarchy is the mother of order!”

All these carbines in Spain were released ... more than one million! It was mainly used by hunters, foresters, as well as police, prison or private security guards, who needed compact but powerful weapons for use in confined spaces. For example, these carbines were armed railway units "Guard Civil". Many carbines were then sold to Latin American police agencies or prisons, which led to a widespread misconception that El Tigre was produced in Mexico or in some other Latin American country. 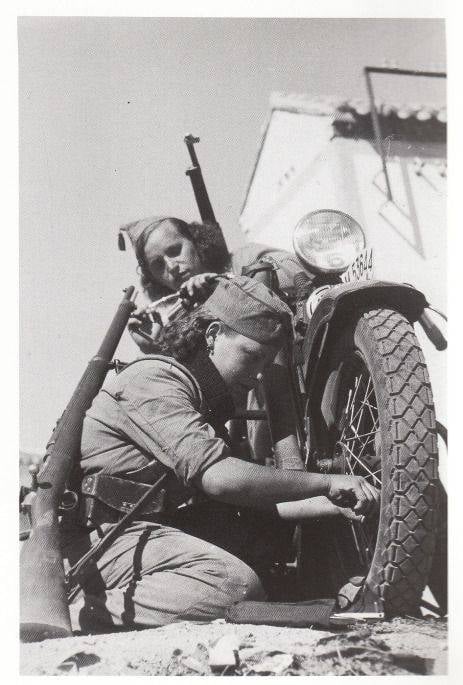 As always and everywhere women in Spain were masters of all trades. Repaired motorcycles and drove them ... 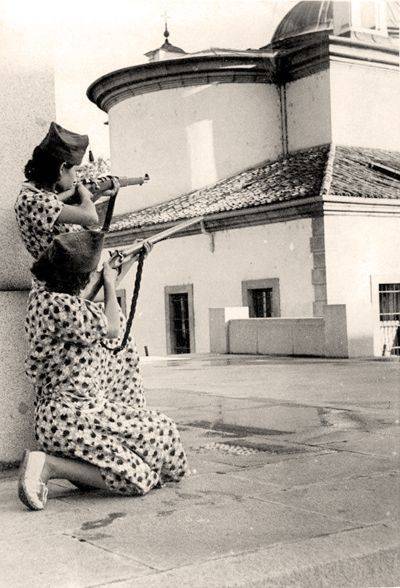 Participated in street battles, and the one that went down to fight with a double-barreled gun at all ... 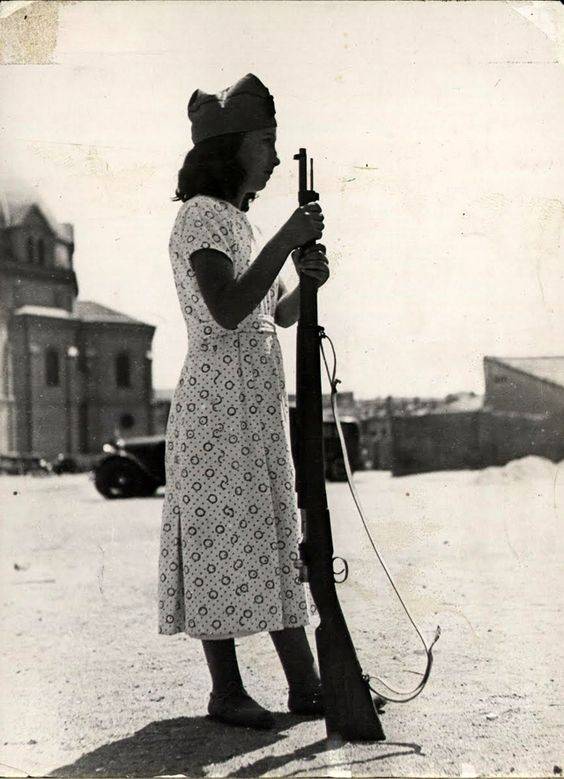 Protected public order. And all with Mauser!

Beginning with the 1940s and further into the 1950s and 1960s, a large number of these carbines were even exported as surplus to the USA. By the way, El Tigre carbines often appear in photographs of the period of the Spanish Civil War, but, as a rule, in the hands of the police, police or logistic support forces. 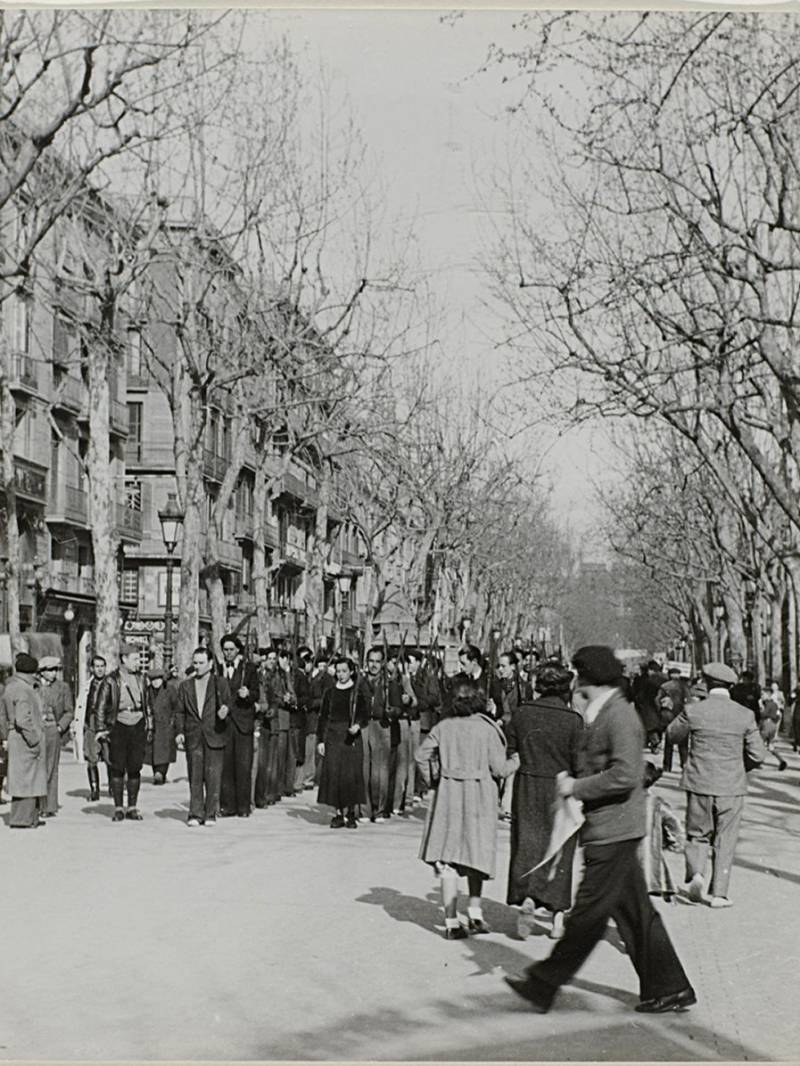 Entry to the militia on the Rambla in Barcelona.

As for the M1993 rifle, it was later perestvololena chambered for 7,62 × 51 mm and again got into the “Guard of the Civil” under the designation “Spanish Model 1916's” served as X. 50 of the twentieth century. All these rifles were made about 350 thousands. 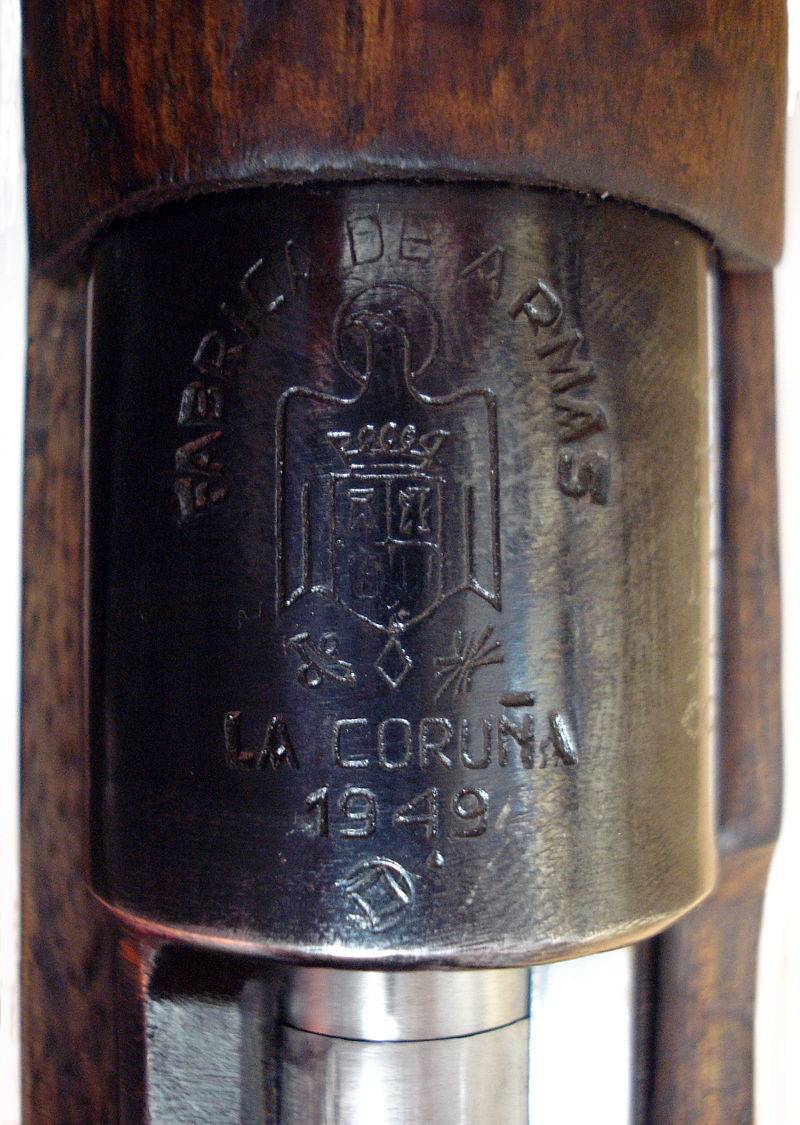 The emblem of the rifle M43 company "La Coruna". 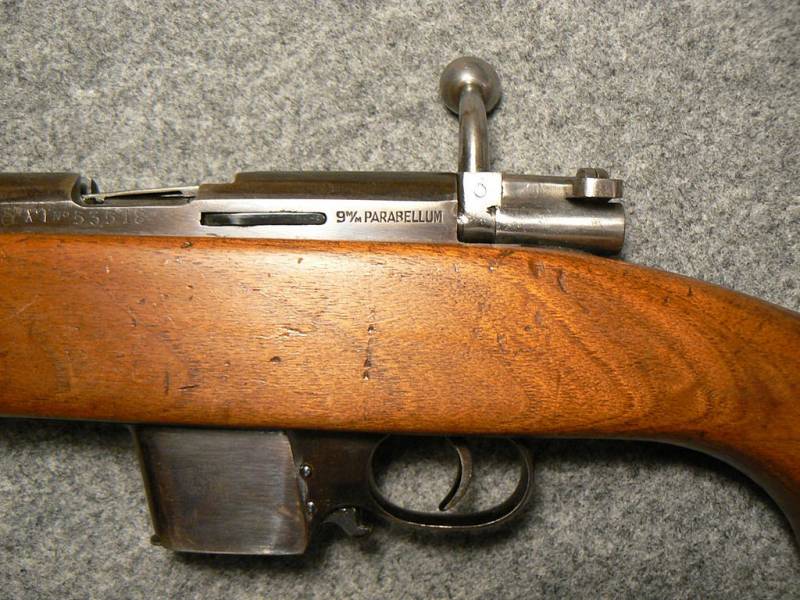 The shutter and shop carbine "Destroyer." 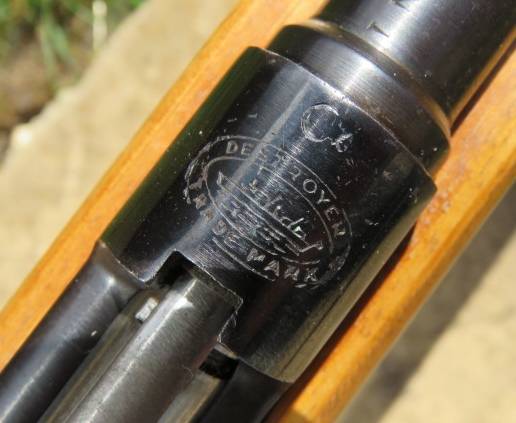 Finally, we note that another rifle based on the Mauser was also produced in Spain: created on the basis of the German 98k and manufactured by La Coruña, starting in 1944 with the army and fleet under the designation M43. Especially for the Air Force, the same rifle was produced, but designated as M44. Both rifles were equipped with a removable bayonet in a sheath. In total, more than 976 thousand of these rifles of the traditional German caliber were produced - 7,92 mm. Mass - the smallest among all other Spanish samples - 3,7 kg; magazine capacity - 5 rounds 7,92x57 mm; Muzzle velocity - 880 m / s; rate of fire - 15 rounds per minute; sighting range - 2 km.

And the Spaniards became famous for having created one of the few rifles FR7 and FR8. When you first look at this weapon, it seems that it is an automatic rifle with the removal of gases from the barrel into the barrel tube, that is, rifles designed according to the Browning and Garand scheme. But actually it is not!

Fastening the bayonet to the rifle FR-8.

Simply, the FR-7 and FR-8 rifles were created at the end of 1950 and the beginning of 1960 by modifying the old Spanish magazine rifles M1916 (based on M1893) and M1943 (based on M1898), respectively. And such an alteration was caused by the fact that when switching to new CETME automatic rifles of 7.62-mm caliber chambered for NATO, a significant number of old magazine rifles stored in warehouses turned out to be out of business. So they were altered in FR-7 and FR-8 for the initial military training and armament of the units of the same “Guard of Civil”. Rifles perestvolili, set new sights, and shortened the lodges. Structurally, it was the same Mauser, but with a muzzle-flame arrester at the end of the barrel, which could be used as a guide for launching rifle grenades. But the barrel was not a gas vent, but just a removable tube that serves as the basis for attaching a bayonet. Moreover, inside it is stored a set of accessories for cleaning. Sights consist of a fly in the earphone and a rotating disc in the shape of a disk, with a V-shaped slot for shooting at 100 meters and round holes for shooting at 200, 300 and 400 meters. All parts of the rifle are “gray” anodized, and some are blued. 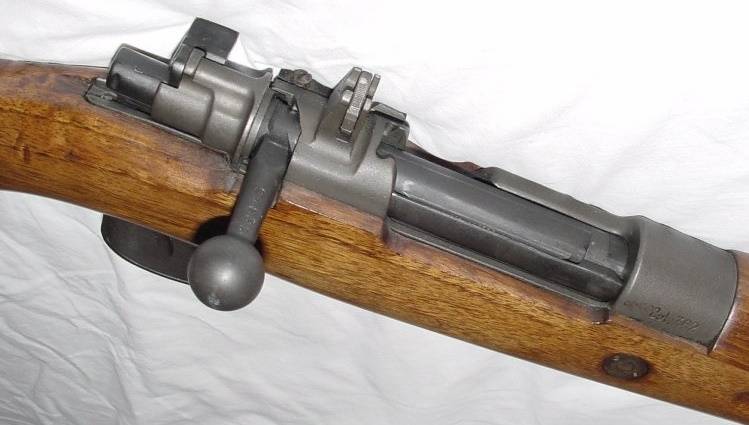 Details of the shutter and receiver. Well visible rack with a rotating disc sight.