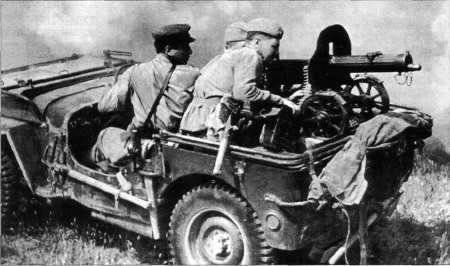 If 100% is the number of weapons in the Red Army on 1 January 1942, then on 1 January 1943, the number of submachine guns and rifles will be 180% and 1 January 1944, 280% and 210%, respectively. In defense, the average density of rifle-and-machine gun fire increased from 450-1,2 bullets per minute per linear meter in the first period of the war to 1,6-9 bullets per minute in the third period. At the same time, the depth of the continuous rifle fire decreased to 12 meters, since the main contribution was made by submachine guns.

During the war, the importance of machine-gun fire remained in the military air defense and air defense of the country. From the 3837 aircraft that were shot down by the front forces in the period from 22 June 41 of the year to 22 of June 42 of the year, 295 was shot down by anti-aircraft machine gun installations, 268 - by rifle and machine gun fire of the troops. In the air defense of Moscow on 22 June 1941, there were 105 anti-aircraft machine guns, on 1 January 42, 511, on 1 October 44, 686. The number of machine guns in the country's air defense during the war increased 12,1 times, as a rule, these were heavy machine guns. Their role in the country's air defense by the end of the war decreased, but increased significantly at the front. Despite the fact that the use of heavy machine guns in the production of barrier fire gave the benefit, it could not completely replace the special anti-aircraft installations. Large-caliber machine guns were much more effective than machine guns of normal caliber, however, here too, machine tools with a free lead were inferior to installations having a mechanical or electromechanical targeting drive and more advanced sights. 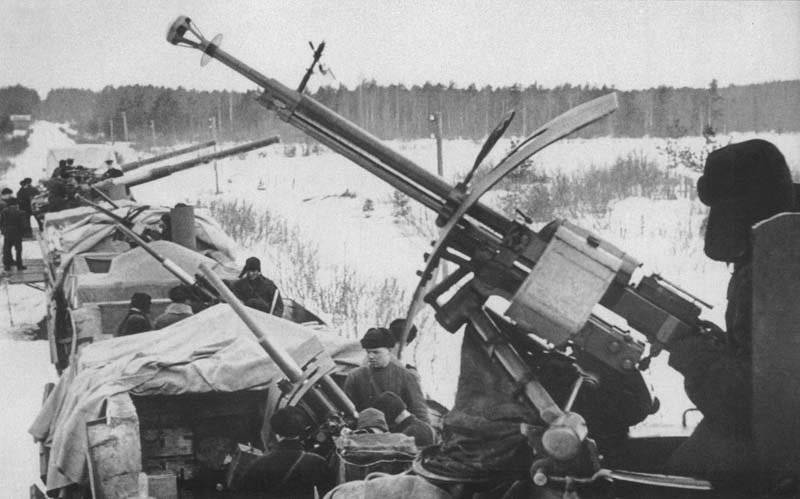 In different periods of the war, a change was observed in the weapons system not only of the USSR but also of Germany: 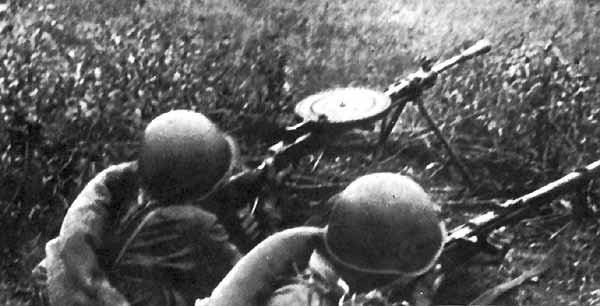 After the division of the order of battle into the forging and assault groups, the light machine gun began to always operate in the chain of separation. During the offensive, the machine gun was usually put forward first to a new position (the fire could be fired while on the move), and when leaving the battlefield - the last. A machine gunner as part of a tank assault force suppressed anti-tank weapons and covered the actions of the shooters. Tanks for heavy machine guns often played the role of "machine-gun".

Service requirements have been changed. At the beginning of 1942, competitions were announced for lighter and light machine-guns, submachine guns. The work was carried out in two directions: the modernization of the Degtyarev infantry machine gun and the development of a new light machine gun; one fighter could carry out the maintenance and carrying along with the ammunition load.

The machine gun at that time was the main group fire weapon of infantry (infantry) units capable of firing intensive fire with a 250-300 fire rate of fire per minute. Machine-gun companies equipped with machine-gun machine guns, as a rule, were attached to rifle companies as a rule. According to BUP-42, the machine-guns distributed into the depth and along the front covered the advancement of the unit, supported the attack, struck the enemy’s heavy weapons calculations, advanced into the depths and flanks, reflected the counterattack. Indirect fire practically did not use fire, as well as shooting over the heads. As a rule, machine guns fired from behind the flanks and in between. 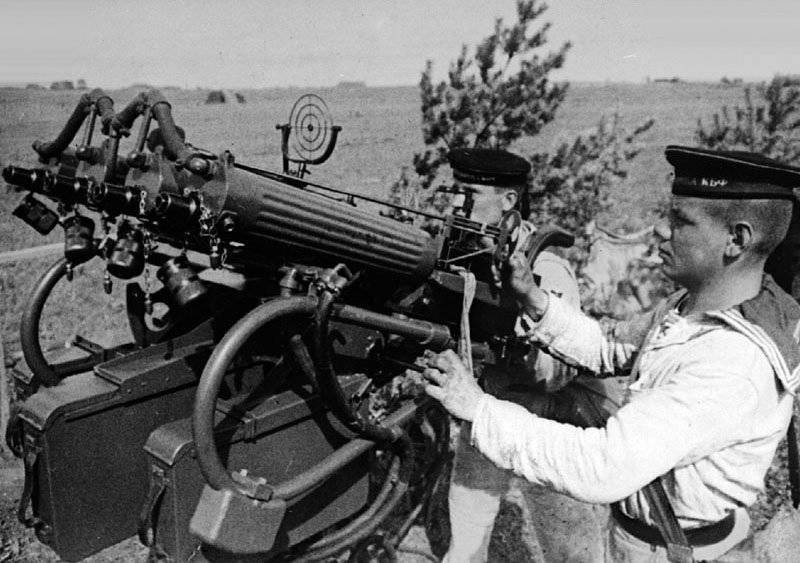 Calculation of seamen at the anti-aircraft machine gun

Shooting at long ranges still led, for example, at crossings or in the mountains, but even in these cases the range did not exceed 3000 meters. Reducing the range allowed, first, to reduce the range of used cartridges (cartridges with heavy bullets were excluded), and second, to raise the issue of creating a lightweight machine gun. However, the dimensions of the heavy machine gun, the time spent on changing positions and preparing for firing, did not allow these machine guns to be advanced to the forward lines, as they might be late with the reaction to the revived enemy firing points or his counterattack. In settlements, woods and mountains the bulkiness of machine guns was especially sensitive.

Their capabilities and power, heavy machine guns showed in defense. At the same time, the position was adapted for firing at various ranges and to the requirements of all-round defense. Machine-gun fire in the strongholds provided the flanks and the gaps, covered the positions of artillery and anti-tank crews, put them in forward positions and points, isolated separate duty and "dagger" machine guns. It was practiced to create areas of barrage and concentrated fire of heavy machine guns, which were superimposed on areas of artillery and mortar fire.

Further development received fire facilities for machine guns. For example, during the Battle of Stalingrad in the city 200 DZOTov was created, 37 armor and reinforced concrete caps for machine guns were installed. Greater attention was paid to firing in the dark, training in the calculation of reference points and lines, as well as methods of fixing the crosstalk with artificial dispersion in depth and along the front. The quick maneuvers of heavy machine guns, the importance of which is especially important during defense on a broad front, were difficult even after switching to a trench system with full profile trenches.

The transition to a new weapons system began in the middle of the war. The appearance of a lightweight machine gun became possible after an intermediate-power cartridge was created, but the production of the RPD was started only in the last months of World War II. But on the arms of the Red Army among the new models were accepted easel machine guns SG-43. The quick and successful implementation of the developmental reserve and combat experience accumulated before the war showed the creation of an effective system for designing, testing and putting into production.

The predilection of the Red Army commanders for the machine-gun wheeled machine is explained by the fact that such a machine allowed the machine gun to be moved ready for firing (most machine guns on tripod machine tools had to be removed from the machine tools and reinstalled in a new position) . The experience of military operations showed the advantages of a tripod machine with the ability to conduct anti-aircraft fire in front of universal and wheeled machines. 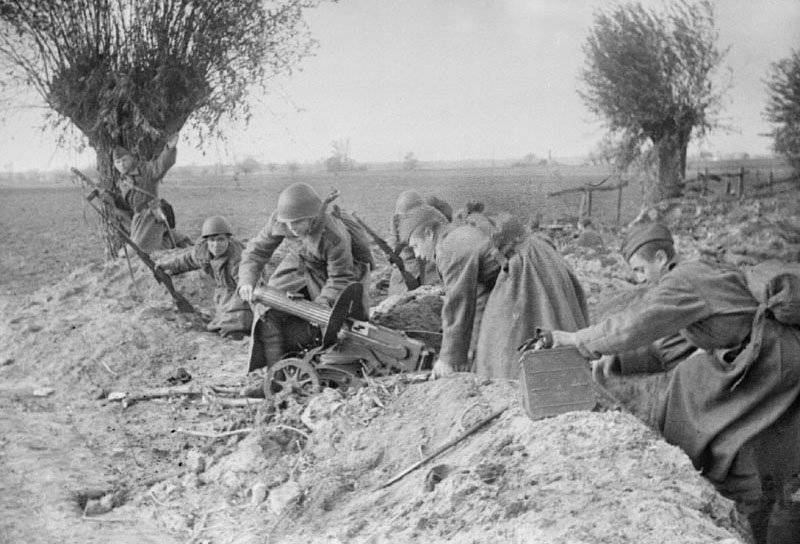 Despite the fact that large-caliber machine guns according to the “Manual on small business” were intended “for firing at air targets” as well as “for fighting enemy fire points and manpower with concealed light armor,” the main task for them was anti-aircraft weapons. As a rule, they fired at air targets at ranges of less than 1,5 thousand. The anti-aircraft guns were usually located no further than 300-500 meters from the front edge of the defense. With the help of these machine guns were covered with command posts, front-line roads and railways. For example, in May 1943 of the year 558 heavy machine guns were used to protect the rail lines of the fronts. During the war years, anti-aircraft machine guns (quad "Maxims" and DShK) shot down an enemy 2401 aircraft. Firing on low-flying, high-speed targets increased the requirements for combat rate of fire and the possibility of using them in complexed installations (it was embodied in the modernization of the AAC).

But the possibility of long-range shooting, the penetration of bullets (for fighting in the city or the mountains), the increase in the share of light armored vehicles were not ignored - for example, the DShK had to be used in anti-tank defense during the Kursk battle.

During the war revealed the need for more powerful machine guns. To solve this problem in the USSR returned to the machine guns under the 14,5-millimeter cartridge. In some countries, preferred to use automatic small-caliber guns. At the final stage of the war, the delivery of a large-caliber DShK machine gun to the troops did not decrease, in contrast to the easel and light machine guns. 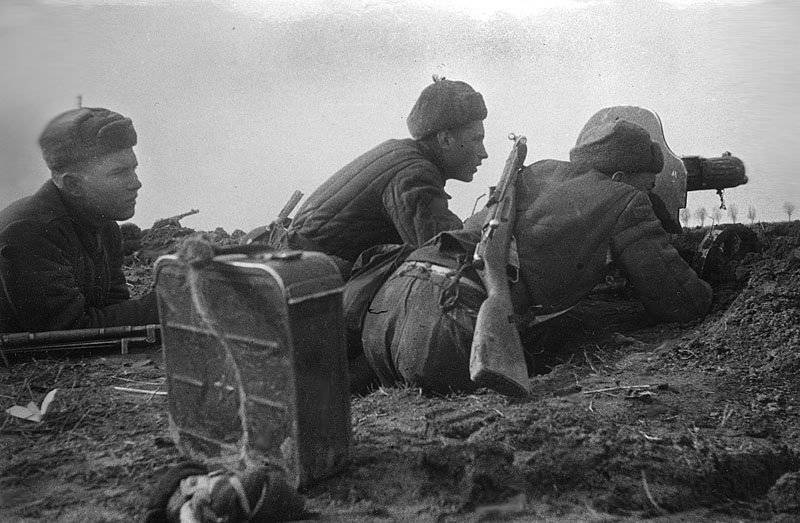 During the war, did not stop searching. For example, in 1942-1943, the need to facilitate light machine guns was the reason for the creation of BC Deykin, N.М. Afanasyev and V.F. Fierce on the Scientific Test Site of the small arms of the LAD machine gun with tape feed under the 7,62 mm pistol cartridge TT. The deterioration of shooting accuracy was one of the main reasons for the general desire to increase the density of fire. It is not surprising that there were installations of “heavy fire”, such as an experienced 8-barreled machine gun I.I. Slostina