14 May 2012
1
For the use of small explosive, fragmentation, incendiary and chemical aviation bombs weighing 1-25 kilograms in the Soviet Union developed various carriers - stationary cassettes, containers and RRAB (rotational dispersive bombs). It can be said that the RRAB were the predecessors of the aviation dropping cluster munitions. The ammunition was installed with the tail unit at 45 degrees to the main longitudinal axis. When dropped, the ammunition gained a rotational motion with an increasing frequency. When a given rotational speed was reached, the cables, having weakened sections that tighten the body, began to burst due to the action of centrifugal forces, and small combat ammunition began to scatter, hitting a large area when falling.
Produced RRAH in three versions:
- up to one thousand kilograms (RRAB-1);
- up to half a ton (RRAB-2);
- up to 250 kilograms (RRAB-3).
Structurally, RRAB is a shell with thin walls, in which small aerial bombs were laid, technicians, right on the airfield, just before use. All RRABs were of similar design:
- head;
- tail section;
- cylindrical part. 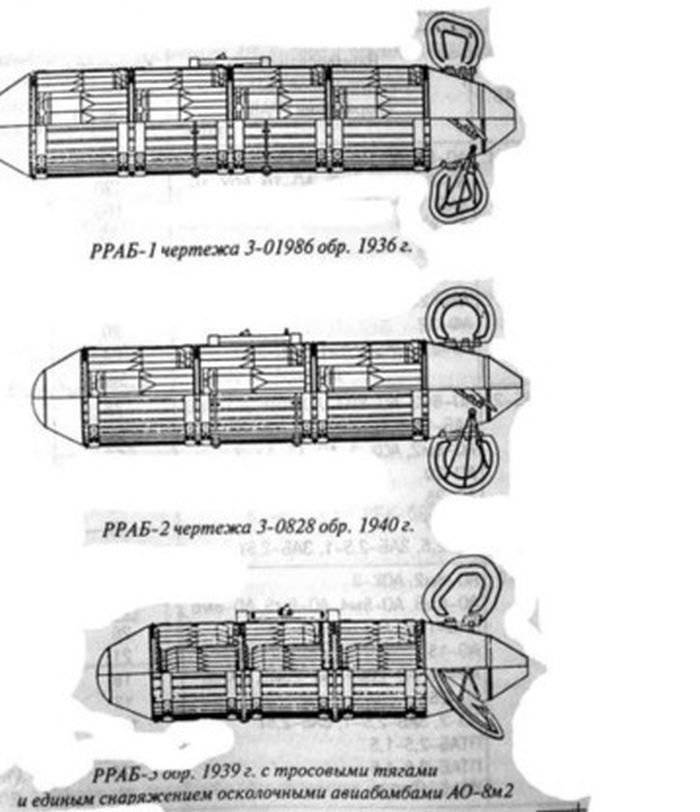 The head part (cone and head cap) of the fairing was stamped from steel sheets (thickness 1 mm), which were interconnected by electric welding. The cylindrical part - 4-e casement doors are made of corrugated steel (thickness 1.25 mm), which were curved along the arc of a circle corresponding to the diameter of the aerial bomb. In RRAB-3, the sash thickness was 1 mm. To increase the rigidity of the sash had 6 longitudinal zigov. RRAB-3 had 4 longitudinal ridges. The strength of the leaves was ensured by the steel rods rolled into the edges of the 5 mm flaps, and lithium steel gaskets were welded to the inner sides of the flaps. Tail portion - cone with a cone made of 1 mm sheet steel. The joints of the sheets were continuous seam electric welding. The cone of the tail section is provided with 4 flaps. They are installed by spacers and stops. RRAB-3 has three folding wings. The wings themselves are made of 1 mm steel. Additional rigidity of the wings provide ridges made on the wings in the form of various complex shapes. This gave the geometry of RRAB a touch of antique color.

Inside RRAB were divided into compartments separated by special discs made of plywood 10 mm thick. The length of the compartments was determined by the overall characteristics of the equipped small bombs, which were used for each RRAB individually. RRAB-1 / 2 could have inside up to 4-x compartments, RRAB-3 up to 3-x compartments. Before installing small bombs in the internal compartments of the RRAH they installed head fuses. Put small ammunition evenly, head on / against the direction of flight. Every three ammunition mounted in a row, the impellers of the fuses were turned in half a turn and tied together with wire forks.

Soviet light weight bombs did not have standardization in length, so often the compartments were not completely full. When filling the compartments with small ammunition, they were guided by documents that ordered in this case to leave the upper compartments of the tail section unfilled. Thus, RRAB felt more stable on the flight path. Prior to the beginning of the 40-s, RRAB was staffed with only one type of aerial bombs and one caliber. The end of the war with the Finns brought with it a revision of the composition of the RRAB complete set. It was possible to equip the RRAB with various ammunition, but only in each compartment there should have been small aerial bombs of one caliber. 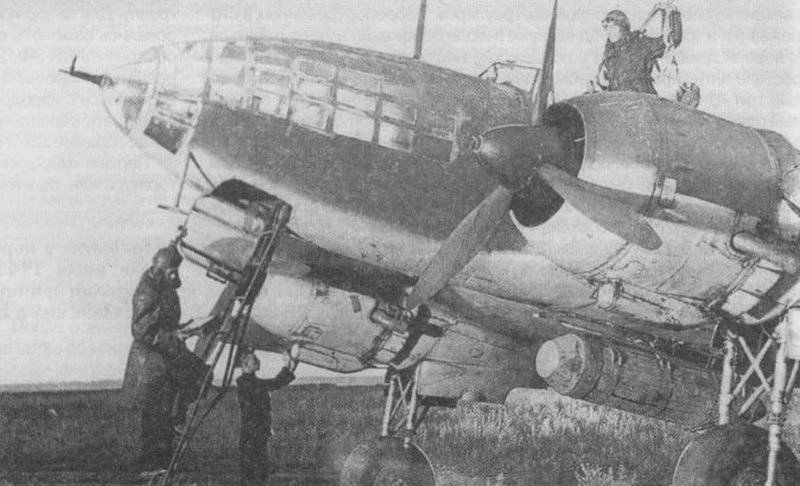 Each of the packaged compartments were 2-breaking rings. If the small ammunition was of a rather large caliber, the compartments were tightened with 4 rings of bursting type. The free space in the compartment when manning the ammunition was scored with wooden bombs. On the equipped RRAB case they put on the suspended manufacturing system, tail and head fairings, set the stabilizer wings to the folded position. When dumping RRAB from an aircraft, the pin holding the stabilizer with a cable was pulled out, the wings were opened by the flow of air into the fighting position, which was fixed by a special lock.

One of the main problems in the creation of RRAH was the reliability of the release of the bombs from the suspension system during the bombing. Traction made of cables, lock the bomb ratchet to break lock pins, opening these locks suspension, and freed RRAH from unnecessary element. The remaining steel cables, ribbons and suspension "dangling" under the plane. This had little effect on low-speed aircraft, but at high-speed carriers it threatened to lose or destroy the skin of the fuselage and wings. In 1940, RRAB-3 received an upgraded suspension system, which, after dropping RRAB-3, was automatically separated from the lock of the bomb rack. The cables of the locks of the suspension and the opening system of the plumage remained "unseparated". After about 10 seconds of free flight, combat equipment, testing large centrifugal forces, broke the rings and flew apart, covering the selected target with a large area. Depending on the RRAH combat equipment, they could be used to destroy enemy personnel:
- in the open area;
- in field shelters;
- on cars;
- in armored vehicles.
RRAB with incendiary ammunition used to ignite buildings, warehouses, wooden type. Depending on staffing and height, the area hit was:
- height 3 km RRAB-1 - 230-950 square meters, RRAB-2 - 280-1300 square meters, RRAB-3 - 220 - 850 square meters;
- height up to 5 km RRAB-1 - up to 1200 square meters; RRAB-2 - up to 1700 square meters, RRAB-3 - up to 1100 square meters; 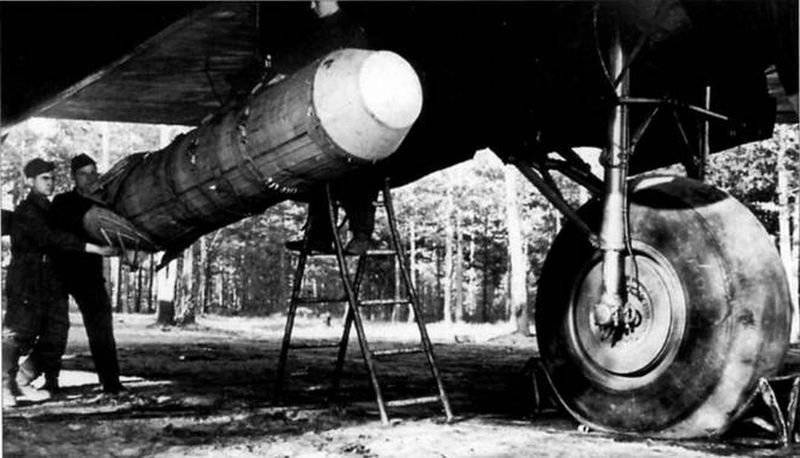 According to the RRAB project, TB-3-4М-17 and TB-1 bombers were armed. But the increased popularity of these ammunition and the adoption of a number of aircraft, allow the use of RRABs on other aircraft:
- RRAB-1 / 2 - heavy bombers TB-3РН and TB-3, long-range bombers Il-4 and DB-3;
- RRAB-3 - long-range IL-4 and SB (MN) bombers.
Rotational-scattering aerial bombs received “combat” baptism in the Finnish War of the year 1939-40. The main disadvantage began to be considered as the staffing of the RRAH at the aerodromes with technicians who were engaged in the preparation and repair of aircraft during the war. This adversely affected the use of BRAH in the period 2MB, where their use was carried out with much lower intensity.

Equipment RRAB required a lot of time. Each small bomb had to be prepared and placed in a cassette, like oranges or lemons in a box, and not one hundred of them were placed. In case of cancellation of a cassette, it was necessary to discharge the same amount of time. Acute language our guys deciphered RRAH in their own way - work, work, but to no avail ... Although, in fact, she acted quite effectively. ".
- Rakov, Vasily Ivanovich. Wings over the sea

The commission, which considered fighting in the course of the Finnish war, indicated that more successful preparation is required for the successful use of the RRAB, because the incorrect assembly of the RRAB led to incorrect disclosure and operation. Small ammunition did not have time to acquire the correct position and cock fuses. The commission also established the cause of the huge losses of the spacecraft during the Finnish war. As it turned out, the loss of vehicles was conducted not only in air connections, but also ground troops. Therefore, many of the infantry commanders took for the downed part of the RRAH with their stabilizers, as part of the tail of the downed / fallen / burned down aircraft.

The Finns called RRAB-3 "Molotov's bread baskets" (Fin. Molotovin leipäkori), and smaller aerial bombs - "Molotov breadbaskets". According to one version, this was due to the fact that the Soviet people's Commissar Molotov denied reports of the bombing of Helsinki, stating that bags of bread were thrown from airplanes for the starving Finnish workers. According to another version, this name could be an allusion to the Molotov cocktail.

By the beginning of the 40s, the RRAB-1 was discontinued, the Soviet enterprises produced only the RRAB-2 / 3 kits. As it became known, the Germans are seriously interested in such decisions. After the end of the Finnish War, German intelligence officers inspected almost all parts / parts of the dumped Soviet RRABs and the most interesting of them were taken to Germany.