11 May 2012
93
In early May, Astana hosted an exhibition of military-technical equipment KADEX-2012. Among other new products, the KAMAZ plant attracted special attention of the public. According to the established tradition, the Kamsky Automobile Plant presented both civil and military equipment. And the most attention of the public was attracted by the car, which represents the second category. The fact is that at the KADEX-2012 salon, the general public for the first time was able to see with their own eyes the new development of KAMAZ, about which there were so many conversations - KAMAZ-63968 “Typhoon”. 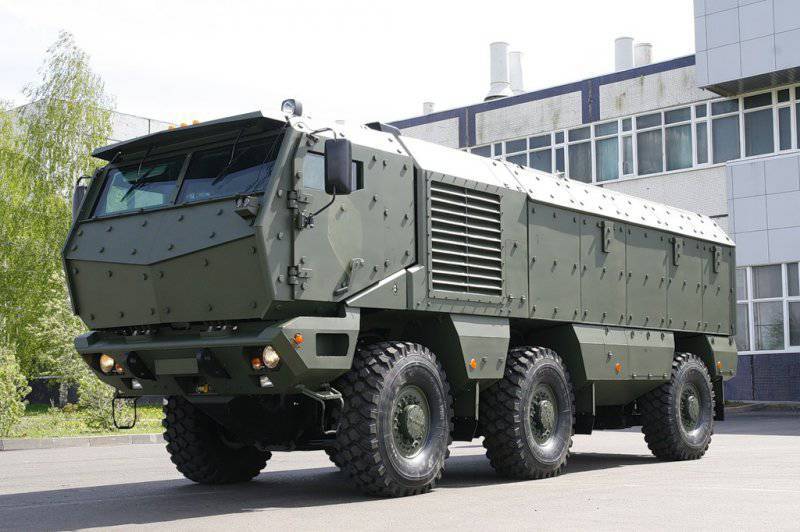 History This project dates back to the 2009 year. Then the Military Scientific Committee of the General Staff of the Russian Armed Forces issued a document titled "The concept of the development of military motor vehicles of the Armed Forces of the Russian Federation for the period up to 2020 year." According to this concept, the further development of cars for the army was to go on a modular scheme. The implication was that in the very near future, several promising wheeled platforms would be created on which any target equipment could be mounted. At the very beginning of the next 2010, the Minister of Defense, A. Serdyukov, approved the “Concept” and the “Typhoon” program was soon launched. During the program, it was required to create a new generation of trucks for the armed forces with anti-bullet and mine protection for the crew, cargo, as well as the main components and assemblies. The Ural and KAMAZ automobile plants were selected as participants of the program.

In fact, the Typhoon program is a further development of the Garage program, which, according to some reports, was launched almost at the end of the eighties. The goal of the Garage was to create a unified cargo wheeled platform that could be launched into production at the Urals and at KAMAZ at the same time. Obviously, the nineties of the last century was far from the best time to create such projects, so the Garage sunk into oblivion, leaving almost no public information about itself. Nevertheless, the army demanded a truck, and the “by-products” of the “Garage” theme, the Mustang and Motocars of KAMAZ and Ural, respectively, proved useful. Ordering the machines of these families helped to close the issue of a promising army truck for a while. But only for a while, because the main task of the Garage program - the unification of automobiles produced by two plants - was never achieved. 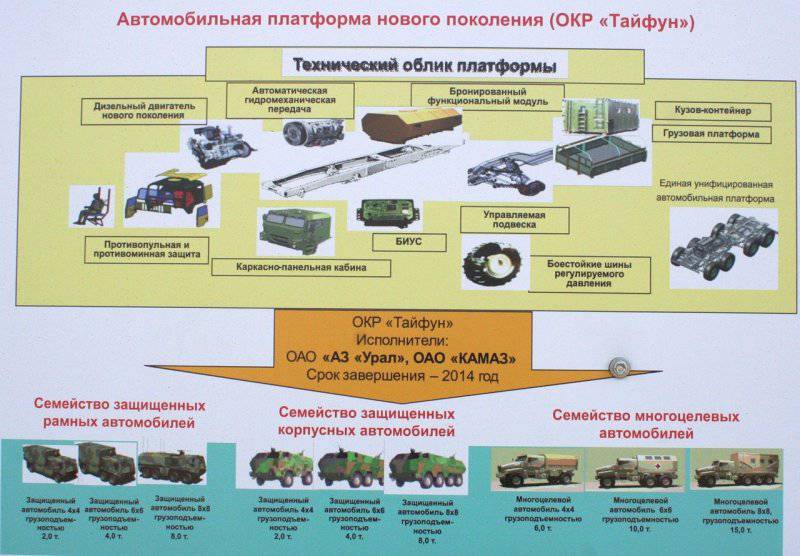 According to the original terms of reference for the Typhoon program, the projects of the participating automotive plants should have been based on the same engine (YMZ-536), the same transmission, a single on-board information management system (BIUS), anti-bullet and mine protection not lower than third grade STANAG 4569 standard. But the main requirement concerned the possibility of creating on the basis of a single chassis a whole family of vehicles for various purposes. First of all, on the basis of the armored "Typhoon" it was necessary to create two versions of trucks: with an armored cabin for the transport of personnel and with an open platform for cargo. It was also necessary to provide for the possibility of assembling and operating "Typhoon" without armored parts. In this case, they could become the basis for those types of equipment that, during their work, almost no risk of being blown up or fired - radar, carriers of unmanned aerial vehicles, etc.

When developing requirements for the protection of new cars, the Russian military took into account the foreign experience of operating vehicles in recent military conflicts. Thus, the peculiarities of waging war in Yugoslavia, Afghanistan and Iraq clearly showed the need to strengthen the protection of vehicles of troops. Moreover, it is necessary not only to strengthen the booking of aircraft’s sides, but also to protect their bottom in order to avoid the serious consequences of the explosion of improvised explosive devices, which are widespread in conflicts involving irregular armed formations. For these purposes, armored cars began to equip the bottom of the V-shaped: inclined armor plates redirect a significant part of the explosion energy and fragments to the sides, which significantly reduces the impact of mines on the internal units of the vehicle and crew. Over time, cars with such a bottom were even allocated to a separate class called MRAP (Mine Resistant Ambush Protected — protected from mines and ambushes). Domestic experience of conflicts in the North Caucasus only confirmed the expediency of foreign proposals. Therefore, the topic "Typhoon" can be considered a full response to foreign MRAP. 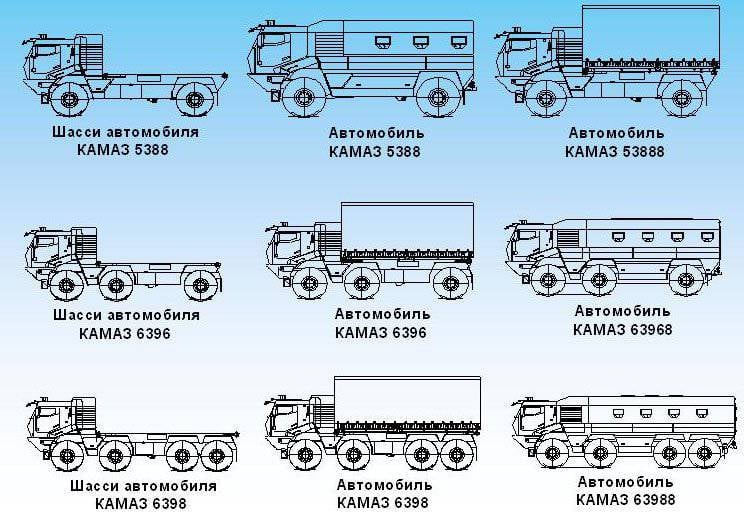 In 2010, the active phase of the Typhoon program began. As already mentioned, the Ural and KAMAZ plants were involved as lead developers of competitive machines, and several enterprises and scientific institutions were invited to the program. In particular, MSTU. Bauman was engaged in the development of a hydropneumatic suspension, and the Sarovsky nuclear center was charged with calculating the protection of the armored hull. About these moments of the design is worth to tell more. Hydropneumatic independent suspension system allows you to change its parameters literally on the go. To do this, the driver has a special remote control, from which it is possible, for example, to change the ground clearance within 400 mm. In addition, the pneumatic system provides automatic tire inflation depending on the pressure from one to 4,5 atmospheres chosen by the driver. The “Typhoon” reservation was made at the Scientific and Research Institute of Steel and is based on special ceramics. According to representatives of the institute, ceramic armor with equal characteristics weighs significantly less than steel. Work to ensure the protection of the car from mines in our country for the first time, and we still do not have the corresponding standard for classifying explosions under the bottom. Therefore, the Research Institute of Steel and the plants participating in the program were forced to use the NATO classification provided by the STANAG 4569 standard. As a result of this “borrowing”, prototypes of booking for promising cars meet the level of protection 3b - 8 kilogram of TNT under any part of the bottom. Naturally, the truck in this case will receive very, very serious damage, but the crew will remain alive. With regard to the requirements for protection from bullets, the cabin and the armored module for the transport of personnel on 16 people from all angles withstand hit 14,5-mm armor-piercing bullet machine gun KPV from a distance of at least 200 meters, which corresponds to 4 level STANAG 4569.

Being “assembled” by the engineers and workers of KAMAZ, all these innovations and elements are as follows. The “Typhoon” with the KAMAZ-63968 index, presented at KADEX-2012, is a bonnetless truck with the wheel formula 6х6, which is classic for the Kama Automobile Plant. The six-cylinder YMZ-5367 diesel horsepower 450 transmits the force to a six-speed gearbox and a two-stage “razdatku”, which, in turn, ensure the work of planetary gearboxes on all axles. All differentials have automatic locking, and braking is performed using disc brakes that interact with the anti-skid and anti-lock systems. All KAMAZ-63968 wheels have special tires with anti-explosion inserts. 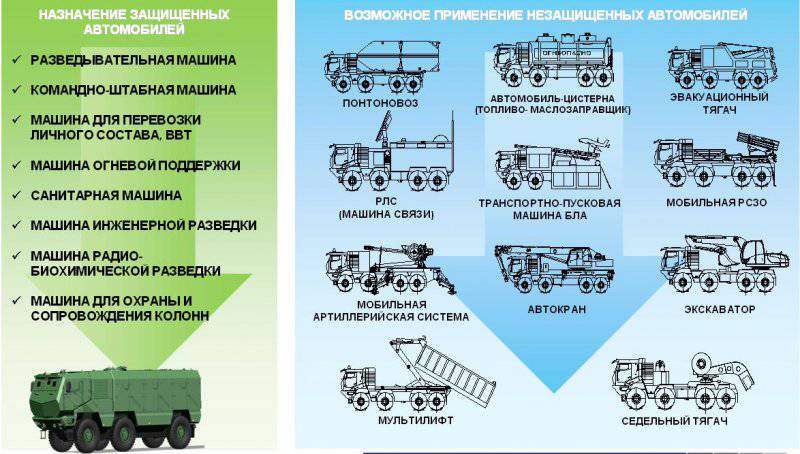 A large number of parameters that need to be constantly regulated required the introduction of a specialized onboard information management system into the composition of the Typhoon equipment. Her responsibilities include monitoring the status of systems and the presence of problems, calculating the necessary clearance, suspension mode, etc. For this, the CICS takes the parameters from a variety of sensors and, taking into account the speed, roll, inclination of the road, etc., issues the appropriate commands to the truck systems. In addition, in the future, KAMAZ-63968 may be equipped with satellite navigation and communication systems of any available type.

The layout of the Typhoon modular vehicle developed by the KAMAZ plant was presented to the country's leadership at the end of October 2010. At about the same time, active work began on “adapting” the existing project to other program requirements, namely the creation of wheeled platforms with the formulas 4 x4 and 8 x8 with a load capacity of 2 and 8 tons, respectively. As for the chassis 6х6, it should have a carrying capacity of about four tons. As a result, before the end of work on the Typhoon program, KAMAZ must create a whole family of trucks. It is interesting that due to the unification requirements, the high load on the front axle and the peculiarities of the multi-axle structures, all KAMAZ “Typhoon” variants have two rotary axes. At the same time, last year information appeared about a possible rejection of the development of a two-axle truck variant. The reasons were all the same facts that served as the basis for equipping the “Tayfunov” with two controlled axes. However, this option managed to get the factory index. At the moment, the list of “Typhoon” variants created by KAMAZ looks like this:
- KAMAZ-5388. Chassis with wheel formula 4х4. Designed for installation of the onboard body, cranes, multi lifts and other equipment that does not require protection;
- KAMAZ-53888. The same "5388", but with armor installed;
- KAMAZ-6396. Three-axle chassis, not intended for mounting armor;
- KAMAZ-63968. Armored version of the previous modification;
- KAMAZ-6398. Further development of KAMAZ-6396, but with four axes;
- KAMAZ-63988. Armored version of "6398".

It is argued that the unification of machines of various modifications reaches 86%, which in the future will improve the economic side of the production of machines. At present, the KAMAZ Typhoon prototypes are being tested and refined. Soon, comparative tests will be launched, during which the Kama Typhoon will compete with a competitor of the Ural plant. According to their results, the Ministry of Defense will select the most suitable vehicle that will be launched in the series.