14 2018 June
20
Last time we stopped at a relatively “ancient” Norwegian rifle, after first describing the later samples of the Swedish army’s rifles ... So, we can say that because of the “fluctuations of the information field”, our “time machine” throws it there, then here. And then there was Maxim’s machine guns, which, incidentally, was also engaged in rifles ... But in this case, what’s important is that, around the year 1890, several famous gunsmiths like Hiram Maxim, John Moses Browning and von Mannlicher decided that there comes a time for so-called automatic rifles. And an automatic rifle is primarily a self-loading rifle. In appearance, and the overall design, size and weight, it looks like an ordinary rifle with manual loading. But it only shoots much more often than usual! However, the military around the world at that time were not interested in self-loading rifles. They were pleased with the five-shot magazine rifles, which were durable and reliable. They wanted the soldiers to save ammunition, and not to burn in white light, like a lot of money!

Nevertheless, automatic rifles began to be developed, and during the First World War, attempts were made to arm them with infantry in France and Russia.

In Sweden, interest in a semi-automatic rifle awoke only in 1938. Initially, several designers led by Eric Walberg tried to convert conventional rifles into semi-automatic ones. But it turned out that nothing will come of it. An interesting project came from the Finnish captain Pelo. He offered a rifle with recoil barrel in its short course. This system is very reliable, but heavy due to the design features.

But Ag m / 42, designed by Eric Eklund from AB CJ Ljungmans Verkstäder in Malmö around 1941 of the year and accepted into mass production at Carl Gustafs Stads Gevärsfaktori in Eskilstuna in 1942, turned out to be weaponsthat ... the Swedish military liked. And for the Swedish army they were made about 30 000 units. In general, a bit, while the Swedish rifle’s standard rifle remained a 6,5-mm m / 96 Mauser.

An early type of ribbing on the cover of an Ag m / 42 rifle receiver.

The Norwegian “police forces” who studied in Sweden during World War II also received Ag m / 42s and brought them to Norway after the German occupation units surrendered to the Allies in 1945. These rifles until a later version Ag m / 42B (and later appeared such) were not modified.

This work was carried out in the period from 1953 to 1956 year, and the recycled rifles were designated Ag m / 42B. This sample received a stainless steel gas tube, two characteristic handles on the receiver's lid, new stores and a new ramrod. The Ag m / 42B rifle in the middle of the 1960s, in turn, was replaced by AK4 (a G3 rifle received from Heckler & Koch).

At the beginning of the 1950-s, a license for the production of Ag m / 42B was sold to Egypt, as a result of which the Hakim rifle was released, which used the 7,92 × 57 mm Mauser cartridge. Sweden also sold factory equipment to Egypt, so Hakim was manufactured on the same machines as the Swedish rifle. In the end, “Hakim” was converted into a carbine under the Soviet cartridge 7,62 × 39 mm, which was called “Rashid”. 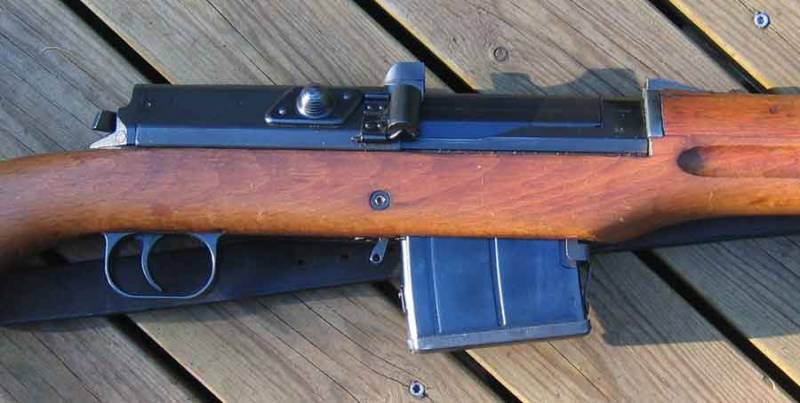 Such amusing “horns” appeared on the Ag m / 42В modification. 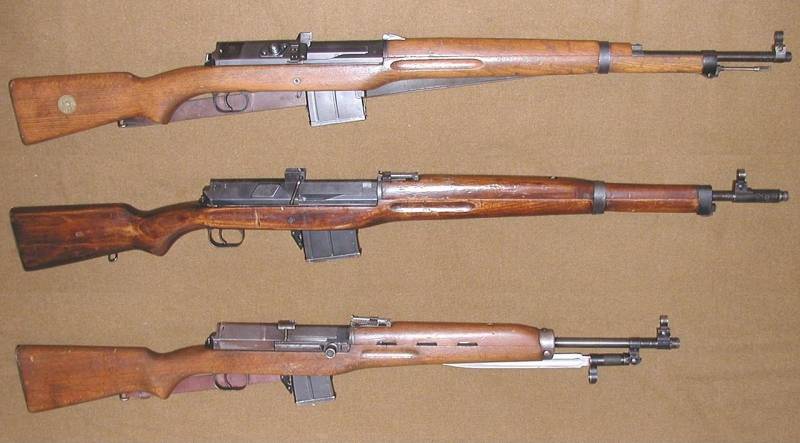 From top to bottom: Ag m / 42В, “Hakim” and “Rashid”, on which a completely normal shutter handle has already appeared.

Well, now consider this rifle a little more. Very original and interesting sample. To begin with, the Swedish army weapon always had a certain originality, primarily relating, as noted in one of the preceding materials, to shooting accuracy. Actually, they somehow did not want to create their own weapons, so the Swedish army was armed with Mauser rifles and Nagant's revolvers. Mauser rifles and Nagan's revolvers were taken into service ... Much, even in what they already did, they borrowed. For example, in the Ag m / 42 rifle they used a number of ideas from our SVT-38, which interested them in the most obvious way. But at the same time, the Swedes did not plan to re-equip their army with fully automatic rifles: the main weapons of the infantry were still Mauser rifles. The bayonet on Ag m / 42, by the way, was used from the same “Swedish Mauser”. 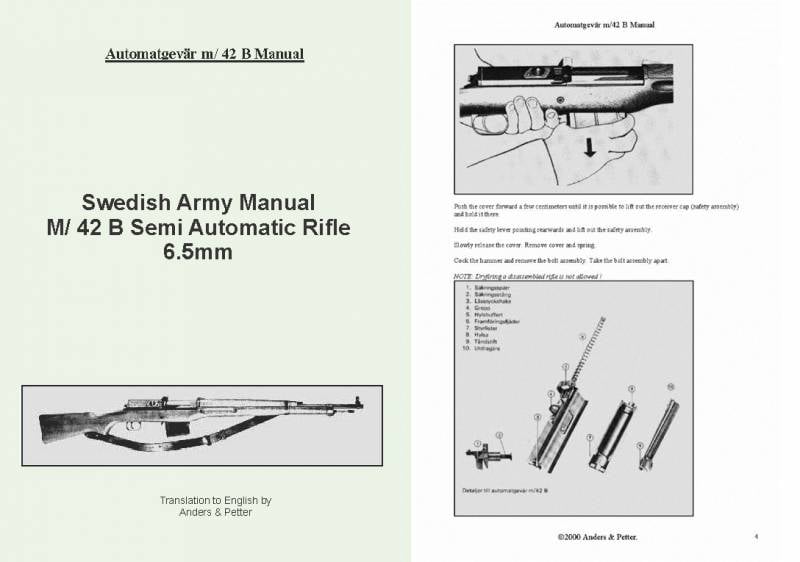 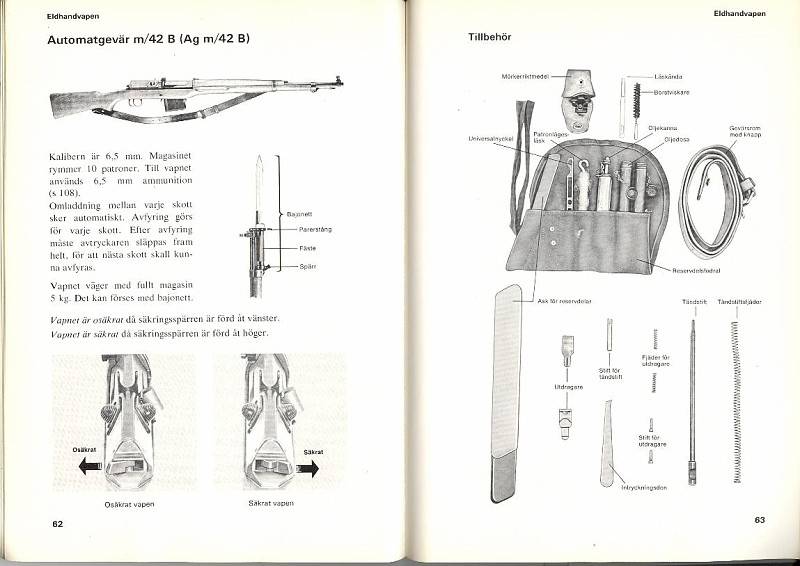 And here about how to use the fuse, fasten the bayonet and all the necessary accessories.

As for the originality and differences of Ag m / 42 from the CBT, in Lyngman (this is also called the rifle by the name of the company where its creator worked), the first of these is: the rifle does not have a gas piston. As in М16, and МАС49, powder gases are simply discharged from the barrel through the tube to the front part of the bolt, and they press on it, throwing it back. As it turned out later, this only worsened the accuracy of the rifle fight, which began to fall as the barrel heated up when fired. The lack of a gas regulator has led to the fact that the rifle has become sensitive to the quality of the cartridges.

Interestingly, in the detachable magazine to the Ag m / 42В rifle, they put not one, but just two locks of the magazine, both in the front and in the back. Working with them is not very convenient. Therefore, it is easier to charge the rifle from the holder, alternately inserting them one by one on top. Why Eklund did just that is hard to say. In addition, the rifle comes with just one magazine. So it is better not to lose it under any circumstances. Although ... well, what the Swedes were greedy? Well done at least ... two! 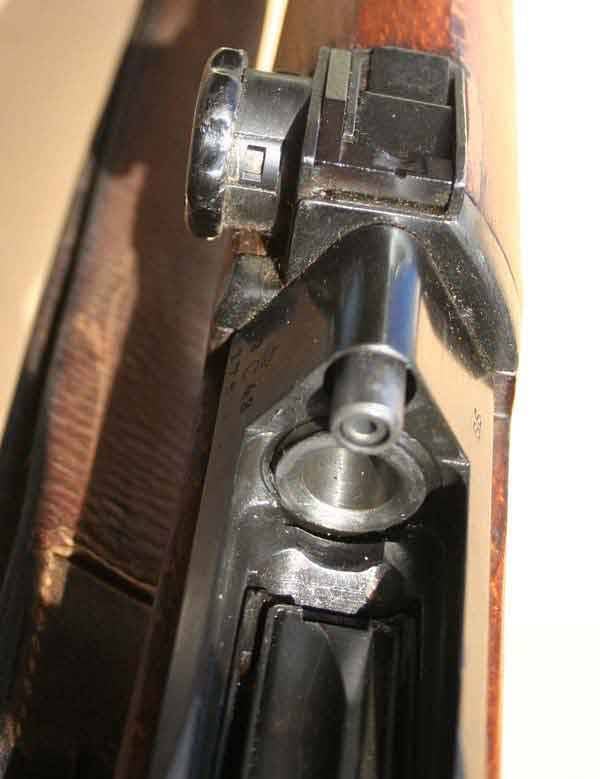 Above the opening of the chamber is clearly visible pipe from which the powder gases flow.

Since the cartridge for the flangeless rifle, in this respect it is more convenient than our ABC-36 and CBT. But it is very difficult to put it into action. Rather, not difficult, but you need to know how to do it. Intuitively charge and shoot Ag m / 42V will not work! 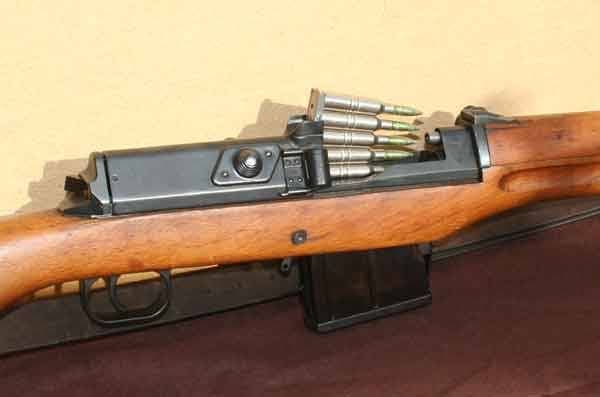 That's how the rifle is charged from the holder. Cartridges without welts, this, of course, is very convenient in all respects.

The fact is that in order to charge it, you need to take the conical protrusions on the cover of the receiver and push it forward until it stops, although usually it is customary to move all the moving parts in the weapon during the loading process! Cover the receiver at the same time engages with the bolt carrier. Now the bolt band, that is, the frame with the lid, should be fed back. Now you can fill the magazine with cartridges from the clips, or insert the already filled one at the bottom and move the bolt group back and forth a little. As a result, the cover with the slide frame will be disengaged, and the return spring will send it forward. The cartridge is sent, the barrel bore is locked by tilting the back of the bolt down, and the lid remains behind. Only now the rifle can be considered ready to fire. 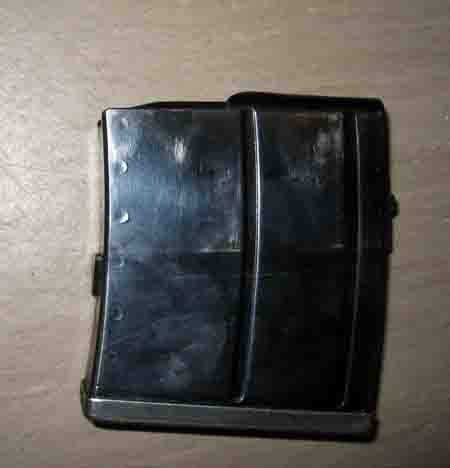 Such a clearly sophisticated design requires considerable practice and is supposedly intended to prevent its use if it is in the hands of the enemy. Of course, it can be said that the weapons of the opposite side are usually studied in advance, but in this case it is clearly not enough to “study” such a non-trivial mechanism. There will need to be constant training, so as not to forget in battle, that where and in what sequence to move! 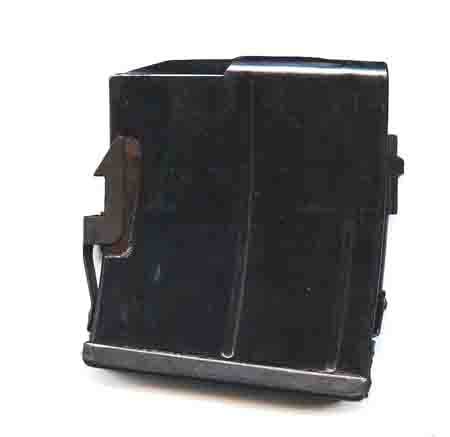 Many shooters say that the gas stream from the gas tube gets into the face when firing, and this is somewhat annoying. It is very distracting when aiming and unusual, sticking to the side "horns" on the cover of the receiver of this rifle. 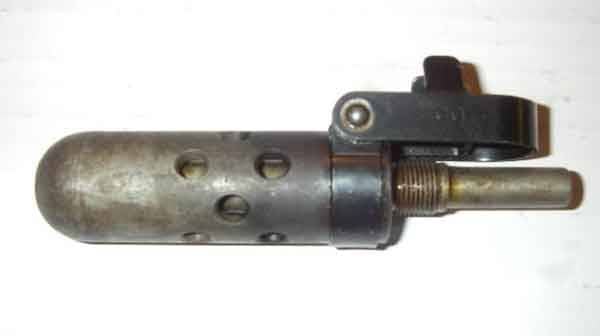 Device for shooting blank cartridges, screwed on the barrel.

True, the recoil when shooting is small, as well as tossing the muzzle of the barrel, since the rifle's mass is significant and its balance is good. The sight, calibrated from 100 to 700 m, is convenient with 100 m pitch. So, in general, you can shoot from this rifle and hit the target, but you need to adapt to it well, otherwise you can get hurt with it ...

Ctrl Enter
Noticed oshЫbku Highlight text and press. Ctrl + Enter
We are
Rifles by countries and continents. Part of 16. "And then push the cartridge with your finger ..."Rifles by countries and continents. Rifles heirs of the Vikings. Continued (part of 15)
20 comments
Information
Dear reader, to leave comments on the publication, you must to register.