Terminator from the Red Army 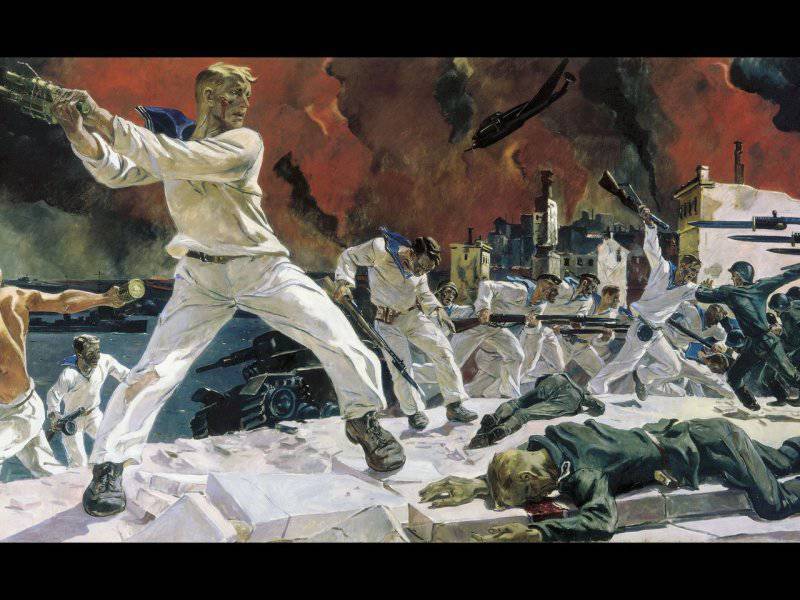 The holiday was over, but we always remember our heroes. A monstrous event took place 13 July 1941 of the year in the vicinity of the town Pesets (and the number 13, and the name of the settlement - it all matched!), Further excerpt from the award order: 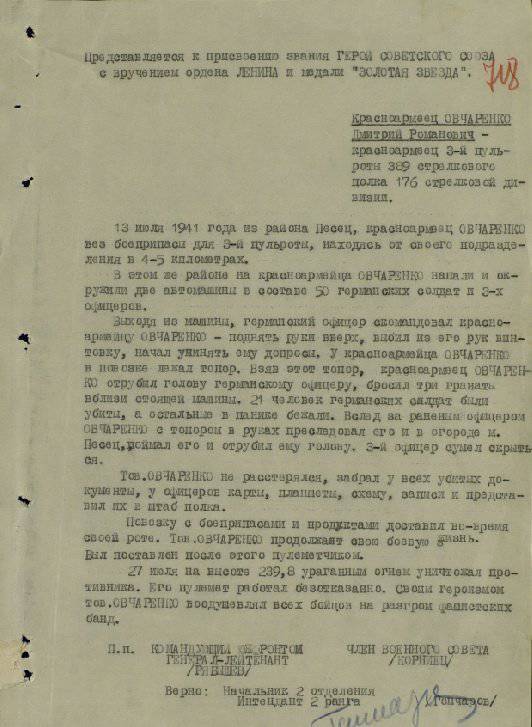 “July 13 1941, from the region of Arctic Fox, a Red Army soldier Ovcharenko, was carrying ammunition for the 3 pulroty, being from his unit in 4-5 kilometers. In the same area, a Red Army soldier was attacked and surrounded by two vehicles of German soldiers and 50 officers as part of 3. Coming out of the car, a German officer commanded the Red Armyman to raise his hands up, knocked out a rifle from his hands and began to interrogate him.

A Red Army soldier Ovcharenko in his cart lay an ax. Having taken this ax, the Red Army man chopped off the head of a German officer, threw three grenades near a standing vehicle. 21 German soldier was killed, the rest fled in panic. Following the wounded officer, Ovcharenko, with an ax in his hand, pursued him and in the garden, Fox. Caught him and cut off his head. The 3 officer managed to escape.

Tov. Ovcharenko did not lose his head, took all the documents from the dead, officers, maps, tablets, maps, records, and provided them to the regimental headquarters. A cart with ammunition and food delivered on time to his company ... "

How could this happen

Despite its seeming improbability and the strange name of the locality, it is most likely a real история: Aryans-Yubermenshi lost vigilance and really got what they deserved. Fifty Nazis - a clear exaggeration, the capacity of the "Hanomag" 10 ... 12 freaks, along with the crew. If the truck, then more, the 15 man in one ... In reality, it was the 20-30 cranks with the letter M. See - a cart with one subhuman is riding. They stopped, the ain official went to interrogate the Russian Mongolian, or, most likely, simply decided to make fun (what did he want to learn from him? How to get to the library?), The others got out who needed to drink, who had to clear his head. And, along the way, they brightened the moment of Dostoevshchina, when they were planted with a too-talkative officer with a tomahawk between the eyes. It is clear that Ovcharenko did not demolish the head of the officer, do not go samurai, most likely, just cut down Raskolnikov's grandmother.

The ax is not a rifle, the shot is not audible, and if Ovcharenko also successfully planted, the fascist did not have time to gasp. Fussing around the cart comrades killed could be regarded as issuing a portion of the slap on the sluggish Red Army. And maybe they didn’t look at them in general, because they didn’t meet the cavalry division, but Sancho Panza, one dented and dead tired. If someone watched, 100% was taken aback by what he saw, then the film “Rambo” didn’t take off and such 3D effects were new: “What kind of chaos !? Didn’t say a word, immediately with an ax in the board”.

Our fighter, having eliminated the noise on the right, grabs three grenades from a wagon and hurls it in the direction of a German picnic on the sidelines. Imagine, you are sitting on a July afternoon in the company of normal boys from the correct area, your buddy is gone nerd pucker and then a grenade falls in front of you. It is not known what happened at this moment in the heads of the bewildered Nazis, we can only assume:
a) Donnerveter! ("Damn it!!!")
b) Aah, an ambush, there are a lot of them!
c) However, in this barbarous country, lemons look strange ....

Whatever they thought there, it exploded terribly. The Germans, who so, in parts fell on the ground. Surely, not one of the fascists could have imagined that some kind of a “beaten child of the East” (the definition of Slavic brothers according to Goebbels) would take offense at the simple question: “Is there Cho? And if I find it?”

The final is logical: one of the Fritz was killed, who ran away. In addition to one officer who didn’t have enough impressions, he decided to check if he could run fast with a half-torn ass. Our hero caught up with the German Paralympic and made him like Papa Carlo Buratina. I did everything right - why run around the gardens of the village Arctic fox, because you didn’t plant swede, you don’t trample it.

Then the laws of drama come into play: only one is left alive. After the bloody bath, the Red Army soldier Ovcharenko collected the scoring trophies and drove on with his business, which he had quite a few, unlike the German dolts who darted with unclear goals in places where they were not welcome.

Nails would make of these people ... would not be stronger in the world of nails 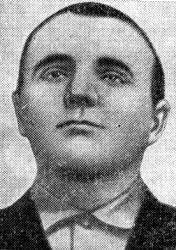 Ovcharenko Dmitry Romanovich - rifle machine-gun company of the 389 th rifle regiment of the 176 th rifle division of the 9 th army of the Southern Front, a Red Army man.

Born in 1919, in the village of Ovcharovo, now Trinity District, Lugansk region of Ukraine in a peasant family. Ukrainian. Graduated 5 classes. He worked on the farm.

13 July 1941, while delivering ammunition to a company, a fearless warrior engaged in battle with a group of nazis. Having shown courage and resourcefulness, he destroyed over twenty enemy soldiers and officers in grenades and in hand-to-hand fighting. Ammunition was delivered to the company in a timely manner.

By decree of the Presidium of the Supreme Soviet of the USSR from 9 November 1941, for exemplary performance of combat tasks of the command on the front of the fight against the German fascist aggressors and the courage and heroism shown to Red Army Ovcharenko Dmitry Romanovich awarded the title of Hero of the Soviet Union with the award of the Order of Lenin and the Gold Star medal .

It was not possible for the courageous fighter to live until the bright Victory Day ... In the battles for the liberation of Hungary, DR. Ovcharenko was mortally wounded. He died in hospital from wounds 28 January 1945 of the year.

Everlasting memory! Forgive us, Dmitry Romanovich, for the fact that we are not so ....