The twentieth century was a breakthrough in many areas of technological progress, in particular in increasing the speed of vehicles. For ground vehicles, these speeds increased significantly, for airborne speeds - by orders of magnitude. But on the sea, humanity rested in a dead end.

The main qualitative leap occurred in the nineteenth century, when steam sails appeared instead of sailing ships. But it soon became clear that the main speed limiter for ships was not the weakness of the power plant, but water resistance. As a result, the speed record set by the Russian destroyer Novik 21 August 1913 of the year (37,3 node) became in fact the ultimate dream for large displacement ships (recall that the node is one nautical mile, that is, 1852 m / h).

This record was broken, of course. Before the Second World War, Italian and French leaders and destroyers rushed around the Mediterranean Sea, sometimes reaching as far as 45 nodes. It is not clear, however, why they needed this speed, since it was the Italian and French fleets that fought the worst in World War II. He broke Novik's record, winning the Blue Ribbon of the Atlantic at the start of the 1950's, the American United States (38,5 hub). But even these speeds were reached by the number of ships read and at very short distances. In general, for warships, the maximum speed rarely exceeds the 32 node even today, and the cruising speed (at which the maximum cruising range is reached) has always been lower than the 30 nodes. For transport ships and 25 nodes was a unique achievement, most of them are still being dragged across the seas at speeds not exceeding 20 nodes, that is, less than 40 km / h.

The appearance of diesel, gas turbine, and even nuclear engines at best gave an increase in speed of several knots (another thing is that diesels and nuclear power plants made it possible to dramatically increase the cruising range). Wave resistance rose wall. The most important means of dealing with it was to increase the ratio of the length of the ship's hull to its width. Too narrow a ship, however, had poor stability, it could easily roll over in a storm. In addition, it was difficult to shove a variety of systems and mechanisms into a narrow case. Therefore, only some destroyers due to the narrowness of the hulls set their speed records, this did not become a trend even for warships, and for cargo ships the narrowing of the hulls was unacceptable in principle.

Aviation almost completely replaced sea vessels in terms of passenger traffic, but with regard to freight traffic, almost all of them still account for water and rail transport. Aircraft carrying capacity remains almost the same critical issue as ship speed. Therefore, engineers continue to struggle to solve both problems.

For commercial shipping, the problem of low speeds is largely leveled by a large number of vessels on the lines. If tankers (container ships, banana trucks, timber trucks, etc.) leave point A daily, then they will come to point B daily, regardless of the speed of each individual vessel. The main thing is to have enough ships to maintain such a schedule.

For the Navy, speed is, of course, much more important. And for warships (explanations here, perhaps, are superfluous), and for transport and landing ships carrying troops. Moreover, the latter now, when the wars have acquired a global scale, has become more important than the first (especially since for warships the presence of rocket weapons: the rocket will catch up with anyone).

Since the unsolvability of the problem of wave resistance became clear long ago, along with the pursuit of units of nodes by improving the hull lines and the shape of the screws, strengthening power plants on ordinary ships, the search began for something unusual.

At the end of the 19th century, the effect of lift was discovered on a plate towed under water at a slight angle of inclination to the horizon. This effect is similar to the aerodynamic effect on the wing of the aircraft and allowing it to fly. Since water is about 800 times denser than air, the area of ​​the hydrofoil could be as much less than that of an airplane. If you put a ship on the wings, then at a sufficiently high speed the lift will lift it above the water, only wings will remain under it. This will significantly reduce the resistance of water and, consequently, increase the speed of movement.

The first experiments with hydrofoil vessels were carried out in France and Italy, but they reached their greatest development in the USSR. The chief designer of such ships was Rostislav Alekseev, who headed the corresponding Central Design Bureau (it was located in Gorky). A number of passenger ships and hydrofoil fighting boats were created. However, it quickly became clear that the displacement of hydrofoil vessels is very limited. The higher it is, the larger the size and weight the underwater wing should reach and the more powerful the power plant should be. Because of this, even a hydrofoil frigate is almost impossible to create. 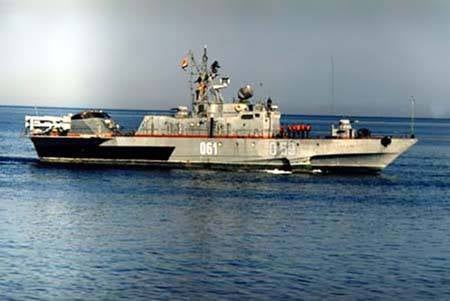 As a result, the matter did not go further than “suburban transport” - “Rocket”, “Komet” and “Meteorov” - and a certain number of hydrofoil fighting boats. For the Navy of the USSR and the Border Guards, 2 anti-submarine ships were built on hydrofoils, pr. 1145 and 1, pr. 1141, 1, small rocket ship (MRK), pr. 1240, 16, patrol boats, pr. 133, 18, missile boats, pr. 206R. Most of them are already written off. One hydrofoil rocket ship of 206MR av. Turned out to be the Georgian “Tbilisi” boat, which in August 2008 of the year, in accordance with the legends and myths of the agitprop, was sunk by the Russian Mirage “Mirage” in a naval battle, but in fact was abandoned by its crew in Poti and blown by our paratroopers. 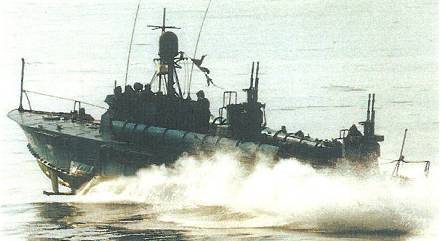 Overseas hydrofoil boats have also received practically no development. In the USA, 6 of Pegasus type missile ships were built, in Italy - 7 RC of the Sparviero type, in Israel - 3 RC of the M161 type, in Japan - 3 of the PKX type of PG01. Now all of them, except Japanese, are written off. China stamped out more 200 Huchuan-type hydrofoil torpedo boats, they were also exported to Romania, Albania, Tanzania, Pakistan, which then transferred them to Bangladesh. Now only 4 Bangladeshi and 2 Tanzanian Huchuan remain in the ranks. In general, for the Navy of the whole world, the CPC turned out to be a dead-end branch of development.

Hovercraft have become more promising. This same cushion is created by forcing fans of compressed air under the bottom of the ship, thanks to which the ship rises above the water and the characteristic impedance disappears completely. That allows not only to develop a tremendous speed (50 — 60 knots), but also to go on land.

The most developed hovercraft received again in the USSR (since the 1920-ies). West began to develop this direction only in the late 1950-x. It soon became clear that for such ships there is almost the same fundamental problem as for ships on hydrofoils - their useful mass cannot be large. To maintain the weight of a heavy ship you need to put very powerful fans. And for the movement of the ship need huge and powerful propellers, which take up a lot of space and are extremely vulnerable in battle.

As a result, the scope of such ships was very limited. In the USSR, they built quite a lot of air cushion landing ships (DKVP) of various types. The possibility (due to the ability of such vessels to go ashore) to land an landing “without soaking their feet” seemed very attractive. True, their landing capability was quite limited, and the vulnerability to fire even of small arms was extremely high (it was precisely the propellers that were particularly vulnerable). The largest steel DKVP pr. 12322 "Bison" (displacement of more than 500 tons, length 56 m, speed up to 60 knots, able to take on board 3 tank or 140 marines). Russia now has only 2 such ships left, but 3 we sold to Greece. We now have about 10 old DKVP pr. 12321, 1206 and 1205 smaller. 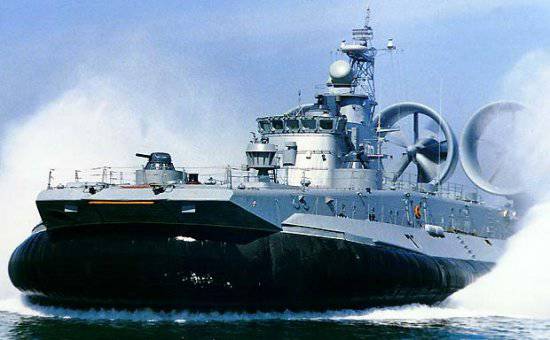 In addition to Russia, an LCAC airborne landing craft (150 T, 50 nodes, carries a 1 tank) was created in the USA. About a hundred such boats were built, they are based on American universal amphibious ships and amphibious ships-docks. Landing craft of pr. 724 in the amount of approximately 30 units were built in the PRC. These are probably the smallest hovercraft in the world: 6,5 t, length 12 m, take on board the 10 paratroopers. 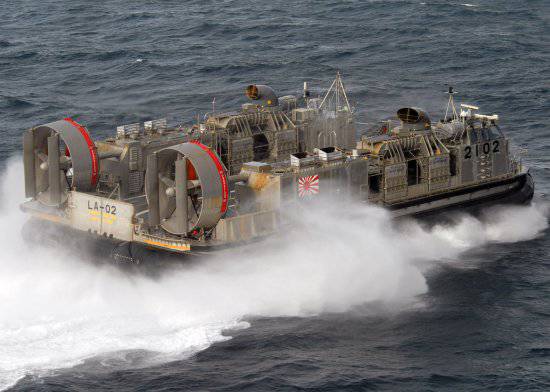 Small (from 15 to 100 tons) hovercraft air cushion boats were built by the British in the 1970s, including for sale to Iran (still under Shah) and Saudi Arabia. One Iranian KVP British built type VN. 7 died during the war with Iraq.

In the end, both domestic and foreign designers came to the idea to replace the rubber “skirt” supporting the air cushion with rigid plates called skegs. They are much better “skirts” hold the air inside the pillow, which allows to increase the mass of the ship. In addition, since the skegs enter the water, you can install propellers or water cannons on them, removing bulky and vulnerable propellers from the deck of the ship. At the same time, the resistance of the skegs is, of course, greater than that of the “skirt”, but much lower than that of the hydrofoil. Their only drawback - the ship loses the opportunity to go to land. Therefore, it is advisable to build skeg KVPs in the form of strike ships or minesweepers. In the latter case, the benefit is that the smaller part of the ship is in the water and the higher its speed, the less chance of being hit by a mine.

So far, Russia and Norway have a monopoly on such ships. We have on the Black Sea navy There are 2 skeg MRCs, pr. 1239 (Bora and Samum), the largest hovercraft in the world (displacement of more than 1 thousand tons). They have tremendous impact power (8 supersonic anti-ship missiles "Mosquito") and a speed of 53 knots. The disadvantage of these ships is poor air defense and, most importantly, the extreme difficulty in operation. 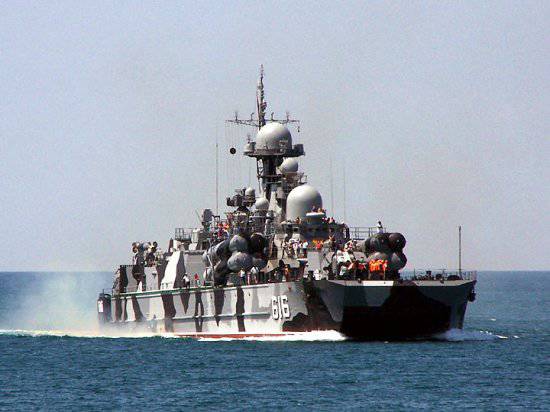 The composition of the Norwegian Navy includes 6 skeleton missile boats of the Skyold type and minesweepers of the Oksy type. They are significantly smaller than our RTOs (250 — 400 t). The rocket boats carry the 8 supersonic NSM anti-ship missiles. It can be noted that (except for Russia and Norway), China still has supersonic anti-ship missiles. 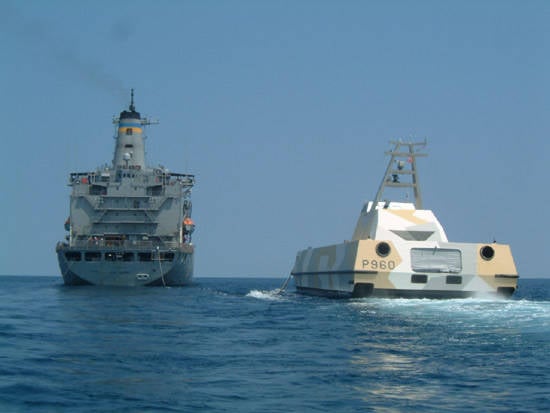 Although air cushion ships and more promising ships on hydrofoil, but they in no way solve the problem of speed because of the many limitations described above, as well as the high cost and complexity of operation.