It can not be worse (photo)

9 May 2012
22
Monuments dedicated to the Great Patriotic War are not to be scolded - taboo. Even if they were made poorly and were ugly from birth, as there were always plenty of hackers in this holy work, criticism is a special Soviet-Russian cynicism. Let's try to discuss the merits of some of these structures.

Tikhvin: a monument to Leningrad children

Many people know about the Lychkov tragedy: when a train with Leningrad children was bombed at the station between Staraya Russa and Valdai. Now there are three monuments there, and every year rallies and meetings of Lychkovets take place - those who survived in that hell of Leningraders and those who saved them.

Much less talk about another bombing that claimed the lives of many children in Tikhvin in the autumn of 1941. They say it was the last train that left Leningrad before the blockade ring closed. The memories of eyewitnesses, too, were terrible: "The children were badly burned, they crawled and stumbled, dying of pain, from the station to the city, and there were not enough people and supplies to help them ..."

But in Tikhvin, which is several times larger and richer than tiny Lychkov, there was not a single person who would have done what the Lychkovites succeeded: there is no monument at the station, and there is no one at the cemetery on Fishovaya Gora near the Church of Iov the Long-suffering. Only there is a standard dilapidated pyramid with an old sign indicating that there are Leningrad children here who died at the Tikhvin station in the autumn of 1941. Do not learn tikhvintsy Lychkovtsy? 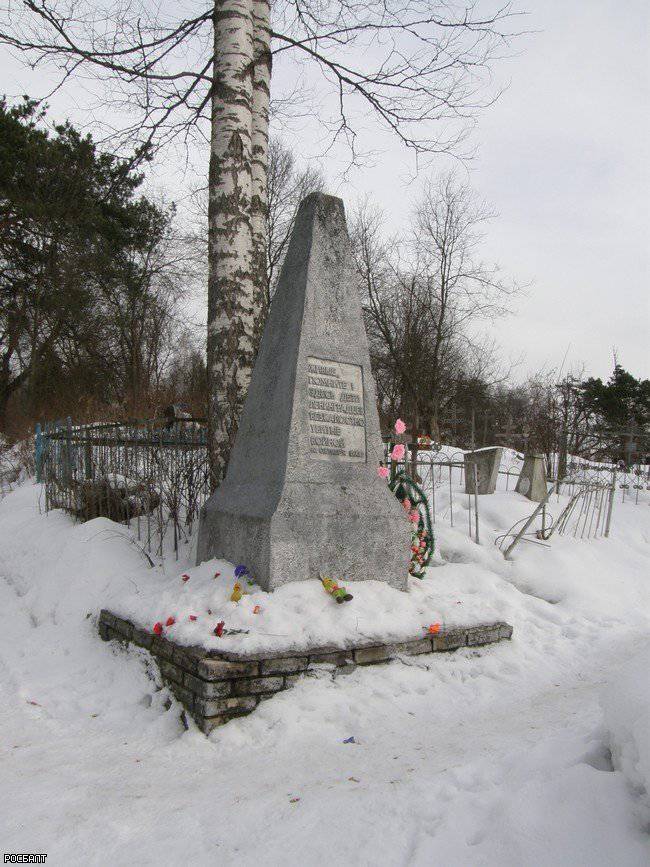 This is a very scary monument. Pregnant women and small children are not recommended to look at it. But they wanted a good one: a mass grave of soldiers and sailors who died in this land was built near the church in the village of Kerstovo in the Kingisepp District. And they placed such a monument on the grave. Relief of the soft, already rusted iron makes us remember films about aliens. No, earthly people do not have such faces: without faces, with eyes on the sides of the head, with a lipless, split mouth. Willingly, I want to launch another one in numerous local legends - about a flying saucer, destroyed by Germans over Boilers, and about glorious aliens who fought valiantly on our side, avenging for their dead comrades and damage to property. Cynically? And to put such a monstrous monument on the grave is not cynical? 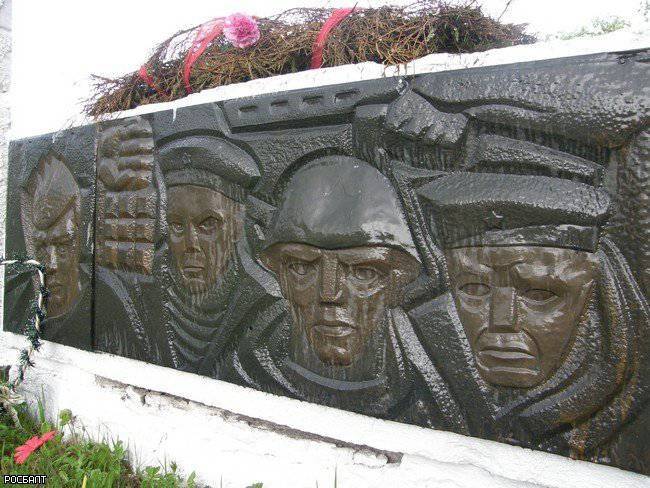 On a land torn by war, each volost has its own monuments. As a rule, these are unpretentious gypsum figures of warriors or mourning women on mass graves, often in the middle of a village cemetery. They are usually painted with silver paint, but in the village of Velikoye Selo outside Lake Cheremenetsky, such a mourning woman with a child was painted black, which made her make an eerie impression. The sculptor dedicated the monument to his mother (it is written at the foot of the monument), but the sculptor’s taste was very disappointing. The statue is very frightening even in the afternoon, and it is completely undesirable to be near it in the early winter evening - you can then dream. 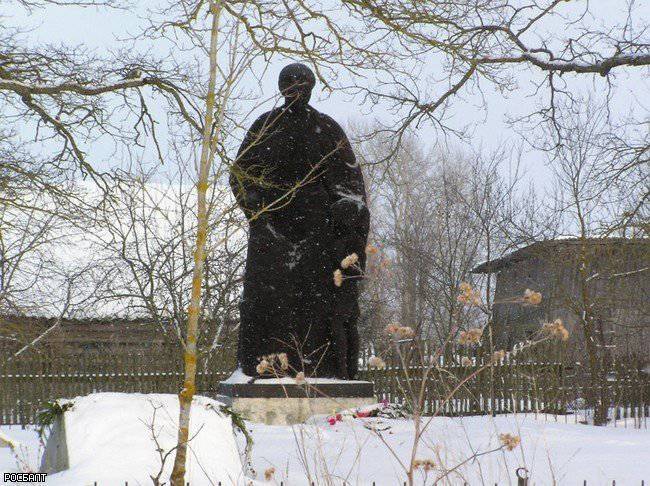 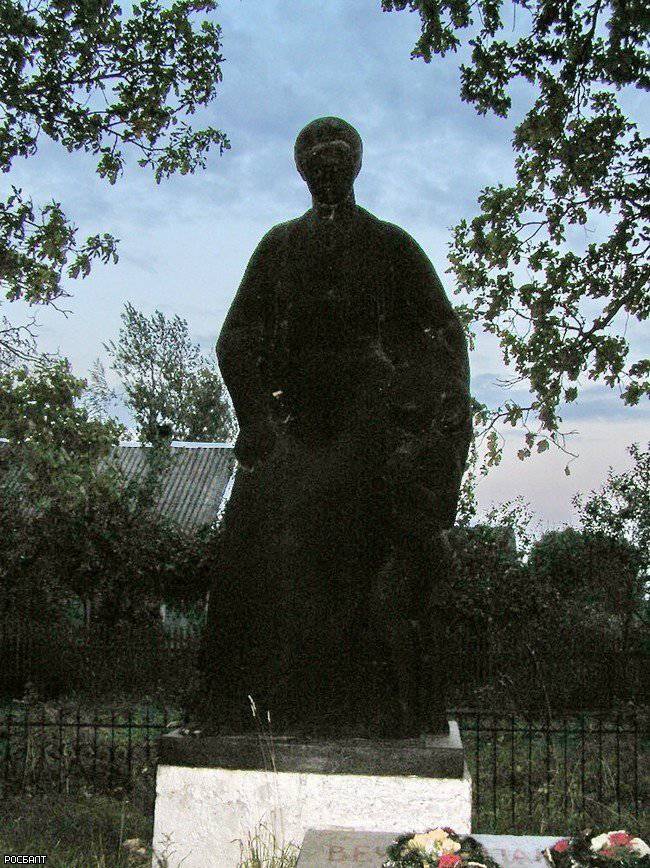 The district center Kingisepp is decorated with as many as two cannons at once: one at the entrance to the city from the side of St. Petersburg, the other at the “Grove of Memory”. The one at the “Grove of Memory” is a magnificent example of domestic artillery produced by the Perm cannon factory. This is the 122 – mm divisional howitzer of the 1910 / 1930 model. Several thousands of such guns were made, and they were very common in the Red Army before the start of the war. The 1910 project of the year was slightly reworked by increasing the charge volume, which increased the firing range by almost one kilometer. By the way, the Germans, having seized several hundred of these guns in the first years of the war, adopted them and even produced the necessary ammunition for them. This weapon was found at the bottom of the Luga - most likely, it fell there during the August 1941 retreat. He was raised and placed on a pedestal near the cathedral in 1959, and the gun was moved to this place in 2007, because a memorial grove was erected there in memory of those killed during the war.

But the cannon at the entrance, which symbolizes the heroic defense of the Luga line (not the city of Luga, but the river), is completely wrong. This is the 76-mm divisional gun ZIS-3, the most massive weapon of the Great Patriotic War and the most popular monument in the North-West. But she could not defend the Luga line, because they began to produce it only in 1942. The same claim applies to other similar guns placed at the 1941 battle sites of the year. 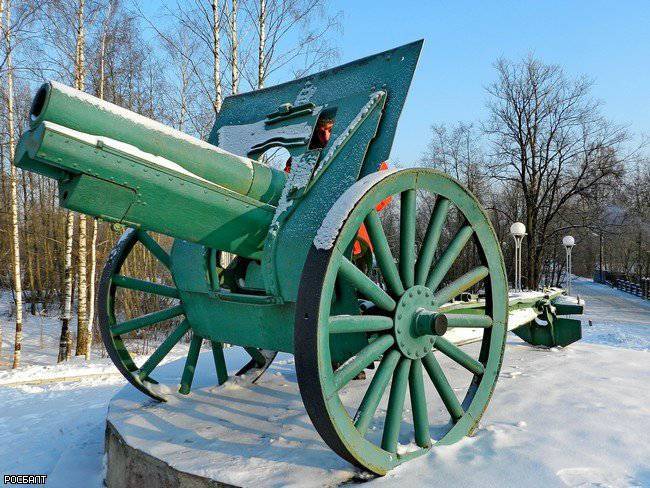 Vypolzovo: a monument to the burned village

We burnt a lot of villages in our region, and both burned our own people and others, now there are almost no witnesses left. In place of some of them are monuments. Here and in the village of Vypolzovo, burnt in 1943, in the Volosovsky district, a memorial obelisk was set up. He was hoisted in the 1985 year, as it is written on his wrong side, and now he is all skinned, crumbling. In the spring, it is usually surrounded by thick smoke: someone wants to burn grass in a non-settled village over freshly dug foundations - the “blacks” will not calm down at all. And it looks like it’s like it’s impossible to burn out a village since 1943. 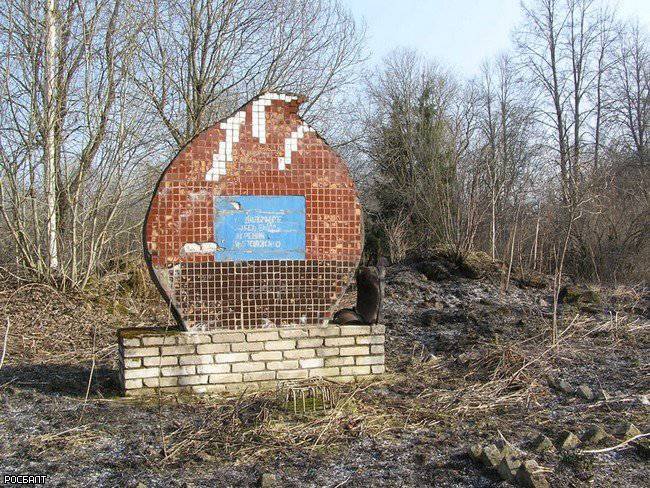 In the Luga district there are only two monuments of federal significance. One of them stands near the village of the Red Mountains behind the village of Osmino. He is dedicated to the heroic Soviet partisans, fortified by the Spanish Inter-Brigade. Page stories not very famous, but looking at the monument, which is lavishly decorated with the names of the "manufacturers" (the authors don’t dare say a word), only maxims come to mind that talent is rare and everyone wants to eat. Indeed, professional sculptors and architects built up the clumsy “Soviet Gabriel,” trampling on the “fascist reptile”. 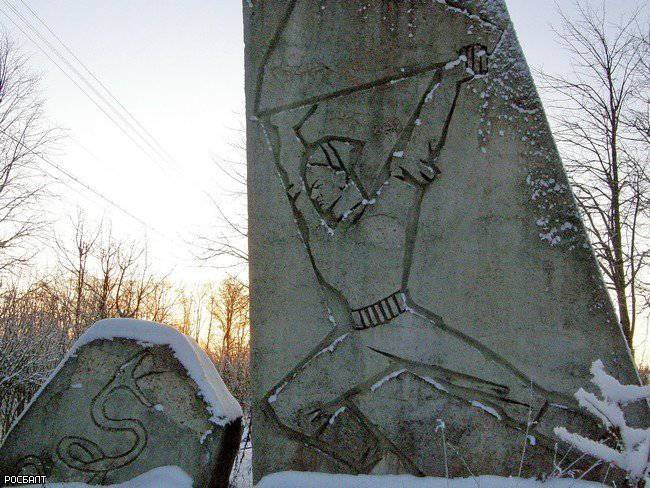 Pinaevy Gorki: there is no worse

But one circumstance pleases: not a single monument in the Leningrad region and next to it stood a “masterpiece” built by its neighbors. The memorial in the village of Pinaevy Gorki, in the Starorussky district, appeared recently, on the site of an ever-increasing mass grave - search engines find all the new dead every year in the Demyansky boiler. Locals immediately dubbed this nightmare "an explosion at a fraternal cemetery." One can see that this section has been constructed from very bad materials and has already begun to fall apart, but the tablet has not yet fallen off, announcing that this was done by the honored artist and honorary academician. 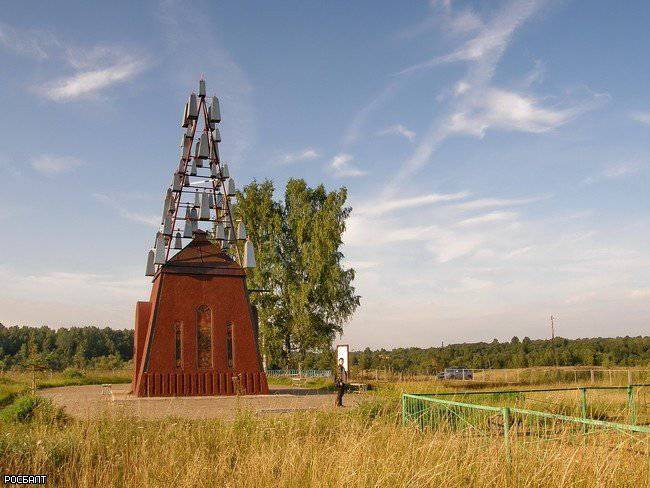