9 May 2012
24
The entire course of the Great Patriotic War clearly showed that not only sophisticated weapons systems with excellent characteristics, but also simple and cheap products can be effective. So, a small anti-tank mine can not only seriously damage, but also completely destroy the enemy tank, and a simple concrete pyramid can simply not let it into its territory. Among such simple and effective types of barriers and armaments, anti-tank hedgehogs have gained particular fame during the war years. Extremely simple and convenient in production, they greatly helped the Red Army soldiers in battles and even managed to become symbols of war. 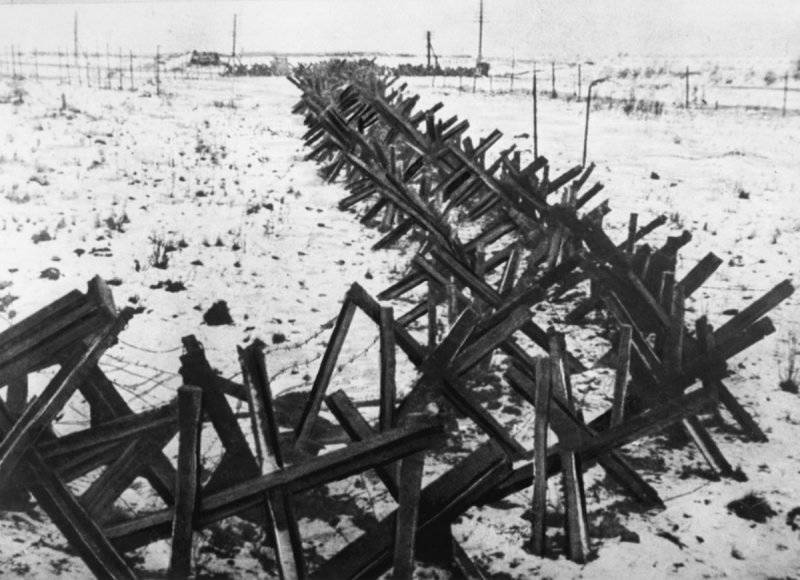 Anti-tank hedgehogs on the outskirts of Moscow

Barriers of various types have been used in military affairs since time immemorial. Even in ancient Rome, collapsible wooden structures were used, which were installed in those areas where it was necessary to prevent the enemy from breaking through. Over time, this idea only developed, connected with other inventions, such as barbed wire, etc. However, the appearance on the battlefield tanks, which were originally created as a means of breaking through barriers, required retaliatory action to maintain defense.

At first, sawheads appeared - granite or concrete blocks, installed on tank-hazardous directions. They were quite effective in deterring the enemy, which, however, was more than offset by the complexity of manufacturing and installation. Something simpler was required. The decision appeared in June 1941. Apparently, the idea existed before that, but the outbreak of war spurred the creation of a new barrier. In the first days of the war, Major General M.L. Gorikker, being the head of the Kiev Military Technical School, receives a new appointment. He becomes the head of the Kiev garrison. The beginning of his service in the new place Gorikker "notes" a technical proposal. He claims that his invention can be made even in the most difficult conditions and it will still perform its functions. 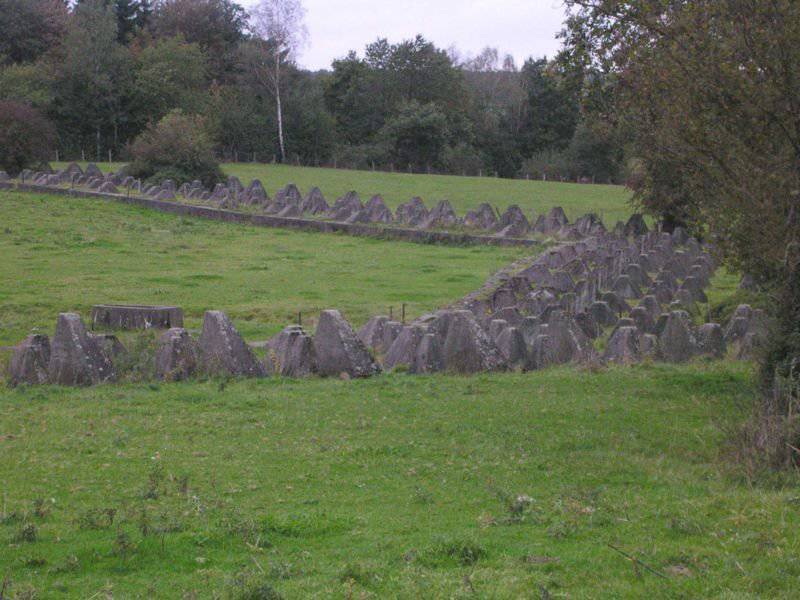 Gorikker proposed to assemble a six-pointed construction from metal rolled, which he called an "asterisk". Theoretically, any suitable metal part could be used as a raw material for asterisks. However, from the calculations of General Gorikker, it followed that the I-beam profile is optimal. Other types of rolled products - square beams, tavr or channel - did not fit the strength. Gorikker proposed riveting with kerchiefs as a method of joining beams. In principle, when appropriate, welding was also allowed, but even here everything rested on the strength of the structure: for sufficient rigidity and strength, welded sprocket had to use larger kerchiefs, which, in turn, led to unnecessary materials costs.

The simplicity of the proposed barrier allowed it to begin testing in the first days of July. A commission arrived at the small tankodrome of the Kiev tank technical school and several stars were delivered. An interesting fact is that the stars for testing were made of rail scrap. As it later turned out, the origin of the raw materials does not affect the protective qualities of Gorikker’s inventions. T-26 and BT-5 were used as tanks trying to overcome barriers. The results of the test drives of tanks on the four-row barrier were simply remarkable. So, during his first attempt to drive through the rows of asterisks, the T-26 tank lost its oil pump hatch and damaged the oil system. A few minutes after that, all the oil in the tank flowed out and the combat vehicle could not continue its “raid”. Repair took several hours. BT-5 got off a little better: speeding up, he was able to overcome the asterisks. However, it cost him a bent bottom and a damaged transmission. It needed repair again. The very first attempts to overcome the barrier of stars clearly showed their effectiveness, and the testers of the Kiev School tank school were instructed to select the optimal order for placing the new barrier. As a result, it was recommended to arrange asterisks in rows every four meters, and the distance along the front should have been one and a half meters for the front row and 2-2,5 m for the remaining rows. In such a case, having speeding up and moving through the first row, the tank could no longer continue high-speed movement and simply stuck between the rows of stars, in the process getting damage to the hull and, sometimes, to the internal units. 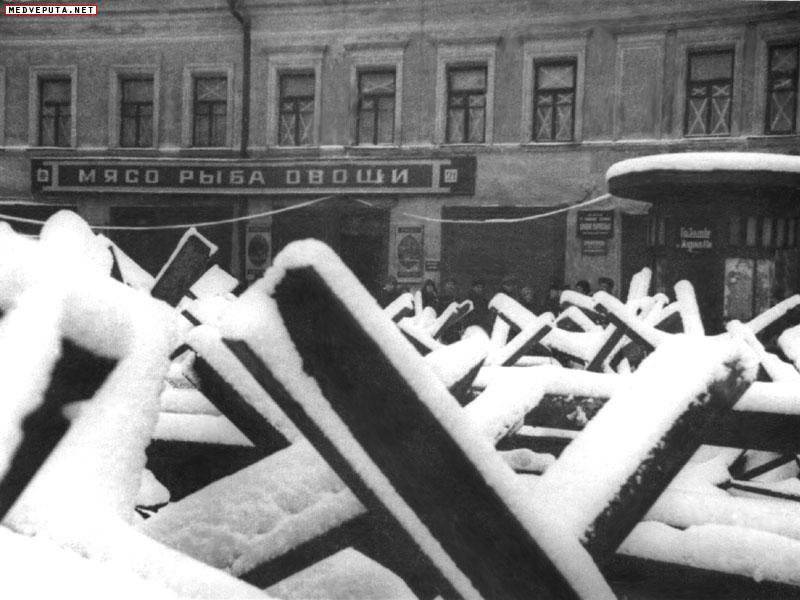 Anti-tank hedgehogs on the streets of Moscow. 1941

On the same tests and picked up the optimal size of a six-pointed asterisk. The height of the finished fence should be between one and a half meters. The reasons for this are as follows: the asterisk should be higher than the clearance of the tank, but at the same time its upper part should not rise beyond the upper cut of the lower front plate. In this case, for the first time tankers met with asterisks, seeing the small size of the obstacles and the absence of any attachment to the ground, they may want to simply move it aside. The driver starts moving forward, the asterisk gets under the lower frontal sheet, and from there it “creeps” under the bottom of the tank. In addition, in some cases, the asterisk may rotate under the front of the armored vehicle. Anyway, the tank that entered the asterisk is in a very uncomfortable position: the front end is suspended in the air. Moreover, the caterpillars that rose above the ground cannot provide proper adhesion to the surface, and the tank can no longer move out of the asterisk without assistance from the outside. An armored vehicle, designed to suppress enemy firing points, itself becomes a fairly easy target.

The ease of making Gorikker stars, combined with their effectiveness, influenced the further fate of the invention. In the shortest possible time, guidelines for the manufacture of barriers were distributed in all parts of the Red Army. For the characteristic appearance in the army, this barrier was called a hedgehog. It was under this name that Gorikker’s anti-asterisk entered history. The simplicity of production and low cost of raw materials made it possible in the shortest possible time to make tens of thousands of anti-tank hedgehogs and install them on a large part of the front. In addition, even the assembled hedgehog could be transported from place to place, which also improved the reputation of the new barrier product. In general, the new hedgehog fell in love with the Red Army. Much more he "liked" the German tank crews. The fact is that at first everything went exactly as Gorikker supposed - seeing an unfamiliar, but unfixed barrage, the tankers tried to move it and go further, which led to the suspension in a literal suspension. An unpleasant event, especially if there is a Soviet anti-tank gun somewhere nearby. One can hardly imagine a better target than a fixed tank raised above ground level. Finally, with a completely unfortunate set of circumstances, the hedgehog beamed through the lower front plate or bottom, went inside the tank and caused damage to the engine or transmission. Features of the placement of the transmission on the German tanks PzKpfw III and PzKpfw VI only increased the chances of the car to get such damage. 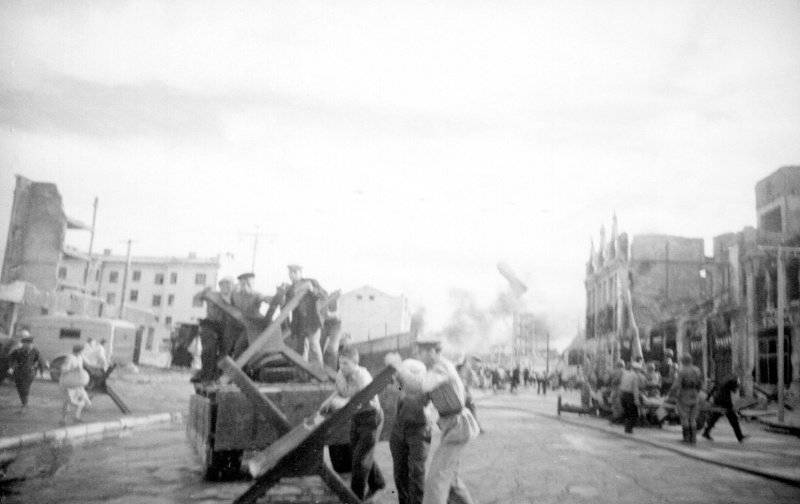 Residents of Stalingrad install anti-tank hedgehogs on a city street

True, the Germans quickly guessed that first you should make passes in the barriers, and then just walk along them. Here, to some extent, they were helped by the fact that the hedgehogs were not attached to the surface of the earth. A couple of tanks with the help of towing cables could quickly make a hole for the passage of troops. Red Army soldiers responded to this by laying anti-personnel mines next to hedgehogs, as well as, if possible, placing machine guns or anti-tank guns near the barrier. Thus, attempts to pull apart hedgehogs or tie them to a tank were severely punished with machine guns, and even artillery fire. Soon, another method appeared to make it difficult to make aisles: hedgehogs were tied together and tied to various objects on the ground. As a result, German tankers and sappers first had to solve a “puzzle” with cables and chains, and only after that did they clean the hedgehogs themselves. And do it all under the fire of the enemy.

However, an excellent idea, as often happens, had unsuccessful incarnations. So, often for reasons of economy or for other similar reasons, hedgehogs were made not from I-beams, but from other profiles. Naturally, the strength of such obstacles was less than necessary and sometimes a tank could simply crush the “wrong” hedgehog. Another problem with the Gorikker asterisks was the demands of the location - for it to effectively confront the tanks it needed a solid surface. Asphalt, which was strong enough to withstand the pressure of the tank on the hedgehog, was best suited. As for even more solid concrete, it was not recommended to put hedgehogs on it. The fact is that the friction on such a surface was insufficient and the tank could move the hedgehog, and not run into it. Finally, at some moments of the war, hedgehogs could not fulfill their duties for more pleasant reasons. For example, on the outskirts of Moscow, such barriers were installed in the fall of 41. But, fortunately, the Red Army did not allow the enemy to get close to the hedgehogs on the outskirts of the capital. 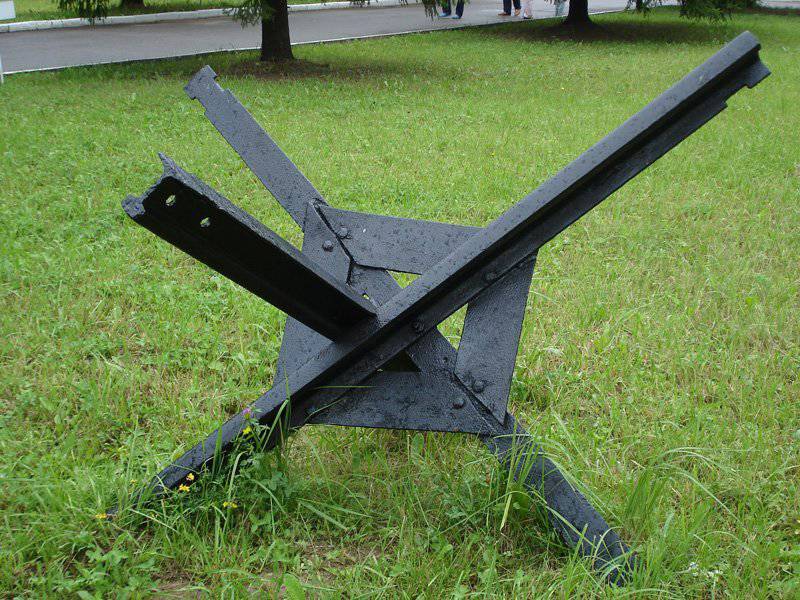 Anti-tank hedgehogs of the system of Major General M.L. Gorikker

Anti-tank hedgehogs of the system of Major General M.L. Gorikker played an important role in the Great Patriotic War. They helped relatively small forces to improve the capabilities of the army in deterring the enemy. It should be noted that the Gorikker invention was used not only by the Red Army. The Germans, retreating, also actively used a simple barrier structure of three rails and fasteners. On the approach to all the important points of the German defense, the Red Army had to see familiar angular objects. And the allies, having landed in Normandy, were also able to familiarize themselves with the Soviet means of blocking. There is an interesting opinion stating that the Germans themselves did not produce hedgehogs, but only sorted and stored the Soviet, which were useful by the end of the war. In any case, in the opinion of some historians, it is possible to explain a large number of hedgehogs in front of the German positions at that stage of the war when Germany experienced serious difficulties even with the production of weapons.

Currently, anti-urchin hedgehogs are almost completely out of use, although occasionally they can be seen next to military units or similar objects. Also anti-tank hedgehog, being one of the symbols of World War II, was actively used by sculptors in the creation of monuments. For example, a monument with hedgehogs on the Leningradskoe highway near Moscow marks the line on which German troops were stopped. Memorials similar to it can be found practically across all Europe, in places where there were fights. 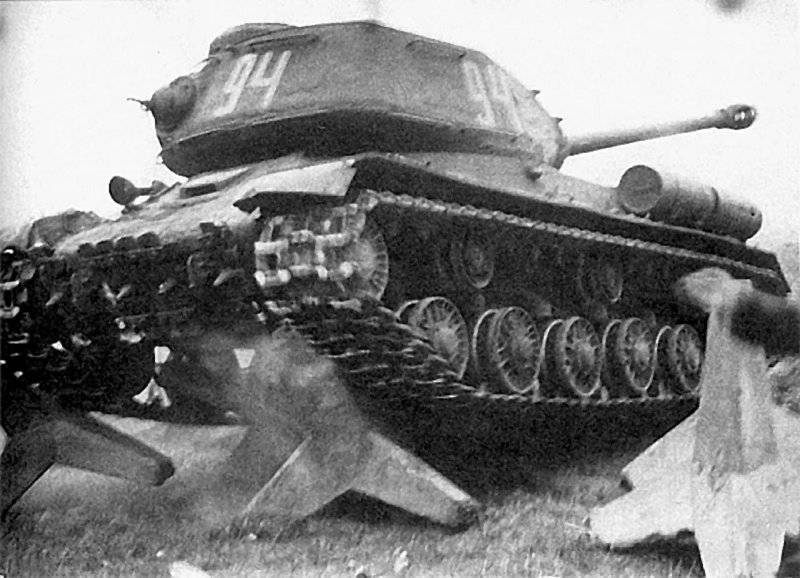