Stolen or "violated"? Space and defense indicators from the Accounting Chamber

19 May 2018
68
The Accounts Chamber of the Russian Federation published a report on the results of the audit of budget spending in 2017. The volume of violations, voiced in it, is almost twice as high as the previous year and amounts to 1,87 trillion. rubles. To say that this is a lot is to say nothing. But let's still try to figure out: is everything as sad as it seems at first glance. 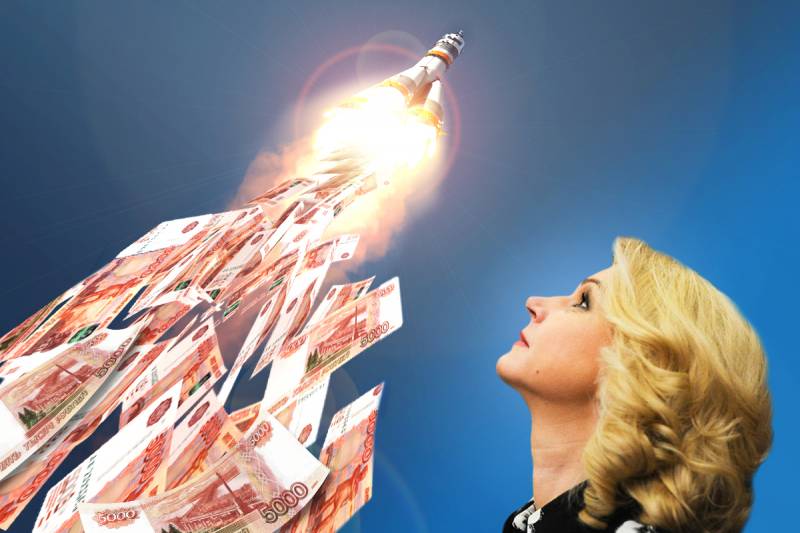 First of all, you need to pay attention to one fundamental point - the violation is not necessarily theft. And putting an equal sign here, stating that last year in Russia they stole almost two trillion rubles from the budgets of all levels, is completely wrong. Theft, of course, also present, we still do not live in a fairy tale.

But the lion's share of these violations falls on illiterate financial statements, conducting work in violation of regulations, inappropriate (formally) use of funds, etc. For example, is it possible to call embezzlement the construction of a facility of the Ministry of Defense, if this object is listed in the plans, money was allocated for its construction, project documentation was approved, but there were violations during the registration of the land plot? No, of course, the object is being built in accordance with the schedule, and, theoretically, there could do without theft at all. But such a violation could potentially create problems for the functioning of the object in the future, and therefore it cannot be overlooked.

In many ways, it is from these moments that the huge number of violations sounded. However, this should not reassure us: it is in this field of dubious or poorly documented costs that the main opportunities for corruption, theft, “drinking and kickbacks” lie.

Third-party experts point out several reasons for the increase in violations found. First of all, this is an increase in the quality of audit and its higher professionalism. At the same time, of course, the role of Tatyana Golikova is noted, which was the head of the Accounts Chamber in recent years. It is possible that this particular work was one of the reasons for her appointment as deputy prime minister in charge of the social bloc.

One more thing: 2017-th year was a year of election uncertainty, when the short-term interests of the officials prevailed over the long-term ones. To make it clearer, I will translate from expert to Russian - a lot of officials didn’t know if their places would remain, and it seems that she chose to steal as long as possible.

This is probably an accurate and honest assessment. In any case, I believe in her somehow more than Tatiana Alekseevna’s incredible professionalism. And if so, then the question remains whether something is changing in terms of combating corruption and responsibility for crimes of corruption. Somehow, too easily and massively, our officials recall their “short-term” interests ...

By the way, the Accounts Chamber also voiced the volume of violations, which almost certainly imply theft or corruption. And this is only 40 billion rubles, or 2% of the total amount of violations found.

How can you trust this figure? Let's leave it behind the brackets. Note for those who dare to doubt it: this is not the total number of thefts, but only those that were not previously identified. This did not include figures on already open criminal cases, the results of prosecutor's checks, the Investigation Committee, etc. And if you take this into account, everything becomes a little believable.

Of particular interest are the results of the audit in the defense and space industries. And it is all the more so because both of these industries have been harmed by the leaders in the list of least disciplined.

The space industry became the leader, in which 151 violation was revealed totaling 785,5 billion rubles! Moreover, the lion's share of all violations found in the activities of the liquidation commission of the Federal Space Agency. Violations when transferring the property of this agency to Roscosmos accumulated on 627,4 billion rubles - this is where the scale of the “short-term” interests was truly cosmic!

In second place in this "space race" was the construction of the Vostochny cosmodrome. Again, over the past years we have witnessed several criminal cases involving theft and misuse of funds at this facility. But here, as it turns out, there is still an open field for the activities of various inspection and control structures.

In total, following the results of 2017, the Accounts Chamber sent materials related to violations in the space industry to the 120 Investigation Committee. And the UK, as we know, deals not with violations, but with crimes. But, unfortunately, we will not be able to see the full picture: most of the materials have a “for official use” or “top secret” signature, which means that the result on them is also likely to be closed.

The defense sphere has also become one of the leaders in the number and volume of violations. They were counted for a total of 544,5 billion rubles. But it is noteworthy that only six materials were sent to the prosecutor’s office, on which 36 prosecution submissions were made, two administrative and one criminal cases were initiated. In this connection, I just want to joke about the mountain that gave birth to the mouse. But is there any joke?

In total, violations in the defense and space industries amounted to approximately 1 trillion. 300 billion rubles, or more than two-thirds of all violations found. In this connection, among other things, the question arises: are we really so good in other industries, or did the Accounts Chamber’s so close attention to space and the defense industry come from some specific reasons? Is everything great in construction? In the social sphere? In the export of energy, fish, forests, metals, mineral fertilizers?

After all, we live in a country where it is impossible to exclude the use of a joint venture as a tool of clan struggle or, good, espionage. And this, I confess, is alarming ...

At the same time, regardless of the motives of the management of the Accounts Chamber, it is necessary to note the presence of really serious problems in the management of our space and defense industry. And in the space industry, this is noticeably the same for people who are far from both the technical and financial component of rocket launches.

And one can only hope that the arrival of D. Rogozin to the post of head of "Roskosmos" will somehow turn the tide.

And Tatyana Alekseevna Golikova thanks a lot. But vigilance, as they say, do not lose ...

Ctrl Enter
Noticed oshЫbku Highlight text and press. Ctrl + Enter
We are
Results of the week. “In our cooperative, the board is always agreed”Results of the week. "God forbid to see Russian revolt, senseless and merciless!"
Military Reviewin Yandex News
Military Reviewin Google News
68 comments
Information
Dear reader, to leave comments on the publication, you must sign in.