Incident with the MiG-31 in the Perm region

18 May 2018
77
The right engine of the MiG-31 aircraft on the runway caught fire on Friday at the airfield in the Perm region, the press service of the Central Military District reports. 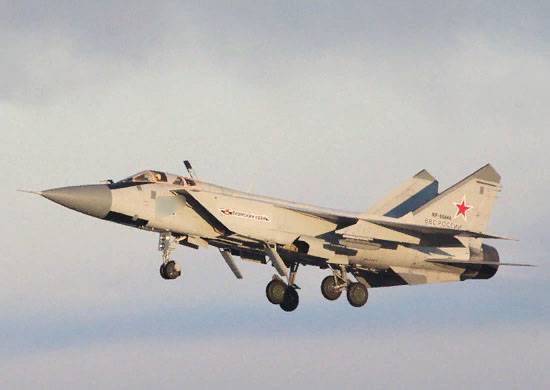 18 on May around 17.30 Moscow time at the airfield in the Perm region when driving on the runway, the right engine of the MiG-31 aircraft caught fire. The crew performed emergency braking, the engine was extinguished by the regular fire brigade
- The press service of the Central Military District

As the eyewitness reported to the agency, the fire occurred on the runway while the aircraft was in motion.

Then the plane stopped, and then everything began to tighten with black smoke.
- noted the agency interlocutor.

According to a source familiar with the situation, the plane caught fire due to a short circuit.

The pilots were preparing to make a training flight, however, when leaving the runway, according to preliminary data, a short circuit occurred in the aircraft engines and a fire started
- Said the source.

The plane was extinguished by the rescued fire engine, both pilots were evacuated and not injured. The plane was without ammunition.

Ctrl Enter
Noticed oshЫbku Highlight text and press. Ctrl + Enter
We are
The situation in the south-east of Ukraine. Chronicle of events. 3 May
Military Reviewin Yandex News
Military Reviewin Google News
77 comments
Information
Dear reader, to leave comments on the publication, you must sign in.