18 May 2018
79
World War II showed the world a huge number of different tanks, some of them forever entered historyby creating a real historical and cultural code, familiar to almost every person. Such tanks as the Soviet medium tank T-34, the German heavy tank "Tiger" or the American medium tank "Sherman" are widely known today, they can often be seen on documentary footage, in films or read about them in books. At the same time, before the beginning and during the Second World War, a huge number of tanks were created, which remained, as it were, behind the scenes, although they also personified examples of the development of tank construction in different countries, though not always successful ones.


Let's start our series of articles about little-known tanks of that period with the Soviet heavy tank KV-85, which was released in 1943 a small series of 148 combat vehicles. We can say that this tank was created in a hurry, as a response to the emergence of new heavy Tiger tanks in Germany. Despite the relatively small series, the KV-85 tanks were actively used in combat operations in the 1943-1944 years, up to the complete retirement from the Red Army units. All tanks sent to the front were irretrievably lost in battle or written off due to irreparable damage and malfunctions. Only one fully authentic KV-85 has survived to the present day.

The name of the KV-85 tank is informative enough; we have a version of the heavy Soviet tank Klim Voroshilov with the new main weapon - the 85-mm tank gun. This heavy tank was created by experts of the experimental plant design bureau No.100 in May-July 1943 of the year. Already 8 August 1943, the new combat vehicle was adopted by the Red Army, after which the tank was launched into serial production at ChKZ - Chelyabinsk Kirov factory. Production of this model was carried out in Chelyabinsk until October 1943, when it was replaced on the conveyor by a more sophisticated heavy tank EC-1, which, by the way, was released by an even smaller series - only 107 tanks. 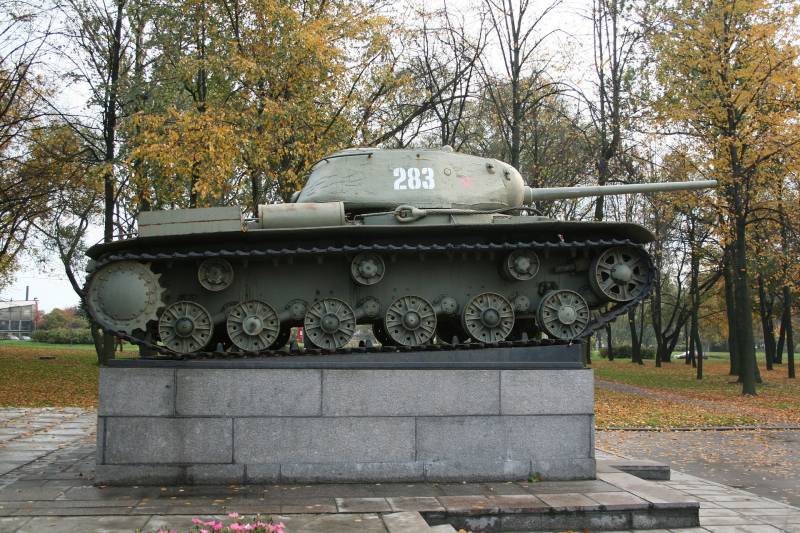 KV-85 was the answer to the appearance on the battlefield of the new German tanks "Tiger" and "Panther". By the summer of the 1943, the KV-1 and KV-1s were already morally obsolete, primarily because of their weak weapons, the 76-mm tank gun could no longer cope with the new German tanks. It did not pierce the "Tiger" in the forehead, it was possible to confidently hit the German heavy tank only in the hull or stern and from very small distances - 200 meters, while the "Tiger" could easily shoot KV tanks at all distances of the tank battle of those years . It should not be assumed that the idea to equip Soviet tanks with more powerful weapons appeared only in the 1943 year. Even before the war, in 1939, the first attempts were made to arm tanks with more powerful 85-95 mm caliber guns; however, with the start of the war, such work was temporarily stopped, and the guns themselves seemed excessively powerful at that time. The fact that the cost of 85-mm guns and projectiles to them was higher than that of standard 76-mm also played its role.

However, by 1943, the issue of rearming Soviet armored vehicles finally matured, demanding urgent solutions from designers. The fact that the army’s need for new tanks was enormous is indicated by the fact that the KV-85 was adopted by the Red Army already on August 8 1943, even before the end of the full cycle of its tests. At the same time in August, the tank was put into mass production. The prototype of the tank was built at the pilot plant No. XXUMX using the KV-100 tank chassis and the turret from the unfinished EC-1, the remaining tanks were manufactured by ChKZ. When assembling the first combat vehicles, the accumulated reserve of armored hulls for the KV-85 tank was used, so cuts for the expanded turret chase were made in the under-turret box, and the holes for the spherical installation of the course gun had to be brewed. The subsequent series of tanks in the design of the armored hull were made all the necessary changes.

At the same time, the heavy tank KV-85 was initially considered as a transitional model between the KV-1 tank and the new EC-1 tank. From the first, he fully borrowed the chassis and most of the details of the armored hull, from the second - a tower with a new gun. The changes concerned only the armored elements of the podbashnoy box - in the KV-85 tank they were made anew to accommodate a new and more overall compared to a heavy KV-1 tank with a shoulder strap - 1800 mm. KV-85 had a classic layout, which was typical for all serial Soviet medium and heavy tanks of those years. The tank hull was successively divided from the bow to the stern into a control compartment, a fighting compartment and an engine compartment (MTO). The tank driver was located in the control room, and three other crew members in the combat compartment, which united the turret and the middle part of the armored hull. Here in the fighting compartment was located ammunition and gun, as well as part of the fuel tanks. The transmission and engine - the famous diesel B-2K - were located in the stern of the tank in the MTO.

Being a transitional tank, the KV-85 combined in itself both the merits of a more spacious turret with the 85-mm gun of the EC-1 tank and the disadvantages of the KV-1 tank undercarriage. In addition, the KV-85 inherited from the last one the hull booking insufficient for the second half of 1943 (the largest armor in the forehead was 75 mm, the sides were 60 mm), which allowed providing adequate protection only from German cannon fire to 75-mm. At the same time, the most popular by that time German Pak 40 anti-tank gun was an ample means for successfully fighting the new Soviet tank, although with increasing distance and under certain course corners, the KV-85 was enough to protect against its projectiles. At the same time, the long-barreled 75-mm Panther cannon or any 88-mm gun easily punched the KV-85 hull armor at any distance and at any point. But the turret borrowed from the IS-1 tank compared with the standard KV-1 turret provided more reliable protection against artillery shells (100 mm gun mask, 100 mm tank sides), also improving the convenience of the tank crew.

The main advantage of the new KV-85, which set it apart from all Soviet tanks of the time, was the new 85-mm D-5T gun (before launching the EC-1 tank in November 1943 of the year). Previously tested on the SU-85 self-propelled artillery, the D-5T tank gun was really an effective means of fighting even new German tanks, ensuring their defeat at a distance of up to 1000 meters. For comparison, the 76-mm gun ZIS-5, which was installed on tanks KV-1, was almost completely useless against the frontal armor of a heavy tank "Tiger" and hardly hit him in the board at distances beyond 300 meters. Moreover, increasing the caliber of the gun to 85-mm had a positive effect on the high-explosive fragmentation ammunition power. This was especially important since the KV-85 tanks in the Red Army were used as heavy breakthrough tanks. On the other hand, the practice of combat use has shown the need for a further increase in the caliber of heavy tanks in order to confidently defeat powerful enemy bunker and bunkers.

The installation of a new, more powerful gun on the tank required a change in the ammunition, the tank ammunition reduced to 70 projectiles. At the same time, instead of a frontal machine gun, located in a spherical installation to the right of the mechanical input, a stationary exchange gun was mounted on the KV-85 tanks. Unmanned fire from this machine gun led mehvod himself, which made it possible to reduce the crew of the tank to four people, excluding from the crew of the gunner-radio operator. At the same time the radio moved to the place next to the tank commander. 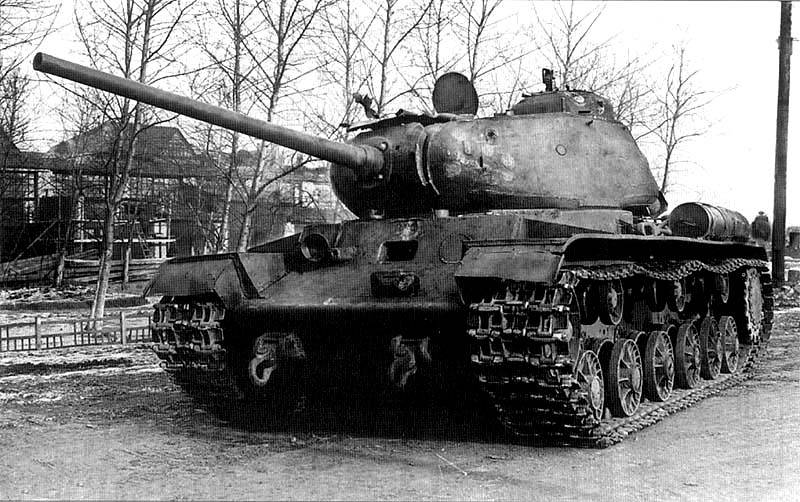 KV-85 became the first Soviet serial tank that could fight with new German armored vehicles at distances up to one kilometer inclusive. This fact was appreciated by both the Soviet leaders and the tankers themselves. Despite the fact that the muzzle energy of X-NUMX-mm D-85T guns in 5 t • m exceeded that of the Panther cannon KwK 300 (42 t • m) and was not so much inferior to the gun of the Tiger tank KwK 205 (36 t • m), the manufacturing quality of Soviet armor-piercing ammunition was lower than that of German projectiles, therefore in armor penetration, the D-368T was inferior to both of the above-mentioned guns. The conclusions of the Soviet command from the combat use of the new 5-mm tank gun were mixed: the effectiveness of the D-85T cannon was not in doubt, but at the same time it was noted that it was inadequate for arming heavy tanks, which should have outnumbered enemy combat vehicles in this indicator. As a result, it was further decided to arm the 5-mm cannon of medium T-85 tanks, and the new heavy tanks should have received more powerful 34-mm or 100-mm guns.

Despite the fact that the KV-85 corps still allowed the deployment of more powerful artillery systems, its modernization potential was exhausted in full. Designers of the plant number 100 and ChKZ was understandable even in relation to the KV-1 tank. This mainly concerned the impossibility of strengthening the reservation of the tank and the improvement of its engine-transmission group. For this reason, in the light of the planned early launch into mass production of new tanks of the IC family, the KV-85 heavy tank was considered from the very beginning as a temporary solution to the problems. Although the production process of the KV-1 tank (and then the KV-85) was fine-tuned at Soviet enterprises, the front needed new tanks with more powerful armor and armament.

Organizationally, the KV-85 tanks entered service with the OGvTTP, a separate Guards heavy tank regiment. Tanks went to the front literally from the factory, they began to arrive in parts already in September 1943. Each such regiment had a 21 heavy tank - 4 companies of 5 combat vehicles plus one regiment commander tank. In addition to the tanks, each regiment consisted of several unarmored support and support vehicles — trucks, jeeps and motorcycles; the regimental strength was 214 people. The shortage in the front parts of the heavy ACS SU-152 led to the fact that in some cases, the KV-85 tanks could be nominally entered into the composition of individual heavy self-propelled artillery regiments (OTSAP), where they replaced the missing self-propelled guns. 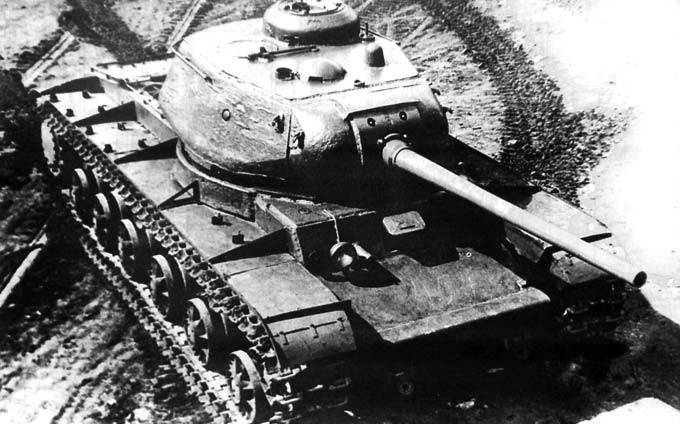 At about the same time, at the end of 1943 of the year - the beginning of 1944 of the year (with some delay necessary for the formation of new units and sending them to the front), heavy KV-85 tanks engaged the enemy, mainly they were used in the southern directions of the front. Slightly inferior in its characteristics and capabilities to new German heavy tanks, battles with the participation of the KV-85 went with varying success, and the result of the confrontation with the enemy was largely determined by the training of tank crews. At the same time, the main purpose of the KV-85 at the front was not tank duels, but a breakthrough of the enemy’s prepared defense lines, where the main danger was not the enemy’s armored vehicles, but its anti-tank weapons, engineering and mine-explosive barriers. Despite the insufficient booking for the end of 1943, the KV-85 tanks performed their task, albeit at the price of appreciable losses. Intensive use at the front and a small amount of mass production led to the fact that by the fall of 1944, there were no KV-85 tanks left in combat units. This was caused by the irretrievable loss and write-off of faulty machines. Any mention of combat use of KV-85 tanks after the fall of 1944 has not been preserved to this day.