Triumph of deck aircraft in the sky of Vietnam 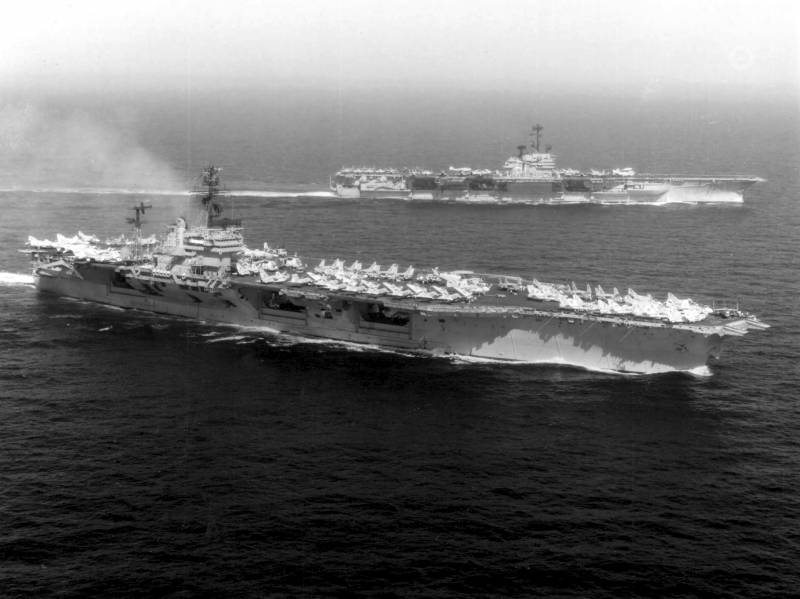 Questions about applying deck aviation USA in Vietnam (with answers).

The number of combat trips carrier strike groups to the shores of Vietnam? (Answer - 66 Battle Trips).

The total number of days spent by aircraft carriers at the position of “Yankee”? (Answer - 9178 days).

What is the position of “Yankee”? (The answer - the area of ​​military maneuvering American AUG off the coast of Vietnam, also known as the “Tonkin Yacht Club”).

Which of the aircraft carriers made the greatest contribution to the victory over the enemy? (The answer - the largest contribution was made by the nuclear power plant “Enterprise”, which made six combat trips. During that time, its air wing performed 39 thous. Sorties and threw thousands of tons of ammunition on Vietnamese 30 heads).

The value of carrier-based aviation in Vietnam? (The answer is a key element fleetable to independently solve any range of tasks, including strategic ones).

What is behind the abbreviation TF 77?

77 th operative connection (Task Force 77) - formerly designation of a carrier strike connection in the US Seventh Fleet (the fleet’s area of ​​responsibility is the entire western Pacific Ocean and the eastern Indian Ocean). Unlike domestic practice, where every warship is permanently part of a particular fleet or flotilla, the American Seventh Fleet exists only on paper: any ship that crosses the X longw long meridian of the western longitude is automatically included in its composition. If we are talking about the carrier strike group, the commander of the AUG is appointed to the post of commander of the Seventh Fleet.

In an effort to perpetuate the memory of the feats of naval aviation, the Americans after the war hastily renamed the 77 th operational connection to Guards 70 So that no one has any associations with heroes who threw bombs on Hanoi.

But these are all general comments. What were the details?

Let me quote the facts and excerpts from the chapter “US Navy Participation in the Vietnam War” (by V. Dotsenko), which describe the details of the organization and combat work of the 77 operational connection. 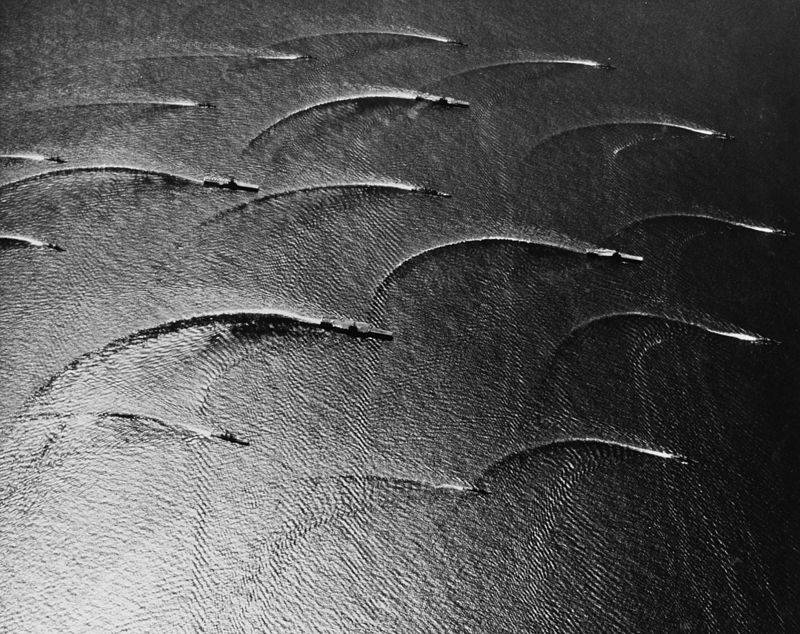 To the solution of the tasks of destroying ground-based military and industrial facilities of the DRV, the Americans attracted considerable fleet forces. As part of the 77 th operational connection, there were constantly from 1 to 5 aircraft carriers with powerful escort, which included up to 5 missile cruisers, up to 15 squadron destroyers and frigates.

Despite the lack of opposition at sea, the American command carried out a full range of measures for the organization of all types of AUG defense. Middle order of protection, consisted of cruisers, destroyers and frigates that accompanied the aircraft carrier at a distance 20 - 30 cab. Airborne early warning aircraft patrolled around the clock, cover fighters on duty, either in the air or on the catapults in full readiness. The PLO was assigned to a specially organized anti-submarine search and strike group, incl. planes of the basic patrol aviation "Orion" and "Neptune" patrolling in the near and far zones.

The average duration of the presence of aircraft carriers in the 7 fleet left 175 — 250 days, including 5 — 6 exits to the combat zone for a maximum of 24 hours 50. The time spent by aircraft carriers in the combat maneuvering area was 108 — 136 days, the transitions were spent on average up to 45 days, and on parking in bases — up to 60 days. The current repair and combat training took on average from 170 to 210 days. The transfer of aircraft carriers from the US west coast to the operating zone of the 7 fleet occupied 14 days, and from the east - twice as long.

While staying in the combat maneuvering area, each aircraft carrier continuously participated in combat operations for one to two weeks, after which a day was provided for the rest of personnel and the repair of aircraft. When they were in the 3 area of ​​aircraft carriers, one of them, as a rule, was in reserve, with the other two aircraft operating an average of 12 hours per day.

The combat maneuvering area (“Yank”) of the forces of the 77 operational link from February 1965 to January 1973 was located in the Gulf of Tonkin. Its dimensions were 140x160 miles, and the distance from the coastline was 40 - 80 miles (the far edge - on 100 - 120 miles). Each of the carrier strike groups had its own subdistrict. Within this region, replenishment points were assigned, where one of the service connection groups, or the so-called “floating rear,” was constantly located. American aviation operated at distances of 200 - 650 km from the center of the combat maneuvering area (the front of the strikes reached 400 - 650 km).

In total, during the war, the aircraft carriers of the 77 operational connection lost 860 aircraft (the main reason was the loss of combat).

In general, the indicated average (!) Number of sorties (178 from one AV per day, and more than 300 from two AV) causes great distrust.

A significant role was played by the emergence of new types of aircraft. By the time the war began (1965), two new aircraft were adopted by the navy, which significantly expanded the scope of carrier-based aircraft. We are talking about the E-2 “Hokai” long-range radar detection aircraft (replaced the outdated E-1 “Tracker” DRLO E-6) and the all-weather attack aircraft A-XNUMX “Intruder”, which, despite sluggish LTX, had an important advantage: it was able to act in the dark.

The attack aircraft was equipped with DIANE sighting and navigation system, consisting of two radars. The search radar provided tracking and attack of ground targets in any weather conditions. The second (navigation) radar served for automatic tracking of point targets and terrain mapping.

His one aircraft development during the Vietnam War was the light-carrier attack aircraft A-7 “Corsair II”. Created on the basis of and externally little different from the F-8 Fighter "Kruseyder", the new widow attack aircraft surpassed the outdated SkyHawk A-4. 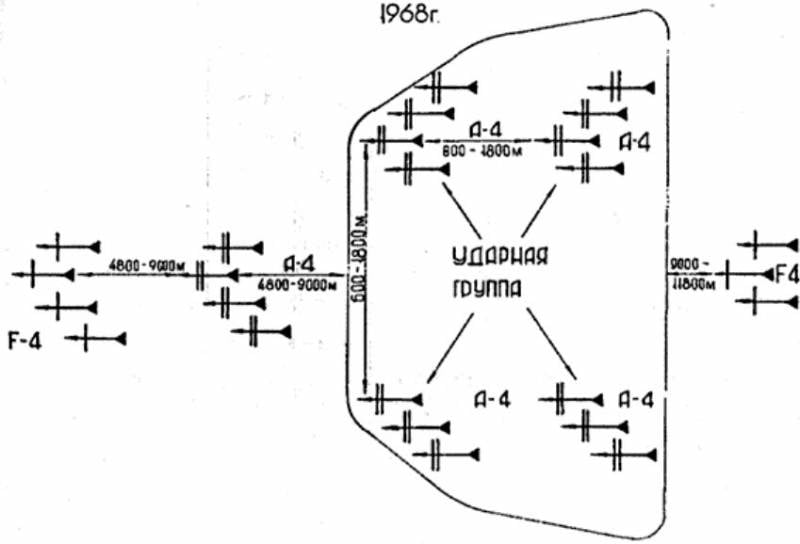 Battle formation of US Navy carrier when attacking ground targets

The American plan of attack on Vietnam had 100 advantages, and only one drawback. He flew to hell.

As we already know, deck aircraft is a unique fleet instrument capable of solving strategic tasks. Before you take this statement for truth, let me know the size of Vietnam. (The answer is that the area of ​​Vietnam is 2% of the area of ​​the Russian Federation).

When do Americans celebrate the day of victory over Vietnam? (The answer is never; the war was lost).

Then how are the statements about the “strategic nature” of the carrier groups and the shameful loss of a local war connected? (The answer is no. Two dozen AUGs couldn’t do anything with a country the size of Tomsk Oblast).

Having tied up the abyss with the height
The triumph of victories with the shame of defeats ...

Well, let's continue our acquaintance with little-known facts about the Vietnam War.

Who and where did the main blows to Vietnam come from? (The answer - the main part of the American tactical aviation was located at the air bases of Korat, Takli, Udon Tani and Ubon in the territory of nearby Thailand).

What airbases were used directly on the territory of Vietnam? (The answer is that the most famous were Saigon International Airport (Tan Son Nat) and the Cam Ranh airfield, later transferred to the USSR and turned into a Soviet outpost in Southeast Asia).

Where did strategic bombers B-52 fly from? (The answer is that part of the strategists was located at U-Tapao airbase in Thailand, the other part operated from the base on Guam).

The main type of strike aircraft that performed the 75% strike missions in the initial period of the war? (The answer is F-105 “Thunderchief”). 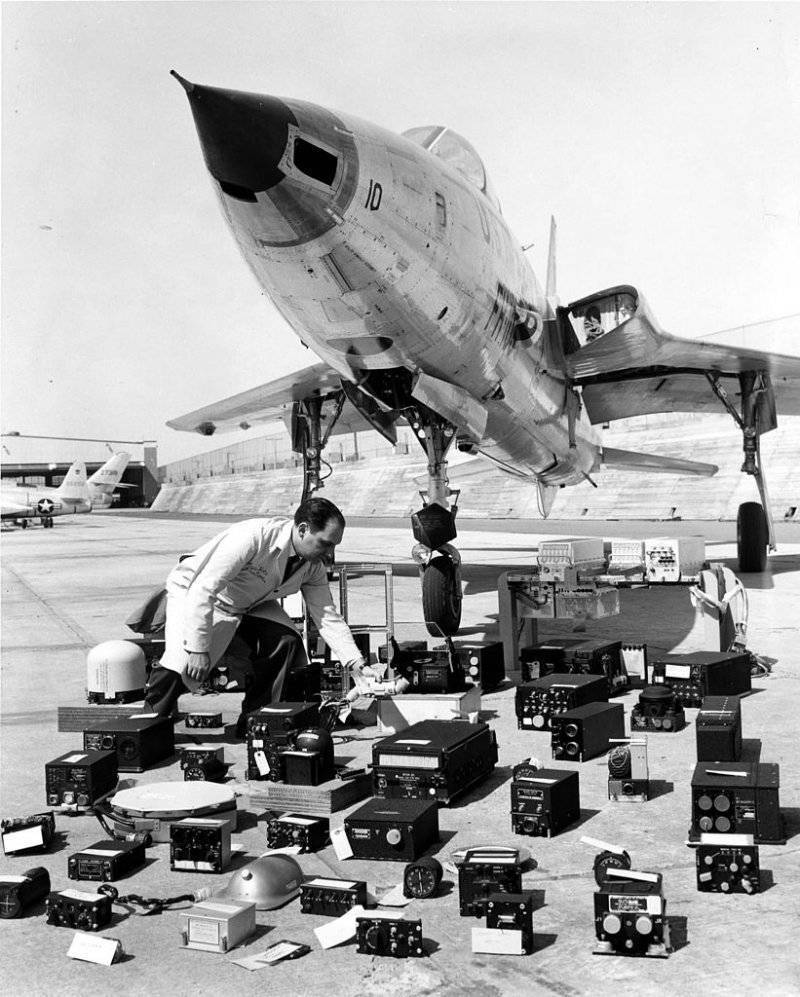 Due to the high LTH and exceptional capabilities of their on-board electronic complex (NASARR), capable of directing the aircraft at a target in any conditions and flying at an ultra-low altitude, automatically distinguishing the features of the terrain, determining the slant distance to the selected point and signaling obstacles along the course, used to attack the most important and well-protected targets. Among them are the main tank farm in the suburb of Hanoi, the metallurgical plant in Taynguyen, the railway bridge across the Red River on the border with China, the Katbi airfield where the helicopters delivered from the USSR were assembled, the main "MiGs lair" - Fukyen airbase.

The intensity of the use and role of the US Air Force in the Vietnam War is eloquently shown by the loss: 2197 of the aircraft that did not return.

The air force bore the brunt of the air battles and executed 2 / 3 sorties in that war. In absolute terms, about a million sorties, twice as many as the wings of all AUGs made during sixty-six combat trips to the coast of Vietnam.

Fans of carrier-based aviation will rightly note that this structure did make a significant contribution to the war. At the same time, they themselves are not amused because:

a) 17 aircraft carriers “blown” war with a tiny coastal country;

b) it turned out that even in a war with a tiny coastal country I had to completely rely on classical air forces.

Such is the natural ending of the epic with deck aircraft and fleet attempts to declare itself in the sky over land. 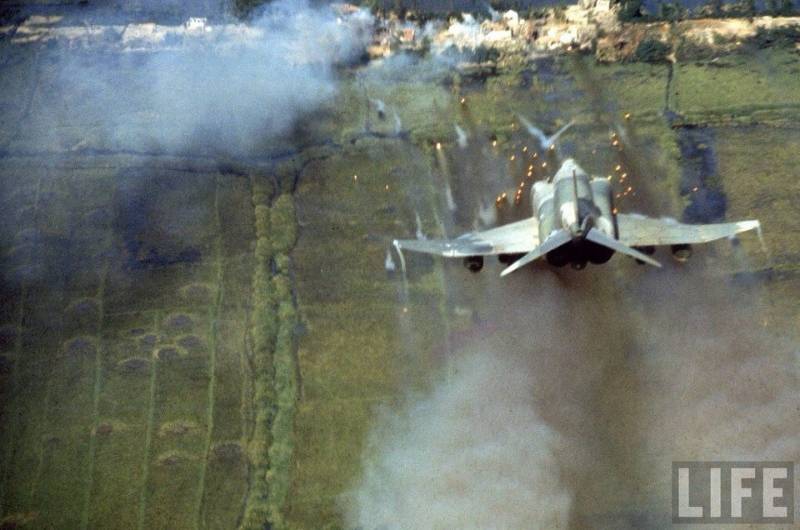 The article used materials from the book V.D. Dotsenko “Fleets in local conflicts of the second half of the twentieth century”.