18 May 2018
65
Comparisons of modern and promising armored combat vehicles are popular, which leads to the appearance of new and new publications on this subject. A few days ago, the American publication The National Interest re-published its views on a hypothetical battle involving promising tanks. It is noteworthy that this time we are talking about the battles of the distant future, in which only the developed vehicles are to participate.


15 May published an article "Tank War: America's New 'M1 Abrams vs. Our Deadly Armata (Who Wins?) ”(“ Tank war: the “new” American M1 Abrams against the deadly Russian “Armata”. Who will win? ”) The article was authored by The Buzz and Security.

At the beginning of the article, the authors briefly outlined the possible prerequisites for a conflict involving the newest tanks of the leading countries of the world. If the contradictions between Russia and the United States lead to the start of open clashes in Europe, such a conflict risks developing into a full-scale nuclear war. Thus, the potential Third World War risks ending with an atomic Armageddon. 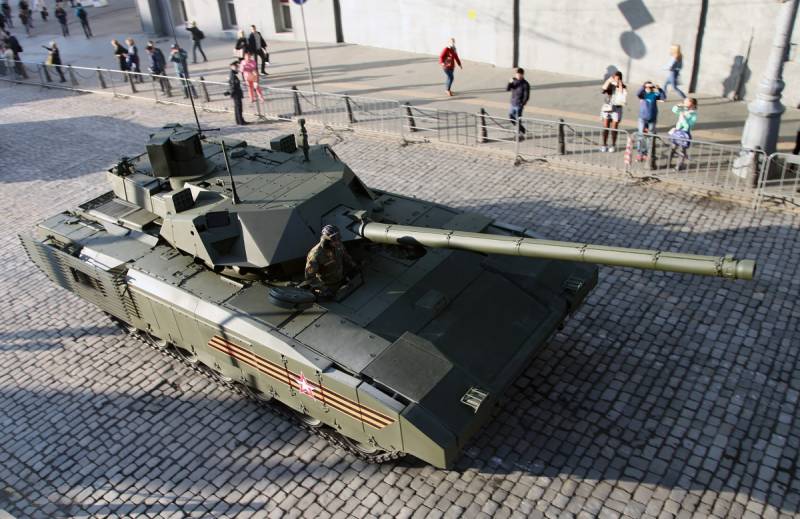 However, there are other unlikely scenarios. For example, in the late twenties, in the Kaliningrad region, an unintentional clash of different armies could occur. Its consequence will be a local conflict in which the newest tanks of the American and Russian armies will collide with each other.

The authors believe that by the mid-twenties, the basis for the fleet of armored vehicles in the United States would be tanks like M1A2 SEP v.4, upgraded in accordance with the promising project of General Dynamics Land Systems. From existing tanks in the version of SEP v.2 (already available in the army) and SEP v.3 (production began in the recent past) they will differ in improved means of detection, communication systems and enhanced protection. However, the M1A2 SEP v.4 tank will still be similar to the current Abrams.

The Russian ground forces, according to the editors of the publication, will use a mixed fleet of armored vehicles. It may include T-72B3М, T-80BVM and T-90М tanks. In addition, the army will have some new Armata T-14. The most formidable component of such a tank army, at least on paper, is the T-14 tank. It has advanced defenses and an uninhabited tower, and also shows high mobility characteristics.

According to the American edition, Captain Bühler noted the higher energy performance of the Russian tank. From the point of view of the specific pressure on the ground, the T-14 tank is similar to foreign combat vehicles. At the same time, it has a markedly higher power density. Thus, the Armata with the 48 t combat mass should be more maneuverable than the American Abrams tank or the German Leopard 2.

In terms of engine power, the T-14 tank is equal to the Abrams and Leopard-2. At the same time, it only weighs 48 t and therefore turns out to be 20% lighter than its competitors. S. Buhler indicates that the specific power of the “Armaty” is 31,3 HP. per tonne or 22,9 kW per tonne. In the considered foreign tanks, this parameter is at the level of the 24 HP. or 17,6 kW per ton. The Russian tank in the existing configuration uses tracks of smaller width than the M1A2 or Leopard 2. However, this is compensated by a low mass, and therefore the specific surface load of all three machines is approximately equal.

Based on all these data and estimates, S. Buhler makes an interesting conclusion. He assumes that the Russian tank T-14 "Armata" gives its crew more powerful protection than modern foreign models of armored vehicles. With all this, such a combat vehicle is noticeably lighter than its competitors.

With regard to detection tools and optical-electronic systems, then, according to S. Buhler, in this area the advantage will remain with American armored vehicles. The Russian industry is still lagging behind in this direction, and this affects the capabilities of technology. However, according to the expert, optical devices are still a problem for any tank. Modern optical-electronic means, as well as their optical predecessors, are still afraid of enemy fire and may receive mechanical damage. Despite all the progress, optics are the Achilles heel of any tank, including the T-14.

In the context of the uninhabited tower, another disadvantage of the promising Russian tank is mentioned. S. Bühler indicates that the commander of the Armata tank will not be able to look out of the hatch and look around, raising the so-called situational awareness. However, in practice this problem is solved with the help of modern technologies, namely, through video surveillance. Among experts there is a dispute on the topic of the real possibilities of video systems. There is a dispute over whether optical-electronic systems will be able to provide the same overview as traditional optical instruments.

To answer this question, Captain Buhler suggests recalling the successes. aviation industry. The pilot of the F-35 fighter has a helmet with a helmet-mounted display system. Receiving a signal from a plurality of cameras installed over the entire surface of the aircraft, the on-board computer creates a three-dimensional picture and displays an image corresponding to the pilot's direction of view on the helmet-mounted display. This technology was developed by the Israeli company ELBIT Systems and is called Iron Vision. If something like this will be used on the T-14 tank, then its commander will not only not have problems with visibility, but will be able to see much more than the tankers in a traditional inhabited tower.

The National Interest article does not end with the most original or unexpected conclusions. Its authors believe that the T-14 Armata and M1A2 SEP v.4 Abrams tanks have similar technical characteristics and combat qualities. As a result, none of these combat vehicles has a decisive advantage over a competitor. However, more sophisticated observation and detection tools available on the Abrams tank, as well as other military doctrine and, probably, more effective training of personnel may give the American army some advantage, even if not the greatest.

However, as foreign authors write, if war ever begins between Russia and the United States, “low-level” tactical issues will be far less of a problem than the risk of total nuclear mutual destruction.

Comparisons of another modernization of foreign tanks with the newest Russian model, built with the use of fundamentally new ideas, are no longer new, but still remain relevant and attract attention. How long it will last - we can only guess. It can be assumed that the current stage of comparisons will last exactly until the appearance of a new tank of Russian or foreign development. And again, the "rivals" of a completely new machine will be the upgraded samples of existing models.

It should be noted that the authors of The National Interest used a specific approach to the selection of "contestants". They decided to compare the existing T-14 tank with the modernized M1A2 SEP v.4, which is currently being prepared for delivery to the troops, which is still under development. Indeed, these machines may encounter on the battlefield in the late twenties, but in our time, such a comparison looks at least ambiguous.

Since the developers of the technology are not in a hurry to share the details of their projects, specialists and the public have to rely on various estimates, assumptions and forecasts. At the same time, certain features of the current situation are noticeable without additional information. All of them are reflected in the article “The T-14 Armata from a technical point of view” authored by Captain Stefan Bühler for Offiziere.ch, which the National Interest edited several times.

Completing his material, the Swiss officer reminds that all information about a promising Russian tank should be viewed critically. Despite this, it is obvious that the Russian defense industry, having received the necessary political support from the Kremlin, successfully implemented the concept of a tank with an uninhabited tower. Meanwhile, designers from foreign countries are engaged in desperate attempts to extend the life of armored vehicles, the development of which began in the seventies, due to limited innovations.

S. Buhler notes that the T-14 tank in its current form still has flaws and various “childhood diseases”. However, this situation has a characteristic detail. According to the most optimistic estimates, the West will be able to present the first prototype of its promising tank only for the next three to five years. By this time, the Russian specialists will have many years of practical experience gained with the help of “Almaty”. Even the perceived superiority of foreign industry will not allow reducing such a lag within a reasonable time.

Captain Buhler calls to recall history tank building. Russian experts have made a revolution in this area several times. However, they did this not because they had a completely new idea - but for the reason that they had the courage to take a step forward.

As the events of recent years show, Russia has again proved to be bold enough for the next step forward. She already has, at a minimum, experienced and pre-production tanks of a fundamentally new model, while the main foreign competitors are once again modernizing their old equipment. Of course, in the event of a collision between large countries and powerful armies, the conflict risks quickly moving into the stage of exchanging nuclear missile strikes, but such fears are not a sufficient reason for abandoning new armored vehicles. This means that the development of tanks will continue, and with it will continue attempts to compare different samples.