17 May 2018
43
Bomb attack on the Crimean bridge with the minimum number of casualties. It was advised to bring this plan to Kiev from America. Fortunately, not from the White House. 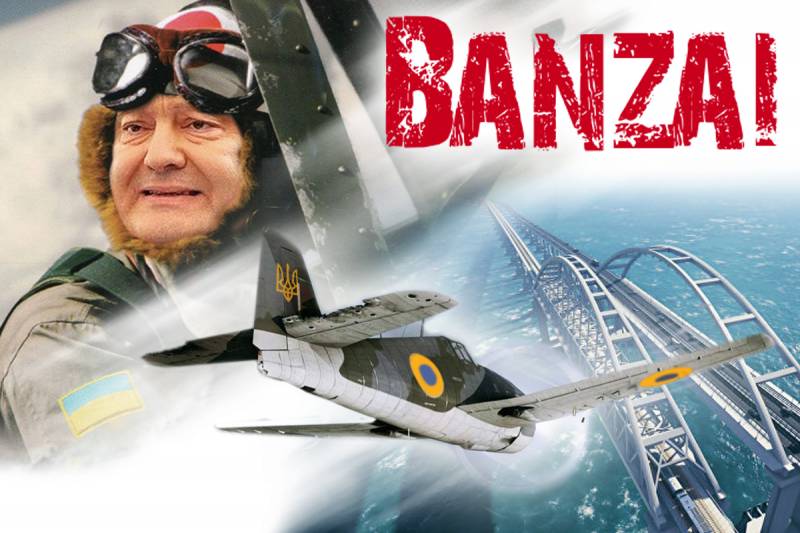 Russian bridge to the Crimea on the TV channel CNN called "a powerful symbol of the Putin era."

The 19-kilometer bridge, the longest in Europe, connected the Russian Krasnodar Territory with the Crimean peninsula, attached to Russia in the 2014 year. And his discovery marks the physical reunification of the Crimea with the Russian mainland, and at the same time serves as a symbol of Putin’s 18-year rule.

True, the correspondent Natan Hodge, this bridge is at the same time a symbol of "international isolation of Russia." Quote:

Russian intelligence services seized the Crimea by conducting a lightning-fast operation in February 2014. At first, the Kremlin denied that the soldiers in masks and camouflage without a single identification mark were Russian military, but later admitted that the so-called “little green men” were really from Russian divisions

Construction of the bridge, the author continues, began in February 2016 of the year. Later that year, the US Treasury applied a series of sanctions against the seven companies involved in construction. In fact, the sanctions were aimed at Putin’s closest associates, primarily the company controlled by Arkady Rotenberg, Putin’s childhood friend and his former judo partner.

The topic of the Crimean Bridge and the countering of the Russian "annexation" was developed and culminated in another American journalist, Tom Rogan, whose article was published in "Washington Examiner".

Note that it was published in the “Opinion” section and, therefore, cannot be a position of the editorial board. Nor can it be a new American plan for bombing opposition to Mr Putin and Rotenberg. However, no one can vouch for the soundness of the thinking of politicians in the White House and in Kiev.

Ukraine should “blow up the Crimean bridge of Putin,” advises Tom Rogan. And a bit of specifics: Ukraine needs to "destroy the elements of the bridge."

Yes, such a course of action will become an “escalation against Putin” and “will almost certainly cause retaliatory measures.” And yet "this bridge is an outrageous insult to the authority of Ukraine as a nation."

From the point of view of Putin, this bridge is “everything”. The bridge brought the Russian government "almost to bankruptcy" and cost the treasury "billions of dollars." And now he is the road to the Crimea, securing "the official physical and psychological appropriation of Ukrainian territory."

“Fortunately,” Mr. Rogan continues, “Ukraine has the means to launch air strikes on the bridge in order to render it unsuitable (at least temporarily) for use.”

The Ukrainian Air Force could “hit the bridge” so as to reduce the risk of casualties.

But how will Putin respond?

He will probably respond with an escalation in eastern Ukraine, the journalist suggests. But such an escalation is likely to “come true in any case in the next few months.” According to Rogan, Putin wants to “gradually absorb Ukraine”.

Therefore, airstrikes, even if they deactivate the bridge only for a while, will give Moscow an “unmistakable signal”: the Kremlin will be warned that Ukrainians do not want to accept the “formalization of Putin’s territorial theft”.

Bombing the bridge will also curb Putin’s ambitions and destroy his propaganda.

According to Rogan, the actions described above (attacks on the Crimean Bridge) are both obvious and urgent. For any state that allows "to lead away its territory" takes a "step towards extinction."

The publication of an American journalist in the Washington Examiner is “a complete absurdity for a sane person,” says Sergey Borozdin, head of Kerch.

“Definitely, this is not correct to write. Incorrectly - to put it mildly, ”he said. RBC. According to him, Mr. Rogan "is either simply inadequate, or a provocateur."

Borozdin reminded that both the bridge and the borders of Russia in general "are under such control and protection that it is physically impossible to do".

There is another review on the American material.

The publication was commented on by Valery Aksyonov, deputy of the State Council of Crimea. According to him, the services protecting the Crimean Bridge “work, not sleep.” “Calling for military action is the worst thing,” he said. “They tried to block the Crimea by electricity, by water, by other things, but these villains failed.”

So, experts do not believe in military opposition. But the peaceful opposition, more precisely, the information, is in full swing.

Victor Nebozhenko (Glavred, Ukraine) объявил The Crimean Bridge is a “symbol of eternal hostility between Russia and Ukraine,” and at the same time ridiculed Putin’s “successes”.

Russia under Putin’s eternal and wise leadership stubbornly shrivels and loosens. Judge for yourself. As a result of his wise policy, instead of controlling Berlin and Prague, Russia in the 21 century "courageously" fights for control of Donetsk and Lugansk. Moreover, for the second time in 250 years, Russia is once again taking possession of the Crimea and is terribly proud of this “achievement”.

According to the analyst, the Crimean bridge built is Moscow’s recognition of the fact: Russia’s “land corridor” to the Crimea “will never be.” The Crimea is becoming the “rocket-nuclear aircraft carrier of Russia”, but it has no place to sail for it. “Turkey and NATO are ahead, and Ukraine and the United States are offended and hostile behind,” the author explains.

But this is journalism. Officially, apparently, Ukraine will initiate a lawsuit against Russia. Foundation: illegal construction of the Crimean bridge. Such a claim is already being prepared by the Ministry of Environment in Kiev.

According to UNIAN, the Ministry of Ecology and Natural Resources of Ukraine studying materials for filing an international claim against the Russian Federation over the construction of the Kerch (Crimea) bridge. This was written on Facebook by Minister Ostap Semerak, who called the bridge “damned”:

Experts of the Ministry of Environment are already studying all the materials for the next international lawsuit against Russia for the construction of this damned bridge.

By the way, Mr. Semerak made it clear that he personally does not support the calls of other hot guys who are calling on social networks to let Ukrainian people cross the new bridge Tanks.

I do not want tanks. I want a new future for Ukraine, in which there will be no crazy neighbors.

Earlier, we recall, the opening of the bridge was condemned by the Ukrainian president, Petro Poroshenko. Poroshenko tried to be ironic, saying that the invaders would need this bridge when they leave the Crimea.

However, Poroshenko and his departments are now not up to the suit and not to the international courts.

Already fifty-one deputy of the Verkhovna Rada of Ukraine has signed the statement, allowing to initiate the procedure of impeachment against Poroshenko. This was reported by the people's deputy Yuri Derevyanko in his "Facebook".

Will the opposition get the required 226 votes to start the impeachment? Derevianko himself is full of optimism: "I am convinced that we have every chance in the near future to get the 226 required signatures!"

In any case, the impeachment plan itself is more evidence that the imperious throne in Ukraine is tottering.

But the Crimean bridge stands firmly.

Ctrl Enter
Noticed oshЫbku Highlight text and press. Ctrl + Enter
We are
Russia, Turkey and the "Crimean Question"Situational analysis of the death of the MH17 flight (Malaysian Boeing 777), made on the basis of engineering analysis from 15.08.2014
Military Reviewin Yandex News
Military Reviewin Google News
43 comments
Information
Dear reader, to leave comments on the publication, you must sign in.