"Tsushima 2.0" just around the corner?

17 May 2018
154
It so happened that over the past decades, the Pacific Fleet of Russia found itself in a kind of shadow of two other fleets: the Northern and the Black Sea. In many ways, this was objective: it was further from the main “hot spots”, to which Moscow’s attention had been riveted all this time, and did not experience such dramatic events as the annexation of the Crimea with the subsequent active build-up of forces and means in this direction. 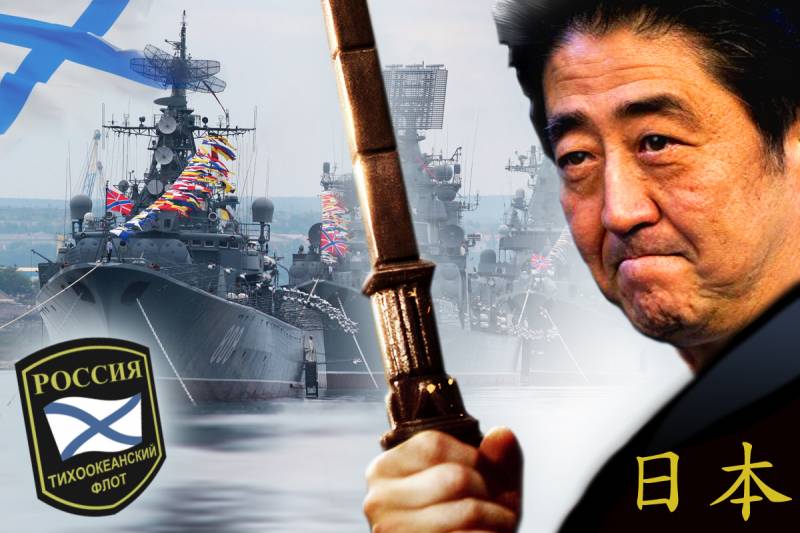 But, despite all this, the Pacific Fleet still remains the most important component of our military power at the Far Eastern border of Russia and throughout the Asia-Pacific region. His own area of ​​responsibility is comparable in size to the areas of direct responsibility of the other three fleets combined. And the presence of several states in the region at once, whose economy feels much more prosperous than the Russian, and investing very serious means and efforts in improving its naval forces, does not leave us any chance of any kindliness.

The current state of affairs in the Pacific navy it is completely inconsistent with the role that we are supposed to play in the region. The fleet of Japan is actively growing and improving. South Korea is not far behind her. Both of these states have such a serious advantage as access to American technology, coupled with their own economic power.

For example, both of these states already are armed destroyers with command and control systems "Aegis". In Japan, they are destroyers of the type "Atago" and "Congo" (only six ships at the moment), and in South Korea - the "Sejong the Great". There are plans to increase the number of such ships, in particular, because of the North Korean missile threat, and also, although it is not directly voiced, because of the rapidly growing power of the Chinese Navy.

Our neighbors are seriously investing in the development of the submarine fleet. It is also necessary to note the high technological level of Japanese and South Korean non-nuclear submarines. The “Soryu” type Japanese submarines are already considered to be among the best in the world: they are low noise, have an auxiliary air-independent power plant (Stirling engine), and are equipped with modern weapons. At the moment, there are nine such submarines in the Japanese Navy, the tenth is on the stocks. And starting from the eleventh, the boats will be equipped with modern lithium-ion batteries instead of the Stirling VNEU, which will not only increase the resource of their diving, but also significantly increase their underwater speed in a combat situation, without losing stealth.

Our South Korean neighbors are not far behind the Japanese. They already have seven “Hon Bom Do” submarines built according to the German 214 project. Submarines of this type have an air-independent electrochemical power plant, which allows them to develop up to 20 nodes under water. Armed boats, in addition to the torpedo, and more missile weapons, including cruise missiles. In addition to the existing ones, two more submarines of this type are currently being completed.

And they are already being replaced by the boats of the Chang Bogo III national development (KSS-3), which have a displacement of 3, 000 tons, and are armed, including Henm-3 cruise missiles. There is also information that later versions of these submarines can be equipped with medium-range ballistic missiles.

Probably, there is no special need to mention the fact that the Chinese Navy is developing quite actively. The recent appearance of a second aircraft carrier in its structure, this time of its own construction, is best confirmed by the idea that this regional (so far!) Player pays great attention to the development of his fleet, not sparing either funds or efforts in the field of scientific and technical developments.

And what can we answer? Alas, if you do not hide your head in the sand, then there is little.

The combat structure of the Pacific Fleet currently has 67 combat units. Of these, 56 overcame 25-year service life and, often, only with great stretch can be called combat-ready. Some of the ships, formally still listed in the fleet's combat strength, are in fact simply waiting for recycling at the quay walls.

Probably, the situation could be corrected by active modernization of the combat vessels. But let's be frank here too: because of a number of both objective and subjective problems, our shipbuilding industry is now in a very sad state. The rearmament program before 2020 of the year in terms of meeting the needs of the Navy is in fact disrupted, with the exception of the absolutely priority direction of construction and modernization of strategic submarines.

The replenishment expected on the Pacific Fleet in the coming years is also not very large. A few corvettes, four small rocket ships, a series of six diesel-electric submarines - this is what can be expected with a high degree of probability on our Pacific coast by the 2027 year. Unless, of course, the next rearmament program will be frustrated. Yes, there is an important nuance: all these ships are planned to be equipped with modern rocket armament, in particular, the Kaliningrad and Onyx cruise missiles. But against the background of the general state of affairs in the fleet, including in the field of missile weapons, this will not make the weather. Rather, we are simply closer to the capabilities of forward departed neighbors, but no more.

The situation could be changed by large surface ships, but the prospects for their appearance in the composition of the Pacific Fleet are rather vague. The project of the destroyer “Leader”, as it is known, has not yet reached the level of at least finished “in paper”, at the level of drawings and design and estimate documentation. About aircraft carriers, or at least missile cruisers, isn’t at all, such if it’s planned, it’s obviously not in the next decade and not in the Pacific Fleet. Although we have a need for large surface ships in this region: all our destroyers (including BOD here) have earned honest 25 years, and there are not so many opportunities for their modernization. The same applies to the only Pacific missile cruiser.

It turns out that the only thing in which we surpass at least our neighbors (with the exception of the United States, it is also a neighbor) is strategic and multi-purpose nuclear submarines. That, on the one hand, is logical, but on the other hand, it would seem to more than cover all the possibilities of any foreign fleet in the region.

But we all understand, of course, that nuclear submarines, especially equipped with sea-based strategic ballistic missiles, are weapon retaliation global war, not a means to suppress the enemy combat conflict low and medium intensity. And by betting solely on them, we find ourselves in a deliberately losing position. The situation in which we secured our borders, but could neither help our allies, nor ensure the safety of our own sea communications, is in principle unacceptable for a state that actively protects its geopolitical interests. Namely, in this situation, we now find ourselves.

You should also remember that the SSBN and SSGN themselves in need of support. We are almost unable to “squeeze out” foreign submarines from the waters directly adjacent to the bases of our “strategists” in Kamchatka, and in the foreseeable future the situation in these areas may worsen even more. We will soon have simply nothing to search for American submarine “hunters”, or there will be so little power that we simply cannot even speak about the quality control of the reference zones during the period of danger.

Do not forget that our nearest neighbor, Japan has territorial claims to Russia. It is clear that the Japanese are unlikely to rush to seize our Kuriles. But let's imagine for a moment that they were able to covertly develop nuclear ammunition. In general, there is nothing incredible about this: even Israel, which does not have even one-tenth of the Japanese industrial and technological potential, could do it. And if this happens, how will the situation in the region change?

And it is enough just to predict. In conditions when the use of nuclear weapons by one of the parties becomes impossible due to the threat of a counter-strike, the superiority factor in conventional, non-nuclear weapons will take the first role. And here the Japanese have excellent positions: a fleet of a hundred pennants, well balanced and technically perfect. Enough powerful air force, which is just now being equipped with the latest American F-35. The proximity of our own military bases against our eternal logistical mayhem.

Therefore, if at one not the most beautiful moment we suddenly find out that Japan has become a nuclear power, it will be too late to “drink Borjomi”: The Kuriles will instantly fall off, and it is good, if only the South. And we can only prevent with the risk of getting another “Tsushima”, which cannot be taken: in the case of a major military defeat, we will definitely lose both the entire Kuril ridge and half of Sakhalin in addition ...

It is clear that the voiced scenario is not currently a high priority. But, as practice shows, it is foolish to hope for gentlemanly behavior of geopolitical competitors: alas, international treaties are observed only as long as it is beneficial for both parties.

Therefore, the future reduction of the military budget of the Russian Federation looks rather doubtful. And from the eastern frontiers of Russia - and completely stupid ...

Ctrl Enter
Noticed oshЫbku Highlight text and press. Ctrl + Enter
We are
The tragedy of the American army ("The Atlantic", USA)Results of the week. "God forbid to see Russian revolt, senseless and merciless!"
Military Reviewin Yandex News
Military Reviewin Google News
154 comments
Information
Dear reader, to leave comments on the publication, you must sign in.