Rise of the Czechoslovakia. How did the Civil War in Russia

18 May 2018
44
17 May 1918, exactly 100 years ago, the uprising of the Czechoslovak Corps began in Russia, from which many historians count the beginning of the Civil War. Thanks to the rebellion of the Czechoslovak Corps, which engulfed a large part of the Volga region, the Urals, Siberia and the Far East, Soviet authorities were eliminated over vast territories and anti-Soviet governments were created. It was the performance of the Czechoslovakia that became the starting point for the start of large-scale hostilities of the “white” against the Soviet power.


History The Czechoslovak Corps is inextricably linked with the First World War. In the autumn of 1917, the command of the Russian army decided to create a special corps of Czech and Slovak prisoners of war who formerly served as part of the Austro-Hungarian army, were captured in Russia, and now, considering their Slavic affiliation, expressed their desire to fight against Germany and Austria-Hungary in the Russian troops. 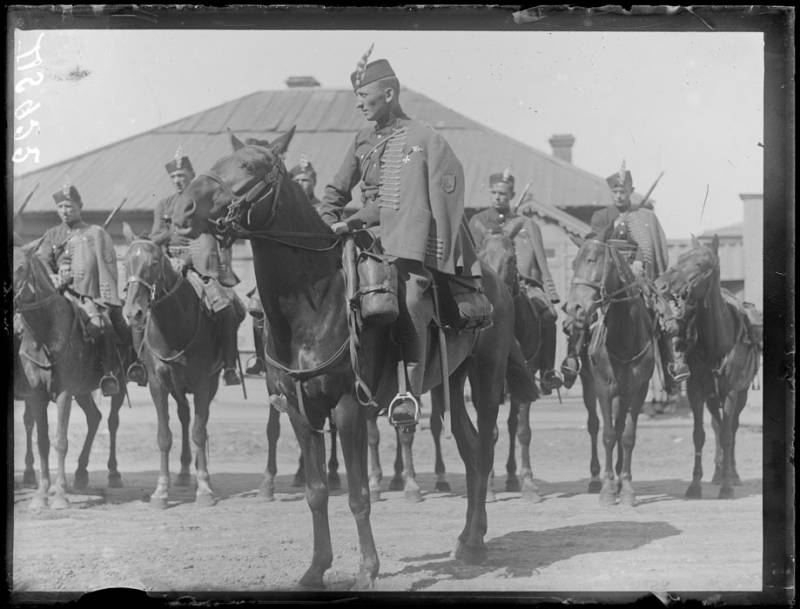 By the way, Czech and Slovak volunteer formations, which were recruited from among the Czechs and Slovaks who lived in the territory of the Russian Empire, appeared in 1914, when the Czech squad was created in Kiev, but they operated under the command of Russian officers. In March 1915, the Supreme Commander, Grand Duke Nikolai Nikolayevich, allowed to take into the ranks of the Czechoslovak formations of Czechs and Slovaks from among the prisoners of war and defectors of the Austro-Hungarian army. At the end of 1915, the First Czechoslovak Rifle Regiment named after Jan Hus, numbering 2100 soldiers, and by the end of 1916, the regiment was transformed into a brigade numbering 3500 soldiers. The commander of the brigade was Colonel Vyacheslav Platonovich Troyanov, who was given the rank of Major General in June 1917.

26 September 1917, the Chief of Staff of the General Headquarters of General Headquarters Lieutenant-General Nikolai Dukhonin signed an order to form a separate Czechoslovak corps, which included both Czechoslovak divisions with a total of 39 thousands of soldiers and officers. Although the main part of the corps’s servicemen were Czechs and Slovaks, as well as the Yugoslavs, Russian became the command language of the corps. Major-General Vyacheslav Nikolaevich Shokorov was appointed commander of the Czechoslovak Corps, and Major General Mikhail Diterikhs was appointed Chief of Staff.

By the time of the October Revolution in Russia, units and subunits of the Czechoslovak Corps were located in the Volyn and Poltava provinces. When the corps command received news of the victory of the Bolsheviks and the overthrow of the Provisional Government, it expressed support for the Provisional Government and advocated the further continuation of hostilities against Germany and Austria-Hungary. Such a position was in the interests of the Entente, which controlled the Czechoslovak National Council in Paris. From the very first days of the October Revolution, the Czechoslovak Corps took an unequivocal position against the Bolsheviks. Already on October 28 (November 10), units of the Czechoslovak Corps took part in street battles in Kiev, where the junkers of military schools opposed the local Red Guard detachments. 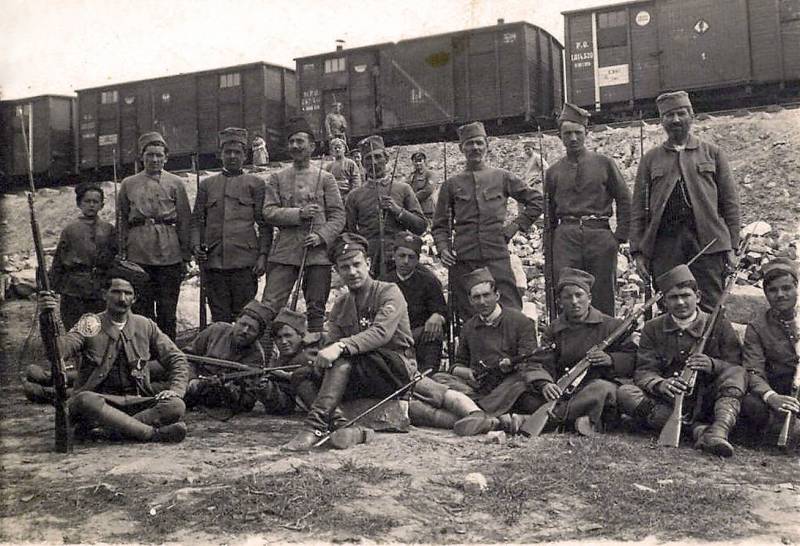 Tomas Masaryk even went to the resolution of Bolshevik agitation in the Czechoslovak units, as a result of which Czechoslovak soldiers and officers joined the BNS about 200. At the same time, Masaryk refused cooperation offers from Generals Lavr Kornilov and Mikhail Alekseev. Gradually, Russian officers were removed from the main command posts in the Czechoslovak Corps, and Czechoslovak officers took their places, including those who sympathized with left-wing political ideas.

16 May 1918 in Chelyabinsk began the congress of Czechoslovak military personnel, which lasted four days. At the congress, it was decided to break with the Bolsheviks, to stop the surrender weapons Soviet authorities and follow their own order in Vladivostok. Meanwhile, on May 21, the Soviet government decided to completely disarm the Czechoslovak units, and on May 25 the relevant order was issued by the people's commissar for military and naval affairs Leo Trotsky. However, in Maryanovka, Irkutsk and Zlatoust, where the Red Guards tried to disarm the Czechoslovak units, the latter put up strong resistance. The Czechoslovak Corps took control of the entire Siberian road. 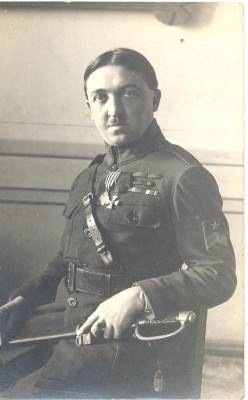 At the congress, a provisional executive committee of the congress of the Czechoslovak army was formed. It consisted of the chiefs of three echelons. Lieutenant Stanislav Chechek (1886-1930), an accountant by profession, at the time of the outbreak of the First World War, worked in the representative office of Skoda in Moscow. He volunteered to join the Czech squad, participated in the war, commanding a company, and then a battalion. 6 September 1917 of the Chechek was appointed deputy commander of the 4 Infantry Regiment named after Prokop Naked. In May 1918, he headed the largest group of troops of the Czechoslovak Corps - Penza.

Captain Radol Gaida (1892-1948), a pharmacist by profession, passed military service in the mountain rifle regiment of the Austro-Hungarian army, then married an Albanian and settled in Shkoder. When World War I began, he was again called into the Austro-Hungarian army, but in 1915, Gaida surrendered and joined the Montenegrin army, and in 1916 he arrived in Russia and served as a doctor in the Serbian regiment, then in the Czechoslovak brigade. 26 March 1917, Gaida was appointed commander of the company of the 2 Czechoslovak Infantry Regiment. In the spring of 1918, he led all Czechoslovak troops stationed east of Omsk.

Lieutenant Colonel Sergei Voitsekhovsky, a native of the nobles of the Vitebsk province, served in the Russian army since 1902, graduated from the Konstantinovsky Artillery School and the Nikolaev Military Academy of the General Staff. 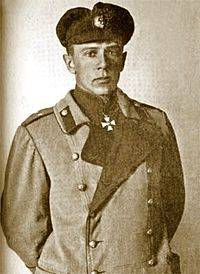 In January 1917, he was appointed Chief of Staff of 176-th Infantry Division, in February - Operations Chief of Staff 3-th Caucasus Grenadier Division, and then served as chief of staff 126-th Infantry Division, from August 1917 years actually served as chief of staff 1-th Czechoslovak division of the Russian army. In February 1918, he became the commander of the 3-th Czechoslovak behalf of Jan ижižka Rifle Regiment, and in May 1918 was appointed senior military commander of the Czechoslovak troops in the Chelyabinsk region. Under his command, on the night of 26 on 27 of May 1918, part of the 2 and 3 of the Czechoslovak infantry regiments without loss established control over Chelyabinsk. In June 1918, Wojciechowski was promoted to colonel and led the Western Group of Forces, which included the 2 and 3 Czechoslovak infantry regiments and the Kurgan Marching Battalion. Czechoslovak troops under the command of Colonel Wojciechowski occupied Troitsk, Zlatoust, and then Yekaterinburg.

Since the beginning of the uprising of the Czechoslovak Corps, its units and subdivisions no longer submitted to the Czechoslovak National Council in Moscow and did not comply with the order of Tomas Masaryk about surrendering weapons. By this time, the Czechoslovakians had already considered the Bolshevik government as potential allies of Germany and were going to continue the war with Germany and Austria-Hungary in alliance with the anti-Bolshevik Russian formations. It was under the control of the Czechoslovak troops that the formation of alternative to the Soviets authorities in those cities controlled by units of the Czechoslovak Corps began. Thus, in Samara, the Committee of members of the constituent assembly (Komuch) was organized on June 8, and the Provisional Siberian Government was established on June 23 in Omsk. The People’s Army of Komuch was created, whose chief of staff was Colonel Nikolai Galkin. The Independent Infantry Brigade of Lieutenant Colonel Vladimir Kappel became the most reliable part of the People’s Army of Komuch.

Given the complexity of the situation at that time, it is not possible to evaluate the actions of the Czechoslovaks unequivocally. But it must be recognized that the uprising of the Czechoslovak Corps played a very important role in the history of revolutionary Russia, becoming one of the key impulses for the beginning of the Civil War in the country.