Hindi Russia will be bhai bhai for a long time

17 May 2018
19
The potential of Russian-Indian defense cooperation is much more impressive and fundamental than some people think. 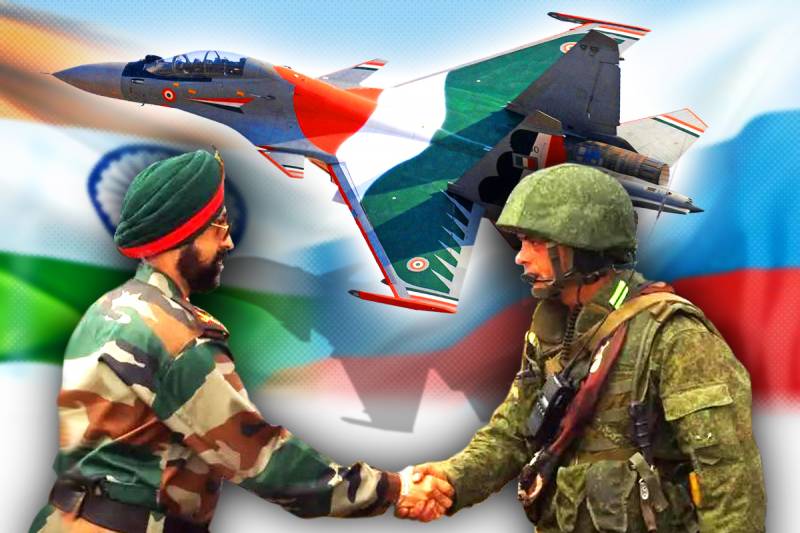 It’s customary to say about dishonest elections: “It doesn’t matter how they vote, it’s important, they calculate it!” With regard to the working methods of a certain part of the nominally Russian press, this can be rephrased as follows: ".

For example, the largest Indian publication, The Times of India, published material on the problems of Russian-Indian military-technical cooperation. Probably well aware of the importance of this topic for their country and their own responsibility, Indian journalists suggested to their article the most correct and loyal to Moscow title: “India and Russia are working on a roadmap to circumvent new US sanctions". Thus emphasizing the constructive nature of the relations between the two countries, which are seeking to jointly overcome the difficulties that have arisen due to the fault of a third party.

However, this publication was presented to the Russian audience under a completely different, much less benevolent to the Russian Federation heading: “India explained the refusal of the Russian weapons in favor of the American».

The article The Times of India focused on analyzing the situation caused by American sanctions against Russia, which, to put it mildly, in India unhappy:

The Indian Defense Ministry is very concerned about the actions of the US State Department on 6 of April of this year, which are directed against 39 of Russian subjects of military-economic cooperation with India, including the state-controlled arms exporter Rosoboronexport, with which India conducts regular business. According to the decision of the US authorities, any third party that conducts "significant operations" with these 39 organizations may be subject to punitive sanctions within the framework of US sanctions law CAATSA

To say that the Hindus don't like this American raid is like saying nothing. Because Russia has been India’s largest and key defense partner for many decades. And the armed forces of this country are currently equipped with Soviet and Russian weapons for at least 70%. In other words, if these US sanctions are launched at full strength, they will be the strongest blow to the defense capability of India, up to its complete paralysis. That is why in New Delhi they are paying great attention to this issue and are taking all necessary measures, including with Russia, to minimize the consequences of Washington’s dangerous policies.

In the Russian translation, there are a few obscure lines from all this, really important and main thing.

And the rest of the place was allotted to the next “all-European” story about what Russia is bad and how it prevents India from “entering the high road of progress”.

India is actively cooperating with the United States in the supply of armaments because of the difficulties that exist in the military-technical partnership with Russia, sources in the Indian government told The Times of India.
India deliberately diversified its arms imports due to Russia's tendency not to adhere to delivery schedules, increase costs in the process of fulfilling the contract, hinder technology transfer and not reliably supply spare parts, ”the newspaper writes.

The article The Times of India really has such a passage. And it would be strange to think that in this huge country there are no military and civilian officials who are ready, including for personal interests, to lobby for the commercial offers of generous American military concerns to unofficial fees. Which are just now actively breaking into the Indian market. And who really do not like the presence of such a powerful competitor there, as Russia. 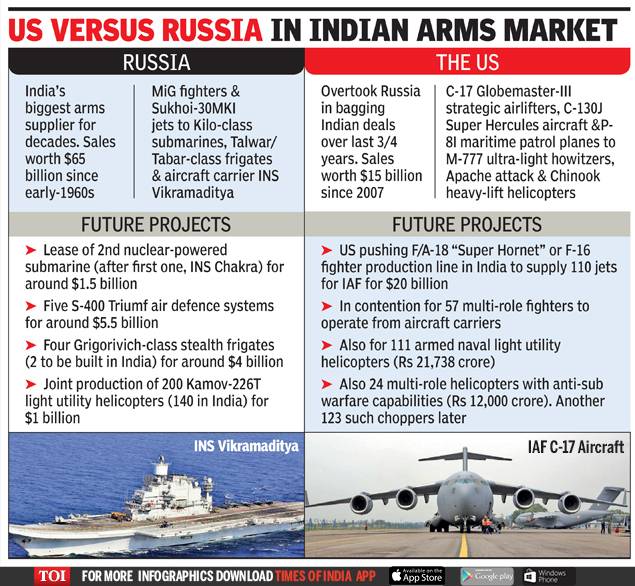 It is curious, however, that even this clearly anti-Russian attack by an Indian newspaper was honestly attributed to certain unnamed sources in the Indian Defense Ministry. In other words, this point of view, although it exists, is not the official, openly declared position of the military-political leadership of this country.

This is not surprising, since such claims to such a historic partner of India as Russia will not be put forward at the official level. Firstly, in any large case, overlays are possible, which are decided in working order. And by the way, the USA is not insured in the same way as the Russian Federation.

As for specifics, a bright case of “failure of the delivery schedule” can be considered a delay of a year of commissioning of the aircraft carrier Vikramaditya. Which took place because, at the request of the Indians, the thermal insulation of its boilers was made of low-quality Chinese refractory bricks, against which the Russian side strongly objected. As a result, this Indian "know-how" led to the failure of steam boilers and the annual delay in the delivery of the ship.

No less “charismatic” is the claim about “obstruction of technology transfer”. At times, Indian partners really lose their sense of reality and understanding of the limits of the possible. A classic case of this kind was their wish to obtain from Russia the newest nuclear submarine of the 885 "Ash" project even before the Russian Navy receives such a submarine. And, of course, along with all top-secret technologies. It is clear that in this case the Indians received a hard rejection.

But, I repeat once again, no one will officially voice such claims, because they are ridiculous. The global practice boils down precisely to the fact that the leading powers, owners of the most advanced military technologies, almost never share them with their foreign partners. It is for this reason that the United States has never offered India, for example, its latest nuclear submarines. And they certainly will not be offered. And in the area aviation they are just now trying to break into the Indian market with the F / A-18 Hornet fighter designed in the 70s of the last century!

However, in this case, the reason is not only in the secrecy of the technology of the newest American fighter "stealth" F-35, but also in their utter, especially in terms of India, price. This is the second, and by importance the first reason why the claims to Russia on the part of the imaginary "high cost" of its military products are absolutely groundless. All American military good, by definition, and at least two to three times more expensive than the Russian.

And by the way, in India it is well understood. Therefore, even in thought, they do not allow a complete reorientation to military cooperation with the United States in the foreseeable future. Otherwise, making a major bet on the military business with America, the Indians will simply go bankrupt and remain at the bottom of the trough. The US military monopolies are not inclined to take into account the financial capabilities of their clients and even the political interests of their own state. And they put such "prices" on their goods, from which even the Saudi princes catch their breath. The Poles, for example, have recently fallen into a natural stupor when they learned that the United States valued the sale of two divisions of the Patriot air defense missile system to 10 billion dollars. That is about 10 times more expensive than the same number of Russian air defense systems C-400.

It is also clear why The Times of India confined itself to such an anonymous and frankly crooked interpretation of Indian-Russian military-industrial disagreements. The Hindus, in fact, will not be writing in plain text that it’s not at all in some trade and technical details, but in the fact that the big geopolitics are pushing New Delhi to cooperate more closely with Washington on the basis of their mutual hostility towards China . With which Russia, on the contrary, maintains very close and almost allied relations. Such things are implied and fully taken into account in real politics, but no one, of course, will bring them to the public, especially in a practically official publication.

Good, however, is the Russian press, which, as they say, "sounded the bell, without looking at the holy calendar." And again she put her country in the most unseemly light without any serious reason. But Kozma Prutkov also bequeathed: "Behold the root!"

Ctrl Enter
Noticed oshЫbku Highlight text and press. Ctrl + Enter
We are
The tragedy of the American army ("The Atlantic", USA)Situational analysis of the death of the MH17 flight (Malaysian Boeing 777), made on the basis of engineering analysis from 15.08.2014
Military Reviewin Yandex News
Military Reviewin Google News
19 comments
Information
Dear reader, to leave comments on the publication, you must sign in.