The smell of the boiler ... VSUshniki in Chigiri were completely blocked

16 May 2018
110
The servicemen of the Ukrainian Armed Forces, who recently tried to break through in the area of ​​Gorlovka, were blocked by the Armed Forces of the DPR near Chigari, which the Kiev command so much praised. 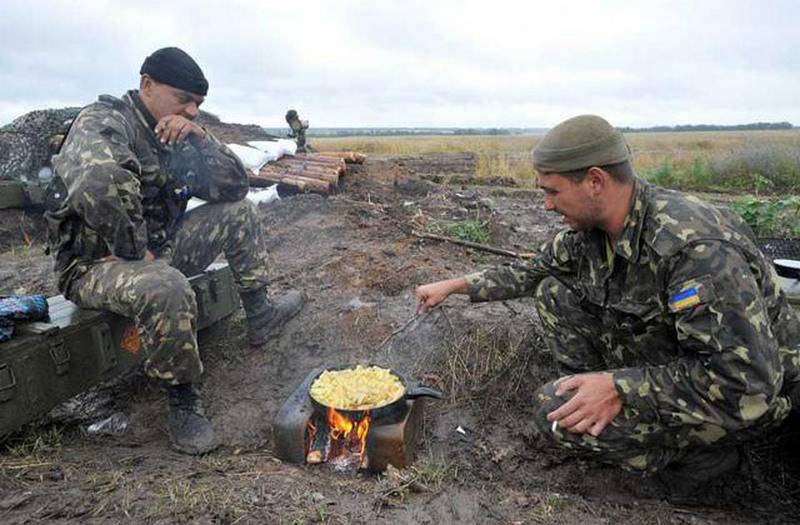 Soldiers are in a difficult situation, according to the commander of the 24 brigade of the APU Gutz. The reason for this - the complete absence of ammunition, weapons, food and medicine. They cannot leave Chygari themselves, since all the commanding heights are occupied by the military personnel of the Armed Forces of the DPR. The brigade commander requires the Kiev command to pull the fighters from the position.

However, in Kiev, they do not react to regular requests from their own fighters: the commander of the so-called “OOS”, General Naev, continues to report to Poroshenko on a successfully planned and conducted operation.

According to one of the Ukrainian servicemen, the command of the “Combined Force Operation” ordered a foothold near the village of Chigari, but it turned out that there was no place to dig in because the area was marsh.

Here, literally, at a distance of a rifle shot weapons there are separs, theirs "eyes". Any little boy they get us
- the serviceman complains.

VSU ask for evacuation, because they cannot leave the occupied territory on their own - they are surrounded by Donbas resistance forces.

Since the capture of the village of Chigari, they have already consumed ammunition, weapons, food and medicine. They cannot leave the settlement themselves, since all the dominant heights are occupied by the military personnel of the Armed Forces of the DPR
- informs the rapid response team.

Recall, a few days ago, the Ukrainian security forces attempted to improve their positions in the Gorlovka direction. However, the forces of the Donbass unit repulsed the security forces, who had lost 9 people killed and 5 wounded. The environmental protection forces had to retreat, while losing one of their dominant heights to the south of the suburban village of Chigari.

Ctrl Enter
Noticed oshЫbku Highlight text and press. Ctrl + Enter
We are
Summary of the week from voenkor Mag about events in the DNI and LC 21.04.18 - 27.04.18Weekly summary (30 January-5 February) on the military and social situation in the DPR from the military officer "Mag"
Military Reviewin Yandex News
Military Reviewin Google News
110 comments
Information
Dear reader, to leave comments on the publication, you must sign in.