16 May 2018
43
The International Space Station (ISS) can be equipped with a laser system for the destruction of small space debris, reports RIA News a message from the chairman of the expert group of the Council on Space Threats, Corresponding Member of the RAS Boris Shustov. 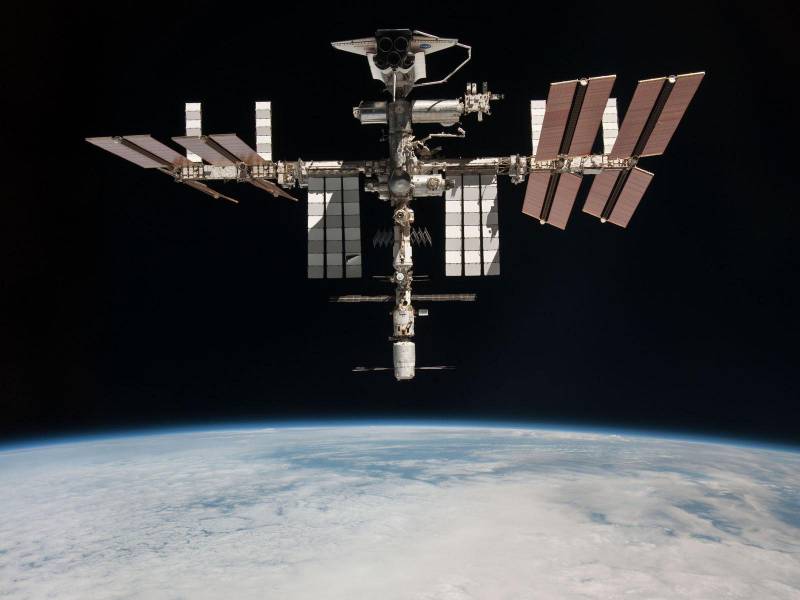 Now, to protect the ISS from space debris, evasive maneuvers are carried out using the engines of the station itself or cargo ships docked to it.

At the celebration of the 60 anniversary of the first satellite at the Space Research Institute a meeting of the working group was held, at which scientists from Italy, France, Japan and Russia agreed that international cooperation would be formed. All of them will think about using orbital lasers placed on the ISS in order to avoid collision with small, several centimeters, but the most numerous and therefore most dangerous fragments of space debris,
Shustov said at a meeting of the RAS Council on Space.

In turn, President of the Russian Academy of Sciences Alexander Sergeev noted that the issue of using lasers to clean the debris from space debris has been discussed for a long time.

Recently, it has been very popular to discuss the use of lasers operating from space to reject debris elements into orbits of their information into the atmosphere. Now in Japan and Europe, projects for creating such installations are being seriously discussed. The parameters of lasers, which are now available, both in terms of average power and peak power, are sufficient for solving the problem of changing the orbit of small space debris elements of 10 centimeters or less in size,
told Sergeev.

It is noted that the development of Russian scientists will reduce the size and technological complexity of the orbital laser.

According to Oleg Palashov, head of the department at the Institute of Applied Physics of the Russian Academy of Sciences, the idea was owned by specialists from Japan who submitted their project as early as 2015: “They proposed using three ready-made and currently developed solutions: for high-power accelerators of the next generation Xcan and a telescope for studying the effects of JEM-EUSO cosmic rays on the atmosphere with a mirror with a diameter of 2,5 meter. " In the original design, the laser was supposed to concentrate energy from 10 of thousands of optical fiber channels.

We suggested to colleagues to reduce the number of channels from 10 thousands to 100 by using instead of fiber so-called thin rods, which are being developed at our Institute. By itself, this project is new. Only the possibility of creating such a laser and the potential of placing it on a spacecraft are considered, and the interface, how to control this kind of radiation, is the next question
noted Palashov.

He also said that the work of the designed laser at full power would require as much electricity as the entire ISS generates.

Realizing that it is impossible to de-energize the station, the specialists are working on a project that will consume only 5% of the available energy. This will limit the duration of a shot of 10 seconds, and 200 seconds will go to recharge. The firing range will be up to 10 kilometers. The weight of the equipment will be about 500 kilograms, and the volume - 1-2 cubic meters,
said the scientist.

It is assumed that as a result of exposure of the laser to space debris, it will evaporate, turning into a cloud of metal particles, but "their size will not pose a threat to the ISS shell and spacecraft equipment."

Ctrl Enter
Noticed oshЫbku Highlight text and press. Ctrl + Enter
We are
The head of Roscosmos: Russia will build its orbital station after the ISS
Military Reviewin Yandex News
Military Reviewin Google News
43 comments
Information
Dear reader, to leave comments on the publication, you must sign in.