Minesweepers for the 12700 Alexandrite project and their capabilities

17 May 2018
12
25 on April 2018, the ceremony of launching the next basic minesweeper of the 12700 project, Alexandrite, took place. The minesweeper was designed by the Almaz Central Maritime Design Bureau for the Russian Navy and belongs to a new generation of mine defense ships. The ship is designed to search and destroy sea mines in the waters of naval bases on a safe distance for the ship.


The head minesweeper "Alexander Obukhov", which was launched on 27 on June 2014 of the year and was commissioned on 9 of December on 2016, fully confirmed all the tactical and technical characteristics of the project. The deputy commander-in-chief of the Russian Navy for armaments, Vice Admiral Viktor Bursuk, who was present at the launching ceremony of the third minesweeper of this type (second serial) “Ivan Antonov”, told journalists about this. The first serial ship "George Kurbatov" was laid 24 April 2015, but in June 2016, suffered from a fire, the ship is still under construction, approximately it will be launched in 2019 year.

In total, 10 ships of Project 12700 were contracted for the needs of the Russian Navy, instead of the originally planned 8 ships, while the commissioning date for the last minesweeper of the series was shifted to 2027. According to Viktor Bursuk, minesweepers of the Alexandrite type will be present at all fleets... The lead ship "Alexander Obukhov" is currently serving in the Baltic Fleet, and the second ship, "Ivan Antonov", built and launched, will become part of the Russian Black Sea Fleet. Tests of "Ivan Antonov" are scheduled to begin in the fall of 2018. 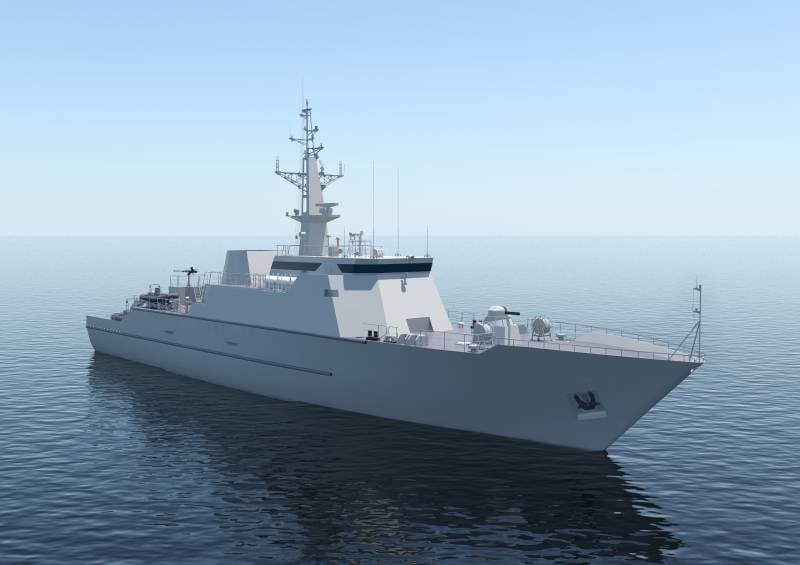 Base minesweeper project 12700, render TsMKB "Almaz"
The fiberglass hull of the new ship, invisible to magnetic fuses of sea mines, a modern mine control system and high maneuverability make the 12700 project minesweepers strategically important ships for the Russian fleet. The basic minesweepers of this project can be used both to clear safe corridors in minefields and to search for single drifting sea mines that impede navigation.

Minesweeper is designed to detect and destroy mines of all types; mine protection bases, coastal marine areas; ensuring mine protection of ships of the fleet at the sea crossing, its own exclusive economic zone and mineral deposits at sea; setting minefields; mine reconnaissance. During periods of low probability of mine threat, the 12700 project minesweepers can be used both for the protection of a given water area and for training purposes.

In the base minesweepers of the 12700 project, the designers of the St. Petersburg enterprise TsMKB "Almaz" managed to combine a fairly large number of non-standard engineering solutions, much of this class was used for the first time. For example, in addition to the two adjustable-pitch propellers, the minesweeper received two bow thrusters, the PU-100F and two fodder retractable rotary columns VPK-90F / 70. Due to this, the ship received maneuverability comparable to the maneuverability of the tug. For the minesweeper of the coastal zone, this is a fairly valuable quality that allows the ship to be used effectively even in narrow straits, between shoals, on the fairways. Two diesel engines with power 2500 hp each provide the warship with a maximum speed of 16 knots. The sailing range in an economical course is 1500 nautical miles, the autonomy of navigation is 10 days. 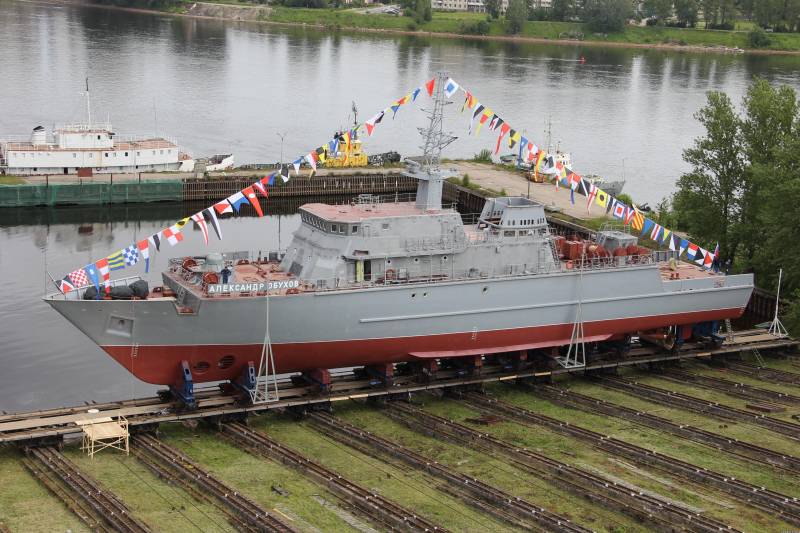 Launching minesweeper "Alexander Obukhov"
But the main feature of the ship is its unique design, namely the manufacturing technology of the hull. The ship's hull is made of monolithic fiberglass by vacuum infusion (for the first time in Russia). At the same time, when creating the minesweeper, the world technological record was set - for the first time in the world, a monolithic body of fiberglass with a length of almost 62 meter was manufactured. The technology for manufacturing the hull was developed with the participation of the Central Research Institute of Structural Materials Prometheus and the Central Research Institute named after Academician Krylov.

The main advantages of the monolithic case are:
- the increased durability in comparison with the traditional steel case;
- the increased term of operation;
- increased survivability characteristics;
- low weight.

Moreover, unlike low-magnetic steel, a lighter and more durable fiberglass body has a minimum level of physical fields. Contactless mine fuses on it simply do not work, which is very important for ships of this type. True, the technology of creating such a hull is very expensive, so the first ships of this project flew into the Russian Defense Ministry a lot of money, the agency RIA News.

The on-board armament of the 12700 Alexandrite minesweepers is represented by one 6-barreled AK-306 artillery unit of the 30-mm caliber and one Marine thug machinegun system (MPTU) of the 14,5-mm caliber (KPVT machine gun). Instead of the 14,5-mm machine gun, two 12,7-mm Kord machine guns on the pivot installation (6P59) are also possible. There are also 8 man-portable air defense systems aboard the minesweeper. 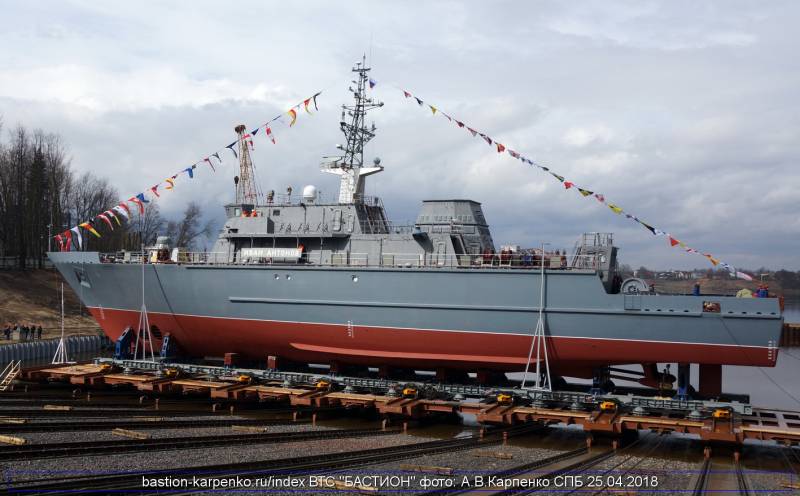 Launching minesweeper "Ivan Antonov"
Minesweeper "Ivan Antonov" is equipped with modern complexes for the search and detection of mines, which are controlled by the automated system "Diez". In addition, the minesweeper has a sono-search station Livandia-M. The control system "Diez" in real time receives, processes and displays on electronic maps real-time information that comes from navigation systems, which significantly facilitates the work of the navigator. From the minesweeper, various surface and underwater autonomous anti-mine devices can also be used.

In particular, specifically for the minesweepers of the 12700 Alexandrite project in France, the ECA Group acquired three crewless Inspetor Mk 2 boats, which are a mine action system controlled from the carrier ship. Each such 9-meter boat is equipped with an active GAS mine survey on a retractable match in the bow (to search for mines at depths to 10 meters, including anchor ones) and a towed GAS side view TOWSCA (to search for mines at depths from 10 to 100 meters, including objects on bottom), as well as various remotely operated underwater vehicles for searching and destroying mines, in particular, two Seascan Mk.2 underwater mine-warning vehicles. An unmanned boat can operate efficiently at a distance of up to 10 kilometers from the carrier ship. At the end of June 2017 of the International Maritime Defense Salon, which was held in St. Petersburg, Dominic Mallet, Commercial Director of the ECA Group, said that the concern expects to establish in Russia licensed production of Inspector Mk.2 boats and autonomous underwater vehicles Seascan Mk2 in Russia .

Naval expert captain of the first rank Mikhail Slavin told RIA Novosti that the lion's share of mine equipment for the first minesweepers of the 12700 project was purchased in France before the introduction of sanctions. At the same time, minesweepers were originally designed for the fourth-generation Russian Alexandre-ISPUM mine system, which, unfortunately, has not yet been brought to mind. 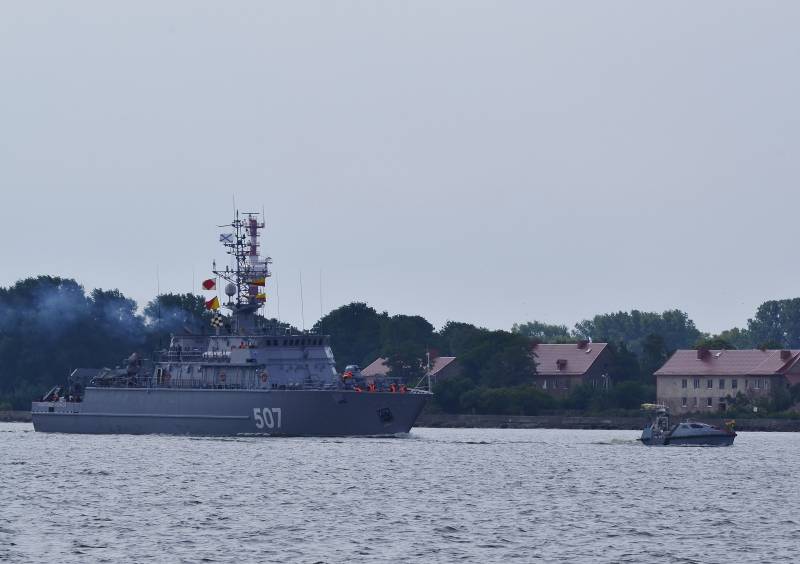 Minesweeper "Alexander Obukhov" and the unmanned boat Inspector Mk 2
Pavel Zvonarev at the beginning of 1980, who served as a navigator at the base minesweeper of the Baltic Fleet, in an interview with RIA Novosti noted that minesweeping was always considered a difficult task in terms of providing navigation. “For clearing a safe corridor, 6-7 ships are usually used, which move in a tight ledge with unrolled trawls. The speed of the minesweepers is constant - from 6 to 12 nodes. The structure of the ships is maintained in such a way that no unprotracted zones remain behind them. Over time, this tactic has not changed. " According to Zvonarev, the navigators of the minesweepers provide the so-called “shut off” - the clearing of mines of water must necessarily go one on top of another for approximately 30% of their width, the effect of overlapping is realized. In order to achieve meter accuracy during trawling, an independent radio navigation system with special lighthouses is promptly deployed, all maneuvers and turns are calculated, a coastline and various landmarks are tracked along the locator. The presence of modern navigation equipment on the ships of the project 12700 allows you to do it much more accurately and faster.

In addition to modern robotic systems and complexes, the new minesweepers were equipped with traditional means: the contact trawl GKT-2 and acoustic ShAT-U. The first of them consists of two long flexible steel leash with rigidly mounted on them passive cutters, as well as distributing devices in the form of floats at the ends. If you observe this trawl from a height, then with its outlines it will resemble a dovetail. The scheme of action of such a trawl is quite simple. Hooking on the trawl, the minrep (the cable with an anchor that holds the sea mine under water) begins to slide on it, and then falls on one of the cutters and breaks off. After that, the mine that has emerged to the surface can be quickly eliminated with the help of artillery and machine-gun armament mounted on the minesweeper. And with the emergence and spread of bottom mines, so-called non-contact trawls were created, which, imitating physical fields, initiated the detonation of mines of this type.

Despite the absence of strike weapons on board, modern anti-mine defense ships are of strategic importance to the fleet. Modern mining technologies, both from water and from the air (the discharge of mines from airplanes and helicopters) make it possible in a short time and sufficiently to sow the sea area with various mines. No matter how powerful the fleet is, if it is locked up in the places where it is based by enemy mines, its combat capabilities will be significantly limited. Only minesweepers are able to break the mine blockade. Without minesweepers, it will not be possible to withdraw nuclear submarines and cruisers to patrol, land naval landings, and organize effective defense of the coast. In recent years, the command of the Russian Navy seriously worried about the state of the mine fleet and the issues of its replenishment with new ships. Until 2050, the Russian fleet’s need for new minesweepers is estimated at least in 30-40 ships.