Europe as the theater of the coming war with Russia

17 May 2018
31
Even before Donald Trump came to power, the famous American lawyer Bruce Fein published in the Washington Times a material that caused a real shock in the western information space. In his article, Fein called on the US ... to withdraw from NATO. The need for such a step was justified by a number of reasons: legal, political, economic and military. In particular, he pointed out that the NATO Charter contradicts the US Constitution, because it obliges the United States to protect the borders of all 27 members of the alliance (article 5) without the necessary congressional approval required by the basic law. At the same time, the US Supreme Court ruled that the requirements of the country's constitution above its contractual obligations. 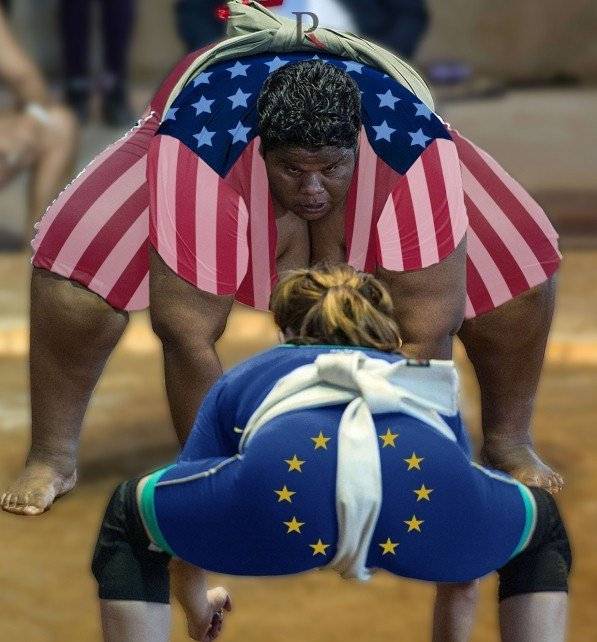 Stressing that the United States bears the 73% of the NATO financial burden, Bruce Fein indicated that America does not need military assistance from member countries of the alliance, since it is able to protect itself.

He even suggested that the armed conflict between Russia and the European countries that are members of NATO would only benefit Washington, as it would distract Moscow from the confrontation with America and put an unbearable burden on the Russian economy.

Obviously, these ideas expressed as far back as 2014 made a considerable impression on Donald Trump, who creatively rethought them and put them in a slightly modified form as the basis of their European policy.

He did not talk about withdrawing from the alliance, but he called into question the unconditional fulfillment by 5 of the article of the NATO statute, and also demanded that the allies increase their contributions to the bloc’s budget. And he made it clear that the main burden for solving a number of problems must be assumed by the Europeans - in particular, in the Ukrainian question.

However, in reality, American policy toward NATO and Europe is not as altruistic as Fane and Trump assert. Maybe the United States does not need the help of the allies to defend itself, especially if one considers that no one attacks them.

But they really need cannon fodder for the wars and conflicts that they unleash and lead. In addition, the US spending on the block is to some extent fighting off due to the fact that they force NATO members and applicants for this status to buy American weapon. Finally, the block is used as a tool of American hegemony in both Europe and the world.

Of course, all Europeans know this. And they understand that in exchange for all the costs (economic, political, social) associated with staying in the alliance, and following in the wake of American aggressive policy, they receive some kind of rather ephemeral security guarantees, which, strictly speaking, no one particularly threatens. At least from the outside.

Actually, the loyalty of the European partners of the United States is provided not so much by fanning the myth of the notorious Russian threat, but by well-organized work with the political elites of the EU countries, ensuring their personal loyalty to Washington. 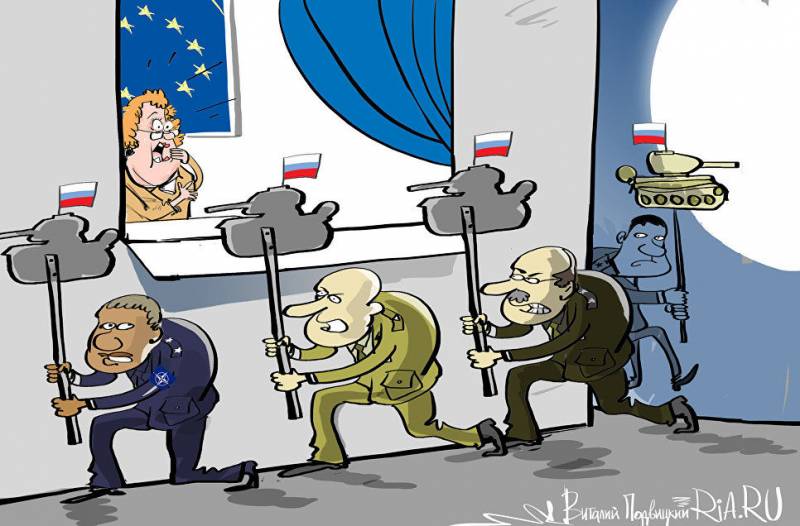 However, Trump clearly went too far. The fact that the United States is the main beneficiary of NATO, in Europe, many believe. And Trump's requirement to increase the appropriations for the maintenance of the alliance, they considered unfair and frankly fraudulent.

This was followed by an attempt to “twist the hands” of the EU leader, Germany, on the issue of Nord Stream-2, the unilateral withdrawal of States from the UFID on the Iranian nuclear program, and now the decision to transfer the embassy to Jerusalem, contrary to the position of most EU countries.

Europeans are aware that they have become hostages of the adventurous and inadequate policies of Washington, and they must also pay for their own interests!

What is the recent speech by the US ambassador to the United Kingdom, Woody Johnson, who directly said that for the sake of friendship with America, England should seriously fork out. Moreover, he said that if London expects to remain a reliable ally of America, he needs to increase military spending and directly indicate where to get the money.

In order to purchase American F-138 35 fighters, for which there are no funds (the UK MoD has already acquired the 15 aircraft and promised to buy more 33 by the 2025 year), it is necessary, according to the ambassador, to curtail a number of social programs. First of all in the National Health Service.

Is it any wonder that European top politicians actually state that the United States not only does not provide security to European allies, but also creates new threats. Whether it is the Middle East and North African conflicts in millions of migrants, the war in Ukraine or being drawn into a confrontation with Russia, fraught with armed confrontation with unpredictable consequences. 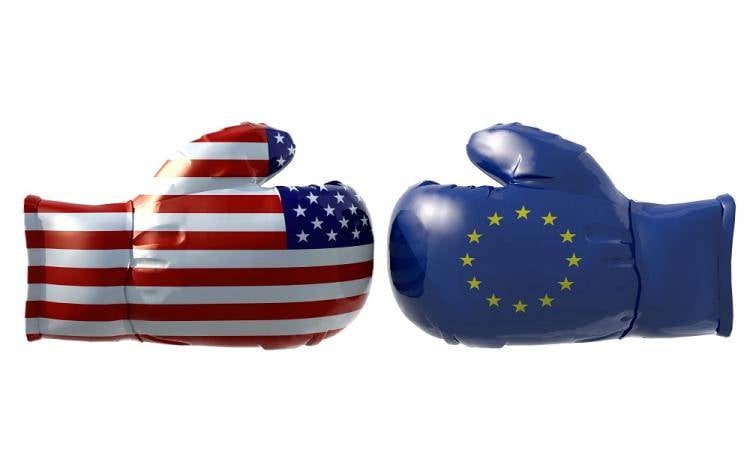 The consequence of the current situation was that German Chancellor Angela Merkel, who once had a reputation as a pro-American politician, recognized that European countries can no longer rely on Washington on the issue of defense.

“Gone are the days when the US simply defended us. Therefore, Europe must take its own fate into its own hands, and this is our task for the future, ”Merkel said at the awards ceremony for the Carl the Great prize to French President Emmanuel Macron in Aachen.

In France, similar sentiments are gaining momentum. French Finance Minister Bruno Le Mayor on Europe-1 radio station said that Europe should not act like a vassal of the United States. “Do we want to be vassals who obey the decisions taken by the United States, clinging to their pants?” The minister asked rhetorically.

Federica Mogherini voiced a consonant position, noting at the conference in Florence that “the world is in chaos” and Europe “needs a professional army”.

Recall that in November last year, the majority of the EU adopted an action plan “Permanent Structured Cooperation on Security and Defense Issues” (PESCO), which provides for extensive cooperation between European countries in the military sphere. In this step, most experts saw the foundation being created for an association alternative to NATO, and not complementary to it (as some EU leaders asserted). 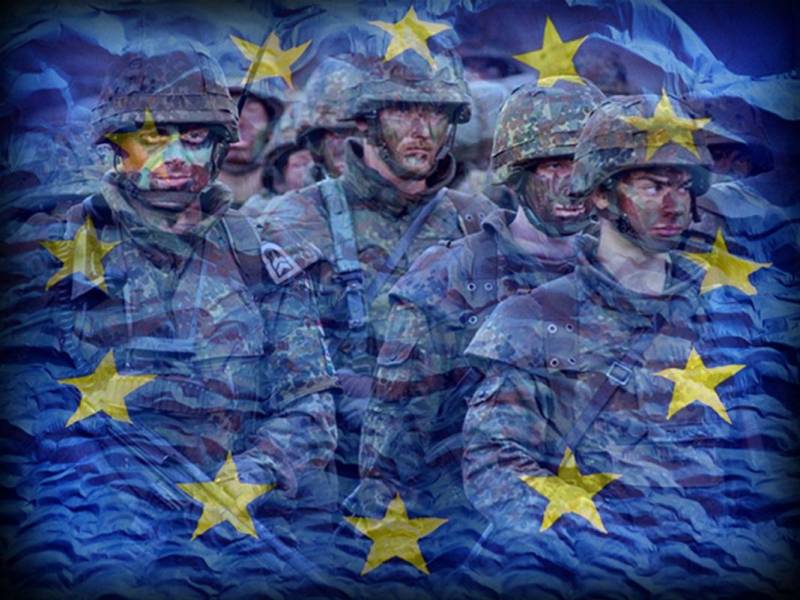 In addition, there is a direct financial calculation. It is much more profitable, by developing our own armed forces, to buy our own weapons, to invest money in our own production and scientific base, creating new jobs for our specialists and scientists. And do not invest them in the US military-industrial complex.

It is possible that the Europeans would try, little by little, without making any sudden movements, to work on the creation of European security forces, gradually weakening the significance of NATO.

But there is no time for such an evolution. Washington spoke to the allies in the language of ultimatums, threatening Europe with a trade war. His exit from the UFID means that sanctions will be imposed against European firms if they do not obey American dictatorship and continue to work with Iran and Russia.

Trump undoubtedly risks going all-in. But he has no other way out. It is not only the geopolitical situation taking shape that makes it possible to use this, perhaps the last attempt, to reverse the European “fronde”, to subordinate it to itself and to make it play by fully American rules.

The American leader must justify the confidence of the United States military-industrial complex.

No wonder the wise George Bush Sr. opposed the unification of Germany and the collapse of the USSR, reasonably believing that this political success of the West would soon turn into huge financial losses for the weapon magnates, one of the main subjects of American policy.

The incomes of arms corporations fell - the number of orders decreased. The situation improved somewhat after the victory of the “euromaidan” and the start of the war in the Donbas. But Trump faces a truly ambitious task - to radically improve the state of the affairs of American arms corporations. For this, he incites conflicts one after another, rapidly increasing the degree of international tension. What can end this risky game, it is easy to imagine. And first of all it is terrible for Europeans, whose lands Americans already consider as theaters of the future war.

That is why in her speech, Merkel noted that continental Europe should now maintain friendly relations not only with the United States and Britain, but also with Russia.

That is, the European Union can ensure its security by reviewing the rules of the game with the Anglo-Saxons and building relations with Russia on the principles of cooperation and good neighborliness.

It is obvious that it will be extremely difficult for Europeans to realize their interests, at least in cooperation with Russia and Iran, even in creating a “European army”. The United States will do its utmost to suppress this front. Including using the forces of the Young Europeans: former socialist countries and the Baltic republics, which, despite EU membership, are focused more on Washington than on Brussels.

If Europe succeeds in escaping from the dictates of the United States, it is most likely partly. 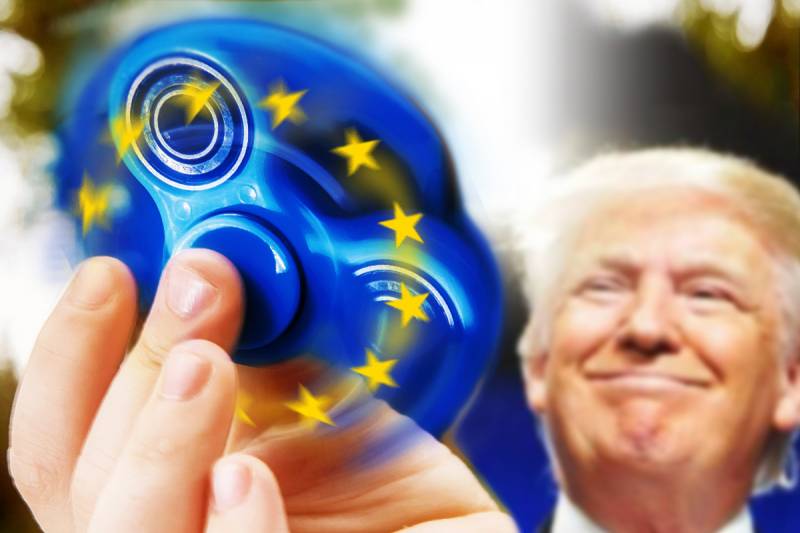 Ctrl Enter
Noticed oshЫbku Highlight text and press. Ctrl + Enter
We are
Situational analysis of the death of the MH17 flight (Malaysian Boeing 777), made on the basis of engineering analysis from 15.08.2014Results of the week. “In our cooperative, the board is always agreed”
Military Reviewin Yandex News
Military Reviewin Google News
31 comment
Information
Dear reader, to leave comments on the publication, you must sign in.