Cossacks: protect the state or violate civil rights and freedoms? 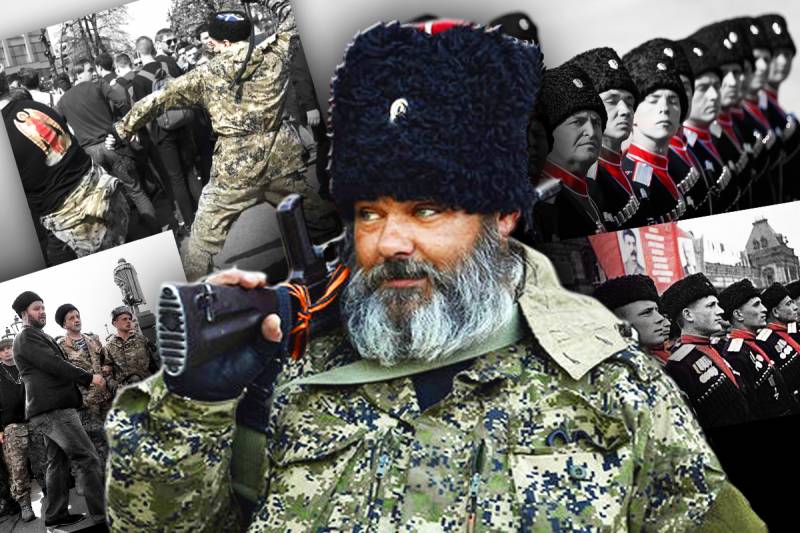 When 5 in May 2018 in Moscow and a number of other cities in Russia passed anti-government rallies against President Vladimir Putin, people in Cossack uniforms took part in dispersing the protesters. Russian media outfitted photographs and video footage, in which the Cossacks are fighting with the protesters. The very participation of people in the Cossack form in the dispersal of rallies caused an extremely ambiguous reaction in Russian society.

The indignation of representatives of the liberal political spectrum is understandable, but many public and political figures of other views were categorically opposed to the participation of Cossacks in this form in the political life of the country. For example, the famous journalist Maksim Shevchenko, in protest, pointedly left the Human Rights Council. He made this decision after the HRC refused to meet at his proposal for an emergency meeting on the participation of the Cossacks in dispersing the rallies. Although the HRO did not refuse to investigate these events, its head, Mikhail Fedotov, stated that he would certainly send a request to the law enforcement agencies. 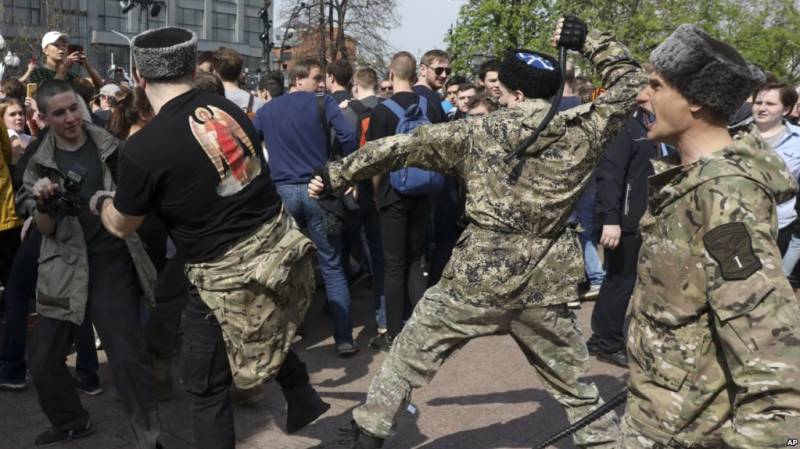 The perplexity of the public about the participation of the Cossacks in the dispersal of rallies is understandable. In a legal state, which the Russian Federation, of course, is, a monopoly on the use of violence should have only the relevant state bodies vested with the necessary powers for this: the police, the National Guard, and other law enforcement agencies. If we draw a parallel with the Russian Empire, then there was a completely different situation. Cossack troops in pre-revolutionary Russia had official status.

Cossack administration was finally centralized in the 19th century. As a military-service class, the Cossacks were actively involved in the protection of order within the Russian Empire, in border and customs services. In 1905-1907 The Cossacks of the second stage were mobilized by the tsarist government for serving in the public order, which consisted in the dispersal of political demonstrations and strikes, the protection of public institutions, enterprises, landlord estates and other objects. It was during this period that a negative attitude towards the Cossacks as a “satrap” of the tsarist regime began to form among a part of the population of the Russian Empire. Subsequently, this negative attitude resulted in the tragedy of the Cossacks during the Civil War and the first decades of Soviet power. 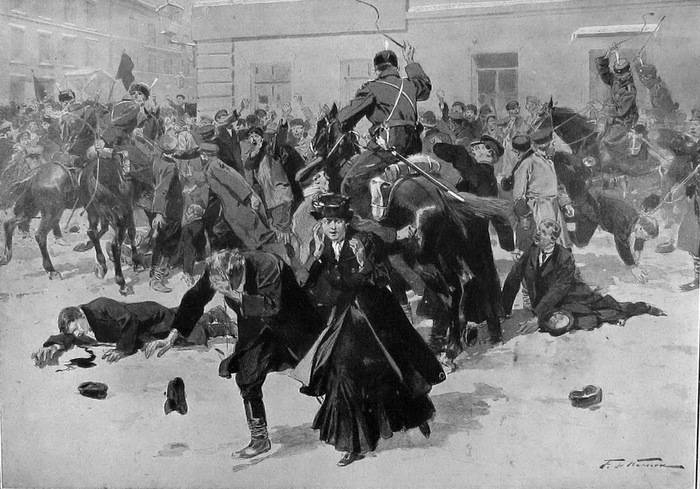 The centuries-old Cossack service of the Russian Empire ended with the February 1917 revolution of the year and the abdication of Nicholas II. AT stories Russian Cossacks began a new stage - the most dramatic, during which the Cossacks - “white” and “red” - fought each other. Despite the fact that a significant part of the Cossacks supported the Soviet government, this did not become an argument against the policy of storytelling, which the Bolsheviks resorted to already in 1919 year. For seven decades of Soviet power, the organizational structure, economy, traditions and way of life of the Cossacks in all regions of Russia were dealt a crushing blow. The Cossacks began to recover from it only at the turn of the 1980-1990-s, but the revival of the Cossacks took on completely different forms. Firstly, not all people who were Cossacks by origin took part in the revival of the Cossacks.

On the other hand, among modern Cossacks, not everyone is of Cossack origin, for many people participation in Cossacks is akin to expressing their political and social views. Secondly, the post-Soviet Cossack troops, deprived of the economic base and status recognized by the state, are only public organizations with all the ensuing consequences. For two and a half post-Soviet decades, the activities of many Cossack organizations managed to set up a significant part of Russian society against the modern heirs of the Cossacks. What feelings can be caused by adequate people "burdened" generals and colonels, awarded with imaginable and inconceivable awards and assigning ranks and positions to themselves? 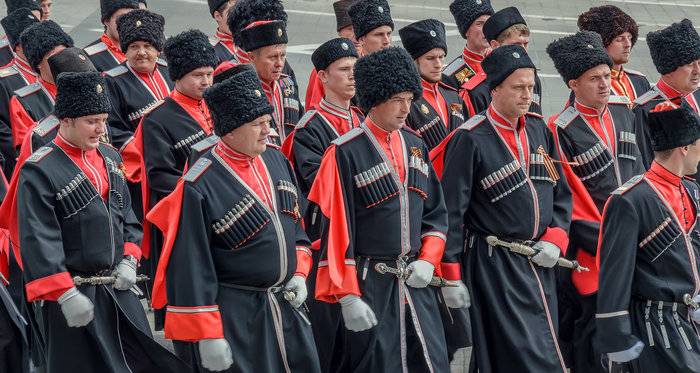 However, as early as in 1995, the State Register of Cossack Societies was created. In an effort to streamline the situation, the Russian authorities in 2005 ensured the adoption of the Federal Law 154-FZ “On the Public Service of the Russian Cossacks”. The law contains the concept of the state register of Cossack societies in the Russian Federation as an information resource containing information about Cossack societies. The law provides for the Russian Cossacks to assist the state in performing a number of functions, among which are listed: assistance in military registration and military-patriotic training of draftees, participation in disaster relief and emergency situations, in the protection of public order, and in the protection of the State Border. Of the Russian Federation, ensuring environmental and fire safety. Thus, the law allows for the participation of Cossacks in the performance of a number of functions of state bodies.

State interest in the Cossacks increased significantly after 2014, and was associated with events in Ukraine and with the active participation of the Cossacks, primarily the Don and Kuban Cossacks, in the reunification of Crimea with Russia and in the fighting in the Donbas. The authorities began to consider the Cossacks as a reliable and efficient ally, acting in defense of the national interests of the Russian state.

Naturally, the authorities are also impressed by the support of domestic policy on the part of the registered Cossacks. Currently, the most serious and active is the Kuban Cossack army, which really makes a very significant contribution to the protection of public order in the Kuban and the Black Sea coast of the Caucasus, the protection of state borders, and the fight against emergency situations. It was the Kuban registry Cossacks that played an important role in ensuring the reunification of the Crimea with Russia. Don non-Cossacks under the command of ataman Nikolai Kozitsyn, in turn, fought in the Donbas. Many Cossacks died heroically, fighting against the Ukrainian army and the “dobrobat”. 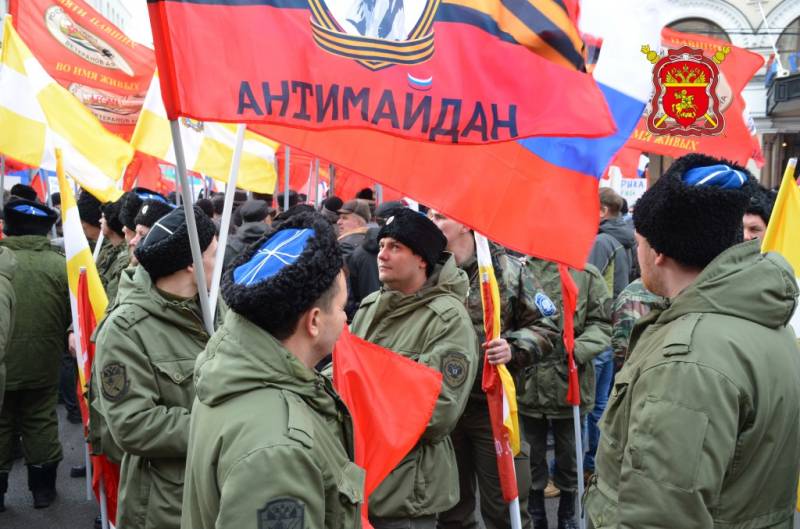 From about the same time, individual Cossack formations actively participated in the suppression of opposition speeches. Naturally, such activities of the Cossacks are carried out by them exclusively with the support of the state, but here the country's leadership made a certain mistake. The participation of the Cossacks, who, despite the existence of a relevant law, still have an incompletely regulated and regulated legal status, raises many questions in the protection or dispersal of political events and allows the Russian opposition to attack the authorities for “using illegitimate militias”. When an unauthorized rally is dispersed by the police or parts of the internal troops (now the National Guard), it is difficult to argue with that, since they are endowed with the appropriate powers in law, but the Cossacks do not have such powers.

At the same time, a number of experts believe that it’s premature to talk about the unequivocal fault of the Cossacks in the attack on 5 protesters in May. Thus, Professor Oleg Matveychev, in an interview with Business Online, stressed that the government allowed a rally of supporters of politician Alexei Navalny elsewhere, but the Navalists themselves came to Pushkin Square, where they actually ran into the Cossacks present there. Knowing the behavior of modern Russian liberals, it is difficult to disagree with Matveychev. Sometimes they undertake purposeful provocations to create situations in which they can expose themselves as “victims” or “police brutality”, or attacks of Cossacks (paratroopers, nationalists, etc.). For example, eyewitnesses to the ill-fated rally of 5 in May say that aggressively-minded young people from among the protesters, seeing the Cossacks present in the square, began to bully them, chanting “Mature! Dressed up! ”Among the Cossacks, there are people with combat experience who have passed through“ hot spots ”, participants in wars in Transnistria and Chechnya, Yugoslavia and the Donbas. Naturally, such offensive behavior of the protesters could not please them. And it seems that the protesters on the negative reaction of the Cossacks and counted. One of the eyewitnesses to those events generally claims that the fight began after one of the Cossacks was thrown sand in the face, and his comrades responded.

Another thing is that the Cossacks would not have to succumb to such provocations, since they only create the image of the martyrs of the liberal opposition. Actually, it is precisely such incidents that are beneficial to the top of the liberals, since they allow to further blacken the existing power, ask for financial and informational assistance in the West.

The opposition Cossacks have already used their own purposes. Thus, a special channel appeared in the Telegras, on which they find out the identities of people in Cossack uniforms who participated in the rally at a rally. The creators of the channel claim that they have calculated more than a dozen Cossacks, including teachers from St. Petersburg and Moscow universities and participants in the hostilities in the Donbas. The sources of financing of the Cossack formations are also actively discussed, emphasizing that the Cossacks give money to the Ministry of Culture of the Russian Federation and the Moscow Mayor's Office. In a number of media outlets, information appeared that only from 2016 onwards did the Cossack formations of Moscow receive funding from the state totaling 37,6 million rubles, and these funds were also spent on preparing the Cossacks for action under the protection of public events. 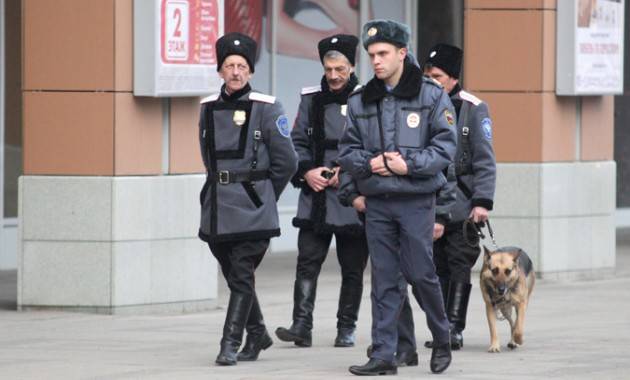 But if we turn to the text of the Federal Law 154-FZ “On the State Service of the Russian Cossacks”, we see that it provides for the possibility of financing the Cossack societies from the state budget. And there is nothing wrong with that. For example, in the Kuban Cossacks really protect public order in crowded places, at railway stations and near the station territory. If you ask around the locals, they will easily confirm that with the advent of Cossack patrols, the streets really became calmer. In this regard, the Krasnodar Territory is even envied by residents of another neighboring Cossack region, Rostov, where it has not yet been possible to achieve such a scale of cooperation between the Cossacks and law enforcement agencies (although on the Don the Cossacks are increasingly being attracted to policing, patrolling territories, etc.)

Interestingly, representatives of the registered Cossacks are now virtually dissociating themselves from the participation of their Cossacks in dispersing the rallies. So, in the media there was information that the Central Cossack army, which is the main Cossack association of the capital and the capital region, did not send its Cossacks to this mass event. In the Department of Regional Security of Moscow from the Cossacks who participated in the fight at the rally, they also hurried to disassociate themselves. According to representatives of the Moscow mayor's office, neither the authorities of the capital, nor the metropolitan police did not attract any Cossacks to protect public order at mass events, although the mayor's office actively supports Cossack formations, including those engaged in security activities.

However, the atamans of the registered Cossacks do not deny that the Cossacks, “social activists”, that is, representatives of the Cossacks of the non-registrant and uncontrolled by the state, could take part in the action. On the other hand, if the Cossacks serve as police assistants and become witnesses of a mass event whose participants do not obey the police and do not want to disperse, what should the Cossacks do? If they do not have the authority to use force to disperse unauthorized rallies, what is the use of the state of such Cossack formations for the state and why really finance them? In any case, now the last word must be said by representatives of the government. It is time to put an end to the issue of settling the official legal status of the Cossacks, their powers in policing and cooperating with the police.

Ctrl Enter
Noticed oshЫbku Highlight text and press. Ctrl + Enter
We are
Who are the Cossacks?Tatarstan authorities will restore order in the republic - Sharia
Military Reviewin Yandex News
Military Reviewin Google News
262 comments
Information
Dear reader, to leave comments on the publication, you must sign in.