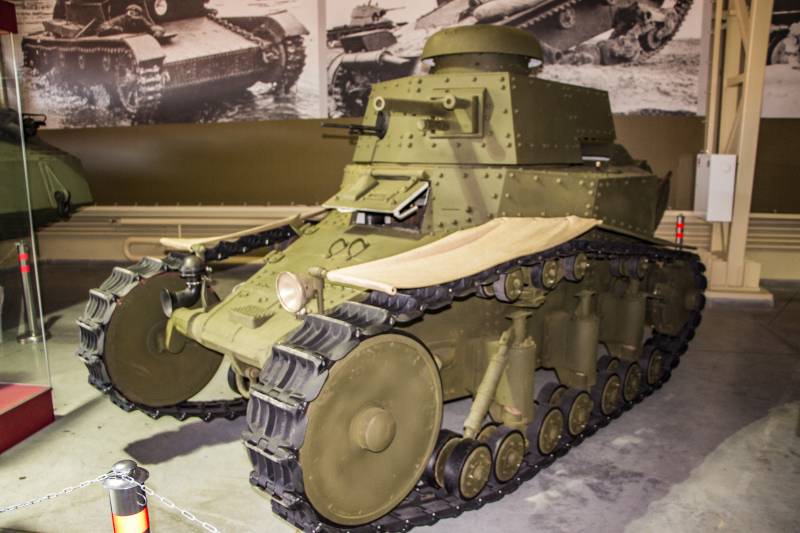 All of the above combat vehicles were released in quantities of more than 1 units, which in principle makes it possible to talk about mass production. However, if we are talking about factory serial production, and not a screwdriver assembly, here, without any doubts and reservations, the firstborn of the Soviet tank construction was T-18.

959 made machines - this is exactly what is considered to be a series. 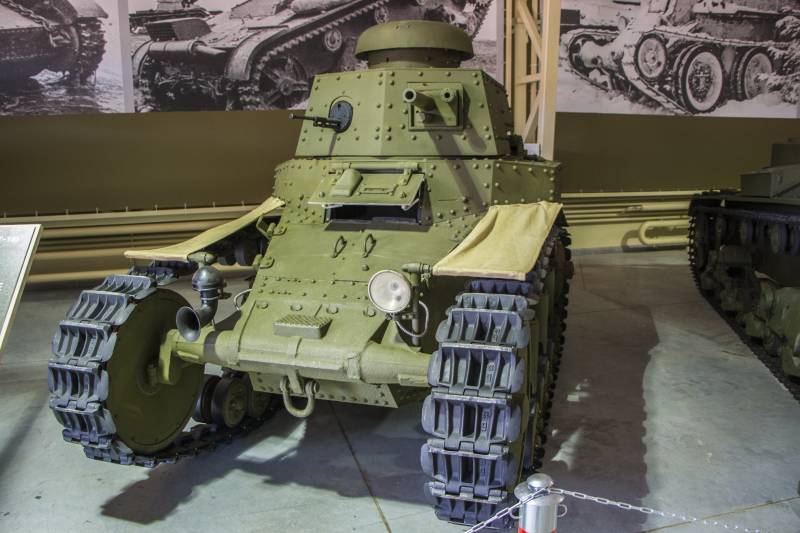 In the design of T-18 or MC-1 (“Small accompaniment”, model 1), the same old Renault FT-17 is clearly visible. It was this machine that became the reference in the production of all the above models. 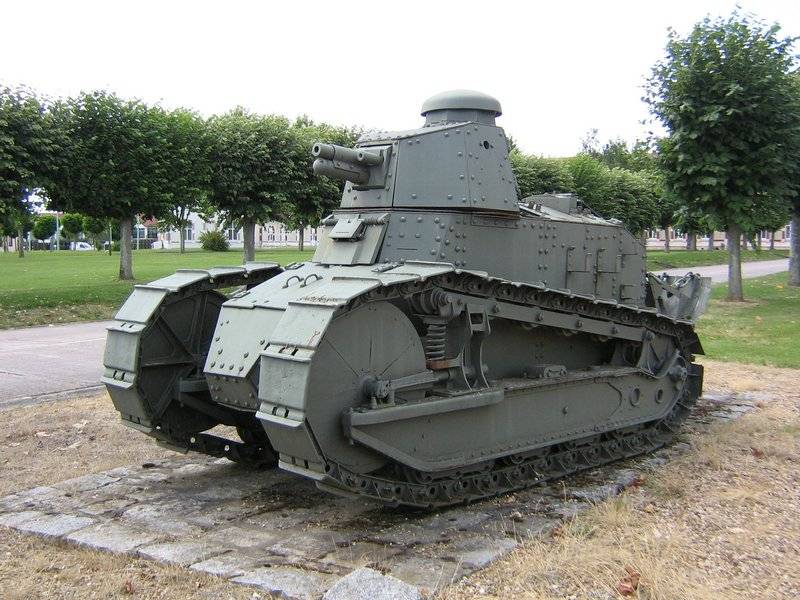 But there was nowhere to go, in the Russian Empire there were no tanks at all, so only the path of licensed production remained. For which, in France, the official license for the production of FT-17 was purchased.

In 1924, the Tank Building Commission’s requirements for an infantry escort tank were developed.

In accordance with them, the creation of a tank with a mass of 3 tons, with weapons from an 37-mm cannon or machine gun, 16-mm armor and a maximum speed of 12 km / h was assumed.

In this case, with 1924, there was an active study of captured foreign tanks. More than other Soviet military experts liked the Italian "Fiat 3000", which was a creation based on the "Renault 17". 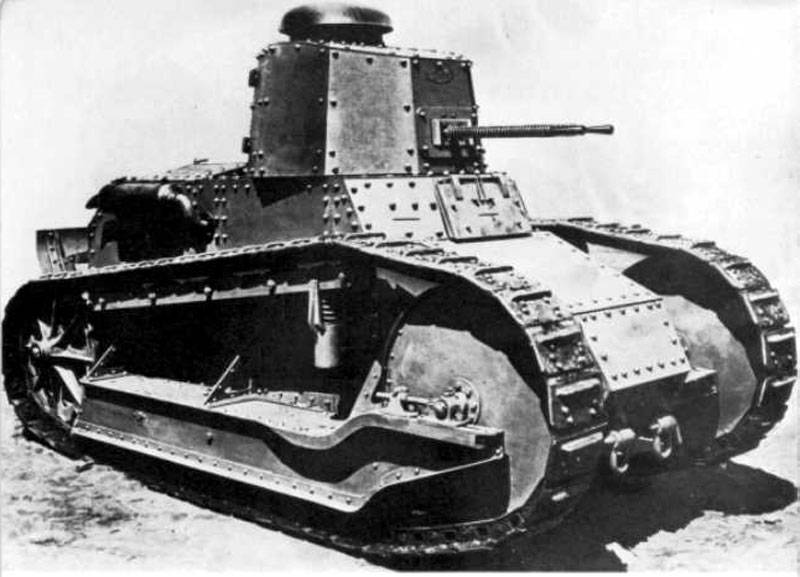 In the spring of 1925, after reviewing the project at the Red Army headquarters, the requirements were adjusted: the allowable weight of the tank was increased to 5 tons in order to accommodate a more powerful engine and the simultaneous installation of a gun and a machine gun.

By March 1927, the first prototype was completed, receiving the T-16 index. The prototype tank was very similar to the Renault 17, but it had a shorter body length, less weight and better mobility. But the main thing - the tank was much cheaper than the first-born of the Soviet tankoprom "Tank M".

The tests, however, revealed a huge number of flaws, and the prototype was not approved.

The second prototype, during the construction of which all comments were taken into account, was completed by May 1927 of the year and went to the tests under the symbol T-18. The tests ended successfully, and in June 1927, the tank was put into service under the designation “small tank escort arr. 1927 G. ”(MC-1) or T-18. 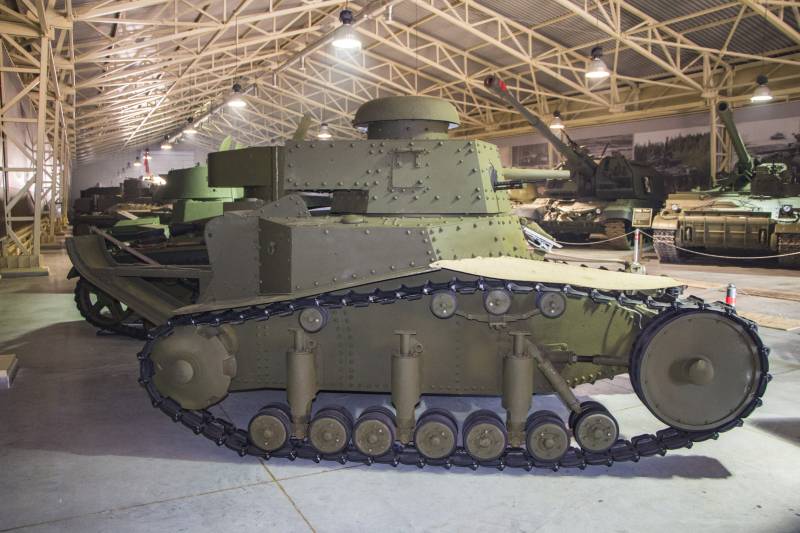 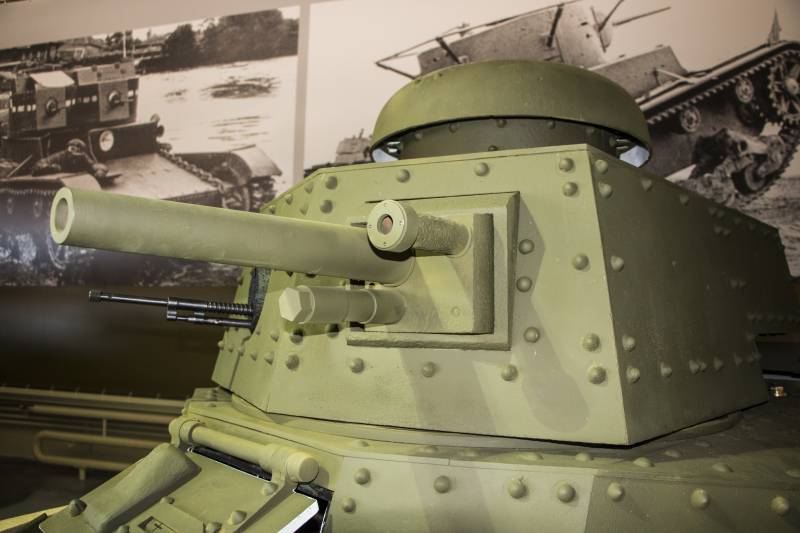 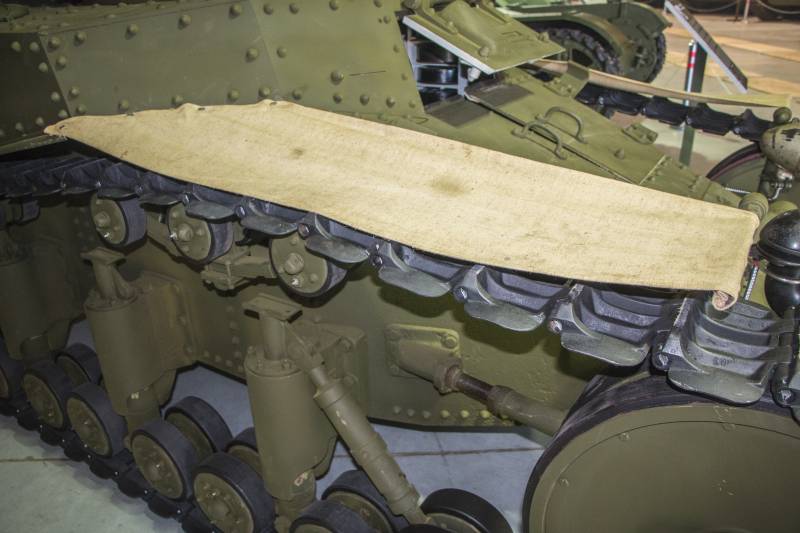 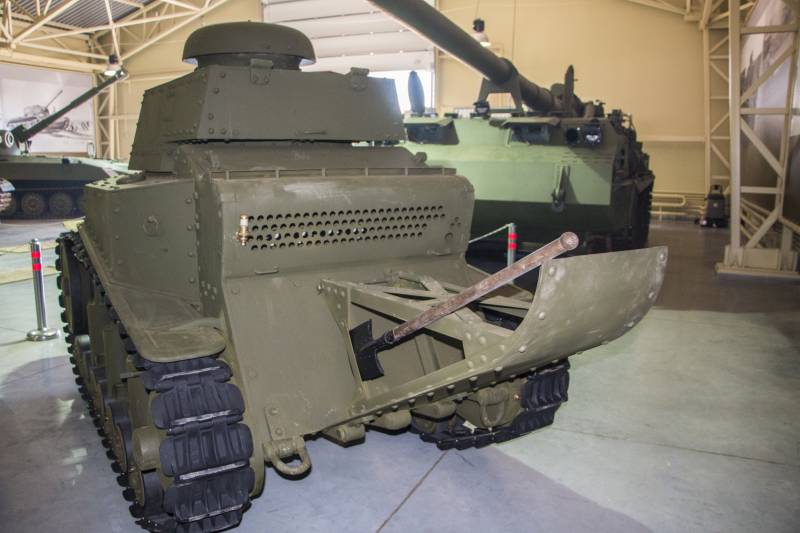 In general, he is still an "ugly duckling." However, even in the contours of the T-18, it was impossible to discern the silhouette of the T-34 and, all the more, the T-90, it was our first production tank. 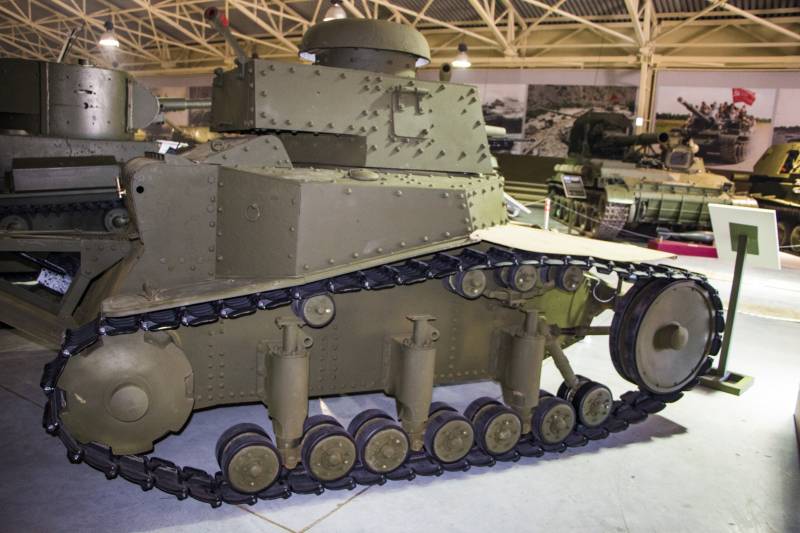 They built the firstborn at the Leningrad plant "Bolshevik" and the Motovilikhinsky machine-building plant in Perm.

Strange, but the life of the first child was very long and rich. Despite the clumsy and frankly not sparkling TTH.

Years of operation MC-1 / T-18 in all directories are listed as 1928 to 1942 year. But even before the Great Patriotic War, he managed to make war.

The baptism of fire T-18 received during the conflict on the CER in November 1929. In the autumn, the Trans-Baikal Group of the Special Far Eastern Army (ODVA) was given a company of 10 tanks, which took part in the Mishanfussky offensive operation 17-19 in November. 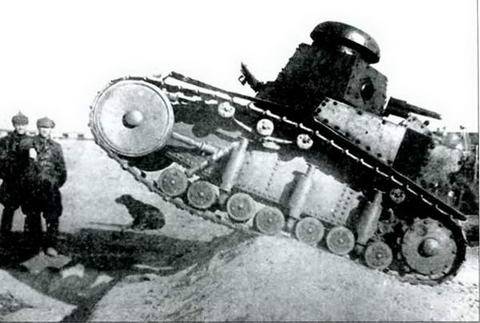 By the beginning of the 1938 of the year, the T-18 who were in the ranks had reached an extreme degree of wear. However, instead of being scrapped and sent for scrap, a different fate was prepared for the tanks.

By order of the People's Commissar of Weapons Vannikov from 2 in March 1939, all remaining T-18s in the ranks were decommissioned, and 700 of them were placed at the disposal of the fortified military districts.

In fact, the construction of fortified areas of the Leningrad Military District 1934 with decommissioned T-160 tanks as BOTs, armored firing points, began in 18. 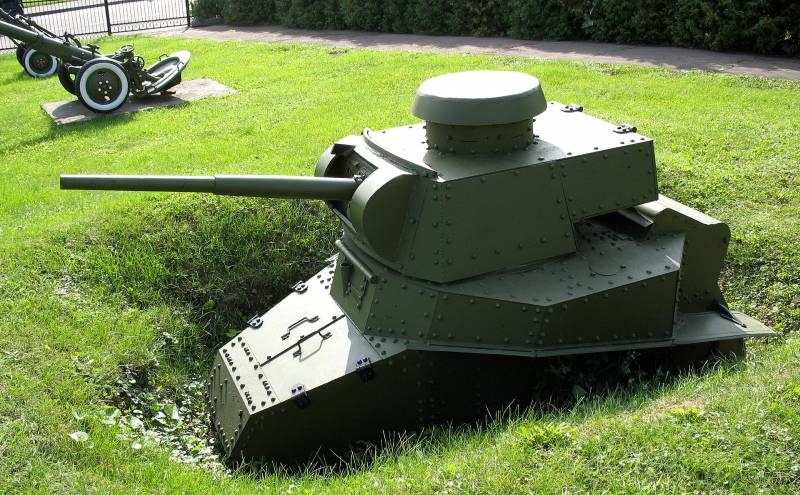 The tanks transferred to the fortifications were subject to re-equipment for the pair guns of the DT, DA-2 machine guns or on the 45-mm guns of the 1932 model.

Engines and transmissions were dismantled from faulty tanks, and armored hulls were buried along the turret into the ground or simply installed as a BOT at bridges, intersections of roads and in other places convenient for defense.

Those tanks that could still move and were in a satisfactory technical condition were attached to the garrisons of the fortified areas for use as mobile firing points. 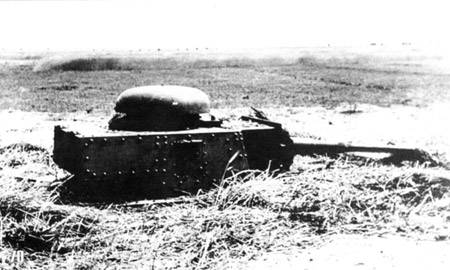 The converted T-18 pillboxes were mainly concentrated on the western borders of the USSR, but a rather significant number (around 140) was also installed in the fortification system in the area of ​​Lake Hassan, where in 1938 there were battles with Japan.

Information about the combat use of T-18 in the Great Patriotic War are mainly fragmentary. Most of the tanks, concentrated on the western borders of the USSR, were destroyed or captured in the first days or weeks of the war, although a few copies were used a little longer.

The tanks T-18 and BOT based on them fought with the enemy in fortified areas. It is known about the fights with their participation in Osovetsky, Vladimir-Volynsky and Minsk Fortified regions. 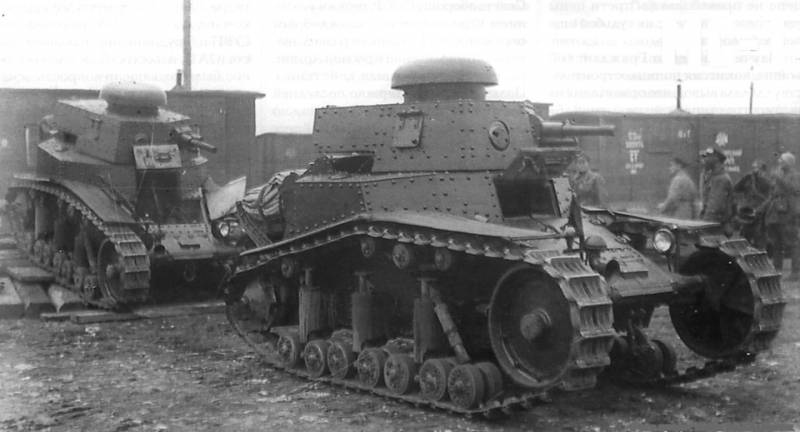 But nowadays, the Far Eastern T-18 are the objects of the search engines and restorers. And, oddly enough, but the number of T-18 in our country is not calculated in units. 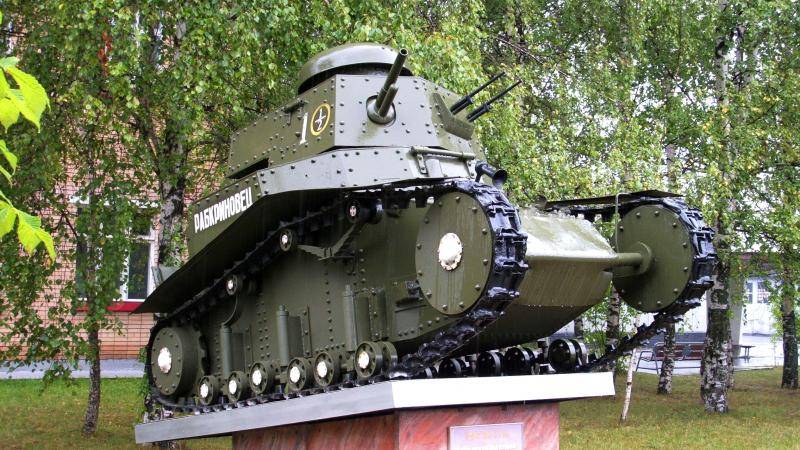 In the Far East of Russia alone, at least eight remaining T-18 are known, one of the tanks took part in the 9 Parade of May 2018 in the city of Ussuriysk. 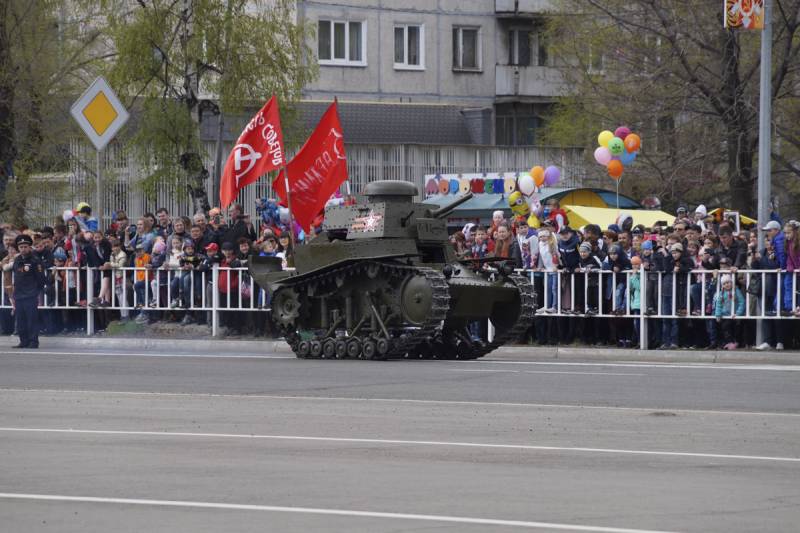 Tank T-18, which served as a model, is located in the Museum of the national military stories in the village Padikovo Istrinsky district of Moscow region.

The basis for the restoration of this exhibit was a tank corps found by search engines on the battlefields of the Great Patriotic War.

Restoration has been underway for more than two years and is actually nearing completion. At the moment, the 90% car is original, and since the issue of restoration in the museum is raised, I am sure that in a year we will be able to see it on the go.

And, accordingly, we will show the tank from the inside.

Ctrl Enter
Noticed oshЫbku Highlight text and press. Ctrl + Enter
We are
Is the "old" well forgotten to become the "new"? Part-2. At the call of honor and dutyThe fire control devices of the Soviet and German tanks of the Second World War. Myths and Reality
Military Reviewin Yandex News
Military Reviewin Google News
50 comments
Information
Dear reader, to leave comments on the publication, you must sign in.