16 May 2018
160
The future of Russian civilization passes through the bridges that restore it historical unity. 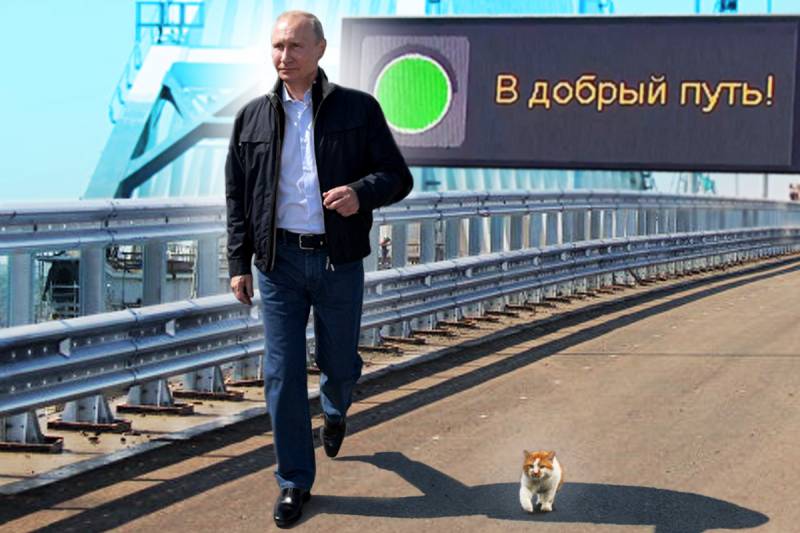 Who would doubt that the current head of the “Bantustan” Ukraine Poroshenko will be very unhappy with the opening of the Kerch bridge! In his opinion, "the construction of this bridge testifies to Russia's disregard of international law." He also said that Kiev had already appealed to the Arbitration Tribunal of the UN Convention on the Law of the Sea with a petition to protect the sovereign interests of the country.

And now I, as a normal citizen of the Soviet Union, to whom all this Square devilry is mortally and irrevocably fed up and who never and did not give anyone consent to the destruction of their great Motherland, will explain how to treat this.

We lived in one big and friendly country. And they were one people. Lived not rich, but righteous. We raised children, worked honestly and were rightfully proud of our common, really outstanding successes. And we went where we wanted on the vast space of one sixth of the earth’s land, which was all ours.

And the Crimea was common! And no one even in a bad dream could come to mind sharing its beaches between representatives of different nationalities. And this single space was our great treasure. For example, I could be born in Western Ukraine, finish high school in Moldova, go to a university in Odessa, and then study at a military institute in Moscow. And in general, I had the right to choose any point on the map of the country where I would like to work and live. And no one could find fault with my documents at the border of any region or federal republic simply because these borders themselves did not exist in nature. A huge country, a huge selection, great opportunities for people.

And then these new feudal lords from among the pseudo-communists of the era of the CPSU marasmus came. They, being still the first secretaries of their republics, already looked at them as their legal and hereditary possession. And therefore it was not difficult for them to formalize in their property these inheritances through the section of our united country. Moreover, the section with all the human "livestock" living there. Yes, it was the livestock, because for this newly-minted "white bone" all the other citizens of the country were only cattle, cattle and powerless workers.

And when this “cattle”, and in fact normal, hard-working, honest Soviet people, in the last desperate attempt to defend justice, voted overwhelmingly to preserve their country, these princes only grinned in response and broke this popular will into small pieces. What else they wanted - to save the country! Maybe you also subsoil with all the oil and gas give away for free? What kind of joy? We will paint between our own and the whole business!

So did. And in order for the people to quickly get rid of the illusions of an equitable world order, harmful to the new rulers, their close kinship and the sense of glaring unnaturalness of the border fences between two neighboring Ivanovka, they began to pump up their new slaves with "national ideology". The main and only meaning of which is that all around are enemies, and in general, “the Muscovites have eaten our fat!”

To consolidate new conditioned reflexes, young brains from the remnants of childhood memories were first washed clean. And then they were filled with standard sausage meat from hastily composed fairy tales about their own great history, about the soundless digging by the "ancient Ukrainians" of the Black Sea or the irrigation of the no less antique sons of the sunless Turkmenbashi of the Sahara desert, or whatever they have there.

And today, at the exit, we have quite a medieval creature living on the ruins of a highly developed, powerful and ... completely incomprehensible to these learned only to fill the cheek space of the hamsters of the former country.

But here's the bad luck: people's memory - a thing strong and beyond the control of the feudal tricks. Therefore, it makes its way to the sun even being rolled up under a meter layer of reinforced concrete new order.

And the main beneficiaries of this order is still scary. They understand that there is only one sure way to get rid of these dangerous, disruptive memories. And this means is enmity and war. To finally break off all ties and eliminate any closeness from the nature of native people. So that they would never again consider Crimea as a common property, but be ready to fight for it with each other and die to the glory of their new masters.

It is in such a deadly paradigm that what is left of Ukraine now lives. Her clever rulers with foreign passports are doing everything to ensure that their servile herd never again remembers their relationship. The fact that they were once a normal part of the Russian people, exactly the same culture of faith and memory as the people on the other side of the border. And that they have absolutely nothing to share with their half-brothers. And, on the contrary, it is necessary to live all together, and not to be hostile to anyone because of what. Because in this case it will not be necessary to divide anything, including the Crimea.

That is why the hosts of Ukraine for twenty-five years in a row muzyzhili and the construction of a bridge across the Kerch Strait. What else was missing was that the cattle privatized by them got, thus, the opportunity to move even more freely along the once common space and, like an hour, forgot who it serves! They didn’t even give a damn about the fact that the same Crimea was constantly aching from the narrowness of its transport communications with the big Russian land, from which he could get much more than from the eternally ill Ukraine.

In the entire former Soviet Union, there was only one ruler, who had enough state mind and human decency not to rely on the war of all against all. And when the case presented itself, and the gangster coup in Ukraine enabled the people of the same Crimea to make their choice, he supported and defended this choice. And the Crimean people showed by their unanimous vote, the extent to which they were opposed to a hopeless life behind these feudal fences, which cut their big house alive. And they deprived the country of all its conquests and achievements, and ordinary citizens of normal work, confidence in the future and in general any meaningful meaning of life. Because to die in the same Donbass for the interests of the same Poroshenko, so that he could continue to devour the piece of prey he got, is not great joy.

Putin and his associates built the Crimean Bridge. And this is a continuation of the same course towards the unity of close people, to the multiplication of their joint forces, to get out of that impasse in which brazen, self-serving and narrow-minded feudal lords have driven us. And there will be more and more such bridges. Because only complete idiots can dream of rotting on their own deaf farms, where nothing but a skinny pig and one meter tall weeds grow. And these bridges of unity will once again make our common national property the Crimea and Odessa, Siberia and Moscow. As it should be. And it’s not for nothing that the Russian president’s name is Putin. I see this as a sign of fate. Because he is a man pointing the way.

The main enemies on this path are the gang of medieval parasites that have lost their human appearance, for which we are all cattle, and our land is only a territory for permanent plunder. And they will never give up their benefits and privileges. Even though they are absolutely illegal, and the people’s right is trampled in the dirt.

And, of course, today this feudal aristocracy is full of all kinds of servants, servants and simply genetic lackeys who, for a fraction, for the leftovers from the master's table, are ready to lick their shoes and whip with batogs everyone who looks at this pack insufficiently respectfully. Therefore, to destroy this ugly grimace of history and to remove this log from the main road of progress will not be easy.

But they are still doomed and will surely lose. Because in them, as a believer would say, there is no grace. Because they build their feudal “happiness” on the misfortune of their peoples, on the defeat and bleeding of their economies and on depriving their countries of the natural and irreplaceable advantages of a huge, barrier-free common market and joint creative work. And the same Kiev elite, who is malignant today about the construction of the Crimean Bridge, is furious precisely because it is the Way from that stinking grave of bondage in which he keeps his slaves.

But we simply have no other way to become a great and free people in our entire historical fullness. That is why we were sent down the Path and Putin. And God forbid that they always be together.

Ctrl Enter
Noticed oshЫbku Highlight text and press. Ctrl + Enter
We are
Situational analysis of the death of the MH17 flight (Malaysian Boeing 777), made on the basis of engineering analysis from 15.08.2014Results of the week. “In our cooperative, the board is always agreed”
Military Reviewin Yandex News
Military Reviewin Google News
160 comments
Ad