Europe versus America: “no” to Trump and the war, “yes” to friendship with Russia!

16 May 2018
38
Europe has rebelled! Angela Merkel, the leader of the European “locomotive”, called for friendship with the Russians and branded Donald Trump, who challenged the international order. 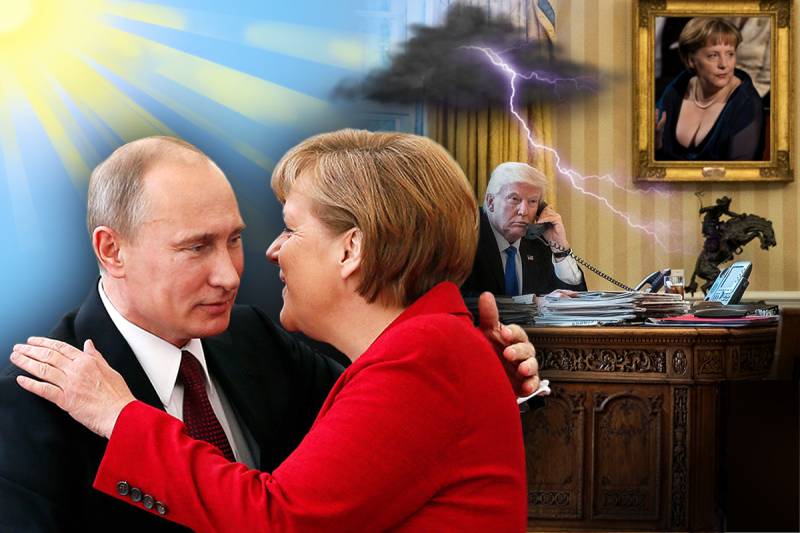 Angela Merkel made a series of statements that, unless they remain empty words, can enter history.

First, Frau Chancellor was indignant at Mr. Trump’s behavior on the international stage. Mrs. Merkel condemned Donald Trump for his decision to terminate a “nuclear deal” on Iran. According to her, the gap reached agreement on the nuclear program was a mistake. And Trump’s unilateral action "undermines confidence in the international order." A unilateral refusal of an agreement unanimously approved by the UN Security Council in its time is the wrong decision!

Secondly, after criticizing Trump for violating the unshakable principles of international order, Frau Merkel acknowledged that transatlantic solidarity is not the same. Yes, and protection from the United States can not wait today. She said: "Gone are the days when the United States simply defended us." Therefore, the European Union will have to take protection "in their hands."

However, what she said does not mean that Germany, or even the whole EU, will give the United States a turnaround and rush into the arms of the Kremlin rulers. Frau Chancellor announced that cooperation between Europe and the United States will continue. The question that it loses importance does not even arise. Transatlantic cooperation - to be, explained the head of the German Cabinet.

However, cooperation cooperation is different. For example, trade and services are one thing, and defense is another. And it’s not for nothing that Merkel declared that European states can no longer rely on the United States in defense matters. She had previously spoken about this, and it is obvious that “taking her own destiny in her own hands” is the path that the experienced chancellor sees for the whole of Europe, from which Germany in no way intends to isolate herself.

The German chancellor is not alone in her political aspirations.

Earlier, on May 8, a troika of representatives of the strongest powers of Europe, Germany, Great Britain and France, together opposed Trump’s unilateral decision and called on Iran not to retreat from an agreement on a nuclear program.

Angela Merkel, Emmanuel Macron and Theresa May asked Iran to "show restraint in response to the US decision." European leaders believe that Iran’s leadership should continue to fulfill its obligations under the deal. The governments of the three countries will remain committed to implementing the agreement. In addition, the troika openly advocated the preservation of economic benefits for the Iranian people, which were determined by the agreement concluded in 2015.

It was a counter-move against unilateral US action. America still could not present such a collective objection. Obviously, in the future, Washington with its unauthorized "entrances and exits" will have a hard time. In the world they talk a lot about isolation of Russiabut it seems that the United States is gradually falling into isolation.

In Russia, it was previously noted that Washington neglects world interests and turns into a “global blackmailer”. As we see, approximately the same thing is now being said in Europe, and especially in Germany, which is the European economic “locomotive”.

On the other hand, tough opposition to Trump’s “one-sided” policy does not at all mean a sharp change of vector with regard to Russia, whatever they say in Germany.

After negotiations at a joint press conference, Frau Chancellor noted the strategic nature of the allied relations between Germany and the United States. Then Merkel and Trump expressed a common position on anti-Russian sanctions and noted that the purpose of the restrictive measures is to force Moscow to observe international law and respect the territorial integrity of Ukraine.

Earlier, a large press published assumptions, including with links on the Wall Street Journal, on the topic of Merkel's upcoming speech against the tightening of anti-Russian sanctions that hinder German business.

The Eastern Committee of the German economy, representing the interests of the majority of German companies doing business with Russia, insists on protecting German subsidiaries. The main point of contention of the German and American authorities is the Nord Stream 2 gas pipeline.

It is also known that Angela Merkel is not eager to increase military spending.

It is difficult to say whether this statement was in defense of German companies and against the growth of military spending in Europe or not. After the talks, it turned out that neither Merkel nor Trump wanted to disclose the details of the conversation. It can be assumed that both are strongly hampered by political differences on a number of issues, including the Iranian program mentioned above. Both leaders did not want to repeat and deepen these differences at a joint press conference. Repeated only those common places where there are enough points of contact. And then, later, Angela Merkel spoke at home in Germany. They spoke and Macron with Teresa May. And it became finally clear: Europe and the United States are going different roads. The world is changing. Europe is inclined to peace, despite disagreements with Russia, and Mr. Trump personifies the military-industrial complex and the war. Rejecting a deal with Iran and forcing NATO members from the EU to arm is an obvious path to war. Trump decided to make America "great again" through the inflation of the military-industrial complex and the rapid pumping of economic muscles through the military industry, risky military enterprises and the Cold War. Such a recipe at one time led to the short-term success of Reaganomics, which ended, however, with the rapid take-off of the US national debt. Trump wants to repeat the method of his idol Reagan, but does not think about the fact that the US national debt is breaking all records, and allies in Europe are critical of the idea of ​​a third world war. And Trump turned into a furious lonely politician.

The basics for rapprochement between Europe and Russia are available. This is not only the business of German companies and the Nord Stream 2.

The agreement on Iran is also one of the items on the international agenda, on which Moscow and the EU have a common opinion.

On May 11, Angela Merkel and Vladimir Putin were in favor of maintaining the Joint Comprehensive Action Plan for Iran. The problem of the “nuclear deal” was discussed by the leaders of Germany and Russia by telephone in connection with the unilateral withdrawal from the United States agreement. “The situation around the Joint Comprehensive Action Plan (JAPD) after the unilateral exit of the United States was discussed. The fundamental importance of preserving the FISA from the point of view of international and regional security was emphasized, ”the message indicated Kremlin press services.

The working visit of the German Chancellor to Sochi, scheduled for 18 in May, also speaks about the convergence of interests between Germany and Russia.

The resistance of Washington’s course has become the topic of the day in other major European media.

For example, well-known analyst Klaus Brinkbäumer (Klaus Brinkbäumer) in an editorial "Der Spiegel" made fun of Trump and reported on the German "resistance" to America.

Trump's fame, the journalist writes, is rooted "in the myths of American heroes." The biggest myth is “Trump’s alleged negotiating experience.” This is nonsense, because Trump "never understood the art of the deal." As a politician, he lacks patience. Strategy and tactics are alien to him. Trump "can only destroy." He abandoned the Paris Climate Agreement, he dropped the legacy of his predecessor Barack Obama, destroyed Obamacare without giving anything in return, and now “plays the same game” with Iran’s nuclear deal.

What did trump do? Destruction.

“The West, which we once knew, no longer exists,” the analyst concludes. Germany’s relations with the United States "are not currently friendship, they can hardly be called even a partnership." President Trump behaves defiantly and speaks in a tone that "ignores seventy years of trust." Is there cooperation in economic, foreign and security policy between Europe and the USA? Brinkbeumer responds: no.

Analyst proposal: Europe should avoid Washington's provocations until peace comes after Trump. Perhaps the EU will have to find ways to protect its large companies. Moreover, Europe "must try to force the United Nations to take action, even if it turns out to be symbolic, given that the United States has veto power in the Security Council." True, "triumphant anti-Americanism" is dangerous. But submission to America is a road to nowhere.

“Smart resistance” is needed, the author sums up. Resist America!

And in this position, although not official, but newspaper, the Germans are also moving closer to the Russians, who do not welcome the expansion of Washington and the American Gopnik policy in the international arena, violating the principles of law.

As for the above intractability of the Frau Chancellor about the military budget, Mr. Trump, apparently, still managed to convince her to put more Euro into the NATO wallet.

Angela Merkel said that her country would strive to fulfill its obligations to the North Atlantic Alliance, including increasing military spending. According to the latter statement Frau Chancellor, NATO's requirements for investing 2% of GDP in the defense budget "reflect" the tense situation in the world. Willingness to spend 2% Merkel explained that the German army still needs to restore weapons and equipment after years of cuts in defense spending.

Previously, the German government consistently refused to comply with the NATO requirement for spending at least 2% of GDP for "defense" purposes.

As you can see, here at Trump and Merkel, the goal is the same: to contain Russia. Hence the single position on sanctions.

Nevertheless, political maneuvering and state flexibility allow the Frau Chancellor to preach the idea of ​​peace and cooperation with the Russians, especially in the gas sphere. Therefore, any aggravation of relations with Washington because of the quirks of the politically unstable Donald Trump will play into the hands of Russia.