The problem of migrants. Soldiers for Russia

18 May 2018
205
We graduate from high school and in deaf villages
Scatter to distant lands.

You will go to the reindeer,
I'll leave for hot Turkestan.

I will see the blue river
And, yielding to the requirement of years,
I will love a beautiful Uzbek,
And you will love Samoyed.
A. Berman, “Spring on Zarechnaya street”

What caused the mighty Roman Empire? Only from the fact that Roman women have ceased to give birth in abundance of children of both sexes. And this attack happened to them? Yes, because the Romans liked the taste of wine, which was stored in lead vessels, the hair of "metallic color" (and they dyed them, combing them with lead combs), and the water came to their houses through lead pipes. As a result, a massive reduction in the population, since lead poisoning affects primarily the copulative sphere of the body ... That is, there are no men, no more soldiers, and slaves and mercenaries are not an army! 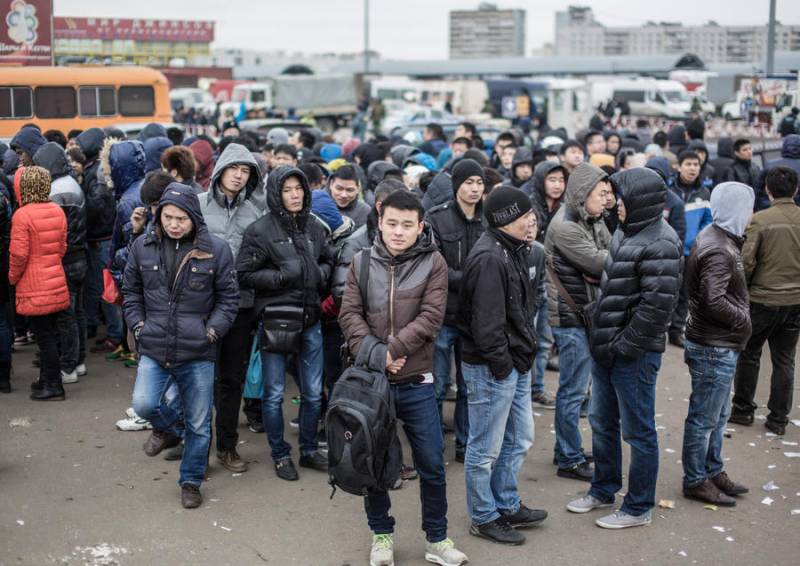 Why Japanese samurai could not reflect the expansion of European powers and the United States? Yes, simply because in the 250 years of their domination, they simply degenerated. And why? Yes, because the Japanese - the wives and concubines of the samurai whitened the face and chest with whitewash based on mercury. And babies licked mercury along with mother's milk. And again, the reproductive sphere was damaged ... It was necessary for the samurai to support their kin, to adopt the children of peasants and merchants en masse. Here are just those still held. Of course, individuals among them met. But in general, they could not already properly respond to the challenges of time. That changed their shopkeepers and traders, women whose etiquette did not order whitewash.

Well, what processes took place in our country? I was born, for example, in the 1954 year and lived in Penza on Proletarskaya street. And so, if we consider only “this” side of the street (the opposite “side” was unfriendly with us), then from one end “of this side to the other, including our end of Mirskaya Street, with the guys of which we knew, The following picture: 19 houses, in which many families lived, but there were only 11 children - boys of about the same age and 1 (!) girl. And only in one family was 2 child-boy. And now think again: 19 houses and 12 children, and only 2 child in the same family! So the decline in the population of the USSR began not at all under Gorbachev, but practically shortly after the war. Moreover, one must think that something similar was happening in other places. And the growth that took place in our country in those years was carried out at the expense of ... well, of course, at the expense of the peoples of the Caucasus and Central Asia.

Now let's see how many of these 11 people dropped the children. For all I will not say, but those whom I know, also had only one child. I have one child, my child has one child ... Meanwhile, how well known is that in order to reproduce the population, it is necessary for the family to have three children!

After completing my studies at the institute, my wife and daughter went to work in the village to “work out” free education. In principle, we could have stayed there forever, but this would not change the demographics in any way. But the lonely “sentry”, of course, “yielding to the demand of years,” wanted to multiply, and for this it was necessary to get married. In the three years we have worked in this village, two young female teachers on 4 have entered into such marriages. Two worked only for one year and left, but the two remaining married their own students! One worked as a cattleman and had the nickname “Shamok”, and his wife immediately became “Shamkova Baba”. It was fun to watch him drive her to work in his dung cart in the morning ... standing up! Because she was dressed "in a city", with a briefcase, and could not sit down. So she was balancing in her like in a circus, yes, it was actually for all the village people that there was a circus! What they had in common, except perhaps of peasant origin and a bed, I still cannot understand. But the result is important - one child. With the second teacher everything was the same, but her chosen one at least finished the technical school and worked as a mechanic. And also everything was limited to one child, although later, when we lost sight of each other, well, maybe the second one appeared. But no more! 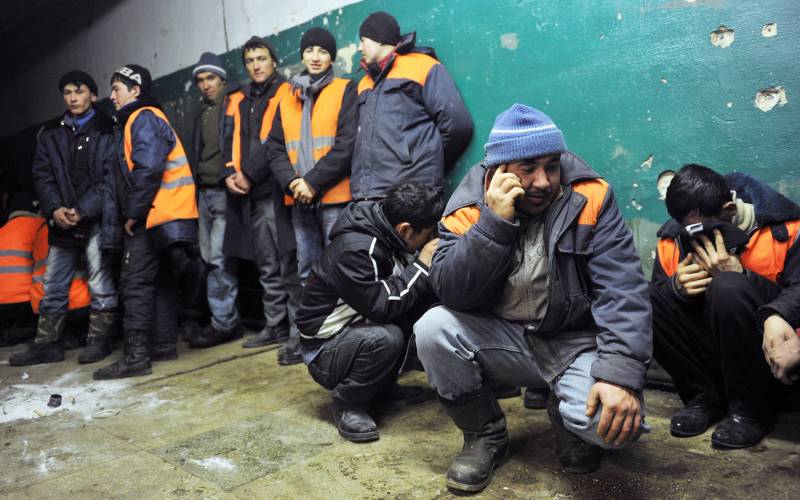 During the same three-year term, two teachers committed suicide, one of our students, who became pregnant by a “summer” chauffeur, and a former student who was ousted for drinking from an agricultural technical school. That is two people of reproductive age.

And now let's look at the current migration situation in the country. Let's start with our Penza University ... Today, representatives of 47 countries of the world study in it, starting with Turkmenistan and ending with Gabon. In the evening, on the second shift, when 50% light bulbs were extinguished in the corridors, or even everything, happened to be frightened: a white shirt and pants were going to meet, and there were simply no hands and faces. Most study in a targeted direction and must, must, return to their homeland. But those who study for their money, when asked about future plans, usually answer this way: “I want to go to Moscow, St. Petersburg”. By the way, a lot of girls study here, including girls from Turkey, Bangladesh, India, and one can not even talk about sunny Central Asia. And this, by the way, is good. Because with respect to other migrants the picture is completely reversed.

As a rule, men go to work for us. They in no way want to adopt our culture, to fit into a way of life, but only to “raise the dough” a little more and go back. Others, on the contrary, bring their women and children, and somehow fit into our lives. Slowly, with difficulty, however their children will go to our schools and will gradually become other people. However, among migrants it is still not prestigious to “become Russian”. Not prestigious! 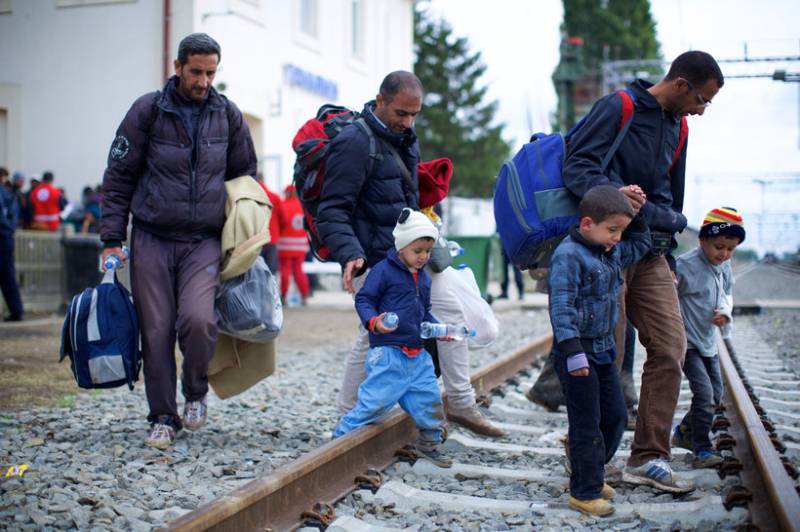 Meanwhile, the demographic situation in Russia is very specific. We have an abundance of women of retirement age with a shortage of women of the most reproductive age - 18 - 27 years. That is, according to statistics, everything is not so scary: there are many women. But from the gender and age point of view, they are sorely lacking.

That is ... you need to implement a well-considered migration policy in the country! And to invite to work not men, but women of childbearing age! Do you care who painted your apartment? Turkish man or Uzbek woman? It is important that it is well painted. And so almost everything. It is not at all difficult to compile a list of works to which, of the same sunny republics, it is possible to invite not men, but women of quite definite ages. Next, you need to provide them with the “conditions” of reproduction ... That is, that it would be beneficial for them to marry with the Russians, and for the Russians to marry the “women of the East”. For example, to issue a one-time allowance for arrangement, since “she has no roots”. A child born to her in Russia should automatically receive Russian citizenship, but if she wants to take him back, “home,” then for depriving Russia of her minor citizen, let him pay, say, 10 thousands of dollars. She thinks of such money, of course. And we - an extra citizen or citizen!

How to provide this? And this is how: in every country - “a potential human resource investor”, open the “Russian house” and let local Russians working there, show that we eat, drink, what they wear, what books they read, how much they earn ... So that the local aborigines could see that being Russian is prestigious! So that already from childhood, the idea to go to Russia and arrange their lives there was born in their hearts. Naturally, the “prize money” for educated migrant women should be greater than for simple “workers”, which will also encourage the educated part of their population to come to us, well, let the shepherds stay with themselves. That is, there must be an incentive for A to come to us - women of childbearing age, and B - so that among them were not just women, but also a sufficient number of women with education. 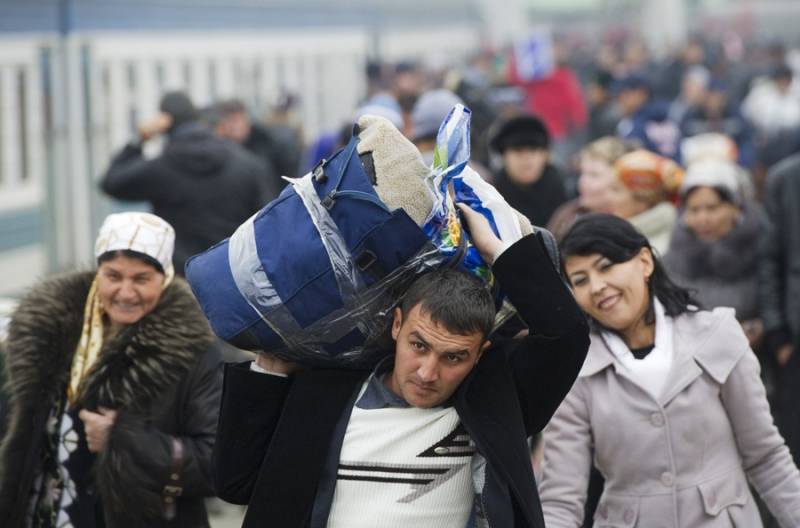 It is important to keep in mind one more circumstance. Crime! Among migrants, it is there, but ... again, it is important what its structure is. As a rule, in addition to purely immigration offenses, to the share of which gives the main number of illegal actions, the “people from the East” who come to us for work commit them twice. The first time you cross the border. That is, "they are driving." What is being transported is well known! And for what they drive it is known too - to create for the first time a “safety cushion”. Then they sit quieter than water below the grass. Families need to be fed at home! But here before them the departure is looming, and the 1-2 of the day before it is the most criminal. He went to the park, took a couple of mobile phones from the boys ... and to the homeland "with things." No one will catch up and catch, and then everything will be in a new way.

With women will not be so. And they will carry less ... and, most importantly, upon departure, the level of offenses will decrease by several times. But in the end ... as a result, we will have more people and children, but also workers and soldiers, and the tax base will grow!

Ctrl Enter
Noticed oshЫbku Highlight text and press. Ctrl + Enter
We are
A great interview with Sergey Lavrov: about Ukraine, Obama and IranWhat you didn't want to know about England
Military Reviewin Yandex News
Military Reviewin Google News
205 comments
Information
Dear reader, to leave comments on the publication, you must sign in.