15 May 2018
44
An important advantage of the promising fifth-generation Russian nuclear submarines of the fifth generation of the Husky may be a relatively low cost, experts say. At the same time, the price of boats can compete with the technical characteristics of submarines for the title of the main advantage. Already, it has been suggested that new submarines will be significantly cheaper in cost than the Yasen-M project boats currently under construction. For the Navy, this is especially true, given the fact that in the composition fleet new submarines will have to replace all third-generation multipurpose boats, including project 949 Antei submarines (a “city” series of boats, namely the tragically lost submarine K-141 Kursk) and project 971 Schuka-B, which are quite numerous.


Information about the boats of the Husky project is currently extremely limited. It is known that the draft multipurpose nuclear submarine with cruise missiles (PLARK) 5-generation engaged in SPMBM "Malachite", information about it first appeared in the Russian media in December 2014 years. At the same time, it was reported that the development of a new submarine is being carried out on its own initiative, without a technical task from the Russian Defense Ministry. July 17 2015, the Russian media was told that the new boat designed by designers of "Malachite" on the same base platform, but in two versions: a multi-purpose submarines, focused on the fight against the enemy submarines and PLARK focused on the fight against enemy aircraft carriers.

8 August 2016, there was information that between the Ministry of Defense of Russia and SPMBM "Malachite" was contracted to develop a promising submarine. Apparently, we are talking about research work to develop the appearance of a future nuclear submarine, and the technical design of the submarine will begin only after 2020 year. Experts believe that the anti-version of "Husky" were armed with "Caliber" anti-submarine missiles, this boat in the first place, will be intended for the destruction of strategic submarines potential enemy (submarines "Ohio" and "Vanguard"). The second option will receive anti-submarine hypersonic cruise missiles "Zircon" and is designed to destroy large enemy surface ships (aircraft carriers, UDC, landing craft, missile cruisers, destroyers, and others.). 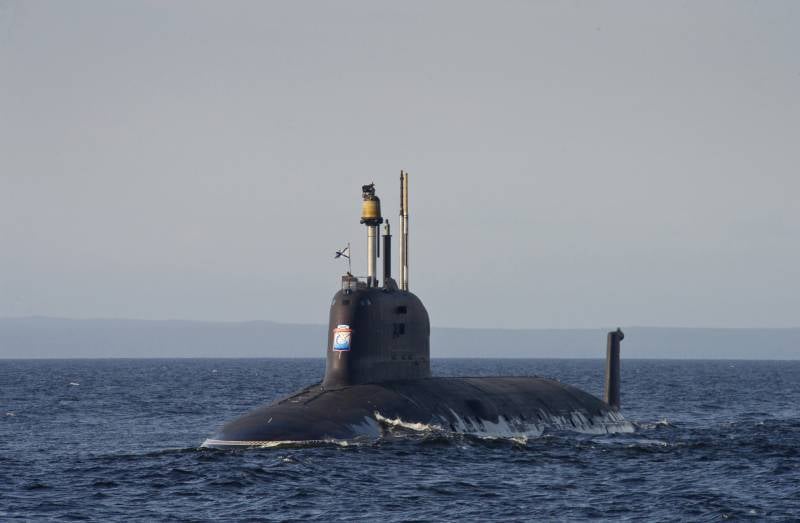 Multipurpose submarine project 885 "Ash"
The lack of information about the boats of the Husky project is currently not surprising, given the fact that research on the project is still underway and even the appearance of the future submarine has not been fully determined. The boat exists only in the form of sketches and renders, but some of its features are already little known. For example, it has already been reported that the Husky submarines will receive a double-hulled structure, the submarine displacement will be about 12 thousand tons (Yenya has 13 800 tons). In size, the promising boat will be smaller than the Yasen-M generation submarines of the 4 generation being built today.

Submarine 5-th generation will have even less noise than fourth-generation boats, which include multi-purpose submarines "Ash" and "Ash-M." The hull of the boats will be built using modern composite materials. Multi-layered boat designs will have to reduce reflections of enemy sonar signals and help reduce the weight of the submarine. Most likely, all boats will receive new means of communication, they can be integrated into a single network. Along with the Yasen / Yasen-M submarines, the new Huskies will become the main means of the Russian fleet in countering the American Airborne Assault Groups (AUG).

It is expected that research and development work on the project can be completed by the end of 2018. By this time, a preliminary design will be completed, after which the boat developers will be able to proceed to the technical design. Previously RIA News referring to the deputy commander-in-chief of the Navy for armaments, Vice Admiral Viktor Barsuk, reported that the laying of the first multi-purpose submarines of the new generation (the Husky project) could take place in the final part of the adopted State Armaments Program for the 2018-2025 period. Viktor Barsuk called the indicative date for laying a promising submarine - 2023-2024 years. He made the corresponding statement in Severodvinsk at the end of July 2017, where he flew to the groundbreaking ceremony of the new Ulyanovsk nuclear-powered icebreaker. 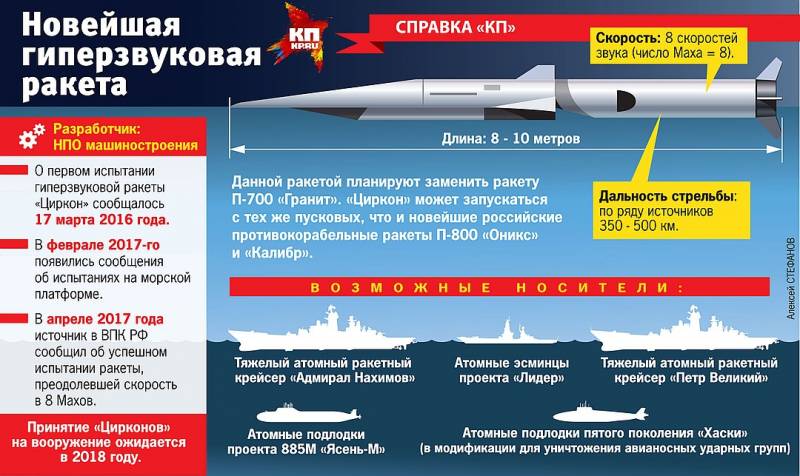 The main factor in increasing the combat effectiveness of the Husky submarines is that they are equipped with a new missile system with a hypersonic Zircon cruise missile 3М22. This complex was successfully tested in the 2017 year, during which the rocket reached speeds up to 8 Mach. Missiles that move at a speed that is very difficult to monitor and intercept, respectively, as it has time to come to the target since its radar detection. At the same time, it is three times faster than the previous generation anti-ship missiles. For example, the P-700 Granit anti-ship missiles or the Onyx P-800 anti-ship missiles could reach speed in Mach 2,5. It is also reported that the submarines of the project "Huskies" will be able to carry cruise missiles "Caliber", the effectiveness and combat capabilities of which were tested and confirmed in an armed conflict in Syria.

Recently rented by the Malachite design office renders allow judging how these solutions will be implemented in the design of the new submarine. The presented photographic materials show launchers located in the middle and fore part of the boat. In particular, 8 visible open covers in the middle part of the submarine hull. According to experts, the 40-48 missiles will be located here, since the analogous design of launch containers on the Yasen multi-purpose submarines accommodates 4 to 5 missiles depending on their type.

Another shock opportunity for new submarines can be the use of various unmanned submersibles. Some sources even reported that the Husky submarines would carry the 6 Status torpedo. And Oleg Vlasov, who is the head of the Malachite robotics department, said that the new boats will be integrated with systems operating in the airspace, that is, the submarines will be able to launch UAVs for reconnaissance and search for targets. It is also believed that the torpedo tubes on the forward-looking boat will be located in the middle part of the body, as it has done on submarines project 885 «Ash", while in the bow will be located various sonar equipment and launchers for cruise missiles. 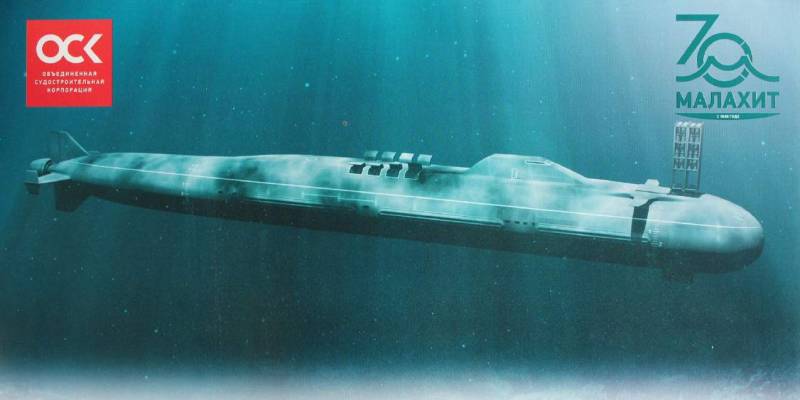 Possible appearance of promising multi-purpose submarines of the Husky project
Also in the Russian media is widely noted incredibly low acoustic visibility of future boats, the design of which will be widely used composite materials. In addition to this, it is assumed that the newest technologies will be introduced on the “Husky” boats, aimed at reducing acoustic visibility and noise. According to Viktor Barsuk, the new submarines are expected to be twice as quiet as the boats of the previous generation.

For some, the appearance of the new submarines of the Husky project may seem superfluous, since the construction of multi-purpose nuclear submarines of the Ash project has been launched in the country, but the progress and development of technologies are not standing still. The addition of hypersonic cruise missiles to the arsenal of submarines, the integration of robotics, an increased level of automation of work, a significant reduction in noise (if the stated values ​​are achieved) significantly increase the combat effectiveness of the new project boats.

Earlier it became known that when working on a multi-purpose submarine 5-generation "Huskies" used a huge experience gained in the development of boats projects 671, 971, 885 and their various modifications. And in March 2018, the Malachit St. Petersburg Marine Engineering Bureau completed work on creating an advance project for the HUSKI 5 generation submarine, after which the process of discussing the project with representatives of the Russian Navy began. As noted by the General Director of “Malachite” Vladimir Dorofeev, in addition to the technical characteristics, the new project should be different and the economic component. “Our ships should become not only more powerful, but also cheaper” - the general director of the company developing the promising boat emphasized.

Ctrl Enter
Noticed oshЫbku Highlight text and press. Ctrl + Enter
We are
Russian Navy. A sad look to the future (part of 2)Why do Americans "drown" our submarines?
Military Reviewin Yandex News
Military Reviewin Google News
44 comments
Information
Dear reader, to leave comments on the publication, you must sign in.