18 May 2018
7
May 18 (new style) in 1703, a Russian detachment of 30 boats with infantry under the command of Peter the Great and A.D. Menshikov boarded the Swedish ships. Having the advantage in the form of artillery, the bot Gedan and the sloven Astrild could not use it, and were taken as trophies. Almost three centuries later, the day of this victory was declared a holiday in honor of the founding of the Twice Red Banner Baltic fleet.


At the beginning of the 18th century, Russia was at war with Sweden, and the created Baltic fleet played a crucial role in it. The construction of new shipyards and bases ensured numerous victories at sea and on the coast. With the help of the fleet, our country was able to regain access to the Baltic Sea, and the Baltic Fleet itself became the basis of the nascent Russian Navy. After a few decades, the Baltic seamen had to participate in the new war with Sweden, and also help the army during the Seven Years War. 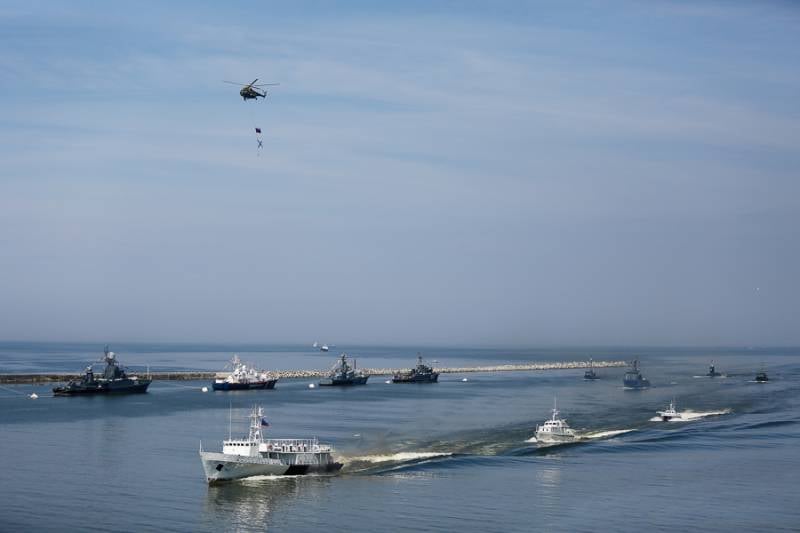 The main event of the XIX century for the Baltic Fleet was the Crimean War. He was assigned a special task of protecting the capital from enemy ships. The enemy repeatedly shelled the fortress and the base of the fleet, but was never able to reach St. Petersburg. Shortly after the end of the Crimean War, the Baltic Fleet began to receive the newest steam ships. For several decades, there has been a cardinal renewal of the fleet with significant qualitative growth.

By the beginning of the 20th century, the Baltic Fleet had two and a half hundred ships and vessels of various classes, including the most modern combat units. During the Russo-Japanese War, the Baltic Fleet formed the Second Pacific Squadron, which made a unique transition to the Far East and accepted the battle. A few years after that, a new shipbuilding program was launched, on the results of which the Baltic were to receive a large number of the most modern ships.

With the beginning of the First World War, the Baltic Fleet took upon itself the defense of the Gulf of Finland and other water areas. The ships fought the enemy’s presence in the protected areas and also assisted the ground forces. During the Civil War, the hastily formed Acting detachment of ships assumed the blows of the interventionists. Meanwhile, coastal troops and the crews who had been forced off the ships fought on land.

In the interwar period, the fleet was again modernized. With the new ships, bases and other objects he had to enter the Great Patriotic War. Again, the task of the fleet was to protect the Baltic Sea and the Gulf of Finland in order to prevent the enemy from approaching Leningrad. In addition to the main part of the fleet, several lake flotillas were formed. During the war years, the fleet operated in difficult conditions and suffered significant losses, but it was able to solve a number of critical tasks.

In 1946-55, the single Baltic fleet was divided into two independent unions. At the same time, both fleets received new ships and a fundamentally new weapon. The emergence of new technology allowed the fleet to begin work not only in the Baltic Sea and north of Europe, but also in remote regions such as the Mediterranean and even the Indian Ocean. By the early nineties, before the unfortunate events, the Baltic Fleet of the Soviet Navy was the largest force in its region.

The collapse of the Soviet Union and subsequent events struck the Baltic Fleet, but it was still saved. At the first opportunity, its development resumed. In recent years, numerous coastal sites and bases have been updated and reconstructed. They have been handed over to the fleet or new ships and ships of various classes are being built.

The next Day of the Baltic Fleet is optimistic. The modern Twice Red Banner Baltic Fleet - through 315 years after its foundation - is once again a real force capable of showing the strength of Russia both near its bases and in the remote seas. The editorial staff of the Military Review congratulates all veterans, military personnel and civilian personnel of the Baltic Fleet!
Ctrl Enter
Noticed oshЫbku Highlight text and press. Ctrl + Enter
We are
Ships of repair, reserve and conservation of the Russian NavyShips excluded from the Russian Navy after 2000 of the year
Military Reviewin Yandex News
Military Reviewin Google News
7 comments
Ad