15 May 2018
182
Russian hypersonic anti-ship weapon the new generation may be a decisive argument in favor of the refusal of the Russian Federation from its own carrier fleet. 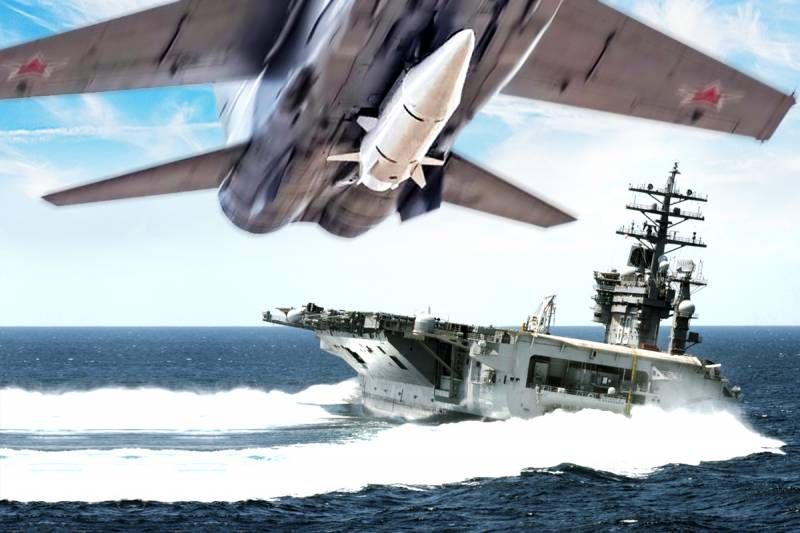 The first access to the sea for sea trials of the second Chinese aircraft carrier, which took place on May 13 this year, inspires mixed feelings. Firstly, this is a sense of respect for the truly great Chinese people, who managed to arrange the almost conveyor release of these complex warships in the shortest possible time. historical deadlines. The first aircraft carrier, completed from the Soviet Varyag purchased in Ukraine in 1998, was delivered to the fleet in 2012, and the second was actually built from scratch at a Chinese shipyard in four years! Moreover, there is reason to believe that for the Chinese this is far from the limit of possibilities. And in the near future they will "bake" their aircraft carriers literally like pies.

Secondly, it is, of course, a sense of pride in the highest level of Soviet military shipbuilding, the projects of which even after almost 50 years were not outdated at all and were built by the Chinese as the basis of their first aircraft carrier. I say this with full confidence. Because ambitious China, intending to no less than surpass the United States in economic and military power, would never have laid in the foundation of its shipbuilding program deliberately outdated projects that automatically make it a second-rate country.

Moreover, I suspect that the next Chinese aircraft carrier, which is conceived as a full-scale, classic competitor to American giants, will be painfully familiar and will look like one of the draft designs of Russian design bureaus already presented to the public. Type the same aircraft carrier "Storm".

And finally, thirdly, this feeling of annoyance, understandable for any patriot of Russia. Who sees how in the neighboring country the most large-scale naval projects, obviously having Russian roots, are being successfully implemented, whereas in the RF itself they have great difficulty, and even almost in perpetual repairs, one aircraft-carrying cruiser. And the construction of new ships of this class for twenty years can not advance further turbulent newspaper discussions.

However, all of the above is inspired by the feelings, that is, the emotional perception of the new Chinese success against the background of our own endless slips.

And now let's assess the situation with aircraft carriers, so to speak, sober, without essentially irrational emotions.

Question one: does modern Russia have the necessary scientific and design base for building such ships? Answer: certainly has. Accumulated experience has not disappeared without a trace. Experts are still alive, who probably managed to pass on their unique knowledge to the new generation of designers. In addition, the specialized Russian design bureaus fully preserved not only the design documentation for the combat units already built, but also a huge, truly inexhaustible creative reserve for the future. Successful overhaul with the modernization of the Indian aircraft carrier "Vikremaditya" (former "Admiral Gorshkov") clearly demonstrated that they managed to preserve not only the Soviet "know-how", but also practical skills for implementing such projects. And at the level of large production teams.

Question two: Does Russia have shipbuilding facilities to build an aircraft carrier fleet? Indeed, in the USSR, aircraft carriers were built only in the now “independent” city of Nikolaev on the Black Sea. Fully sure this is a solvable problem. Even on the sites of currently existing shipyards, subject to their minimal reconstruction. With the commissioning of the shipbuilding giant, the Zvezda plant in the Far East, capable of building ships of almost any tonnage and complexity, this problem will become completely irrelevant.

As for the availability of state funding for such projects, one should not forget that only one percent of Russian billions invested in American securities will be more than enough for the planned construction of an aircraft carrier fleet.

The third and most important question: why then Russia does not build aircraft carriers? Moreover, the experience of the same China, which rushed in pursuit of the United States in this field, seems to speak in favor of the undoubted need for such ships as part of the Russian fleet.

However, we will not rush to conclusions. China, like the US, has an export-oriented industrial economy. Plus, the national economy of China is even more than the United States depends on stable imports of energy and various kinds of raw materials. Moreover, such imports, in their largest part, go precisely by sea. Therefore, reliable protection of maritime communications for China is a matter of national survival. And to save on the construction of aircraft carriers there just will not. US motivation is even more primitive. They just control most of the planet today. And in order to preserve this domination, they need to keep in their hands the world ocean. From here and aircraft carriers.

Russia differs significantly from the two mentioned powers. First of all, its absolute raw material self-sufficiency. She absolutely does not need to swim over the oceans to bring from there what she herself does not have. The entire periodic table is present in the Russian Federation in practically inexhaustible quantities. A country where it is more important to reliably defend its own vast territory, including its own raw materials bins, which have always been appropriated by many hunters. For this, aircraft carriers are in principle not needed at all.

But there is one more, so to speak newest reason for serious doubts about the feasibility of building huge floating airfields in the Russian Federation:

"Russian hypersonic aviation “Dagger” missile system is capable of making the American fleet defenseless, it is the main “killer of aircraft carriers” in the Pacific, writes The Diplomat magazine.
According to the publication, since 2018, the hypersonic Dagger missiles have become the main threat to US warships in the APR.
According to the expert, the Dagger is able to destroy with one blow even the largest enemy ship from a distance of 2 thousand kilometers.
The US military leadership has repeatedly expressed fears that Washington does not yet have the ability to intercept hypersonic missiles. The Diplomat article states that all of this has serious consequences not only for American territory, “accessible to Russian intercontinental ballistic missiles,” but also for the US Navy, “whose aircraft carriers and destroyers in the event of a conflict could be under water after being hit by the Daggers ".
Russian aircraft will be able to conduct American warships from a distance of 3,5 thousand kilometers from sea borders, the article says. ”

If we admit that hypersonic anti-ship weapons are really irresistible for the enemy, and there is no doubt about it, because their physical properties are just like that, it turns out that Russia, which has such a system of guaranteed destruction of enemy aircraft carriers, cannot but understand the whole measure of vulnerability and combat the unreliability of these ships. And this, you see, is a very bad incentive to invest fabulous money in their construction, For which, by the way, you can deploy additional tank the army. And for the surrender also double the Russian pensions.

As for America and China, it will be much more difficult for them to abandon their carrier-based ambitions. United States because they have already built everything. And these, in essence, archaic ships today form the basis of their military domination over all sorts of third-rate powers, of which basically the world consists.

And the Chinese, as already noted, first, in the simplest way, try to keep up with the United States. And secondly, it’s not for nothing that they gained the fame of the world copy-paste! Because they can basically only repeat what others have done for a long time. Before a full-scale understanding of the new military-strategic realities arising from the introduction of hypersonic weapons and, moreover, they did not reach the realization of these ideas in metal. And when they reach it, they may think about it: is it worth it in such a hurry to build ships that will even more quickly go to the seabed!

Ctrl Enter
Noticed oshЫbku Highlight text and press. Ctrl + Enter
We are
The tragedy of the American army ("The Atlantic", USA)Bashar al-Assad: In Syria, not the “revolution” that the enemies are talking about, but the revolution of the army and the people against terrorists
Military Reviewin Yandex News
Military Reviewin Google News
182 comments
Information
Dear reader, to leave comments on the publication, you must sign in.