As Russian officers, the soldiers were outsmarted. Knapsack


Probably, it is not a secret to anyone that pofigism of a soldier, that is, the ability to bravely overcome all the burdens and deprivations of military service, is no less a cornerstone in the army’s foundation than, say, understanding goals and objectives.

Moreover, it can be said that from the very beginning of time, when the army only appeared, in terms of the attitude of commanders and fighters, little has changed.

I am sure that even in the legions of ancient Rome, ancient sergeants in the same way drove the ancient soldiers. And they threw them scorpions in tunics, untied girths at horses, and so on.

Just without this in any way, judging by the millennia stories. A soldier is an organism that does not care much, because it is precisely because of this remarkable property that a soldier survives and wins.

But the main thing for whom the soldier doesn’t care, is the bosses (see above).

Who served, will not lie. That’s how any normal soldier will look at his direct and immediate superiors at any time. As a source, either nudyatiny, or as a threat to the prospects of digging from here to lunch.

And basically the soldier comes out the winner in everyday life. It is a fact. For inexhaustible his pofigizm and fantasy.

In particular - the Russian soldier.

Charter The Bible of any army, because without it nowhere. The charter is a fundamental document, which clearly and explicitly explains what, how and in what sequence a soldier is obliged to do if something happens.

The main problem in the 19 century was that the charter had to be printed on paper. And this really was a huge problem.

No, everything was fine with the paper in Russia. Released. And the statutes were printed on paper. But it turns out that they printed a little.

The tobacco content in the RIA was quite decent: 20 grams of fringe per day. And what is a smoke break for a soldier, I think it is not necessary to explain.

Generally, they talk about those times, in many memoirs it was noted that the Russian soldier is able to tempt anything. Regardless of the possible consequences, corporal punishment, the guardhouse and other “pleasures”, the statutes turned into smoke so swiftly that the command understood that something had to be done.

The result is this: 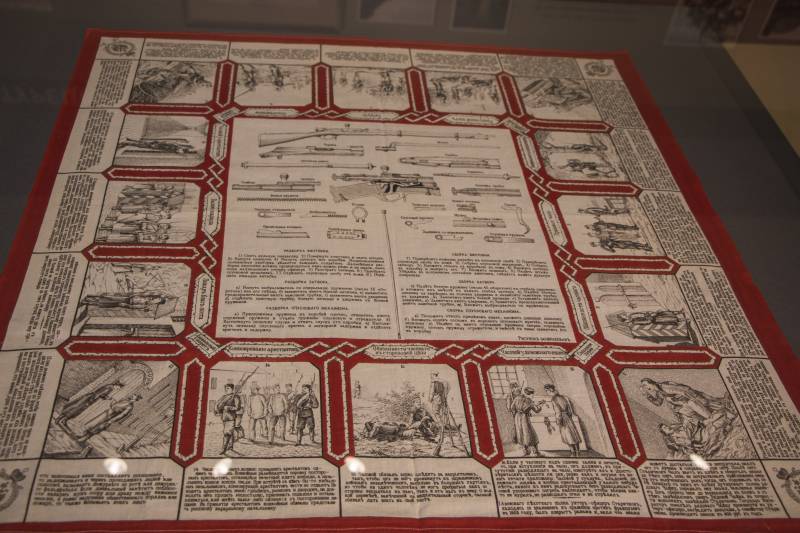 Cotton scarf size 60 x 60 cm, in the center - the text of the rules of assembly and disassembly of the rifle, listing its main parts. Drawn drawings and text by stuffing. 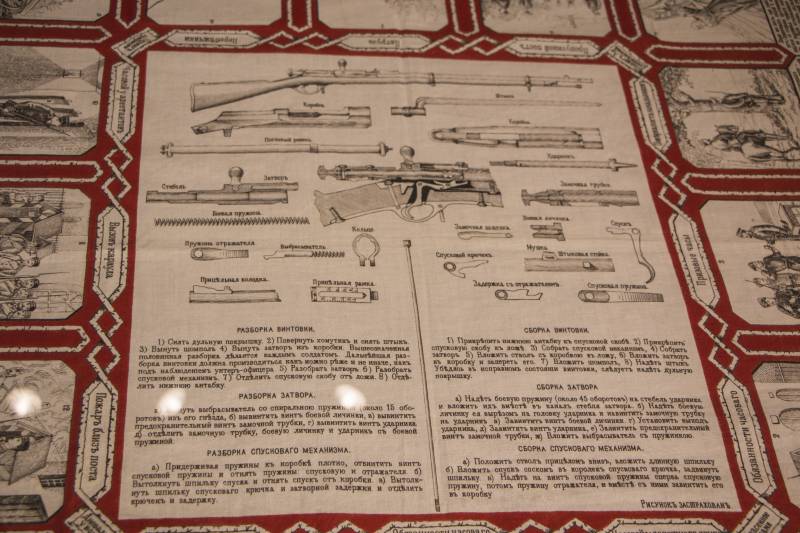 Along the hem (edge) of the headscarf - printed images of scenes of soldiers' lives and military exploits: 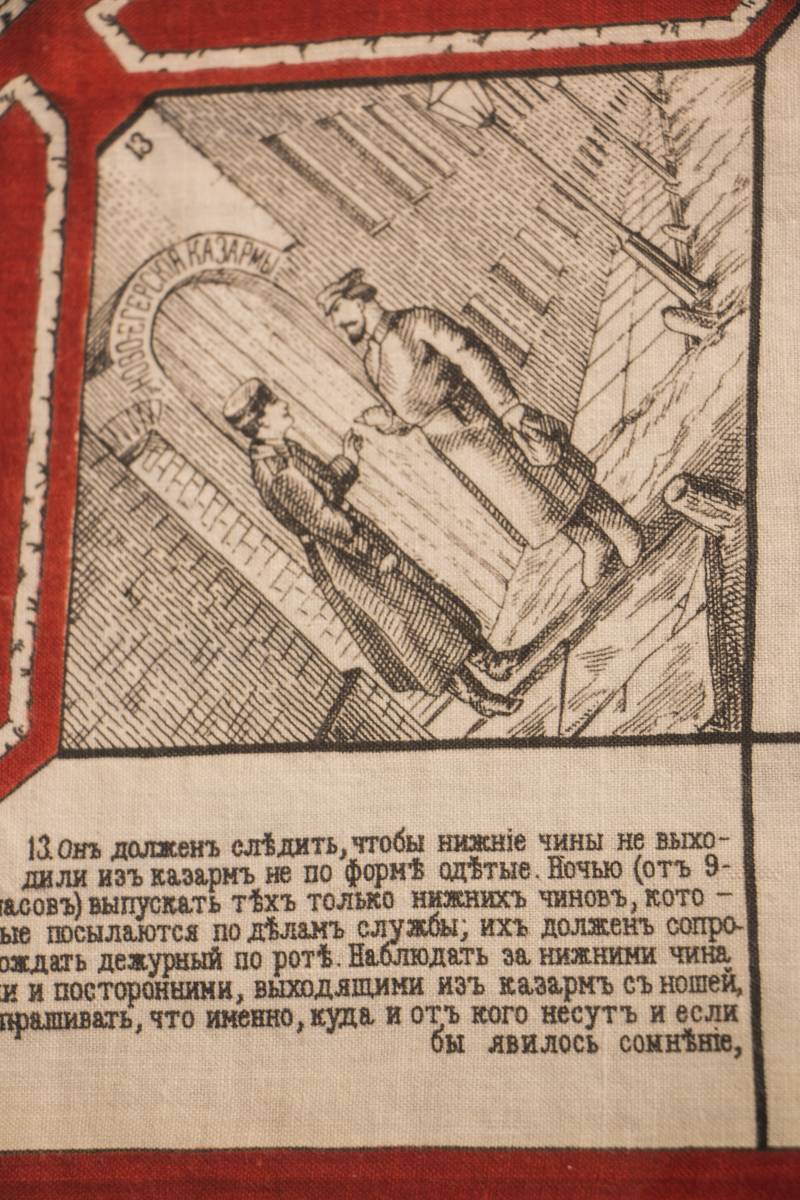 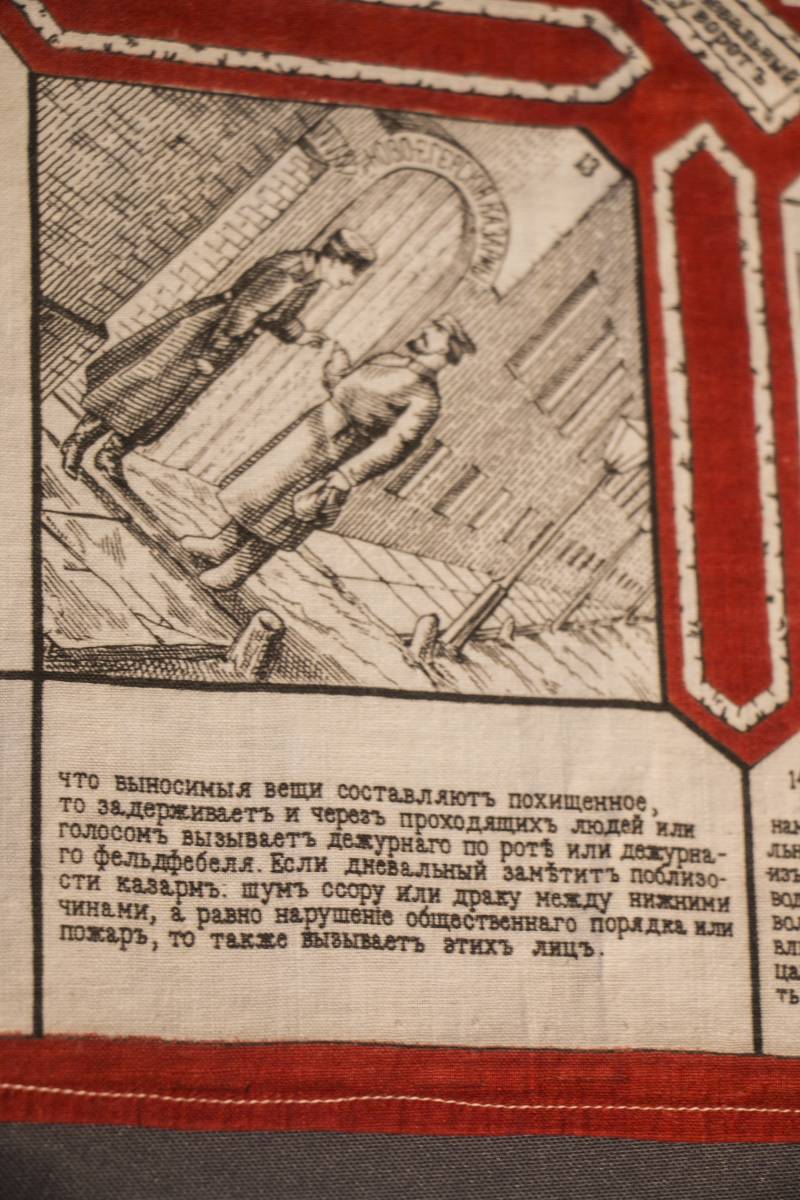 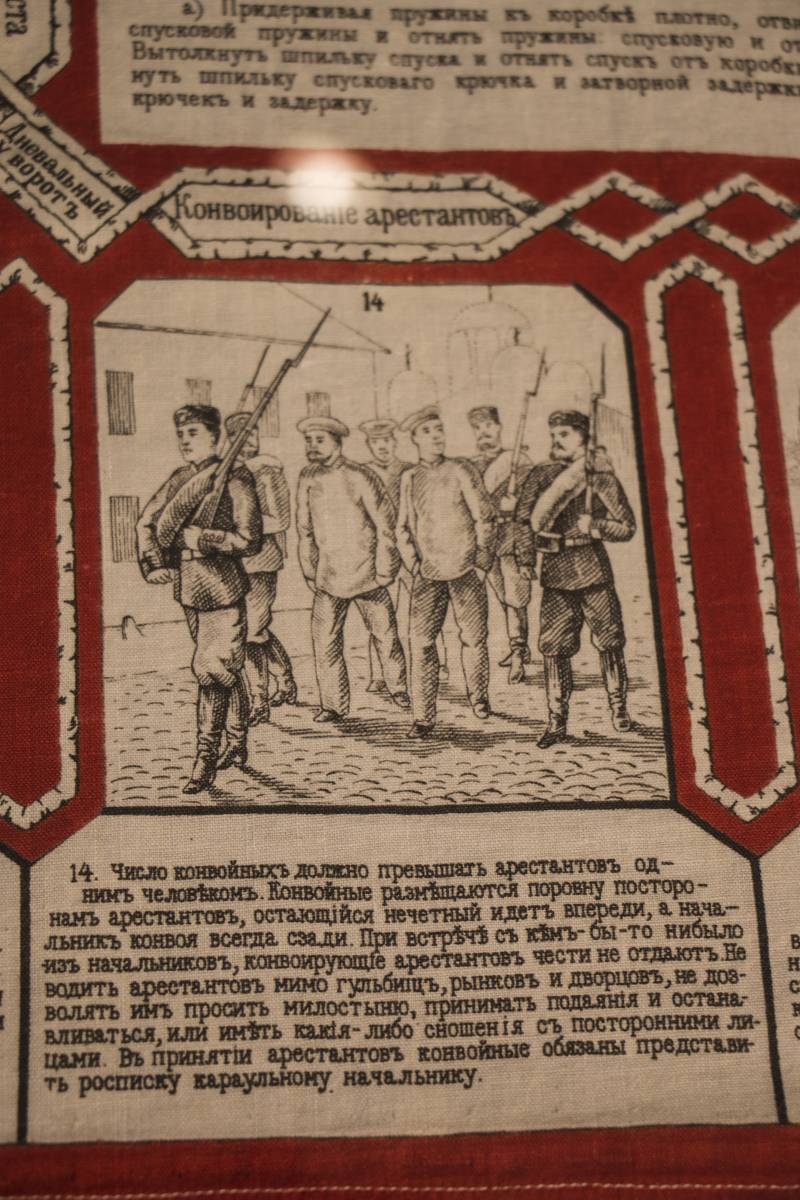 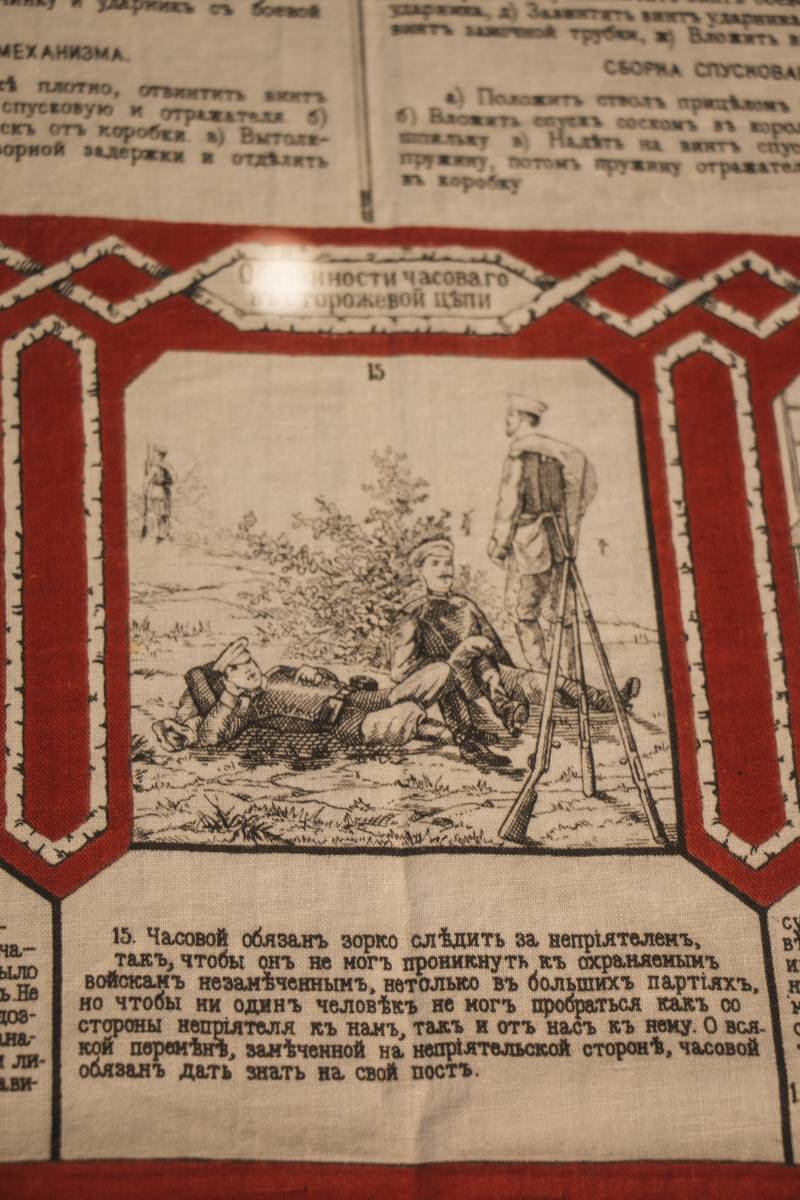 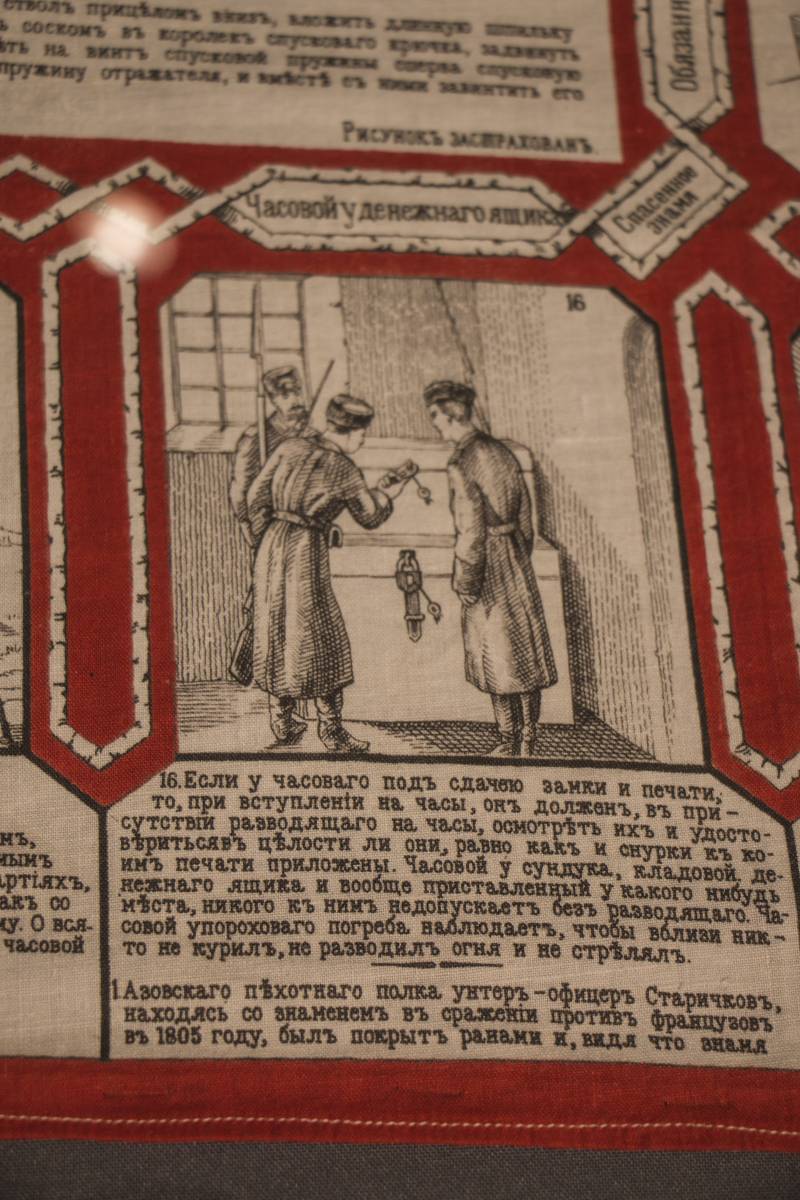 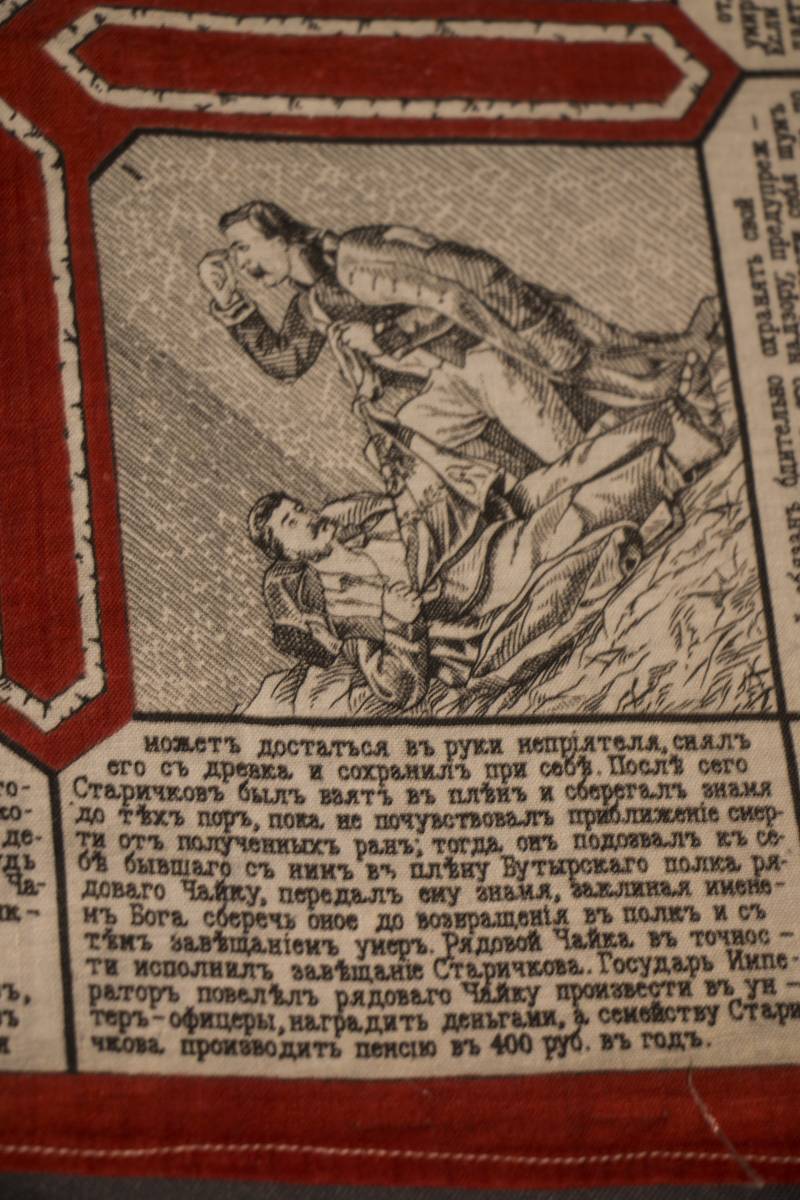 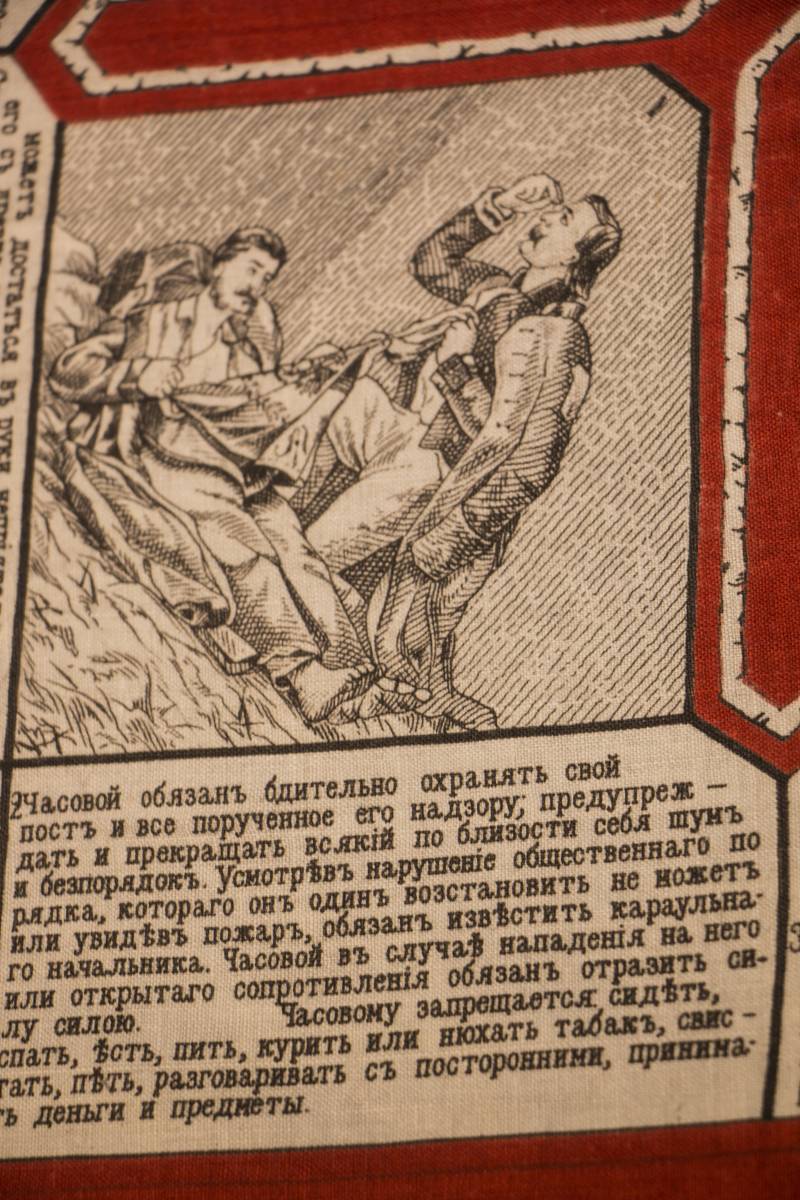 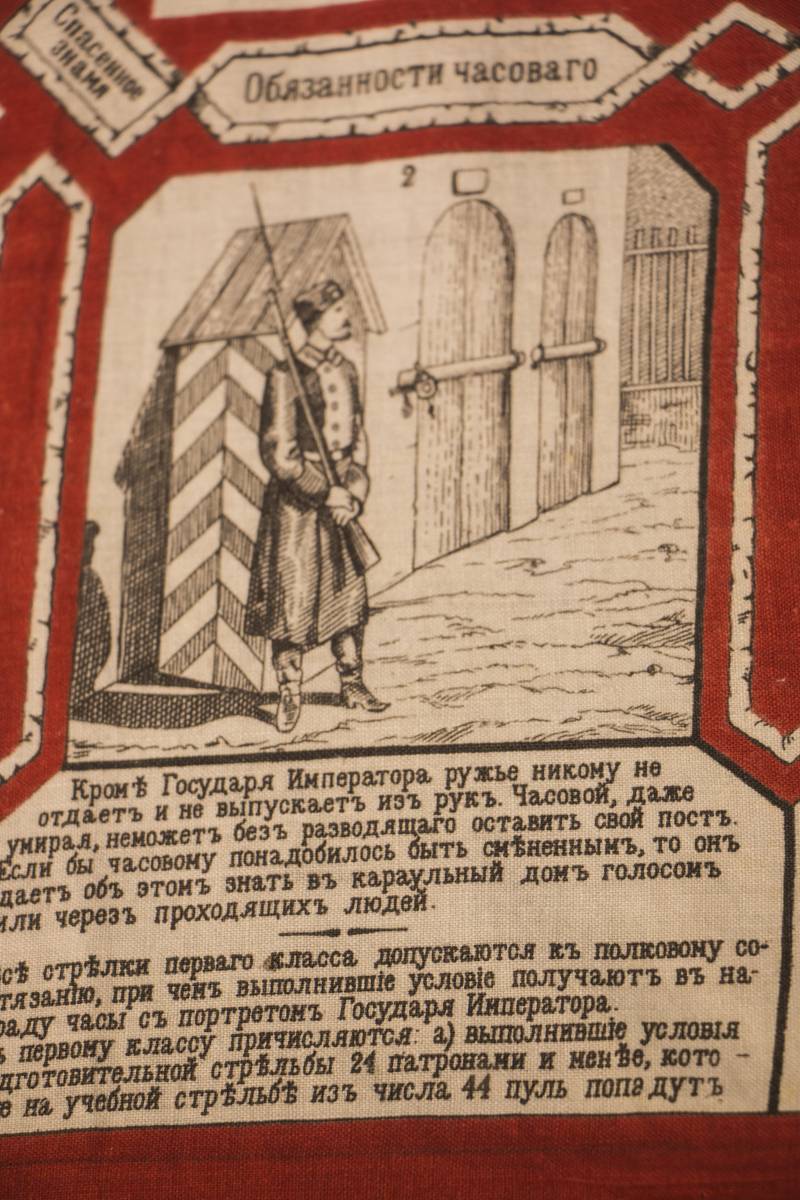 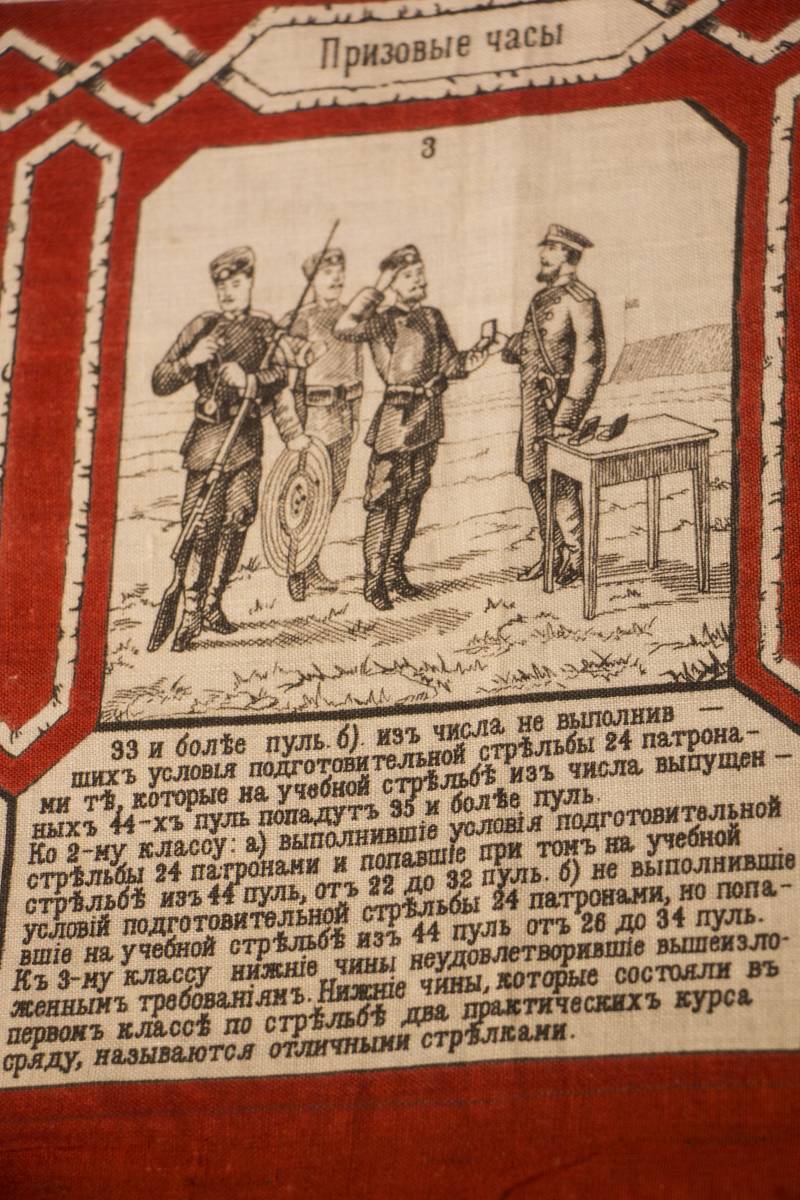 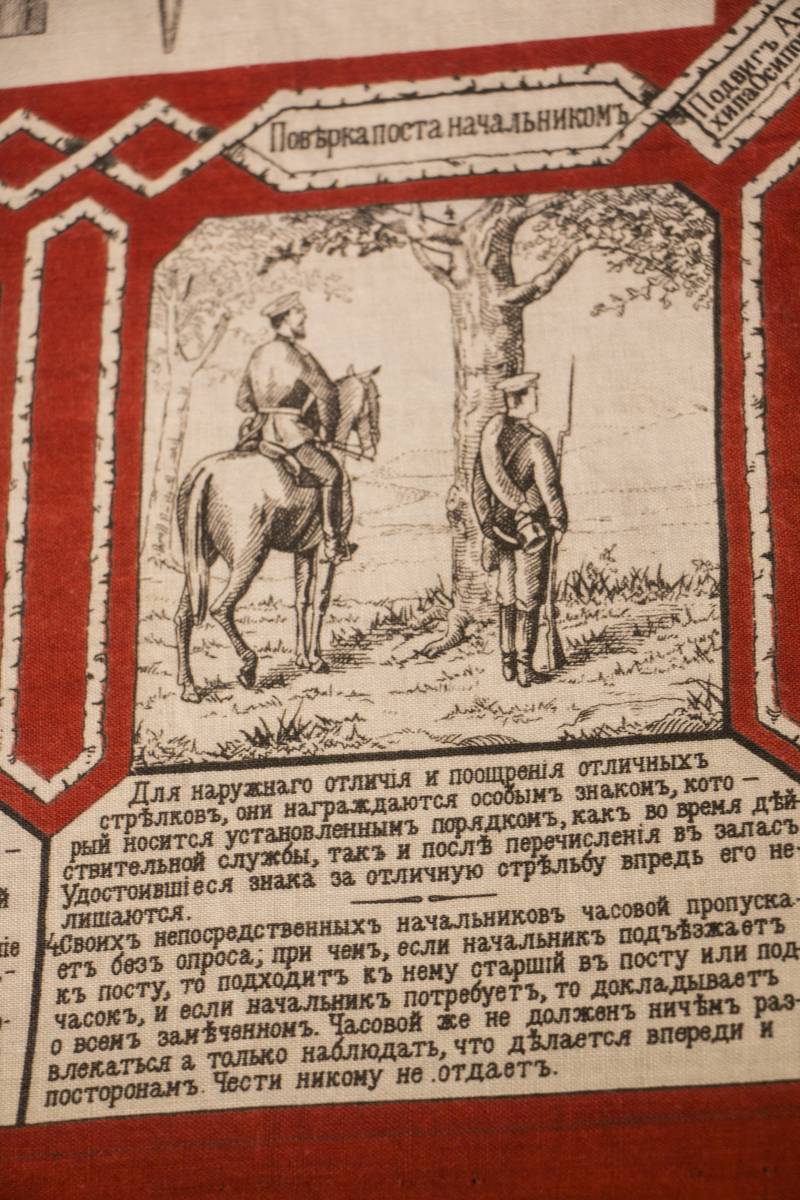 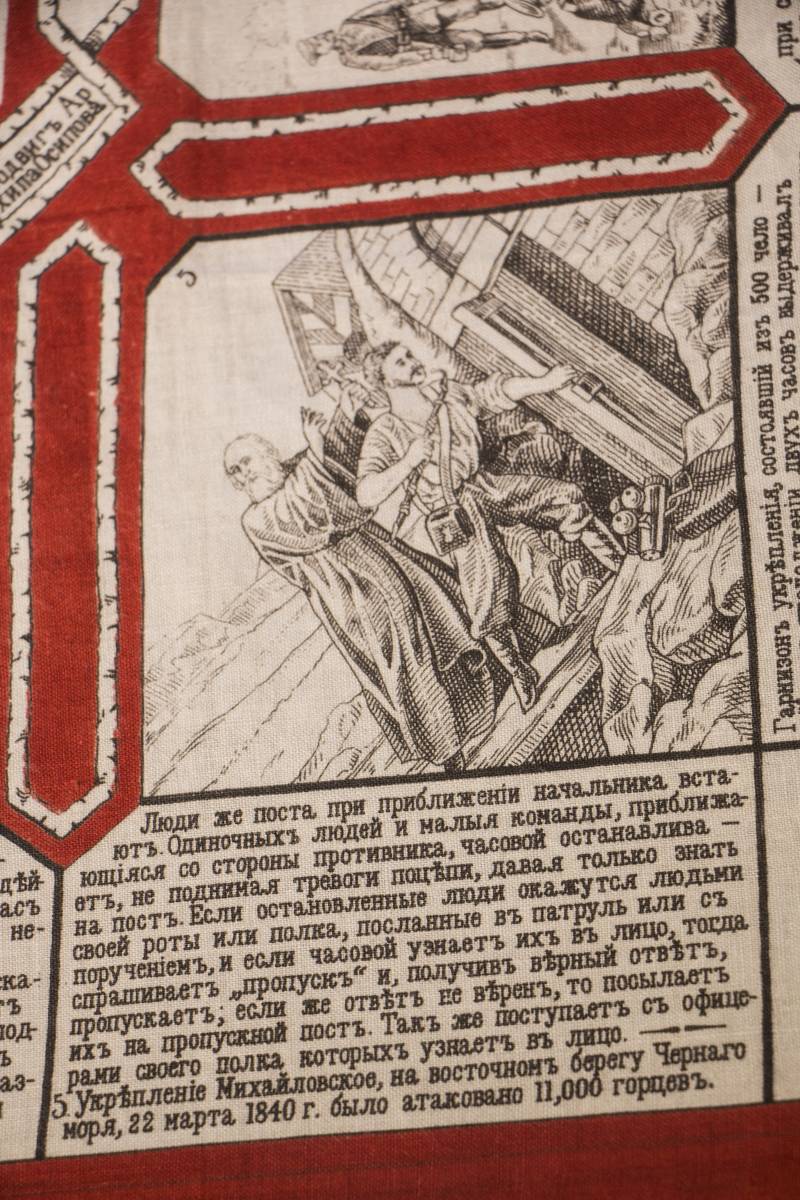 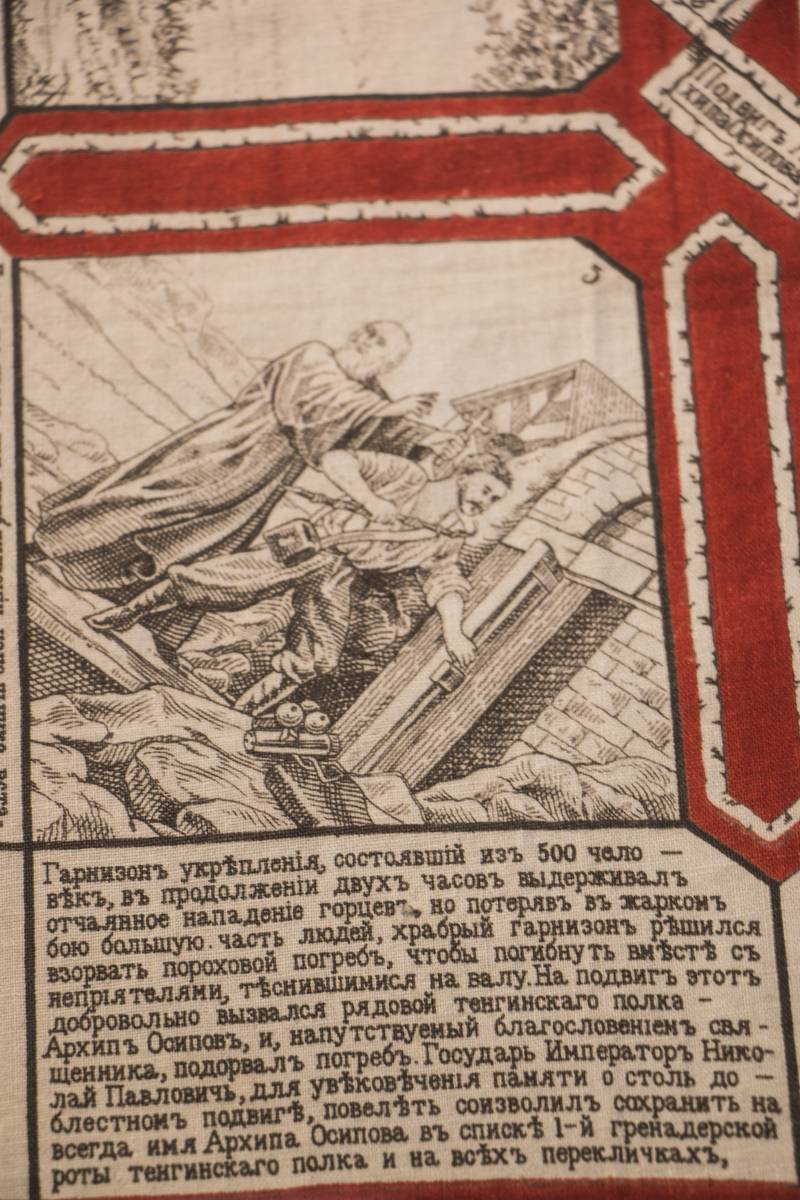 Who came up with such a move?

The magazine "Russian disabled" (in principle, the equivalent of "Military Review" in those years) in the 11 number from 14 in January 1884 of the year told that the lieutenant of the Life Guards of the Egersky regiment Kutepov and the second lieutenant of the same regiment Makarov developed a sketch of the "soldiers' handkerchiefs "(neck or neck, not said), which contracted to produce" well-known Danilovskaya manufactory ".

The idea, in fact, was not new. Similar scarves existed in other armies, appearing at about the same time. 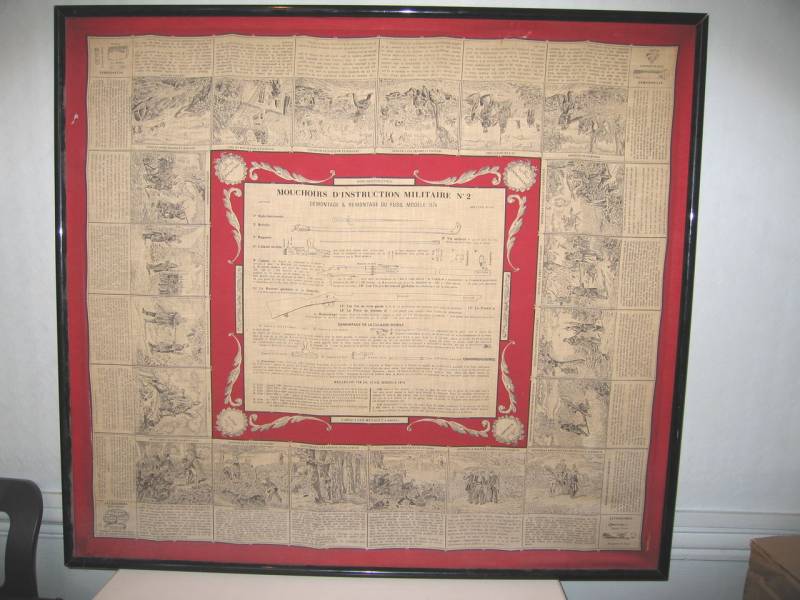 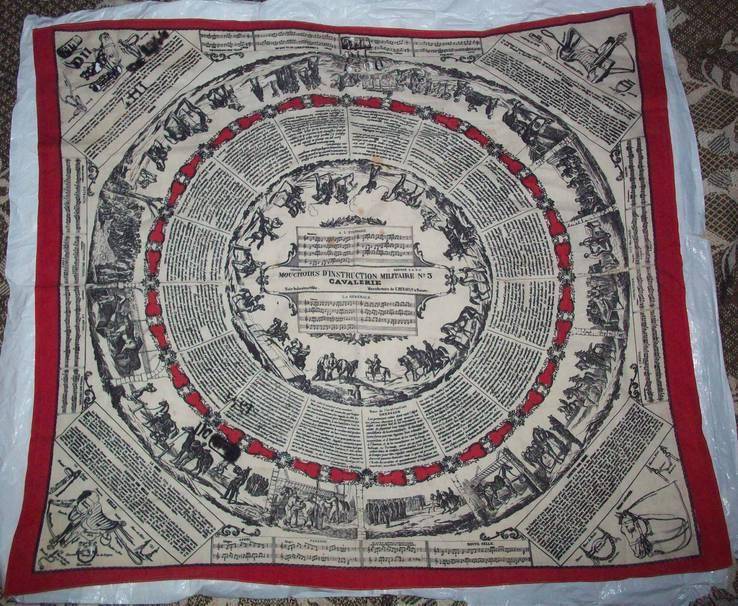 In RIA shawls settled down. Strange as it may seem for those times, but the initiative “took off”. First, the handkerchiefs could not be smoked. Secondly, the "paper" (as they called cotton) thing was not cheap thing. A soldier was allowed to take a handkerchief during demobilization.

About these shawls can be found even in the literature. Lieutenant A.I. Kuprin in "Military Stories" writes:

“Finally, with a sin in half, the recruit manages to repeat the words of the corporal. Lemaschak feels tired. He wipes his face and neck with a calico, on which the assembly and disassembly of the rifle are printed, and silently walks back and forth along the windows. The recruits still sit motionless, stretching his arms along the knees, and watching, turning their heads, behind the figure of his teacher. "

The main thing here is to be literate.

It is clear that the scarf could be lime, drink, exchange, but ... An interesting piece of history. 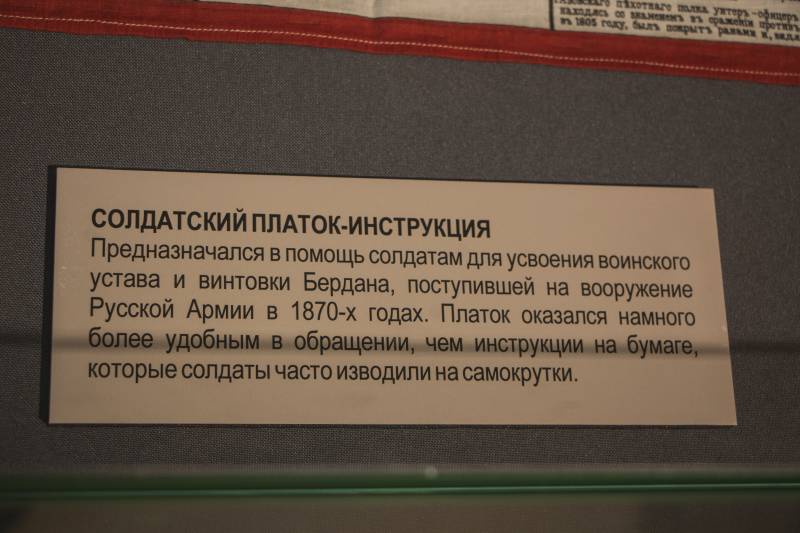