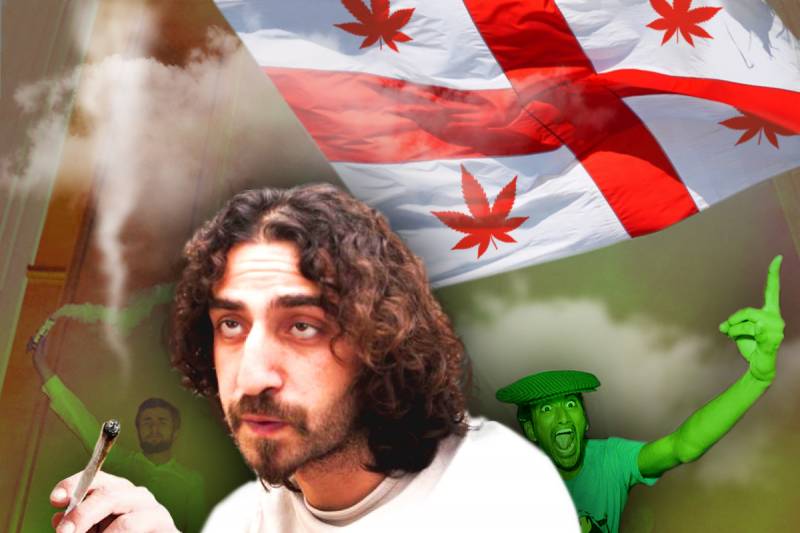 Last Saturday, the central streets of Tbilisi, namely Rustaveli Avenue, flooded crowds of youths with a hipster view of minor majors. At first, everything that happened was like an unscheduled attempt to hold a rave party, but then the demands of a completely different nature were heard. Young citizens in search of buzz and fun began to demand to demolish suffocating freedom and human rights power. People with bright faces, whose construction experience was limited to sand caster molding, openly declared that from now on they would build the future of European Georgia themselves. 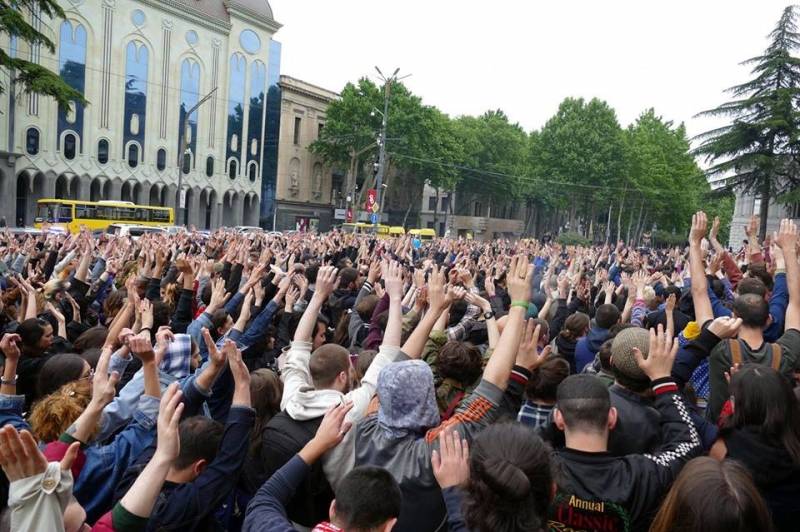 Where does this sudden political arousal come from? The reasons for this are hard to believe at first. On the eve, several young people died in hospitals in Tbilisi. The culprit of their premature death were drugs. Local media began to roll law enforcement in concrete. Therefore, the latter decided to act decisively and quickly in order to reassure the press and the public. Since the guys who died tragically were not some kind of homeless people and homeless without a penny, the police reasonably decided that in search of high and pink elephants walking on the ceiling, the young people went on a spree at nightclubs. Naturally, after the raid committed on these very clubs, namely “Basiani” and “Gallery”, the first detainees appeared. According to various sources, among the detainees was the guard and the owner of one of the establishments, which, of course, knew nothing.

And then it started. Masses of young people occupied the city center, arrogantly wriggling towards officials, considering it the height of manhood. Someone nervously twitched in a very peculiar dance, while someone hysterically began to bounce on the spot. Instantly from this crowd, like devils out of the box, various political movements and parties have come. The so-called “White Noise Movement” (“Tetri Khmauri”) became the locomotive of the suddenly aroused youth, regularly supporting all modern “European values”: from LGBT marches with bare ass to legalization of foolishness for the mass consumer. 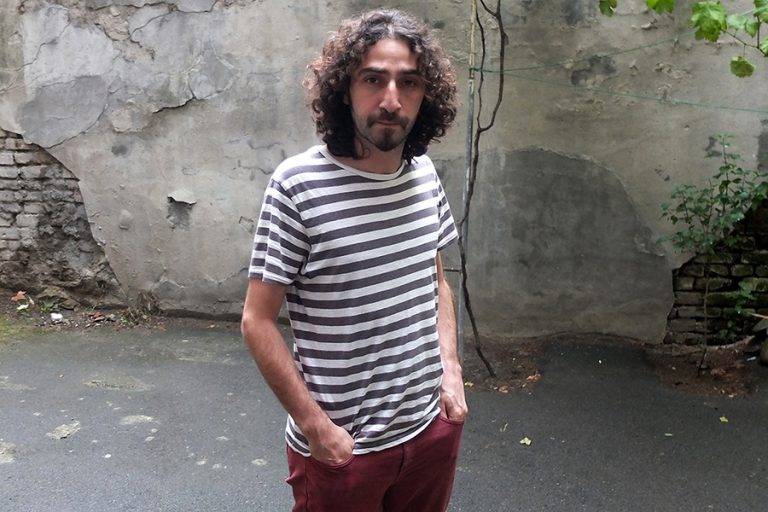 A giant of thought, the father of Georgian democracy and a person close to Europe: Beka Tsikarishvili

Soon the party owner, Beke Tsikarishvili, the leader of the “White Noise”, came to the scene. Citizen Tsikarishvili, along with his followers, regularly dangle on refresher courses in Europe. Upon his return, he begins to enlighten his "dark" compatriots with the finer points of European democracy. In 2013, law enforcement agencies took Beck into circulation, finding 70 grams of marijuana in his house, which threatened the Georgian "European" with a period from 7 to 14 years. Tsikarishvili, with the support of his followers, did not hesitate to declare that it was his inalienable right to keep crap. Beka with these advanced ideas even appealed to the Constitutional Court. In 2015, the court upheld his claim, and Beka was released "with a jamb in his pocket."

Assessing the potential of furious youths, the liberal party of unlucky Saakashvili joined the “revolutionary masses” United National Movement, which won very weighty 2016% of votes in the elections of the year 27. And Mishiko himself did not have to wait long. He quickly jumped out of his bushes in Washington, shook himself off, and dashed off a whole laudatory cart on Facebook. 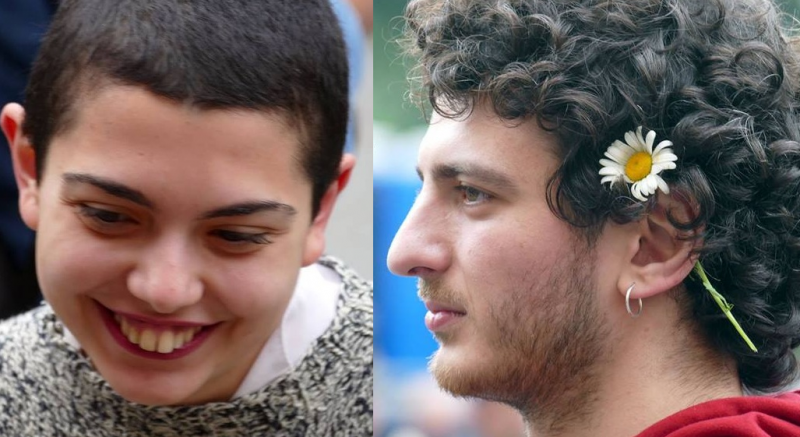 People with bright faces. The participants of the "Narkomidana"

Operatively to the location of the protesters were drawn up by media representatives. The picture came out extremely bright. Naturally, some of the citizens who were completely accidentally met by journalists were at least perfectly aware of all aspects of the detention of club dwellers, and at most, were their close friends. And, of course, all the detainees were absolutely innocent, they were not drug addicts, and any drugs they found were planted by the regime and personally by the Minister of the Interior. Rustavi 2, a broadcasting company, showed a special temper. According to well-known information, the controlling stake of shares was owned by an offshore desk called Degson Limited, which is closely connected with the long-playing citizen Saakashvili. In addition, even in Georgia itself, “Rustavi-2” was repeatedly criticized for inciting ethnic hatred against the Russians.

In general, the opposition rally biomass finally formed and took shape, and the requirements became quite specific. The fighters with all the bad for all good things even managed to put up tents. For the immediate establishment of a brighter future, in the opinion of the protesters, nothing was needed - the resignation of Prime Minister Georgy Kvirikashvili, Interior Minister Georgy Gakharia, and the entire government at the same time. Also, the citizens demanded to install dry closets on the avenue, as it is far from the wind. At the same time, the government, which for some reason unknown to the youths, does not wish to let their youth be lawfully disposed of was immediately declared “pro-Russian”. 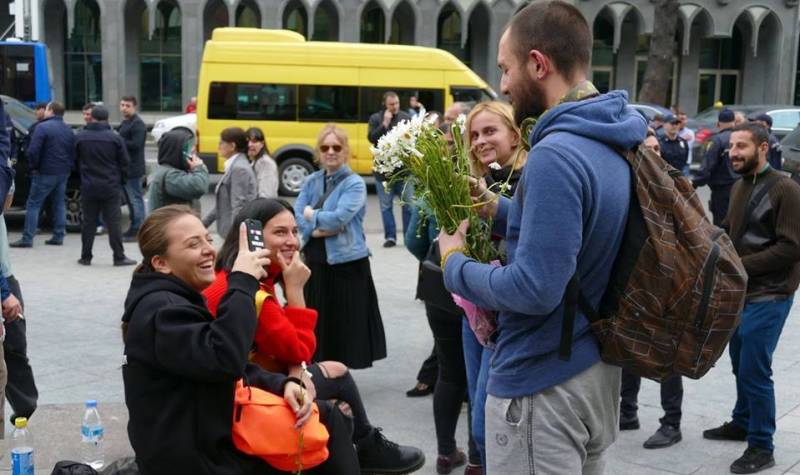 It is possible to imagine that the modern Georgian authorities are “pro-Russian” only in feverish delirium. After all, even diplomatic relations between our countries are not in sight - any communication takes place on an informal level. At the same time, it is the Georgian side that is more interested in establishing relations, since a widespread expansion of Georgian wines and citrus fruits in the European markets is not expected, so they have to push drinks and fruits mainly in the Russian market. In my humble opinion, our power will easily do without these “important” goods. 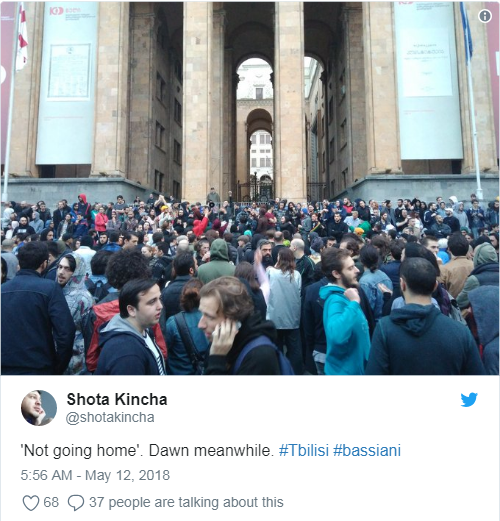 But the “motion” continued to grow, because Any kind of seething of this kind is in no way connected with logical thinking - populists and political adventurers rule the ball here. Therefore, specialized information provocateurs, who advocate any protest, began to protest against the protesters, if their western ears were growing behind their backs. In our case, Oleg Panfilov, a licensed Russophobe, eating up in the “handshake” media, became such a chick of the “nest of Zabugorsky”. This “objective” character set such deep roots in Georgia that even some citizens of this country accused Olezhka of provocation and inciting ethnic hatred. For example, Panfilov advocated restricting the Russian language in Georgia. In addition, many journalists believe that he remains the court bore writer Mishiko. In short, a professional mancourt. 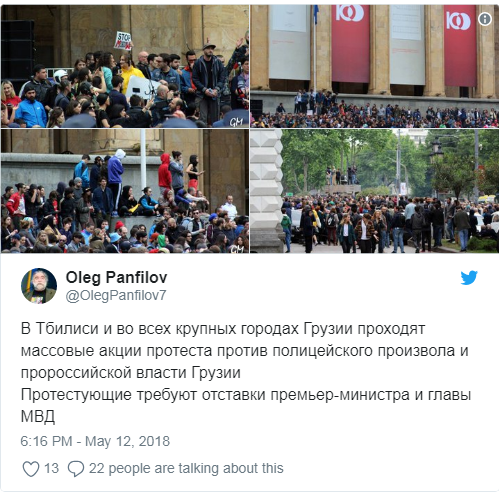 Well, if such citizens are tightened, then it is worth waiting for the continuation. Almost sent to the scrap, they received the hope to “shine” again with bright information stars in the European sky. However, such events were expected. After all, after the collapse of the USSR, various kinds of teachers of state and social order of a new life rushed to the territory of the former republics. The following NGOs were active in Georgia: The Strengthening Electoral Processes in Georgia, The International Foundation for Electoral Systems (IFES) and The US Agency for International Development (USAID, US Agency for International Development) ). Of course, these desks received the most powerful impetus to action during the reign of unforgettable Mishiko.

These organizations regularly held various seminars and conferences, through which they worked to form a loyal US political class, and on the other hand, a cluster of young people with a sharply negative attitude towards Russia. The latter was achieved by defamation of the Soviet past, up to the cave anti-Soviet. Those. The base for the formation of sectarian-minded adherents of the West was created long and thoroughly. At the same time, as in any sect, their religious faith in the West is not based on economically objective indicators, and, therefore, leaves no path to compromise or dialogue. Therefore, the attempt made by the authorities on Sunday to engage in a dialogue with the protesters a priori could not bring results.

Ctrl Enter
Noticed oshЫbku Highlight text and press. Ctrl + Enter
We are
What you didn't want to know about EnglandNikolay Silaev, Andrei Sushentsov: Georgia after the elections and prospects for Russian-Georgian relations
Military Reviewin Yandex News
Military Reviewin Google News
52 comments
Information
Dear reader, to leave comments on the publication, you must sign in.