Sobibor. The reaction to the film in a single cinema

17 May 2018
116
Recently, there was no special reason to rejoice in the quality of domestic cinema in the lighting segment. stories Great Patriotic War. Perhaps one of these relatively recent reasons was "28 Panfilov." But this is a separate topic, as the film initially began to be created in the framework of a truly popular initiative, and for a long time - and financial, too. By the way, thank you, our dear readers, for having responded to the appeal and financially supported the project to the extent possible, which the Ministry of Culture of the Russian Federation decided to finance later.


So, there was, frankly, not a lot of special reasons for applauding Russian cinema about the Great Patriotic War, but it seems that such an occasion appears in these days. And this reason is the film "Sobibor" by Konstantin Khabensky. Immediately make a remark: a) a purely personal opinion - in no way claiming to be the ultimate truth; b) Konstantin Khabensky does not know the author of the material, and the article on the “Military Review” (and sometimes this kind of “conspiracy claims” by individual users suddenly appear on our pages) did not pay, c) you can agree or disagree with the opinion, - the will of each of the readers, and finally, d) is, God forbid, not an advertisement for the film.

Not so long ago, a discussion between Khabensky and one of the journalists after the premiere of Sobibor in St. Petersburg was discussed at VO. Then the journalist asked, in fact, not an idle question. The question of what kind of reaction can a director have to do if people come to the film (average visitors of modern cinemas) with popcorn and coke. Then Khabensky boiled over, stating whether the woman did not regard many of the visitors of the cinema as "fools". The question was something else: really, is it possible to enter this film with the same popcorn and crunch during the scene, for example, with the poisoning of women in the gas chamber ...

During the presence of your humble servant at the Sobibor show, people actually came to the cinema, in whose hands were buckets with popcorn. And one of these buckets was in the hands of a boy of years 12, who came to the cinema, probably with his mother. So it turned out that we are located on the same row. And the first thought that flashed through my head when the lights went out in the hall - will this movie really be watched, without ceasing to chew sweet corn? ..

A few minutes in the hall was really heard chewing and the sounds of soda passing through a tube ... But ... Then, no such sounds could be heard. Maybe they just finished it all? - it was thought at that moment. More on this later.

After some time, I felt some uncharacteristic tremor in the row on which I was sitting. At first I could not understand what was happening, then the reason was revealed - several people began to sob, and obviously trying to contain themselves, but it did not work out. Emotions from viewing restrain themselves are not allowed. Judging by the age - female students who decided to spend a Sunday evening in the cinema. Have you been consciously at the Sobibor? - As it turned out later: no. It turned out that what is really - students. “We saw a Russian film on a poster, they decided to watch it, but they didn’t think it would be like that ...”

“I don’t remember when I last cried at the cinema. In my opinion, when my parents took me there for the first time, it's up to school. But she started crying because the lights were turned off. Now - the film to tears ... ", - said one of the spectators.

What, in fact, the film - if from personal perception. Yes, declaratively - a film about the exploits of the officer of the Red Army to free the prisoners of the death camp "Sobibor". Yes, the film is about those Nazi atrocities that some gentlemen and ladies have somehow forgotten about. But this film has several very important, if I may say so, accompanying stories. One of them: the question of what kind of strength of mind, charisma, self-confidence must be possessed in order to lead hundreds of people who have long fallen into despair and perceive their existence under the sole of the executioners as a given, against which "one cannot go." The question of how to explain to people that they can take revenge on the executioners with their own hands, being aware of their greed, how to become a community, ceasing to perceive themselves as someone who is left alone and cannot do anything.

Lieutenant Pechersky at Sobibor did it. And today it is important that it turned out to convey this nerve from the director "Sobibor".

Another accompanying story - the role of a man who took the oath and is ready to follow it even where it would seem impossible by definition. Speech on the core of a person who (core) may be religious or other ideological. This can be regarded as a reference to the fact that a society without ideology is going nowhere, turning into a set of blinkered individualists or, rather, pseudo-individualists, who are looking for justification every time. 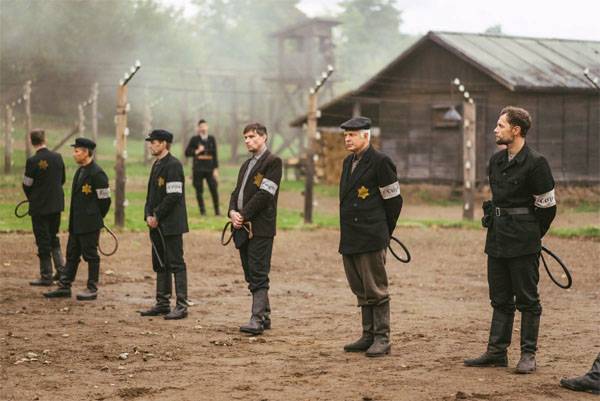 One of the scenes in Sobibor attracted special attention: people running through the broken camp gate past the wounded camp commander Karl Frenzel (played by Christopher Lambert), still take off their caps. He is wounded, they are a step away from freedom, but still they take off and bow. Shrill ...

This once again underlines the enormous task that the Soviet officer who was in the Nazi concentration camp was solving. The task is to explain to the prisoners the very need to abandon the slave's ideology driven in and obtain for themselves the long-awaited freedom. In the film, this is one of the brightest episodes.

Returning to the above-mentioned young viewer from the cinema.

Turn on the light. He got out of his chair with his mother, holding in his hand the very thing - almost full - a bucket of popcorn ... He didn’t touch. Sniff, leaving the hall. And the reaction of other viewers also attracted attention - they walked in silence, slowly, the majority - looked somewhere on the floor.

Without pathos: the film made an impression and, judging by the reaction of the audience, not only on your humble servant. It is important - without falsehood, without procrastination, without replay. All of the case. Memory is just refreshing ... And as a history lesson for the younger generation - in the top ten. Although, once again, the opinion is purely personal and certainly not imposed on anyone. It may seem to someone that popcorn and cola are still more worthy of attention ...

Ctrl Enter
Noticed oshЫbku Highlight text and press. Ctrl + Enter
We are
A great interview with Sergey Lavrov: about Ukraine, Obama and IranWhat you didn't want to know about England
Military Reviewin Yandex News
Military Reviewin Google News
116 comments
Information
Dear reader, to leave comments on the publication, you must sign in.