New Cold War Signal: Reincarnation of the US Navy 2 Fleet

15 May 2018
10
“Our current national defense strategy made it clear that we were back in the era of confrontation between the great military powers. This is due to the fact that the country's security is facing unexpected challenges and complications, ”said Admiral John Richardson the other day. He is not a simple admiral, but a four-star one, that is, a naval chief having the highest rank, a member of the Joint Chiefs of Staff (the highest planning and command body of the US armed forces). The position he holds is called: Chief of Naval Operations. 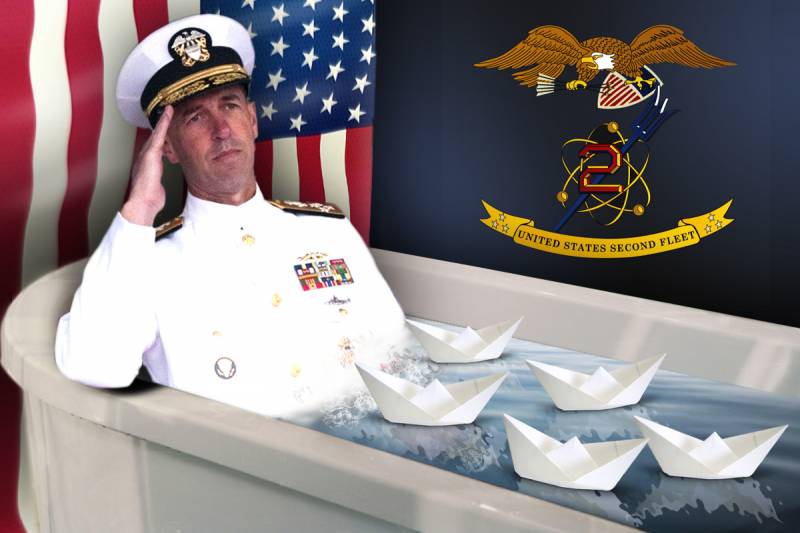 Mr. Richardson made his fateful statement at the ceremony of changing the command of the Atlantic Naval Port in Norfolk, Virginia. He also said that the decision was made to restore the 2 fleet in order to counter the new threats in the North Atlantic.

Earlier, in 2011, the 2nd team fleet was dissolved in order to save money, and the assets of the 2nd fleet and its personnel were scattered inside the navy. Prior to its disbandment, the 2nd Fleet played a key role during the Cold War, conducting operations in the North Atlantic and supporting the US Navy in the Mediterranean.

A statement by the US Navy Command states that the 2 fleet will provide for the presence of US naval forces along the eastern coast of the United States, as well as in the North Atlantic region. According to Western military strategists and analysts, this is necessary due to the increased military presence in the region from Russia, whose planes and ships in recent months "have made numerous invasions of the North Atlantic close to the airspace and territorial waters of the US allies, including Britain." NATO naval officials at the end of 2017 also reported that Russian submarines were probing deep-sea data cables in the North Atlantic.

A document signed by US Secretary of the Navy Richard W. Spencer fell into the hands of American journalists, stating that they made a decision to restore command of the 2 fleet in Norfolk based on the recommendations of the US Navy Commander approved by the Chief of Naval Operations By john richardson In short, the process went.

So far, there has been a stage of bureaucratic approvals and formally determined actions and decisions. Thus, the aforementioned document, signed by the US Navy Minister, states that "the second fleet commander will prepare and operational control ships and aircraft assigned to the fleet during naval and joint operations together with parts of other arms." It sounds very menacing, though streamlined. The command of the 2 fleet, and the fleet itself still exist only on paper. It is planned that by July 1 the fleet staff will be staffed only by 11 officers and four privates. Over time, it is planned to increase the staff to 85 officers, 164 military personnel and 7 civilians.

The final configuration and tasks of the fleet will be agreed upon after they are approved by the new commander of the US Navy, four-star admiral Christopher Grady. This will happen this summer.

The commander of the US Navy in Europe, Admiral James Foggo, back in 2016, announced that "Russia and the United States are involved in the fourth battle for the Atlantic." In an article he wrote for the magazine of the US Naval Institute, he compared the situation with the underwater battles waged by the allied naval forces against Germany. “Once again, we are challenged by an effective, qualified and technologically advanced Russian submarine force. Russian submarines roam the Atlantic, test our defenses, resist our command of the seas and prepare a difficult underwater battle to gain an advantage in any future conflict, ”Foggo wrote. He added: "The actions and capabilities of Russia are not only reinforced by disturbing and confrontational methods, but also their national security policy is aimed at challenging the United States, its allies and NATO partners."

Even earlier, at the end of 2014 of the year, one of the designers of US submarines admitted that he was so impressed with the Russian project 885 (“Ash” submarines) that he got himself a model of the Severodvinsk submarine and put it in a prominent place in his reception room, to see her every day. And Vice-Admiral Dave Johnson, who is directly responsible for the technical development of the submarine fleet, said at a conference: “We will face tough potential rivals. Just look at Severodvinsk. ”

Such sentiments prevail today in the American military establishment on various power and political floors. For example, in January 2018, Secretary of Defense Jim Mattis announced that the United States was faced with "growing threats from China and Russia," which "have undermined the advantages of the US military in recent years." “We are faced with growing threats from revisionist powers, such as China and Russia, countries that are seeking to create a world corresponding to their authoritarian models,” said Mattis, introducing the Pentagon’s national defense strategy. “Our military is still strong, but our competitive advantage has collapsed in all areas of warfare,” he added.

Extraordinary, you see, a combination of imperial arrogance and no longer hidden fears of the military might of a potential enemy. The geopolitical claims of the United States for a leading role in all world processes are well known. And anyone who disagrees with her is called a “revisionist” and an enemy of democracy. This is a common place. But the 2 fleet is something new: the Americans want to reincarnate one of the cold war's bugbugs. What is the 2 fleet? It was he who played the leading role in the Caribbean crisis, which put the world on the brink of nuclear catastrophe. On account of the 2 fleet - the blockade of the island and the invasion of Grenada, tracking the activity of the Soviet fleet in the North Atlantic. Before the dismantling of the state of the fleet consisted of more than 100 military ships and submarines.

It is clear that they want to be present in the Arctic, to defend their Atlantic coast ... But the main thing, in our opinion, is not practical use, but the ideology of a decision on the 2 fleet. After all, it turns out that the Americans conceived to launch a broken record in the second round. Perhaps ... However, they themselves do not seem to believe in the success of this hopeless project. After all, nothing like our "Ash" they have not yet appeared.

Ctrl Enter
Noticed oshЫbku Highlight text and press. Ctrl + Enter
We are
The tragedy of the American army ("The Atlantic", USA)Situational analysis of the death of the MH17 flight (Malaysian Boeing 777), made on the basis of engineering analysis from 15.08.2014
Military Reviewin Yandex News
Military Reviewin Google News
10 comments
Information
Dear reader, to leave comments on the publication, you must sign in.