"White" in Finland won the "red"

15 May 2018
20
15 May 1918, exactly 100 years ago, ended the Finnish Civil War. The “Red” Finns, who acted with the support of Soviet Russia, suffered a final defeat, and Russia's political influence on Finland is a thing of the past. Unlike the Civil War in Russia, in Finland the Civil War was short-lived. It lasted from January 27 to 15 May 1918, and the victory of the “white” Finns marked the end of the “Russian” stage in stories Finland, which lasted more than a century.


As is known, in the 1809 year, following the results of the Russian-Swedish war 1808-1809, which ended with the defeat and surrender of Sweden, Finland became part of the Russian Empire as the Grand Duchy of Finland, having largely retained its own laws and system of local government. In the second half of the XIX century in Finland began to awaken national identity.

Despite this, by the end of XIX - early XX centuries. The Russian authorities began a policy of Russification of Finland, which could not but meet irritation in Finnish society. Thus, in 1904, Governor-General Nikolai Ivanovich Bobrikov, who was considered one of the main supporters of the Russification of the Grand Duchy of Finland, was killed. When the 1905 revolution began in Russia, practically the whole of Finland joined the general strike, which made the emperor make certain concessions. Thus, Finland became the second country in the world after New Zealand, where in 1906, the right to vote was introduced for women. However, when revolutionary demonstrations across the country were suppressed in 1907, Emperor Nicholas II reintroduced military rule in Finland, which existed until 1917.

After the February Revolution 1917, Finland began a movement towards the restoration of autonomy. 18 July 1917 adopted a law to restore autonomy, but the Provisional Government did not recognize it. The Finnish Seym building was occupied by Russian troops, and the real power of power remained in the hands of the Russian governor-general. Perhaps Finland would continue to remain under Russian control if not for the October Revolution. 28 November The 1917 Parliament of Finland took over the supreme power in the territory of the former Grand Duchy. A government was formed - the Senate of Finland, which was headed by a lawyer Per Evind Svinhovud - a well-known Finnish politician, an opponent of Russification, who had been in his time in Siberian exile.

6 December 1917, the Finnish Parliament 100 with a vote against 88, voted in favor of the Finnish Declaration of Independence. 18 (31) December 1917 was the first to recognize the independence of Finland by Soviet Russia. In early January, 1918, Finland’s independence was recognized by eight countries - Russia, France, Sweden, Greece, Germany, Norway, Denmark and Switzerland. However, despite the proclamation of independence, the situation in the country remained extremely tense. Ever since 1917, heterogeneous militias have operated in Finland, controlled both by supporters of the bourgeois-democratic republic and by pro-Soviet forces. 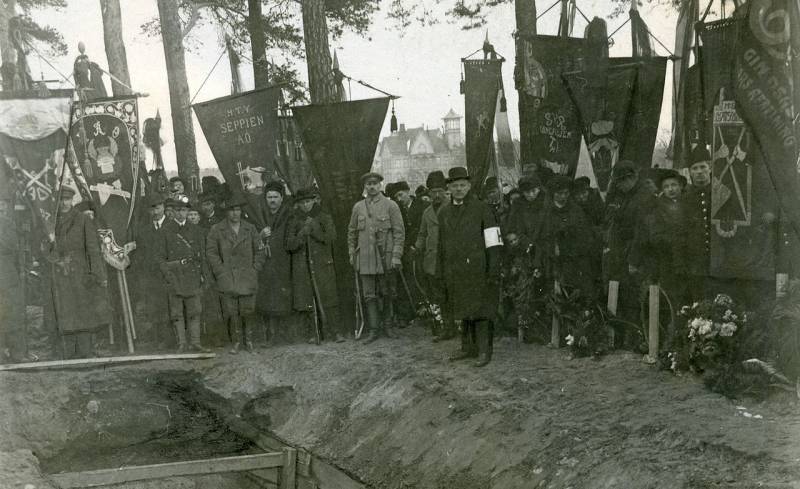 Fearing the intensification of the Red Guard and the prospects for the seizure of power in the country by the "red", on January 12, 1918, the Finnish parliament instructed the Senate to take immediate steps to restore order in Finland. The Senate, in turn, entrusted Baron Karl Gustav Mannerheim to head the “putting in order”. A graduate of the Nikolaev Cavalry School, a Swede by birth, Karl Gustav Mannerheim served for thirty years in the Russian Imperial Army, having gone from Cornet to Lieutenant General. During World War I, General Mannerheim commanded the 12 Cavalry Division, but in 1916 he was sent to the reserve and in January 1917, resigning, returned to his homeland in Finland. 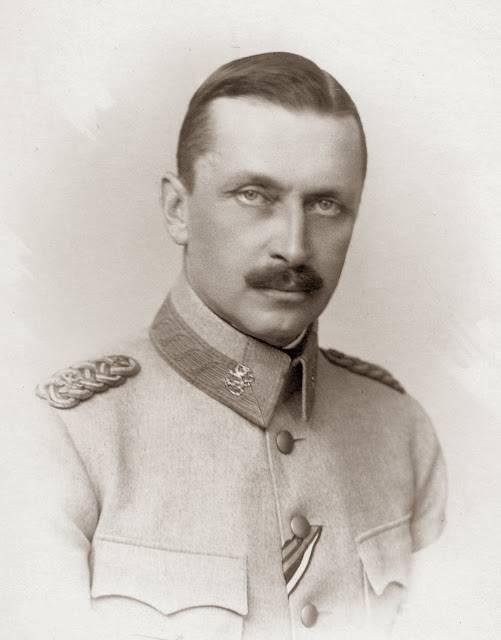 16 January 1918, General Mannerheim was appointed commander-in-chief of the Finnish army, which had not yet been established. The militarized formations of supporters of the bourgeois-democratic system were united in the Finnish Civil Guard (Suojeluskunta - “Civil Guard”), which is also referred to in the historical literature as “Security Corps” - “Schückcore”. In contrast to the proletarian Red Guards, the formations of the shützkor were mainly staffed by peasant youth and young intellectuals, and former soldiers of the Russian army, Finns by nationality, also joined them. 25 January 1918, all the formations of the blitz were proclaimed by the lawful armed forces of Finland. Since the shyutskor was originally staffed exclusively by volunteers, it was not numerous. 18 February 1918 to solve this problem, Carl Gustav Mannerheim introduced universal military service in Finland, which allowed the number of shützkor formations to increase quickly.

On the night of January 28. 1918, subordinates to Mannerheim, detached units disarmed Russian troops in several cities in Finland. 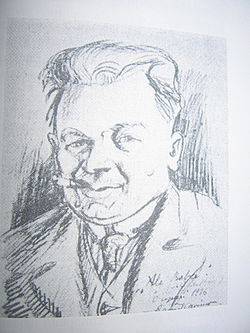 At the same time in Helsinki, a military coup under the leadership of the Social Democrats, who relied on the Red Guard, took place. So began the Finnish civil war. The first commander of the Red Guard was Ali Aaptonen - a journalist from socialist publications, who had taken part in the Russian-Japanese war in the past, but because of his participation in the 1905 revolution, he was demoted to the rank and file.

Russian troops stationed in Finland received orders from the Soviet government to maintain neutrality, but instead most of the Russian officers acted in alliance with the manager of Mannerheim. Many Russian officers helped Mannerheim in disarming the Russian troops, thanks to which he received much needed information. weapon. For example, Vice Admiral Nikolai Podgursky, who commanded the Baltic submarine division until November 1916 fleet, helped General Karl Mannerheim disarm Russian troops in northern Finland. Here is a paradox - officers of the Russian Empire actually helped Mannerheim to forge Finland’s independence. Meanwhile, the Red Guard acted with the support of Soviet Russia, and if then, in 1918, the Reds won in Finland, then most likely the country would remain under the control of Moscow. However, Russia could not provide direct military assistance to the “red” Finland at that time. Under pressure from Germany, on April 1, 1918, Lenin banned the sending of Russian troops to Finland.

Among the military units of the Russian units, who were in the winter - spring 1918 of the year in Finland and numbered about 100 thousand people, fought on the side of the Red Guard from 1 to 3 thousand people. Thus, the side of the Red Guard was taken by Lieutenant Colonel of the Russian Army Mikhail Stepanovich Svechnikov, who in December 1917 was elected by soldiers as commander of the 106 Infantry Division (prior to the February Revolution, Lieutenant Colonel Svechnikov served as Chief of Staff of the 106 Infantry Division, and in the spring of 1917 he was located in Tampere.

In many ways, a turning point in the civil war was associated with the return of the Finnish rangers from Germany. Unlike most volunteers and conscripts, the Finnish rangers had good military training and real combat experience. These were Finnish separatists who fought in 1915-1918. in the rangers of the Prussian army on the side of Germany. 25 February 1918 near 950 Finnish rangers who fought with the German forces in the Baltic States returned to Finland, after which the Schützkor received real military professionals who were able to organize the training of personnel and build a coherent command system at all levels. In addition to the Finnish rangers, the Swedish volunteers also fought on the side of the Schützkor. 6 April 1918 as a result of a fierce battle with the "red", a squatter in the face of a brigade of Swedish volunteers and battalions of Finnish rangers stormed the city of Tampere. It was the first such large-scale victory over the “Reds”, with which a radical change in the war began. 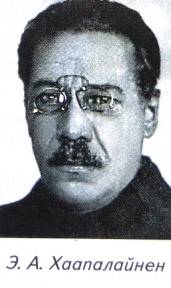 In his post as commander of the Red Guard, Ali Aaptonen was replaced by another “red” journalist - Eero Haapalainen, a professional revolutionary and member of the social democratic movement from 1901 of the year. In the Council of the People's Commissioners of Finland, he also served as the people's commissar of internal affairs.

Meanwhile, the landing of its troops on the territory of Finland began Germany. 3 On April 1918, a German corps with 9,5 troops and thousands of troops landed in Hanko, and a German detachment with 7 troops (thousands of soldiers) landed in Loviisa on April X in Loviisa. 2,5 April 6, the Council of People's Commissioners, after the last meeting in Helsinki, decided to evacuate to Vyborg. The defense of the Finnish capital was completely in the hands of the local Red Guards. 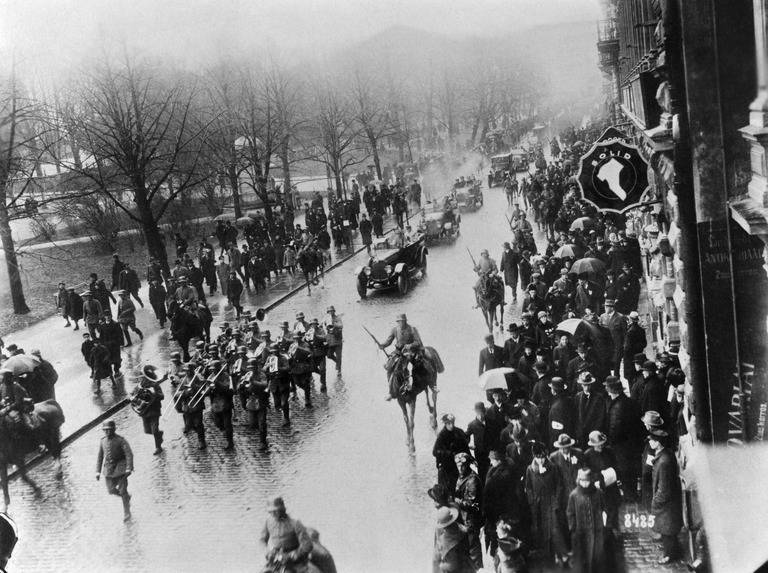 Of course, the flight of the “red” government contributed to the demoralization of the Red Guard and testified that even the Finnish Social Democrats had lost faith in the victory over the “whites”. The situation was complicated by the fact that the ships of the Soviet fleet left Helsinki, without offering resistance to the Germans, and the Russian artillery of the Sveaborg fortress was without locks. As a result, the German troops, whose number in Finland reached 14-15 thousand people, 11-12 on April occupied Helsinki without any problems, having suppressed the resistance of scattered Red Guard units.

Thus, the participation of German troops accelerated the defeat of the Red Guard. 26 April 1918 Finnish troops under the command of Mannerheim occupied Vyborg, and the “red” government of the Council of People's Commissioners with full complement fled to Petrograd. 15 May 1918 The Finnish civil war effectively ended in victory for the “white” Finns, and the 16 May 1918 held in Helsinki a solemn parade. On the main streets of the Finnish capital, columns of all the forces of the Schützkor, who took part in the hostilities against the “Reds” - infantry regiments, artillery, Finnish huntsmen, Swedish volunteers passed. A squadron of the Nyland Dragoon Regiment, led by General Karl Gustav Mannerheim, proceeded in the horse formation. 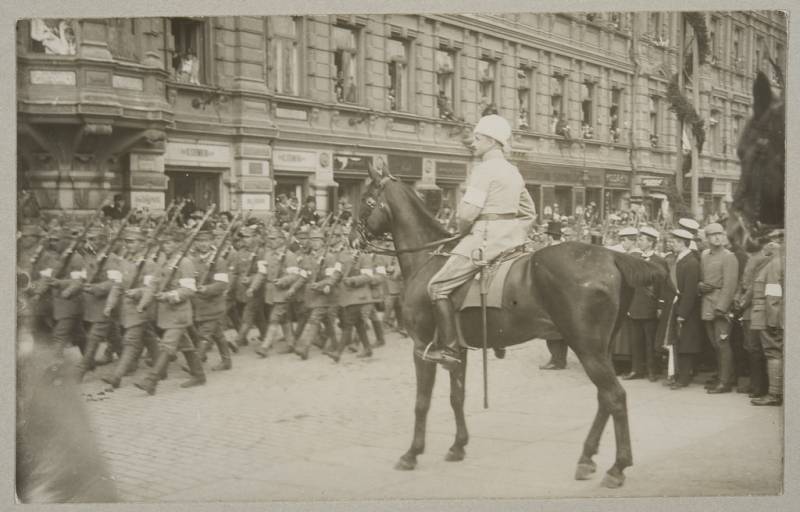 However, the defeat of the “Reds” in the civil war, in which the German forces played a key role, brought Finland into the orbit of the military-political influence of Germany. Actually, Germany initially also set its goal to spread influence on the fragments of the Russian empire - the Baltic states, Finland and Ukraine. The transformation of Finland into the satellite of Germany was very negatively perceived by the hero of the Civil War, General Mannerheim. Initially, he generally opposed the landing of German troops in Finland, and when the landing did happen, he believed that the German units should be subordinate to him. But it turned out the opposite - the Finnish government ordered Mannerheim to create a Finnish army with commanding officers from German officers and under German control.

Naturally, this situation did not suit the general and he, having resigned from the powers of the commander-in-chief of the Finnish army, left for Sweden. It was only when Germany capitulated in November of 1918, that the Finnish government of Svinhovuda, which discredited itself by unequivocal cooperation with Berlin, was forced to resign. General Mannerheim returned to Finland, where he was declared interim head of state (regent of the Kingdom of Finland).

The civil war in Finland actually consolidated the political independence of the Finnish state, which arose as a result of the collapse of the Russian Empire. Thanks to the help of Germany and Sweden, supporters of the bourgeois-democratic system won in Finland, which for the next century determined the features of the country's political development.