14 May 2018
74
Materials appear in the Ukrainian media about the consequences for the country led by attempts by the authorities, outside of common sense, to change the fuel in Soviet-designed reactors with the American Westinghouse fuel. Recall that at once at several NPPs of Ukraine, attempts were made to replace nuclear fuel with American counterparts, which were not originally intended for operation at the mentioned reactors. What this led to, said Yevgeny Chervonenko, the former Minister of Transport and Communications of Ukraine, the former head of one of the civil service departments for emergency situations, in an interview with 112 Ukraine.

In the summer of 2017, Westinghouse, which is trying to push the Russian Federation out of the Ukrainian atomic energy market through politics, conducted experiments in Zaporozhye with reactors similar to those in which Ukraine "burned" at one time in Chernobyl, having received a continental catastrophe. Now the Americans are reworking the fuel elements of the Zaporozhye NPP and import them through Sweden to the territory of Ukraine. It threatens the country with a new catastrophe, signs of which are already being observed ...

According to Chervonenko, at the South-Ukrainian NPP in 2017, it was only thanks to the efforts of the Russian nuclear scientists that the danger posed by the “experiment” with Westinghouse fuel at one of the reactors was eliminated. Then the temperature in the cooling system rose to a critical level. 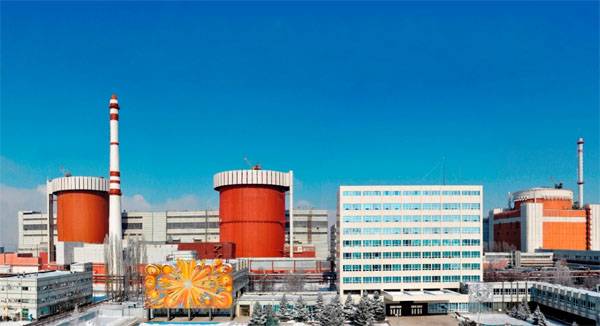 From the statement of Yevgeny Chervonenko:
There was a terrible accident - barely extinguished. When the cooling lake began to boil in Nikolaev, who saved us? People do not tell it. Well, how to break a relationship? Shout as much as you like - well, we cannot without Russia. Do you understand? It's impossible.

The emergency disconnection of the rector of one power unit at YuUAES occurred in the autumn of 2017. Initially, in the Ukrainian Energoatom, it was reported that nothing serious had happened - "they coped on their own." Now it becomes known that this is not so. The cause of the emergency shutdown was the triggering of several circuits of the protection systems after loading into the reactor the fuel assemblies produced by an American company. The operation of these fuel cells has led to a temperature imbalance and an increase in the load on the power system of the nuclear power plant. All this, as experts note, could ultimately lead to disaster.

According to Chervonenko, he does not understand those who in Ukraine are in favor of breaking all trade, economic and scientific relations with the Russian Federation.

Today it became known that at the Zaporizhzhya NPP, the 5 unit was disconnected for "scheduled maintenance".