14 May 2018
38
The pilots of the American F-22A behaved correctly while accompanying the Russian strategic bombers Tu-95MS over neutral waters, reports Make a star. 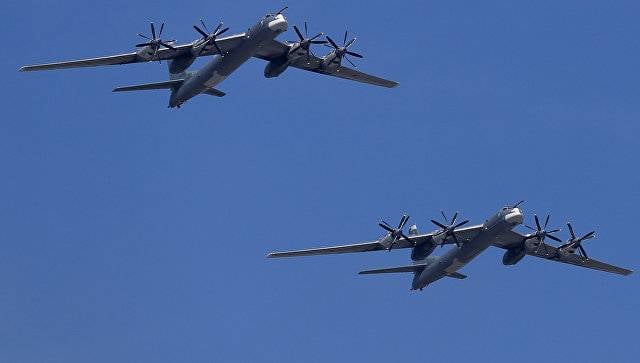 Earlier, the Russian Defense Ministry said that the missile carriers Tu-95MS and anti-submarine aircraft Tu-142 successfully completed the planned flight over neutral waters and worked refueling in the air. One of the groups in a separate area was accompanied by American fighter F-22A.

The F-22A pilots held correctly, did not demonstrate any aggressive intentions, only indicated their presence at a respectful, approximately 100 meters, distance,
told the newspaper the commander of the group Tu-95 Lt. Col. Alexander Manyagin.

According to him, the Americans clearly took into account that the Russian pilots performed the flight in strict accordance with the International Rules, without violating the borders of other states.

“If in previous times in such cases our planes were accompanied by four or five successive groups of fighters of the Air Forces of Japan, the USA, and South Korea, this time only the Americans identified themselves and only one pair of fighters,” the article says.

The flight passes 11 May over the neutral waters of the Arctic Ocean, Bering and Okhotsk seas. During the flight, bombers and anti-submarine aircraft were accompanied by MiG-31 and Su-35 Fighter Jets. During the 17-hour flight, the crews worked on air refueling. All the tasks of the air patrol plan were completed in full.