Cleansing from fascism? Or lulling vigilance?

15 May 2018
23
Salutes in honor of Victory Day died down and flickered, but on other days a simple truth must be remembered: if there is fascism somewhere, it creates a danger. Especially if it is very close and directly affects us, the Russian people (who live far from only on Russian territory). And, of course, it is necessary again to look with alarm at what is happening in Ukrainian cities. 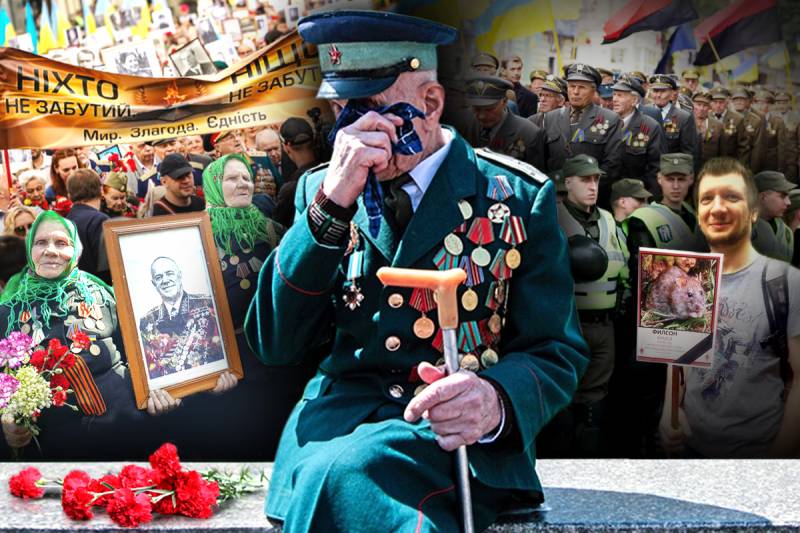 And there this time something out of the ordinary happened. That which was not long ago, since the time of the notorious “euromaidan”. And a huge number of people participated in the “Immortal Regiment” action - in Kiev, Odessa, Nikolaev ...

And the Inter TV channel suddenly showed a concert dedicated to Victory Day, at which it sounded what is dangerous to talk about in today's Ukraine. The fact that eight million Ukrainians died in World War II. The fact that it is unacceptable to call the streets of Ukrainian cities after the names of fascist criminals. About what you need 9 May bring flowers to the Eternal Flame and restore the monuments to the soldiers of Victory.

So, maybe, speech that the post-brown brown darkness gradually dissipates? Maybe Ukraine is gradually cleared of fascism and Bandera? Moreover, in Ukrainian society there is a very strong demand for values ​​associated with the Great Victory. Many, like those living in Russia, fought ancestors. Many grew up on the same songs that we did. Many still, despite the aggressive Ukrainization, continue to speak in Russian. It’s not so easy, even after four years of total ukroterror, to break it all.

On the other hand, the Victory Day in Ukraine was clouded, as usual. Here they are, manifestations of fascism, not gone away! Bandera’s cynical rallies at the peak of the Immortal Regiment ... Attacking the participants of the present Immortal Regiment ... Detention and severe beating of Ukrainian politician Elena Berezhnaya - sadists did not like the presence of St. George’s colors in her costume ... Vorobyov, who was doused with green paint and other filth for going to lay flowers in honor of 9 May ... Provocations of radical nationalists against the TV channel "Inte "Carried out in retaliation for the concert" Victory, one for all "... The arrest and deportation of journalists of TV channels" Russia "and" First Channel "Valentina Solovieva, Olga St George - in the fear that they will show the international community" wrong picture "...

These are all the manifestations of neo-Nazism that we have been tracking from the very beginning of the coup d'état in Ukraine. Moreover, as can be seen, both the radical thugs and the Ukrainian authorities are almost equally involved in all this. The radicals and women are attacked by the radicals, while the law-enforcement agencies of the Kiev junta arrest and deport disagreeable people.

Why is this May 9 celebrated in Ukraine on a larger scale than usual?

Firstly, because tens of thousands of people who are not afraid to declare their position, despite the total atmosphere of fear, do not put it anywhere. No one can forbid them to go out with portraits of their ancestors. The authorities simply can not be disregarded. You can, of course, shoot the "Immortal Regiment" with machine guns, but if there are many victims, then this would be horrified even in the West. Which, however, “swallowed” the Odessa Khatyn, but there are limits to everything. There are opposition politicians who are also not so easy to imprison everyone.

And, in the end, Mr. Poroshenko can not understand that he is not a king and not a king. What needs to be fought is not only for the voices of neo-Banderes, who have long been dissatisfied with the Minsk agreements, consider the absence of a real war between Russia and Ukraine to be the result of the authorities' indecision and most likely will support a much more radical nationalist.

There is, however, another explanation to which many residents of the Donetsk and Luhansk People's Republics are inclined. These people are exhausted by the shelling that has become more frequent lately from the Ukrainian side. They find it hard to believe that anything else can come from there except for shells.

In the DPR and LPR, one can hear the point of view that the seeming softening of the Ukrainian policy, its cleansing from the manifestations of extreme nationalism is just a desire to put down vigilance. Like, in this way they wish that in the case of the implementation of a tricky scenario of liquidation of the people's republics with the help of UN peacekeepers, the citizens of the DPR and the LPR would not resist too much.

Moreover, some particularly "smart" neo-Nazis openly talked about saying beautiful words about the world, and they will hang them later.

Well, this opinion also has the right to life. Most likely, we are dealing with both of these trends. Ukrainian society is really beginning to gradually wake up. And the authorities are trying to take advantage of this awakening for their own purposes, such as the liquidation of the republics.