14 May 2018
15
The Thompson submachine gun is not only a “bestseller” and the leader of the arms market in the past, but also one of the long-livers. No joke, the first batch of this weapons was released in 1919 year, and their official military career in the US Army ended in Vietnam. 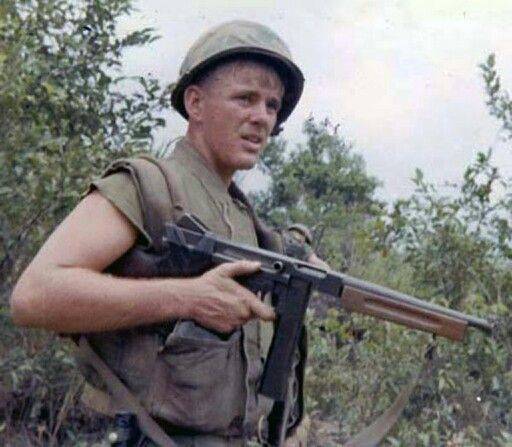 Acting in the jungle, the “green berets” tried to equip at least one of the fighters of the head patrol with “Tommi-Gan” with a disk shop. Since this, hopelessly by then, obsolete weapons, allowed to unleash a squall of fire on the enemy suddenly appearing at an ultrashort distance.

We also note that Thompson was the main machine gun of the western part of the anti-Hitler coalition. And at first, while the UK did not begin production of the "Stan", and the only one.

Used "Thompsons" and the Soviet fighters. The first "Tommy-Ghana" appeared in the USSR long before the beginning of the Great Patriotic War. In 1924, through Mexico, the Soviet Union purchased the party М1921, which came into service with the troops of the OGPU and the border troops. "Thompsons" were actively used on the southern borders of the USSR during the battles with the Basmachis. The service documentation was referred to as "Thompson's light machine gun." 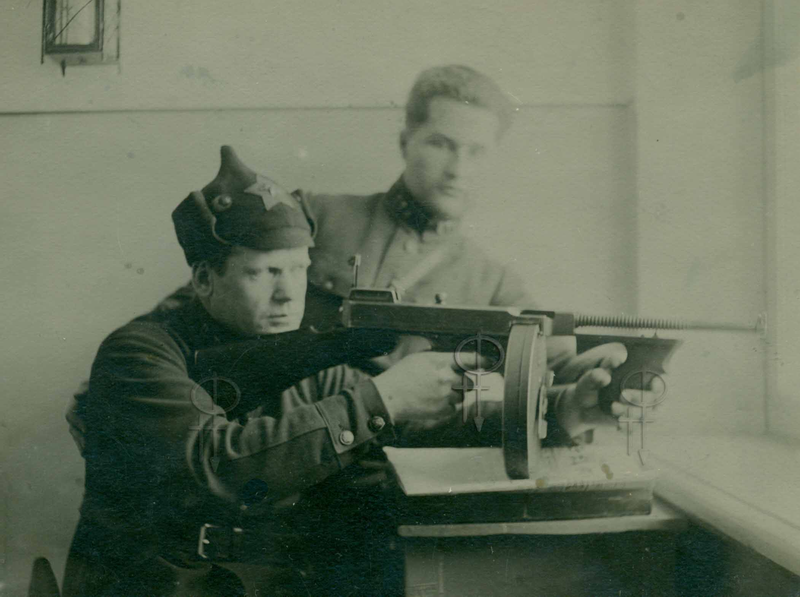 Then, already in 40-x, a significant number of submachine guns arrived in our country under the Lend-Lease, including in military equipment packs. On the Stalingrad front there were entire units armed with the Thompsons.

However, "Tommi-Ghana" did not enjoy special popularity in the Red Army, primarily because of the large mass. And at the first opportunity, the Red Army men changed them to the usual PCA.

Actually, the combat use of this weapon, sung by Ernst Hemingway and cinema, is not yet complete: in some low-intensity conflicts it is used by fighters of various irregular formations. But, since the militants, who do not have access to serious arsenals, use any weapon that fell into their hands, this circumstance does not always indicate its high combat characteristics.

It is quite another thing - the saleability of old weapons in the civilian market, when the buyer makes a choice in favor of a particular sample, despite the presence of more "young" and, it would seem, more technically advanced "competitors".

So, for example, the three-ruler, SCS, “fenced-off” (that is, deprived of the automatic fire functions) PPSh and PPS have been invariably successful for many years in the US market. And not only among collectors, collectors of weapons of the past era, but also among practitioners. This is evidenced by the abundance of tuning kits for these samples and workshops that carry out their modernization. Weapons updated with their help lose historical authenticity, but it acquires improved consumer characteristics. Which, undoubtedly, testifies to the demand for this design in our days.

So there is every reason to say that "Tommy-gan" remains popular today. 10 May began selling an updated model of the submachine gun - Tactical Tommy Gun. Like almost 100 years, it produces the company Auto-Ordnance. 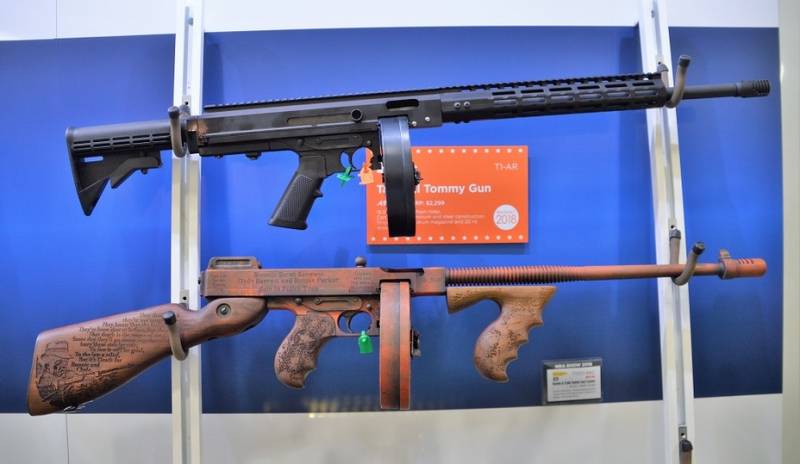 In the new version of "Thompson" used approaches traditional for modern American small arms. The submachine gun acquired a tubular perforated forearm with the possibility of mounting Picatinny slats from the side and bottom for mounting the LCC, tactical handle and flashlights. Another Picatinny rail is located on top of the tubular forearm and receiver, on which various aiming devices can be mounted - collimator, optical or mechanical (there is no standard sight, as on the old Thompson).

The weapon is completed with a box magazine for 20 cartridges, and a drum for 50. It is possible to use on it and the stores on 100 cartridges that have been preserved from the first half of the last century (their curb weight was about 4 kg).

In addition, the submachine gun received a four-position telescopic butt, like the M-4 carbine, and a fire pistol grip, traditional for the AR-15 family. For the civilian market, it is planned to produce a submachine gun in a semi-automatic version.

The caliber of Tactical Tommy Gun, as before, is 45ACP. However, Auto-Ordnance indicates that in the future we plan to release a version chambered for 9 × 19 mm Luger.

The presentation of the new "Tommi-gana" took place almost six months ago, at the SHOT Show 2018 exhibition, held in Las Vegas. It is noteworthy that at that time the estimated retail price for these weapons was announced - in 1000 US dollars. However, "at the exit" it amounted to 2229 dollars! But the high price of the Thompson is also a tradition. In 20 of the last century, it was 225 $, while the price of a car was about 400 $.

The incoming messages indicate the success of a new product - sales in the first days even slightly exceed the planned ones.

Of course, Tommy Gann is hard to compete with modern machine pistols, with its weight of almost five kilograms and linear dimensions comparable to assault rifles (852 mm).

However, its advantages - high accuracy, low recoil, a cartridge with a powerful stopping power, excellent workmanship, allow it to “sound” today. In addition, its parts, machined from the best steel, willy-nilly, inspire respect in comparison with the new-fashioned receivers made of aluminum alloy.

Note that almost a contemporary of Tommi-gana, the M-1 carbine, is still selling well in the US market and has gone through several upgrades. However, it is not like cheaper.